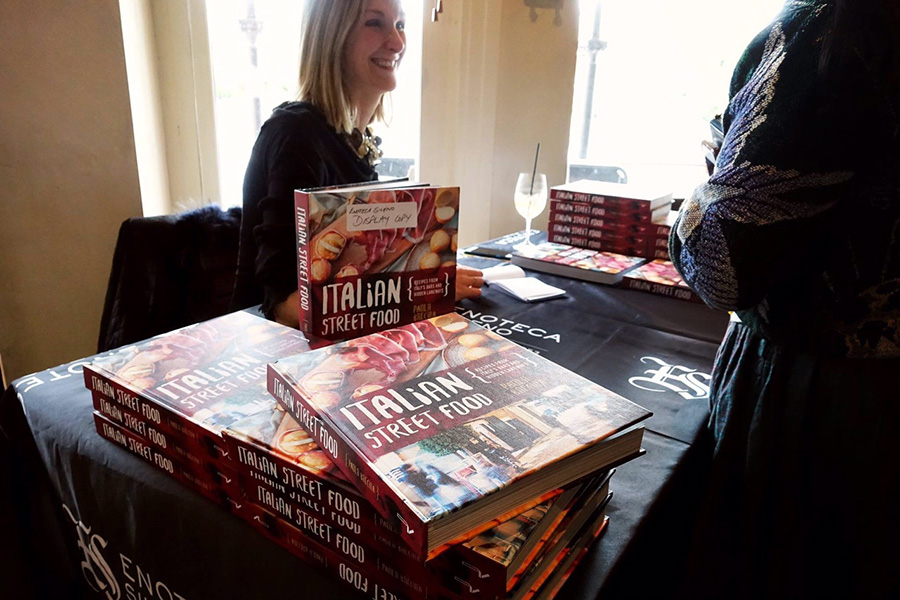 The last couple of months have been breathtakingly busy. Between cooking classes in my home, launch events for my cook book Italian Street Food, days in the office and spending time with mamma while she was recovering from a bone fracture, I have barely had the time to cook at home. Book sales are going very well (it is currently being reprinted!) and my launch party at Enoteca Sileno on November 5th was fantastic. I didn’t get time to take any photos once the event started, but luckily my friend Dean from Bar’d Up did (that is Dean next to me in the photo below holding the book). Ubaldo and the team served up glasses of D’Adami Prosecco and Spritzes made with Amara rather than Aperol (and they were amazing, I think I had at least 5 of them…). The Italian street food catering was by Dario from L’Arrosticino Stick on Grill and included panino con porchetta, arancini, cono di pesce fritto and rhum baba’ with gelato (all recipes from the book) as well as a selection of olives and salumi. 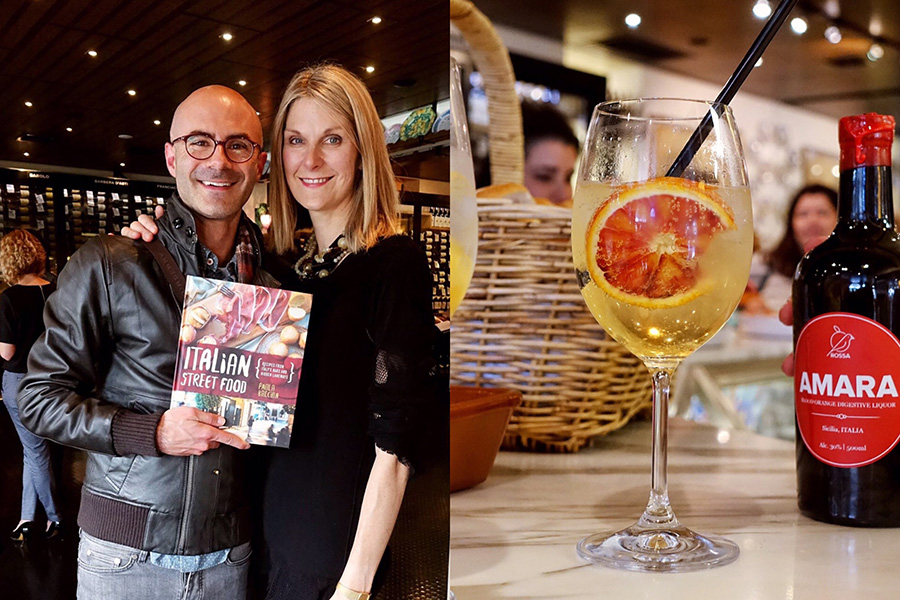 The only thing missing from my launch was my gorgeous mamma, who was in hospital (but is thankfully home now) and to whom I have dedicated the book. Thank you so much to everyone who attended the event and joined in the street food fun and a special thanks to Dean for the photos of the book launch in this post. 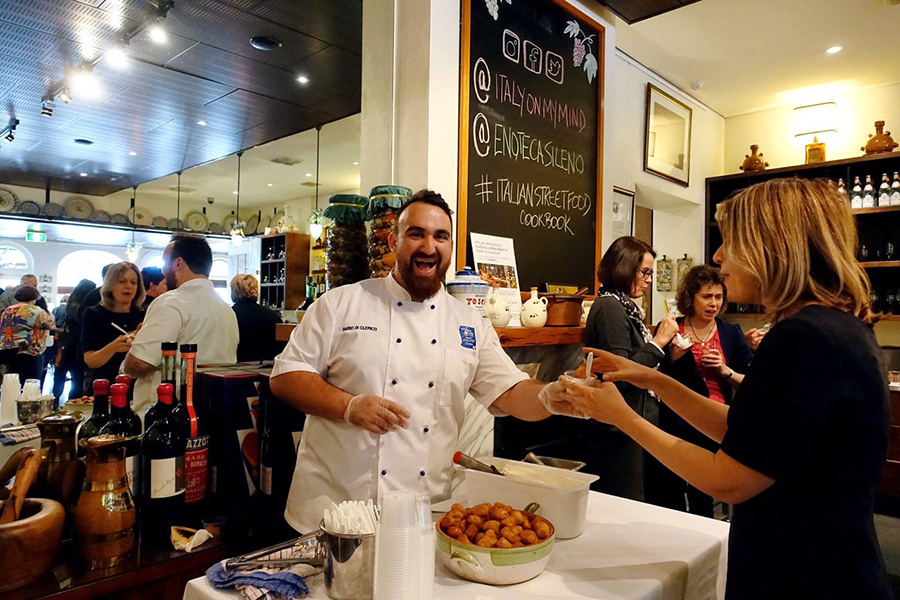 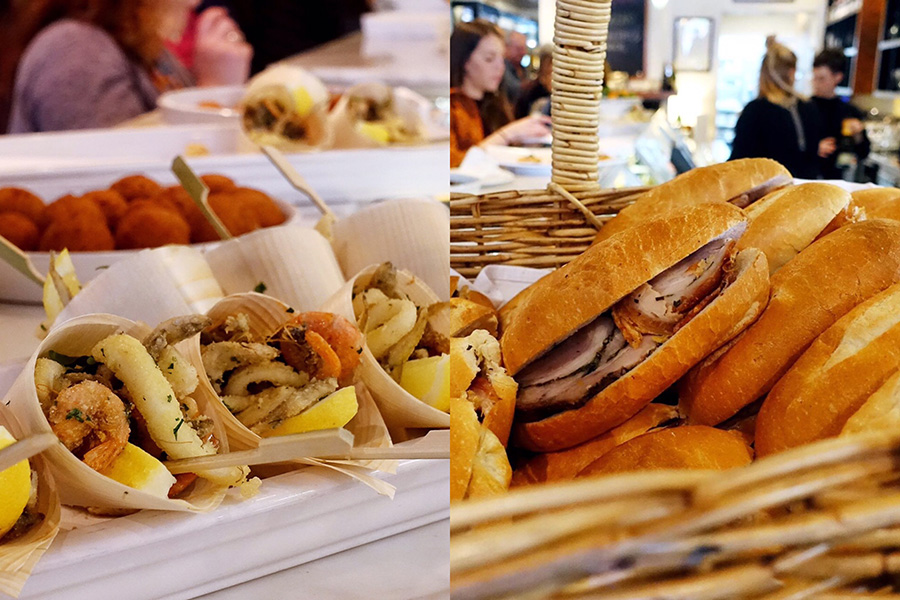 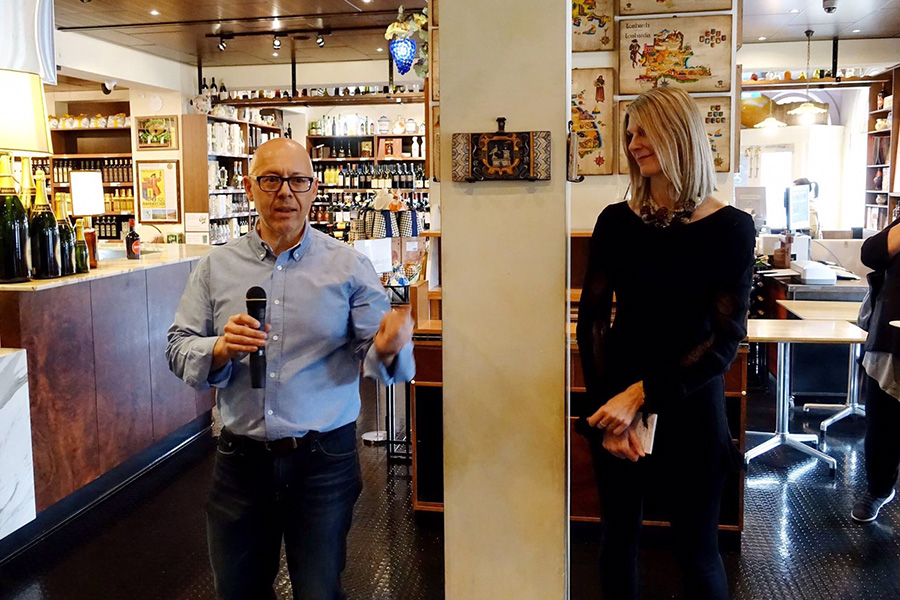 There are a few more promotional events in Melbourne in December that I am very excited about:

I am absolutely delighted that both Sandra Foti at Piccolina and Anthony D’Anna at Boccaccio have agreed to stock my book in the lead-up to Christmas (and yes it makes a GREAT Christmas present).

And Christmas is coming at us faster than you can say Buon Natale. I was in Italy for Christmas last year researching “Italian Street Food” and this year I am looking forward to relaxing a bit over that period, especially because I will be finishing up one of my office jobs in late December to devote more time to my blog, my cooking school, book writing and photography. I cannot wait to finish up work and start researching my second cookbook, in the lead up to travelling back to Italy in March 2017. I have also scheduled more cooking classes – click here to see what classes I am running in the next few months.

As I have been so busy I have not been in the kitchen very much. But with the weather warming up in Australia, I have made enough time to try out a delightful yoghurt gelato using a recipe that I got from the Anna Tasca Lanza Cooking School. The food that emerges from the kitchen of the cooking school is consistently good, and uses almost all local ingredients, often produced on the property. Several smiling Sicilian ladies work in the kitchen, and one of these is Enza, a very sweet and quiet master cake and biscotti maker. When I was there in September, one of the American couples who were part of the group, after tasting another delicious breakfast cake jokingly told Enza that they were taking her back to the USA. She doesn’t understand English so I translated this for her; and she laughed until I said they were actually serious. She then looked slightly alarmed and said she wasn’t going anywhere! I think they probably were half-serious, because Enza is that good. 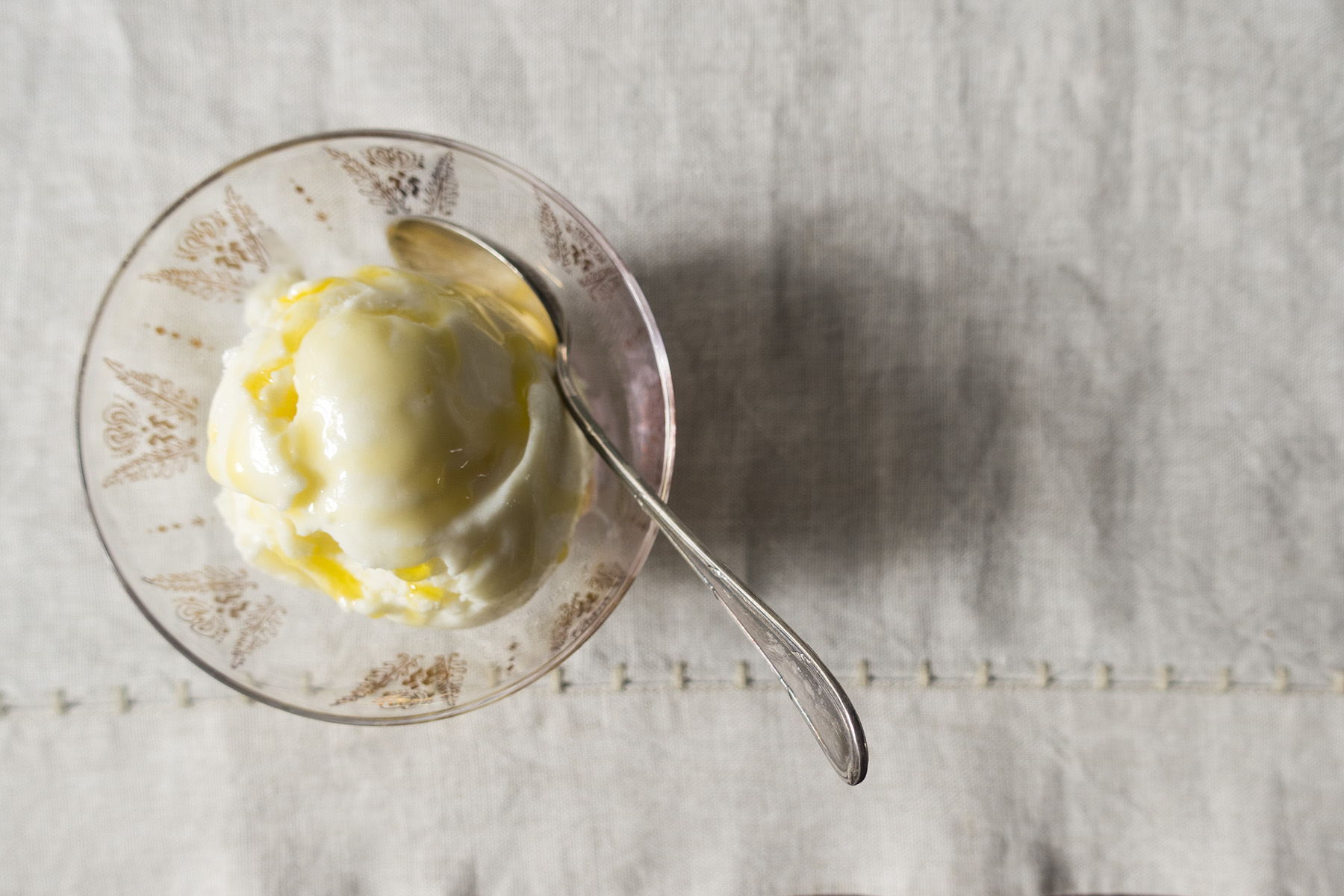 One of the simplest items to emerge daily from the kitchen was the fresh home-made creamy yoghurt that appeared in a large colourful ceramic bowl. We would scoop some fruit preserve onto it or eat it on its own, perfectly sour, rich and satisfyingly creamy. One step above the yoghurt, was the lemony yoghurt gelato that was served after dinner one evening, drizzled just before serving with extra virgin olive oil. I kid you not –  a stream of golden EVOO was poured liberally on top of the gelato. It sounded a bit odd to me… EVOO and gelato. I had never seen it before, and had certainly never thought of it. But it worked, it REALLY worked. The EVOO they use at the cooking school is excellent quality and this was the key. I have made the time to make this gelato at least three times at home, using Greek yoghurt, the best that my local shop sells, plus organic lemons from mamma’s garden. And the best EVOO I can afford; my current favourite is La Poderina Toscano – Olio Extra Vergine Seggiano DOP, fruttato medio. A couple of baby basil leaves or mint leaves wouldn’t go astray as garnish on this gelato either. 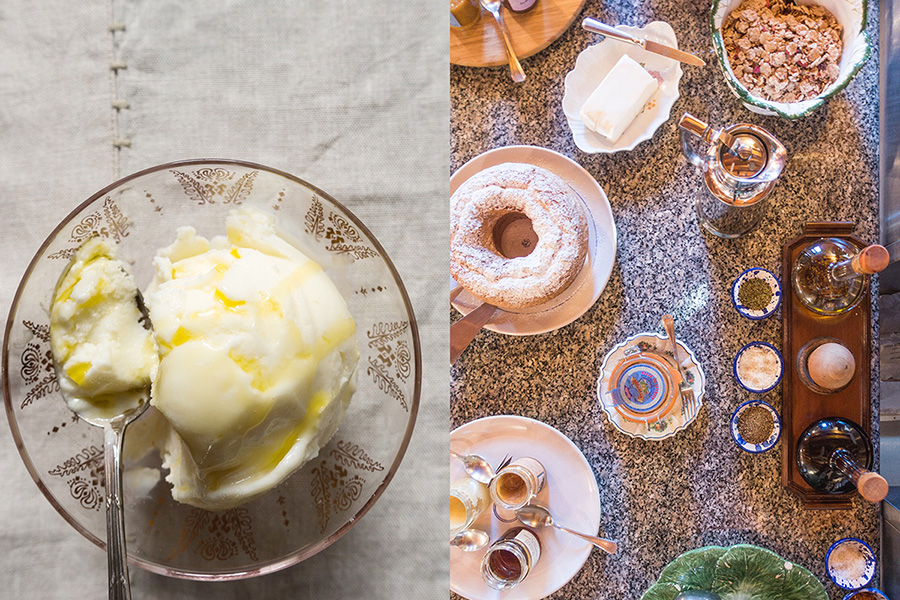 Mix all the ingredients in a large bowl, then place in ice-cream maker for 35-50 minutes until churned. Place in a lidded container in the fridge for at least 30 minutes before serving. Serve in a cup or fancy glass, drizzled with excellent quality extra-virgin olive oil.