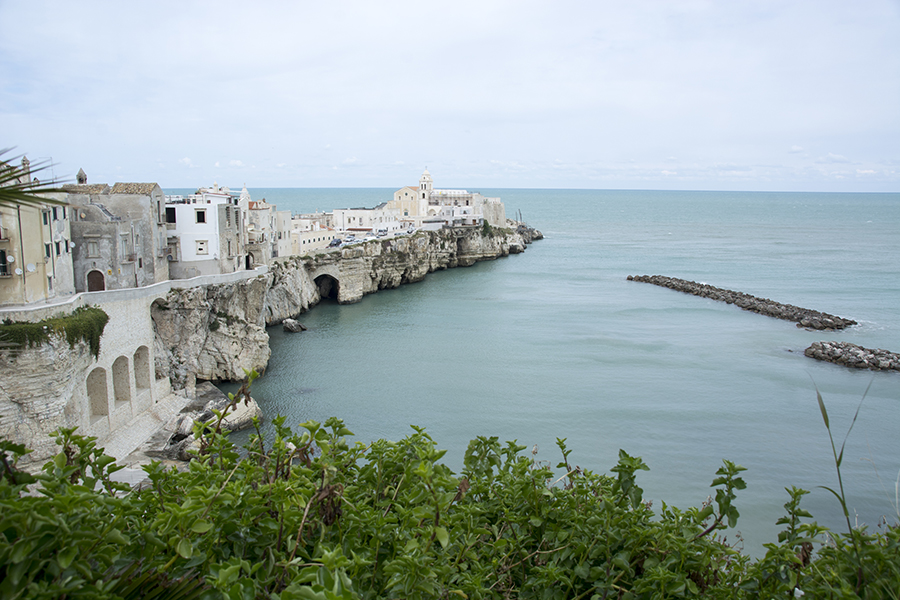 There are parts of the Adriatic coastline that I know very little about; the Gargano Peninsula in the northern part of Puglia was just one example. I had never heard of it and I was even unsure of how to pronounce it (tip: the accent is on the second “a” not on the first one). My friend Joe told me about the Gargano when we met one morning for coffee and cake at the Mediterranean Supermarket in Brunswick. He is from the Gargano and passionate about the area. He described its uniqueness, the beautiful coastline and waters, the towns of Rodi, Vico, Manfredonia, Vieste, Peschici and the typical foods that are made there as I took notes. He implored me to try Caciocavallo podolico (a local cheese) and gave me the details of his friend Maria Antonietta who grows the Carpino broad bean (fava bean), which has its own Slow Food Presidium.

We arrived in the Gargano from the south after a week of cooking in Otranto, driving along the coast, past olive groves and artichoke plantations. White walled towns dotted the landscape on our left, and the blue Adriatic Sea was on our right. The Gargano peninsula is often missed by visitors as it is not on the way to anywhere, but a destination in itself. I hope you will see from some of the highlights of my week there that it is well worth getting off the main road and spending time on this beautiful peninsula.

I booked the stunning Villa Manganaro for three of our nights on the Gargano as a base for exploring the southern part: a pink villa built in 1850 sitting among olive trees, with a terrace that has an unimpeded view of the Adriatic Sea. The owner Lucilla told me that the turrets on either side of the entrance were for guards to put their rifles into, to protect the property. Lucilla took us on a tour of the house (as no-one else was staying there at the time) and one of the rooms had black and white hand-painted tiles, all different depicting scenes from Greek mythology – very rare and they were recently individually photographed for a book. 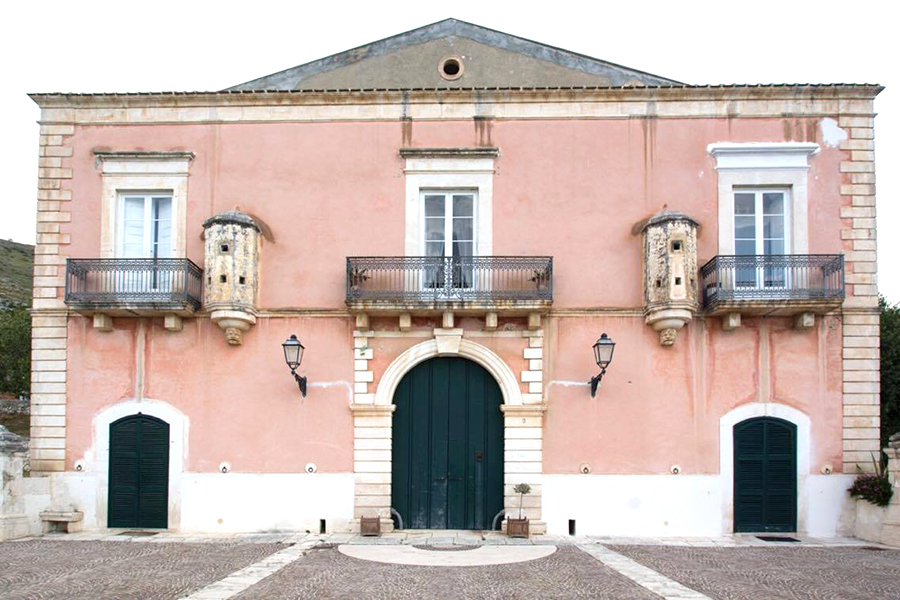 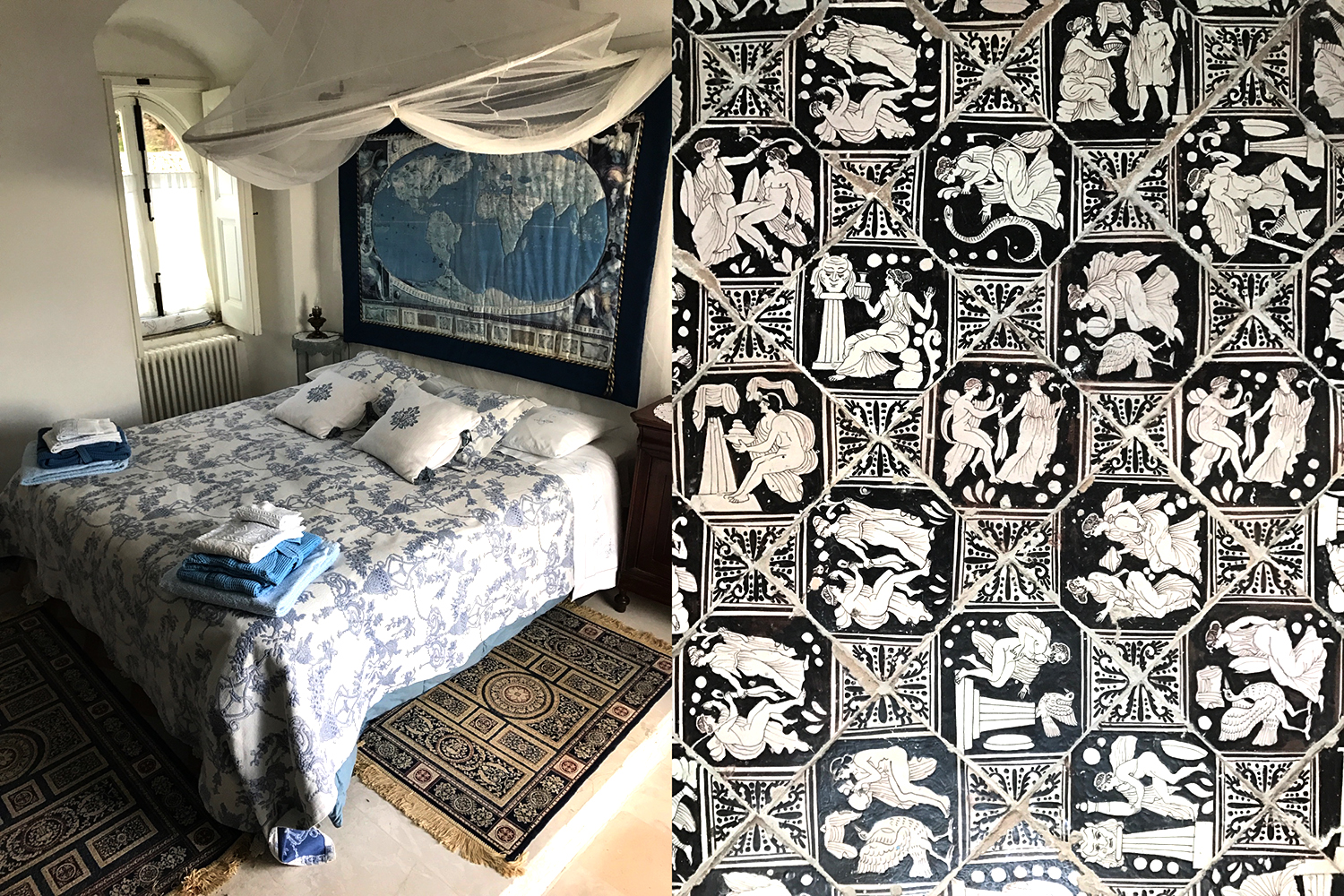 We drove to the town of Vieste, on the tip of the peninsula. It looked like it would be a buzzing town in summer, with sandy beaches and rows of beach clubs. It is well worth walking through the town to get to the coastal view from some of the terraces (the photo at the start of this post is taken from one of these). We ate at Ristorante al Dragone, which is set into a cave. Highlights include squid ink pasta and a hazelnut semifreddo drenched in chocolate that I am still thinking about. 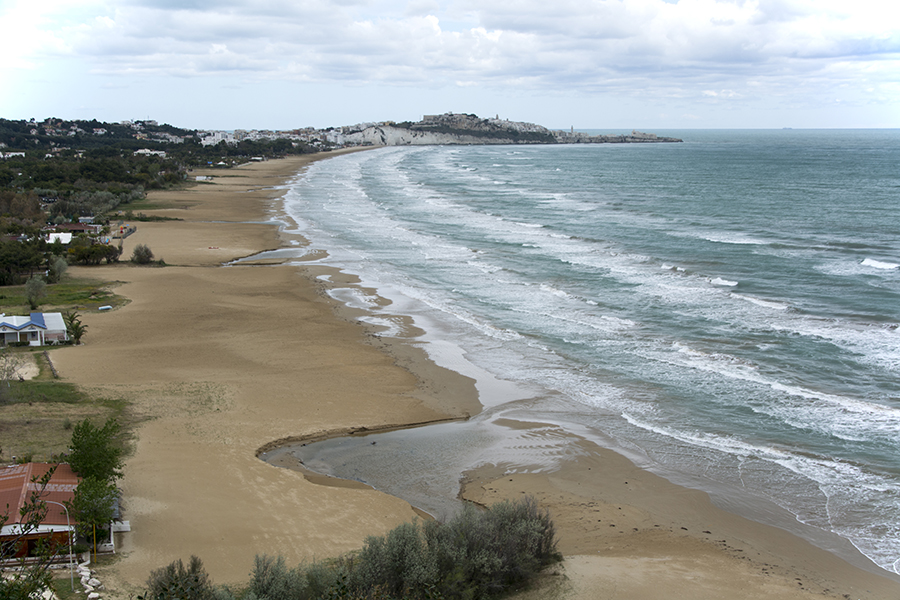 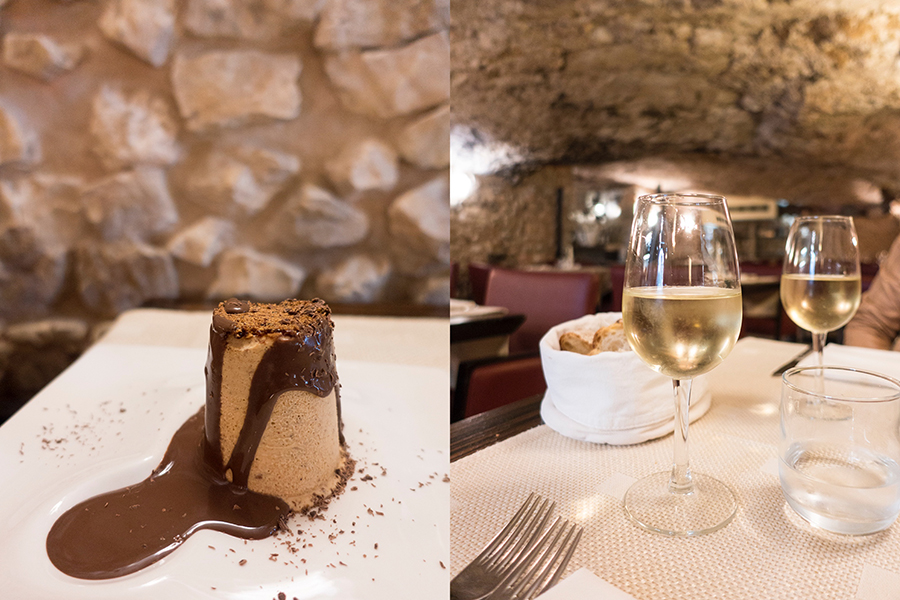 The town of Monte Sant’Angelo is set on a hill, looking out to the southern coast of the Gargano peninsula; be prepared for steep zig-zagging roads to get to it. It is frequently visited by pilgrims, as it is believed that Saint Michael appeared there several times in the 11th century. Although we didn’t spot any angels, there were plenty of priests and somewhat surprisingly, snow, when we drove in. We sought refuge in Ristorante al Medioevo, a restaurant serving traditional dishes with a twist. A highlight was the orecchiette pasta served with lamb, tomatoes and rocket from the Gargano, a particularly peppery salad green with spear-shaped leaves. 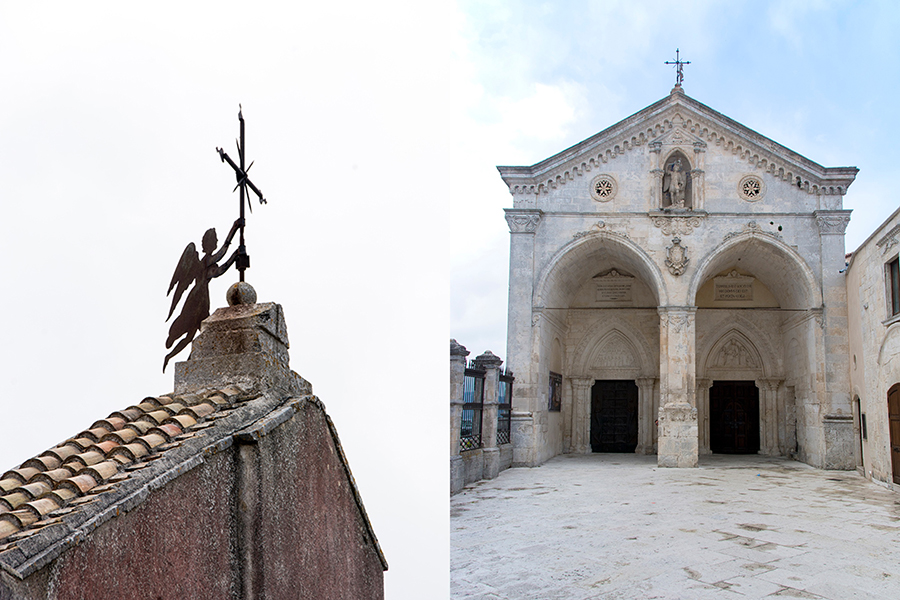 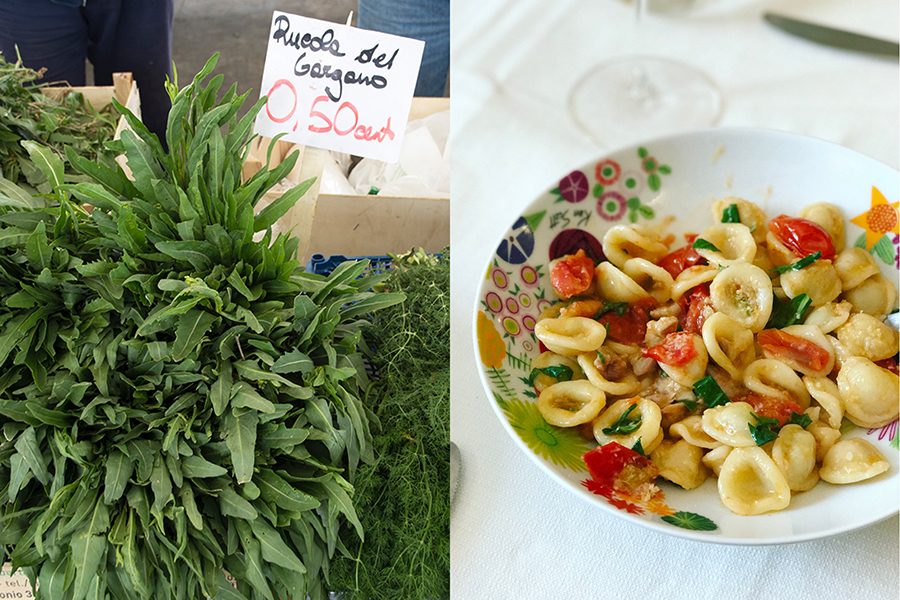 The fresh food market in Manfredonia was lively, loud and lots of fun. Sellers took great amusement in the fact that I was taking photos: some yelled at me, others posed and smiled and others just laughed. The produce was fresh and seasonal: there was plenty of fish, greens like broccoli rabe and chicory and bunches of asparagus. 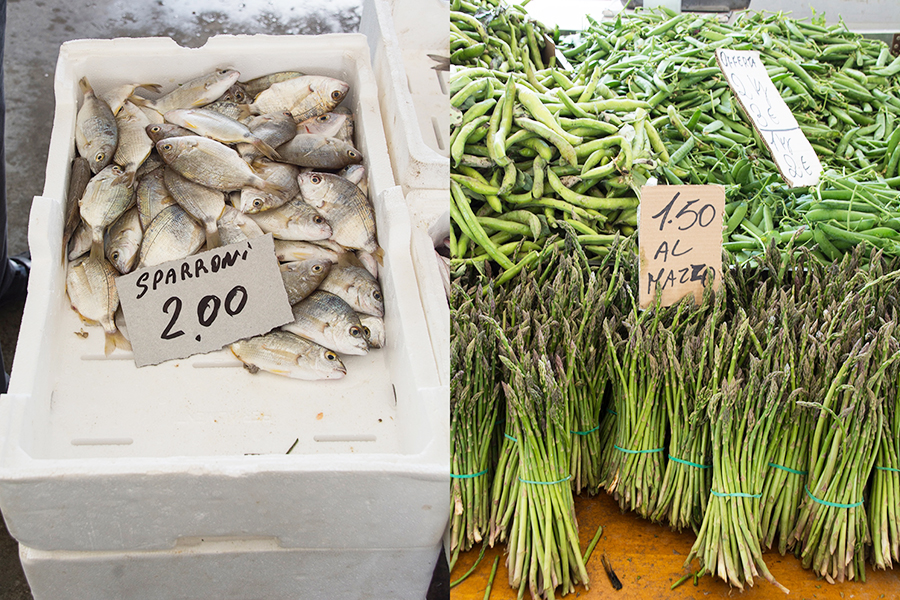 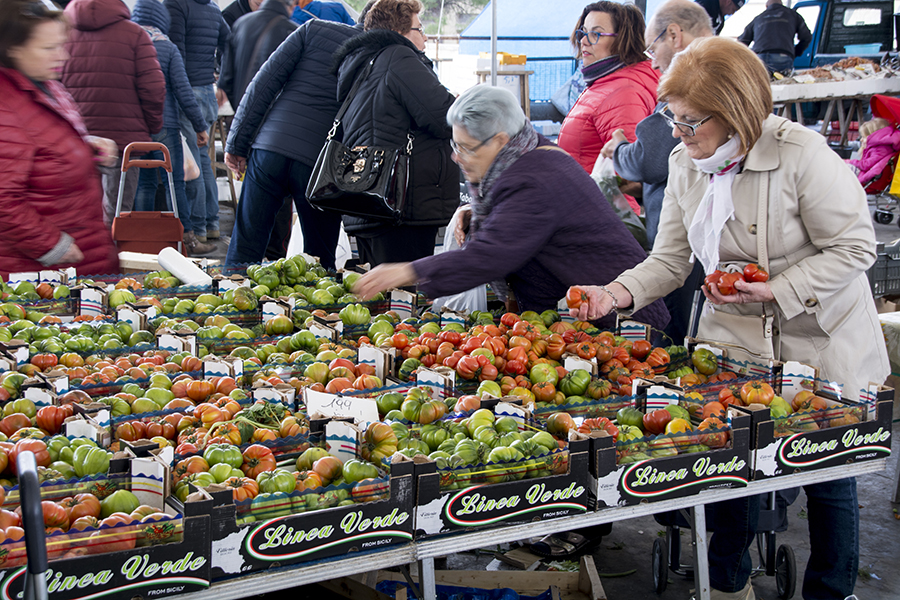 Our next accomodation in the Gargano was in Vico, a medieval village on the other side of Mount Gargano and closer to the Northern coast. We were staying in the historic centre of town, a picturesque spot but it was early in the tourist season and unseasonably cold so quite empty. We took refuge from the cold in the only open restaurant, Osteria da Miky. The owners not only served a huge spread of home made food (we’d only asked for a glass of red wine and a snack), they also sat down for a chat, poured more wine then brought out their homemade liqueur. Mike took us on a tour of his restaurant (which was over several levels) – it has a courtyard that would be just beautiful in summer. 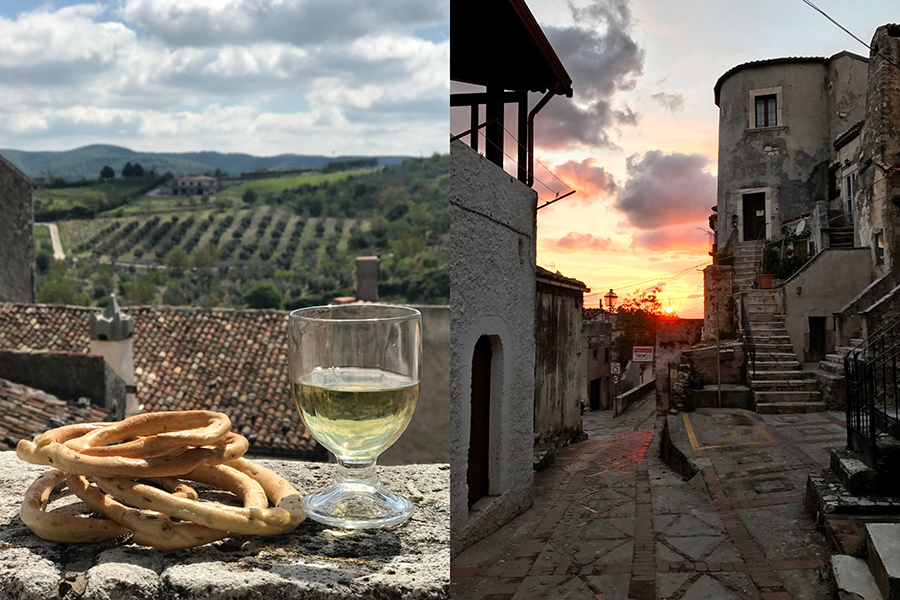 It was clear and warm on the day we drove to Peschici along the northern coast of the peninsula. The coast road had spectacular views and we could almost see the Tremiti Islands from the coast (sadly we couldn’t get there as there were no boats running on that day). Peschici is a gorgeous sunny town with white houses lining the bay, sandy beaches and on the day we were there, there were street stalls in town selling fresh food. I bought a caciocavallo (the cheese Joe had been talking me about) from a young man who had opened shop from the back of his van. He was also selling cacioricotta, ricotta and mozzarella; the lady standing next to me told me it was made with the milk from the cows owned by the family, not too far from Peschici. 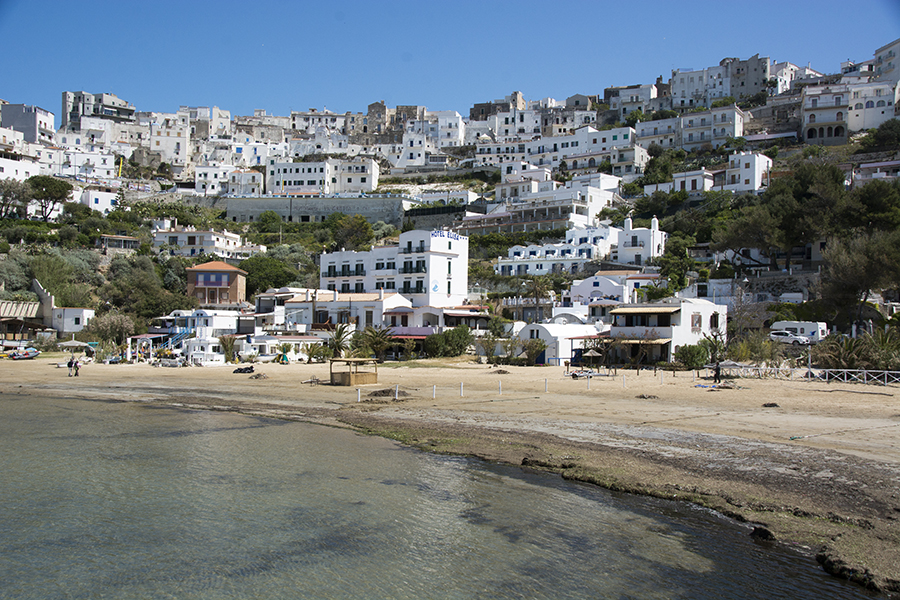 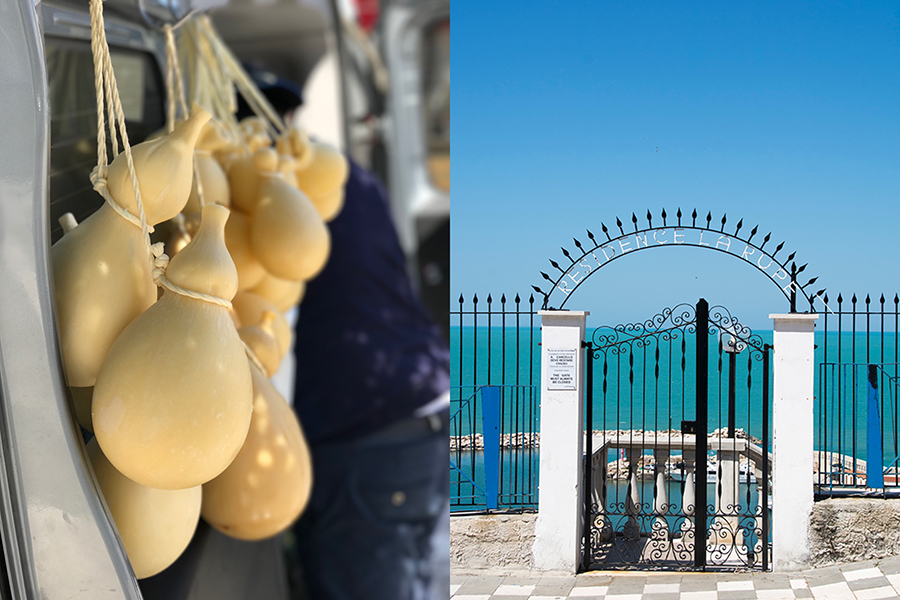 I went to visit Joe’s friend Maria Antonietta and spent a few hours with her and her husband Michele at their farm at Rodi, learning about the particular fava bean that they grow called Fava di Carpino – a small, delicate bean that is used dry (rather than fresh). Maria Antonietta went into great detail explaining the traditional harvesting method that includes: cutting the plants with a scythe; tying them in bundles to be dried in the sun; then at the festa delle pesature in July, the dried plants are crushed by horses’ hooves, separating the beans, which are then collected, allowing the dried plant to be carried away by the wind. She also made me a plate of fave e cicoria (fava beans and chicory, a typical dish and very filling; it is somewhere between a soup and a puree’), dressed with her own Cannarozzi organic extra virgin olive oil – it was absolutely delicious. She gave me a bottle of oil to take with me (that I used for the rest of the trip – dousing it on everything I prepared in the apartments we were staying) and some dried fava beans so I could make my own fave e cicoria (which I did, to much fanfare from Mark). 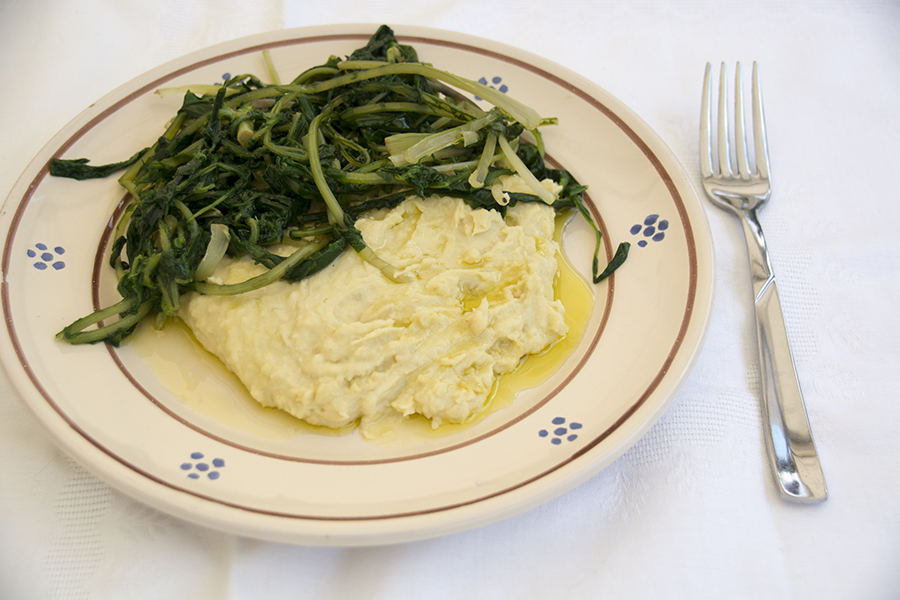 There were many other memorable places (and recipes) that I will share with you over the coming months – there is far too much to include in this post. I don’t know why I waited so long to visit the Gargano – I felt so very welcome there and everyone I met, when I told them I was writing a book about the food of the Italian Adriatic, were generous to a fault. And the food was fresh and just wonderful. Grazie mille Joe for your fabulous tips! 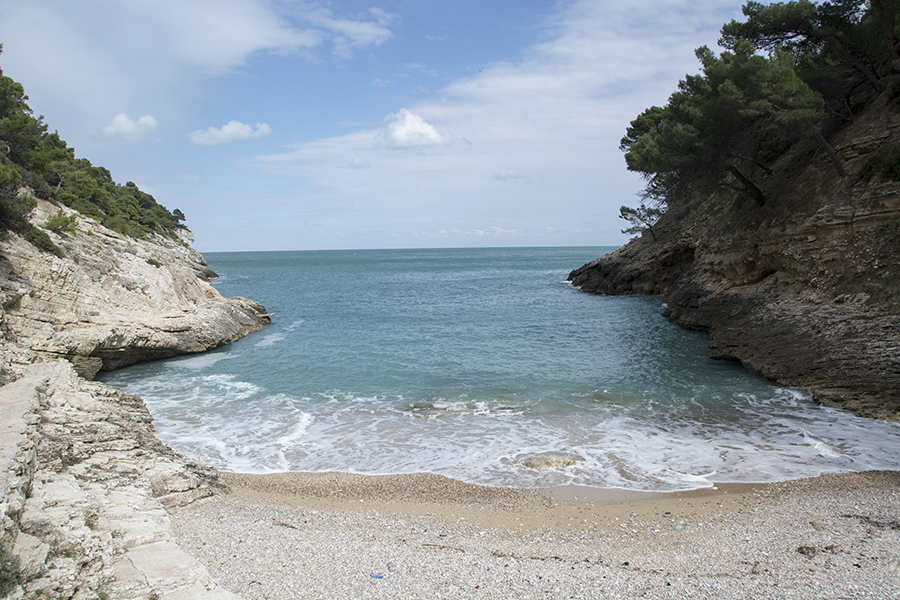