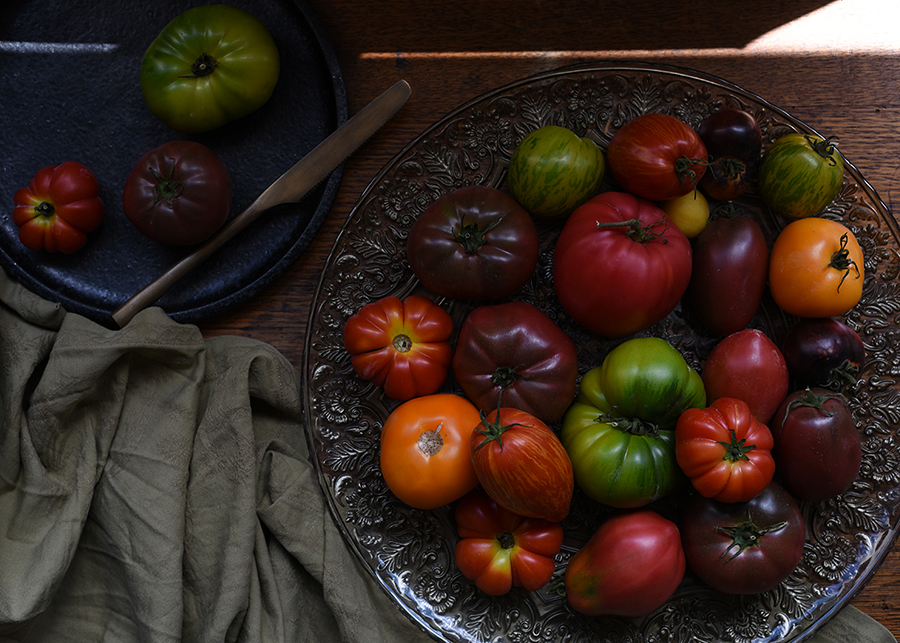 I miss the tomatoes my father used to grow. Dense, sweet, red fruit hung on dozens of vines that were well over 170cm in height. He would prop them up with old wooden stakes that he would retrieve in late spring from the locked cubby hole under the back stairs where they had sat since last summer. He would hammer them in to the earth using a large mallet, tying up the growing vines with strips of old fabric, remnants of mamma’s old sheets. There they would grow, straight and tall, helped along by his expert pruning. You could smell the tomatoes growing from the back door of the house, the sweet and herbaceous scent of summer. Between the tomato stalks, papà would plant leafy basil bushes, telling me they brought out the best in each other not only on the table but in the garden. My favourite summer meal was a toss up between pasta puttanesca, made using freshly picked tomatoes and torn basil and insalata Caprese, layering fresh mozzarella with slices of tomato and basil leaves and dousing the lot with good quality olive oil.  Mamma would turn the excess basil into pesto that would be reserved for use throughout the year, and preserve many kilos of tomatoes by slow-roasting them and placing them in jars with garlic, oregano and olive oil. 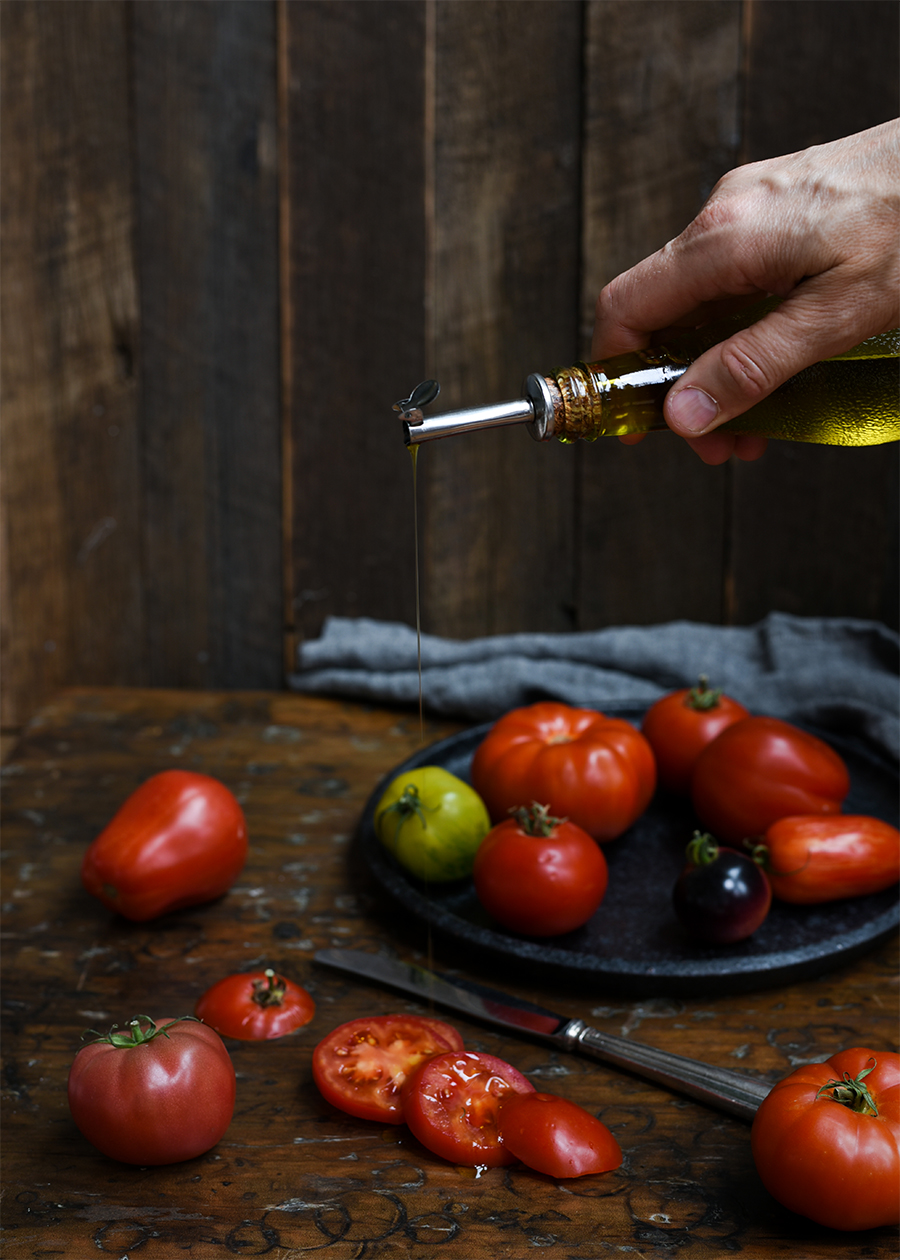 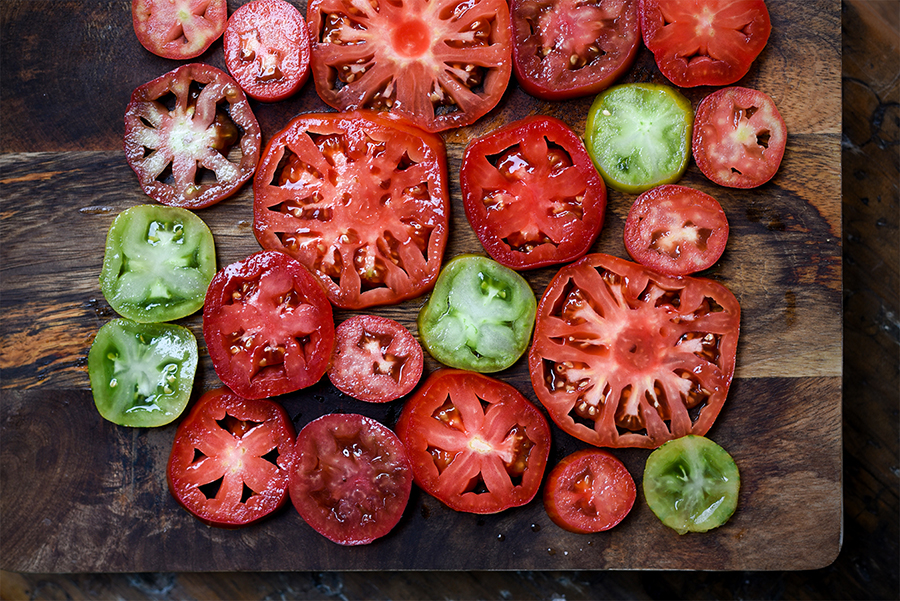 Papà would grow his tomatoes from seeds, planting them around October and keep them in a small hot house in the brick paved part of the garden. He would look after them carefully, watering them with a miniature watering can and make sure they were in the best position to catch the Spring sun. He would label each of the seedlings and then plant them in the garden once they were 8-10 cm tall. One year he had decided to grow cherry tomatoes, which were much easier to manage as they did not need staking. Much to his surprise one of the plants grew yellow fruit, small elongated ones. Papà treated them with some suspicion, as he was sure that the seeds were meant to produce red tomatoes. We left them on the vine, ignoring the sweet yellow fruit as a curious mutant. I too was surprised – I thought all tomatoes were red (much like all carrots are meant to be orange). Of course this was in the days before heirloom fruit and vegetables became common place.

I love that we can now so easily find a variety of tomatoes: purple black, green, yellow and striped in all sorts of shapes and sizes. They look so colourful in the fruit shop I have been known to buy a lot more than I need. And the taste is very good, though I must admit to always being slightly disappointed. They taste good, amazingly good in comparison to hot-house tomatoes you buy in winter, but not quite as good as the backyard tomatoes of my memory. Or maybe it is just the nostalgia of those plump, sweet homegrown tomatoes, eaten at our family table with my father proudly looking on. 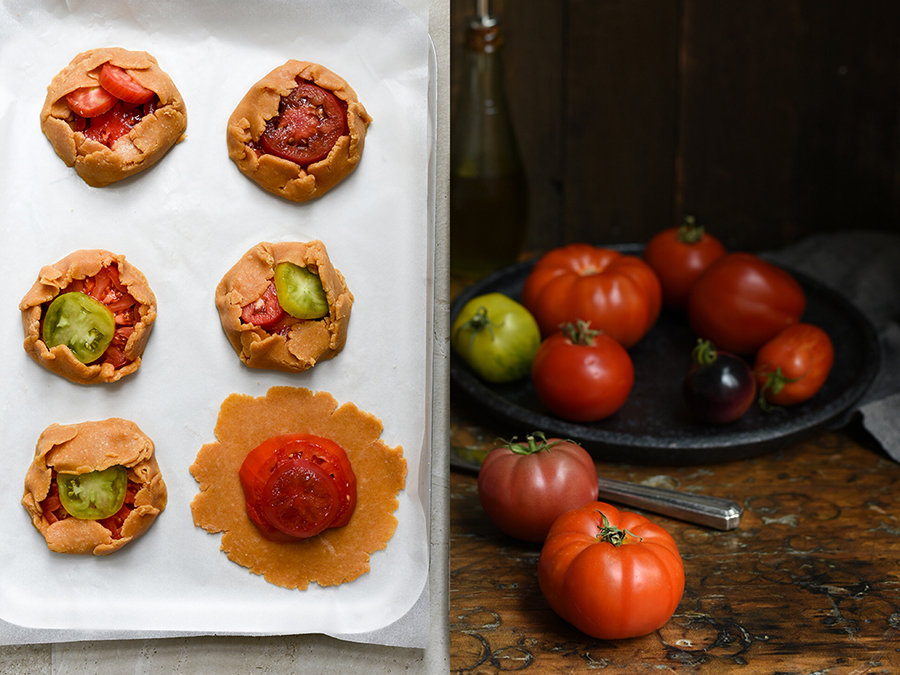 Last week was one when I bought a box of colourful heirloom tomatoes, well in excess of what I needed. I ate them in salads, sliced on toast, with buffalo mozzarella every day. I also turned several into very rustic hand pastries (called that because you can easily hold one in your hand); I wrapped up slices of tomato with buttery short crust pastry made with spelt flour. I added some grated parmesan to the dough, that gave it a lovely saltiness that worked well with the robust spelt flour. You could easily use white flour (or wholemeal) or a combination of flours; the pastries will probably look less rustic (read: neater) than mine. But they made lovely appetisers; the naturally sweet in season tomatoes are so tasty. I could imagine taking these to a late summer picnic to share with friends; holding a tomato pastry in one hand and a glass of Prosecco in the other. I wonder what my papà would say, if confronted with a green tomato on a pastry. I am pretty sure he would have got over his suspicion of non-red tomatoes and enjoyed it very much. 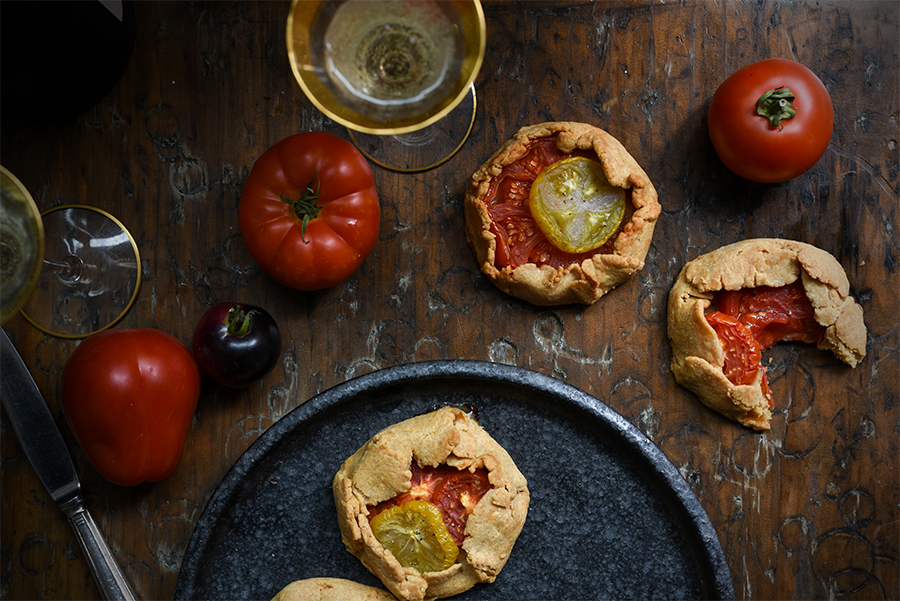 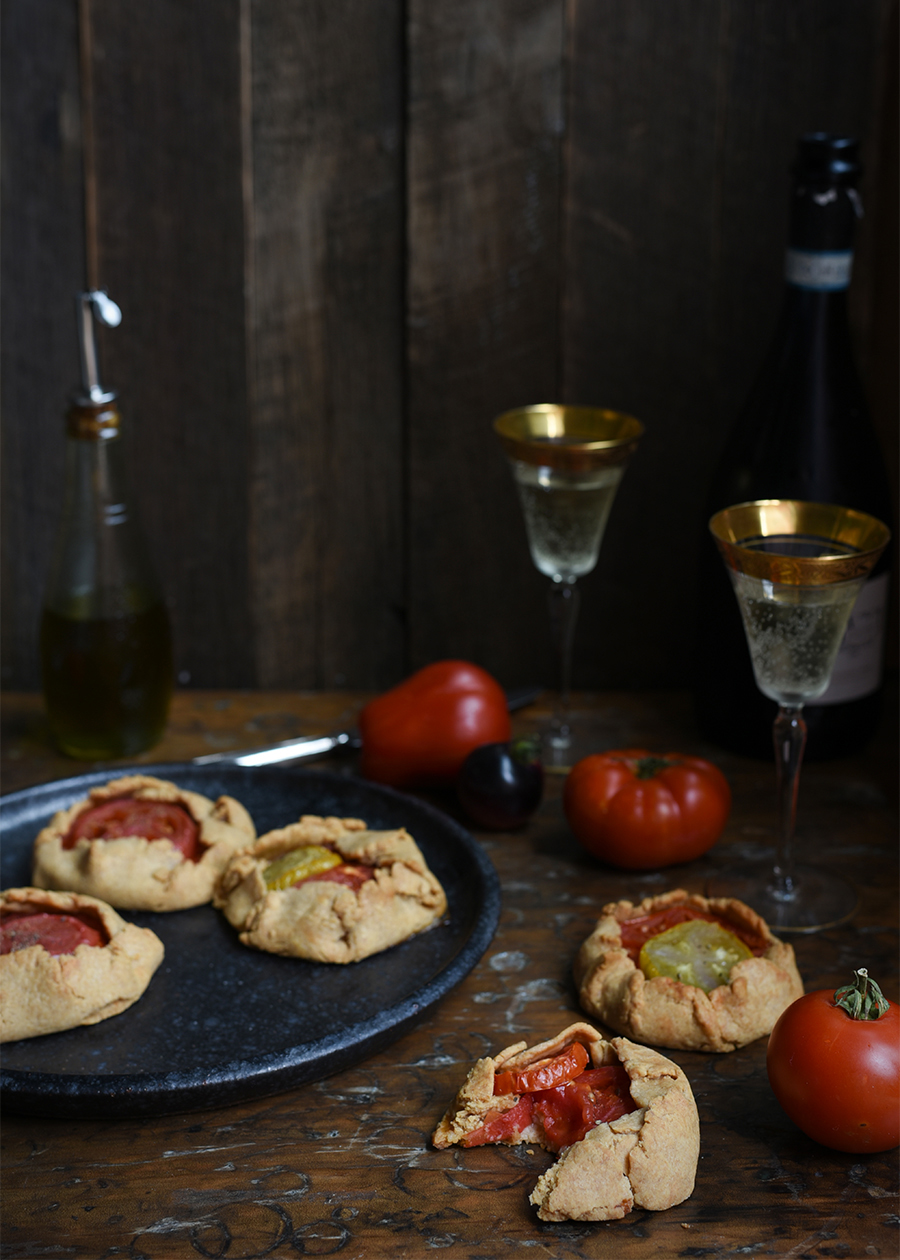 In other news….I have started selling places to my 2018 Trieste Tour, which is running from 25 September to 30 September 2018. If you would like spend time in this beautiful town (and my second home), and the surrounding area, tasting the delicious local foods at farms, trattorie and osterie, drink the local wines and enjoy tours of local producers, a day across the water to Muggia and a day over the border into Slovenia, please have a look at my tour page. Local expert Massimiliano Milic and I would LOVE to show you around X

Place the flour, parmesan cheese and salt in a large bowl and give it a quick whisk to combine. Crumble the cold butter into the flour with your fingertips, working quickly so it does not melt, until it resembles wet sand. Add the egg, and bring the dough together. Add a little bit of milk if needed for the dough to clump together into a mass.Divide into six equal pieces and flatten them into discs with the palm of your hand. You can either put the discs, covered in cling film in the fridge, or else roll them out quickly into large circles (10cm diameter) with a rolling pin. Place a layer of cling film between each of the discs, cover and then refrigerate for 30 minutes.

Preheat the oven to 180C and line a baking tray with baking paper. Cut your tomatoes into slices about 3-4 mm thick and set aside. Remove the pastry from the fridge, and roll them out into circles, about 10cm in diameter (if you have not done so already). Place the pastry circles on the tray, well spaces, and place a couple of slices of tomato on each circle. Carefully fold the sides of the circle inwards so that they partially cover the tomato slices.

Bake for 30 minutes or until the pastry is cooked through and the tomatoes are softened. Allow to cool to room temperature, and scatter on cracked black pepper and salt flakes to taste before serving.

Hand pastries will last for a few days covered in the fridge. 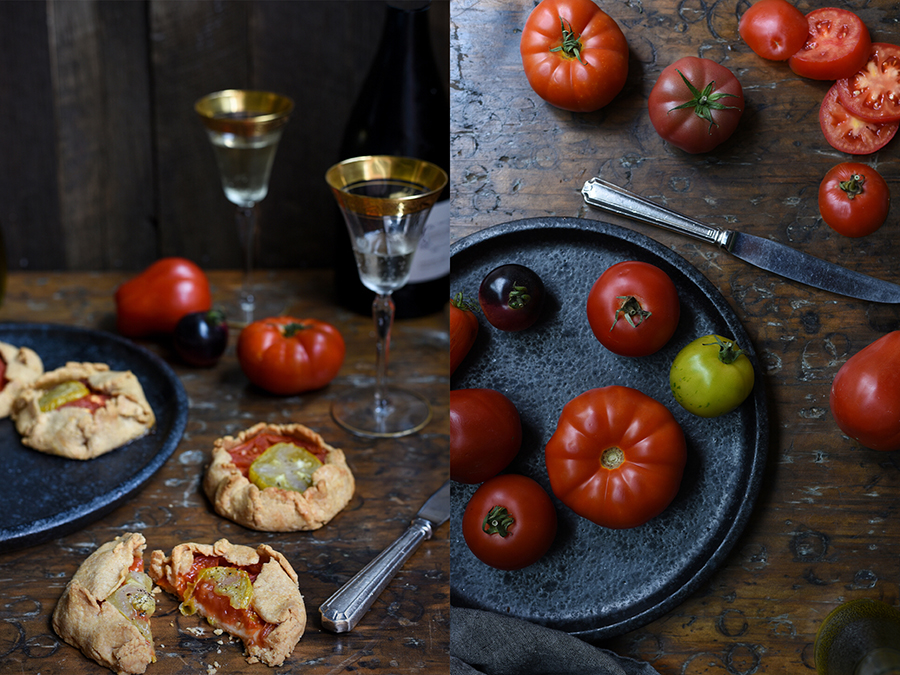