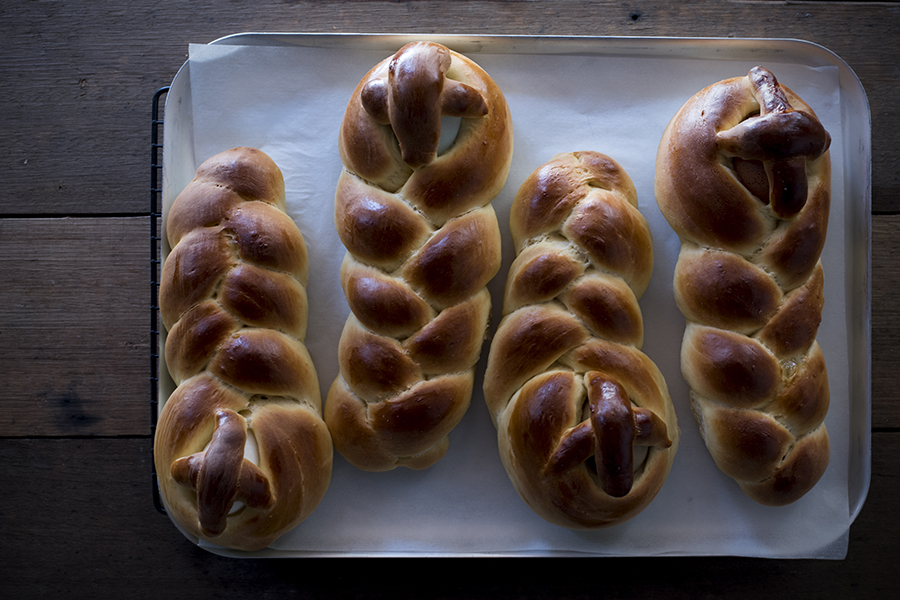 On some days in Melbourne it still feels like summer, with the sun beating hot around lunch time. It feels distinctly odd to think that it will be Easter Sunday tomorrow; it has come around so early this year and I am sitting here writing this blog post in a summery cotton frock at a time when I should at least have shirt sleeves on. Thankfully the nights are cooler and that puts me in the mood for baking. This year mamma is coming over to my house for Easter Sunday lunch; it is so long since she was here; I have a multitude of stairs and I do worry about her climbing them though she assures me she will be fine. So I am planning a special lunch and on the menu will be a Pinza Triestina, a type of sweet Easter bread a bit like a brioche. I was in Trieste this time last year and think I ate close to my body weight of pinza. I am yet to find a good one in Australia and my attempts at making one myself had failed (ok, I tried it twice but was mixing everything by hand in an Air BnB apartment with a gas oven). I also saw titole in the windows of pastry shops in Trieste in the lead-up to Easter but had eyed them with some suspicion. They had red eggs in them and I didn’t quite know what to do with the dyed egg. So I would buy another pinza from the pasticceria instead. What I didn’t know until recently was that they are both made with the same dough, so learning to make one of them meant I could make both. 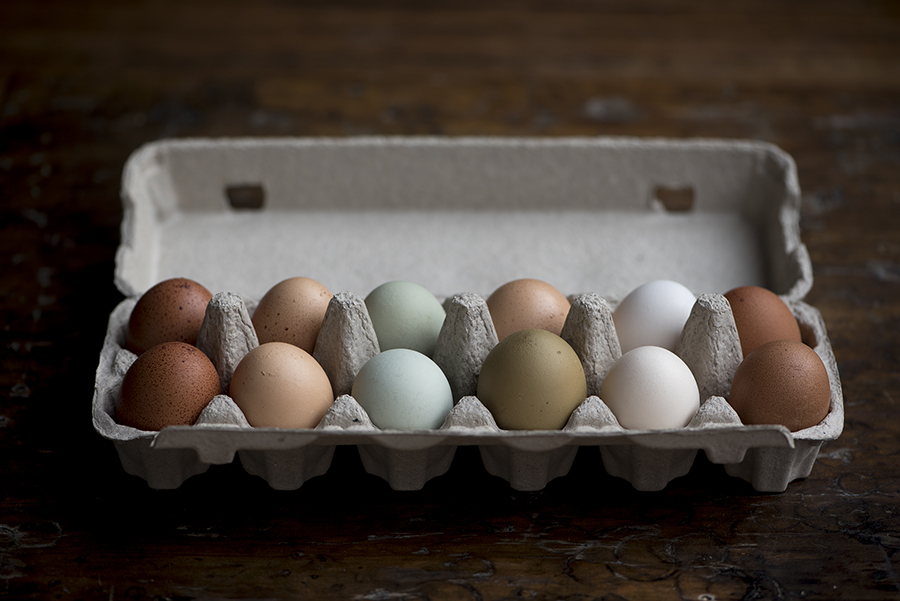 So I chose to make titole instead of pinza because of the most beautiful eggs that a very sweet friend gave me when I met her in Queensland last week (what a great gift – real eggs at Easter). The eggs are from the Good Goog in the Byron Bay hinterland and are different colours (as they are laid by different varieties of hens, a fact I didn’t know). I couldn’t bear cracking the pretty shells (some people on social media had suggested I “blow” the contents through a small hole and keep the shells intact…sounds like rather a lot of blowing if I wanted to keep the dozen eggs intact), so it seemed like a good opportunity to make titole, which have a hard-boiled egg at one end of a plait of dough. It is said that titole are shaped like the nails used on the crucifix and the whole egg, with its traditionally red dyed shell, symbolises the blood-stained rocks on Calvary. Lidia Bastianich (born in the same town in Istria as my father) however calls the same bread “pupi” (meaning “doll”) and she describes them as dolls. I think I like the doll version better, and the rainbow coloured eggs are rather more like doll’s faces than blood-stained stones. 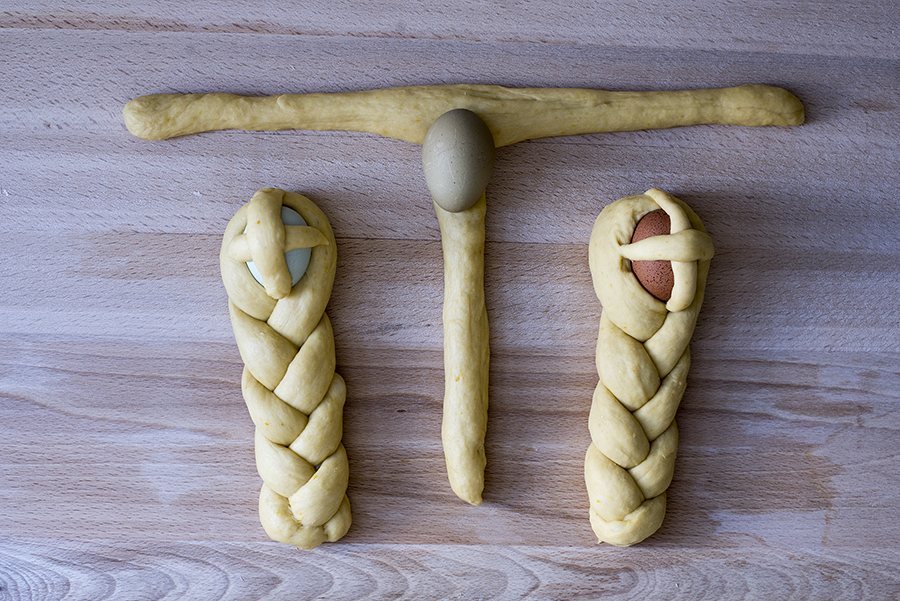 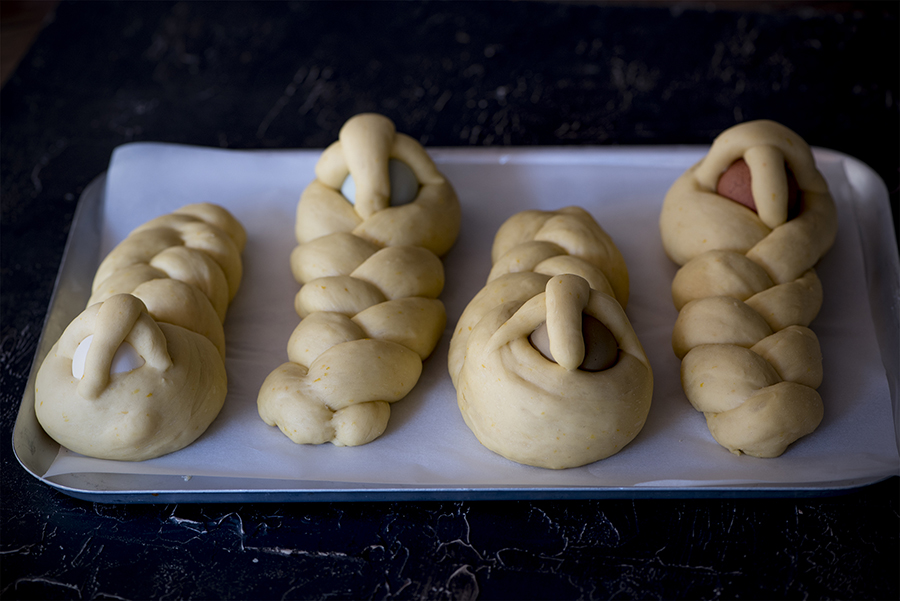 Though the recipe isn’t complicated, it takes a rather long time due to the proving times needed for the yeasted dough. And it is a huge help to have a kitchen mixer with a dough hook; one recipe by Maria Stelvio gives a hand kneading time of one hour (!). I used this recipe from an Italian blog and it is nowhere near as time consuming; I followed it almost as written and am very happy with how it turned out. The dough is soft and not too sweet. I ate a whole one including the hard-boiled egg just after I took the photos. I was only meant to eat the slices I had cut…..I will definitely use the same recipe to make a pinza for mamma ready for Easter lunch, and I may even pop over to her house early today with a titola. She tells me it is many years since she has seen one.

And on that note, Buona Pasqua to you and your families X 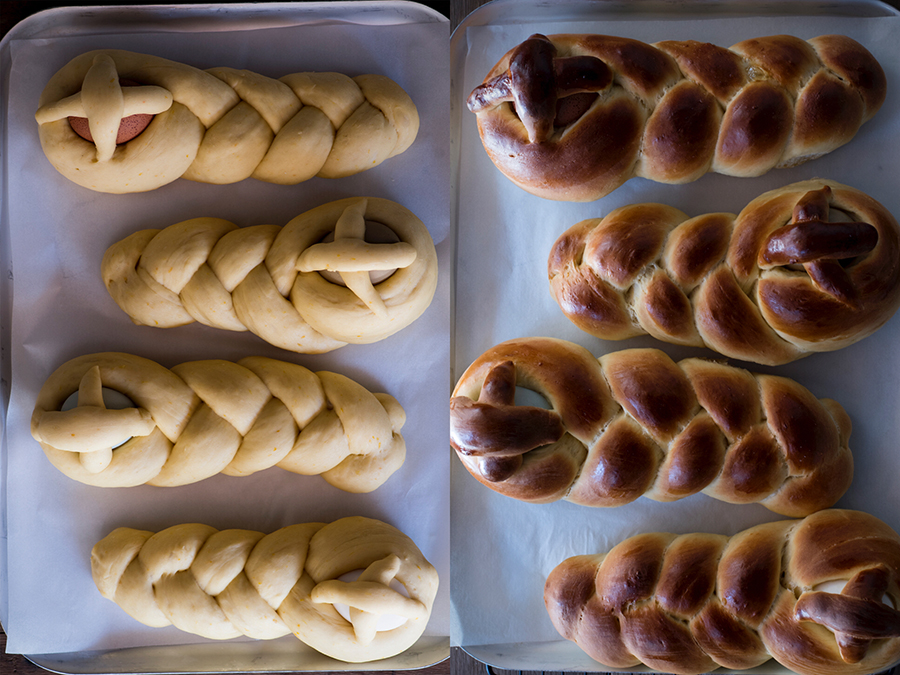 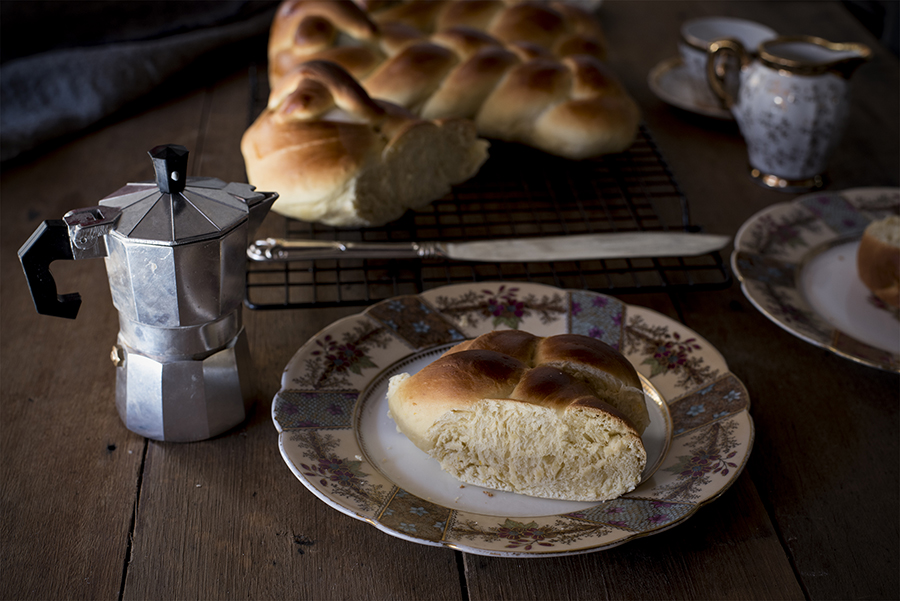 Stage 1: warm the milk in a saucepan on medium heat until it is lukewarm; crumble in the yeast and stir to dissolve. Add 100g flour and 25 g sugar. Mix with a spoon until a cohesive mass forms. Cover with cling film and rest in a warm draught-free spot until doubles in size (about an hour).

Stage 2: Add the following ingredients to the previously made dough in the following order, a bit of each at a time, stirring between each addition: 200g flour, 25g sugar, 15g melted but still warm butter, 1 egg yolk, 1 whole egg. So you will need to add a third of the flour, then stir, a third of the sugar, then stir, a bit of the butter, then stir, about a third of the egg and yolk whisked together, then stir. Then more flour etc until everything has been added. You do not need to be precise, but the ingredients need to be added a bit at a time. The dough will come together into a kind of ball. Cover with cling film and rest in a warm or draught-free spot until at least doubled in size (about an hour).

Stage 3: prepare the following ingredients: 325g flour, 100g sugar, 25g melted still warm butter, 2 egg yolks, 2 whole eggs, lemon and orange zests, vanilla bean seeds, 50g white rum and a pinch of salt. Place the following in the bowl of your mixer in the order described: the flour first, then the dough, the sugar, the butter and the salt. Add one egg yolk and turn on your mixer with the dough hook at the lowest speed (take care that the dry ingredients do not fly out at this stage as mine did!). Add the next egg yolk when the first one has been incorporated, then one whole egg, then another whole egg, mixing the whole time on low speed. Next add the rum, a little bit at a time until incorporated, then the zests and scraped vanilla bean seeds. Increase the speed of the dough hook to the second lowest speed and allow it to work the dough for 7 minutes, until it is smooth and glossy. The dough will be slightly sticky. If too sticky to roll into a ball, scrape it into a lightly floured work surface and bring into together, trying not to incorporate too much flour. Place the dough in a bowl covered in cling film and allow to rest in a warm draught-free spot for at least an hour or until doubled in size.

Stage 4: divide the dough into 4 equal portions (they will be about 270g each). Divide each quarter into two parts, one that is about 185g and another that is 85g. Roll these into thick ropes; the shorter one will be 13-15 cm in length and the longer one will be 26-30cm in length. The shorter rope will form the vertical part of a large T and the long row will form the horizontal part. Place a hard-boiled egg at the join (see photo above) and start folding the ropes over each other to form a plait, breaking off a small piece of dough before tucking the three rope ends under themselves. Roll the small piece of dough into a thin rope and form a cross over the hard-boiled egg (optional). Lift carefully and place on a large lined baking tray. Repeat with the other three portions of dough. Cover the four titole with a clean tea towel and place in a warm draught-free spot until they have risen for an hour.

Stage 5: preheat the oven to 180C. Brush the four plaits with the reserved egg white. Bake for 20-25 minutes until a deep golden and a skewer inserted comes out clean.