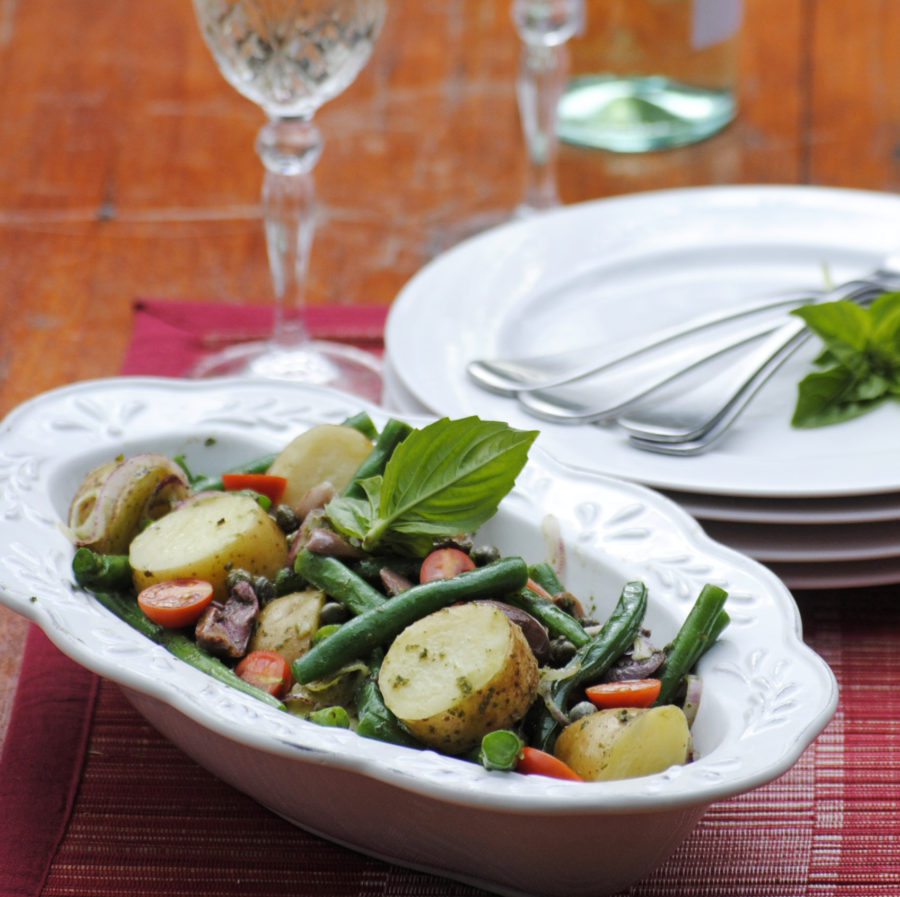 A Melbourne Food and Wine Festival event took me to Bonegilla last weekend for the first time. Readers who are not in Australia (and even those who are) may not have heard of this place, which is about 300km from Melbourne on the shores of the Hume Weir. But for over 170,000 predominantly European migrants in the period immediately after World War II, it was their first temporary home in Australia. My parents arrived there in May 1950 but their journey began many months before that in Italy. 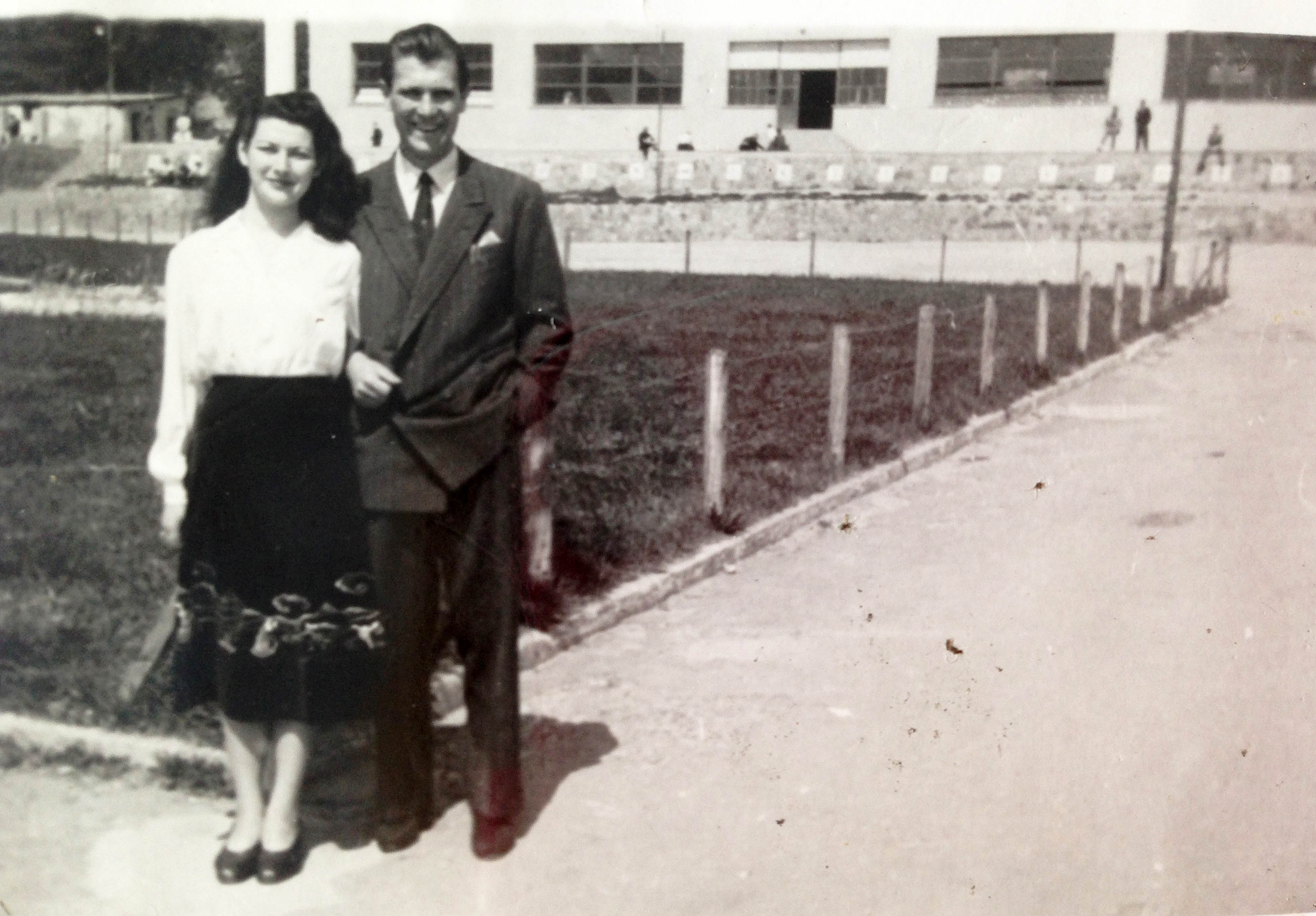 After World War II, my father, his family and many of his friends became war refugees (or displaced persons). The town of his birth, Pola, and the whole region in which it had been the capital, Istria, was no longer part of Italy. It was now Yugoslavia and my father and his family were among many who decided to take what they could carry with them and leave. He met my mother in a town Monfalcone, owning only a couple of sets of clothes, a portrait of himself in military uniform painted by a former girlfriend and a copy of La divina commedia by Dante. They married in 1948 however he wanted more from life than living with his in-laws in a small town and working in the local ship-building yards. His studies in Rome had been interrupted by the war in 1939 and he had dreams of going to America or Australia, both of which were accepting migrants from war torn Europe. 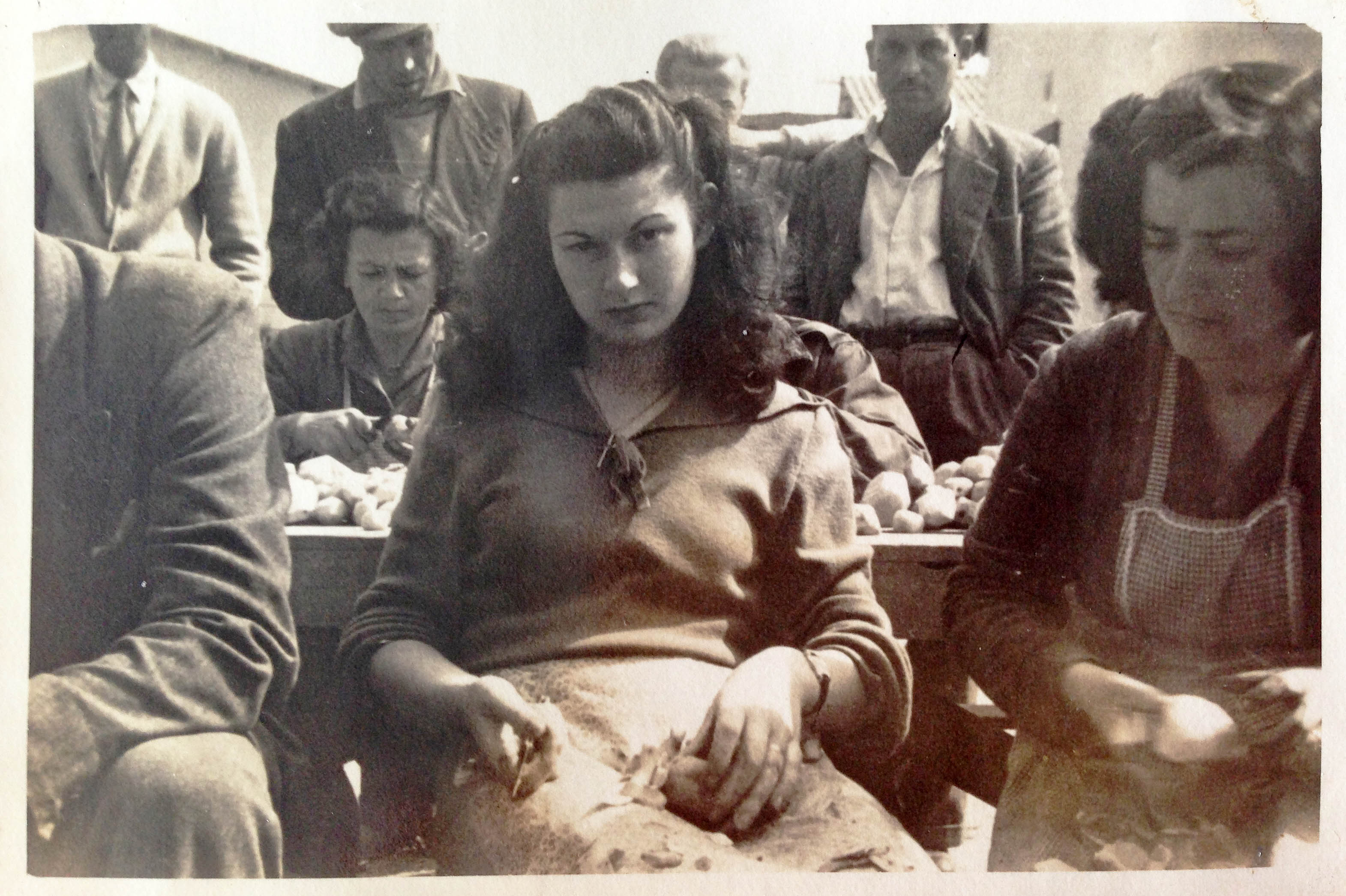 So in late 1949 and part of 1950, they moved through a number of camps in Italy (Cinecitta’, Versa, Barletta and Bagnoli) waiting for a berth on a suitable ship to either the USA or Australia. Life in these camps was hard work. You were expected to contribute to the running of the camp (see the photo of my mother above, looking miserable peeling potatoes). There was a feeling of excitement and anticipation in the camps, which were full of people from countries like Poland, Romania, Russia and Latvia. My mother tells a story of my father disappearing for an hour one day and returning with a 30 piece set of solid silver cutlery. He had bought it from a Polish man (who was selling all his possessions) and paid 30,000 Italian lire for it, which was a large sum of money in those days. Papa’ reasoned that they would now have a beautiful set of cutlery to use in their new country – mamma just despaired – it wasn’t quite what she had in mind to buy with their precious money! He gave me the cutlery as a gift a few years ago – and it is indeed beautiful and even more special to me because of this story. 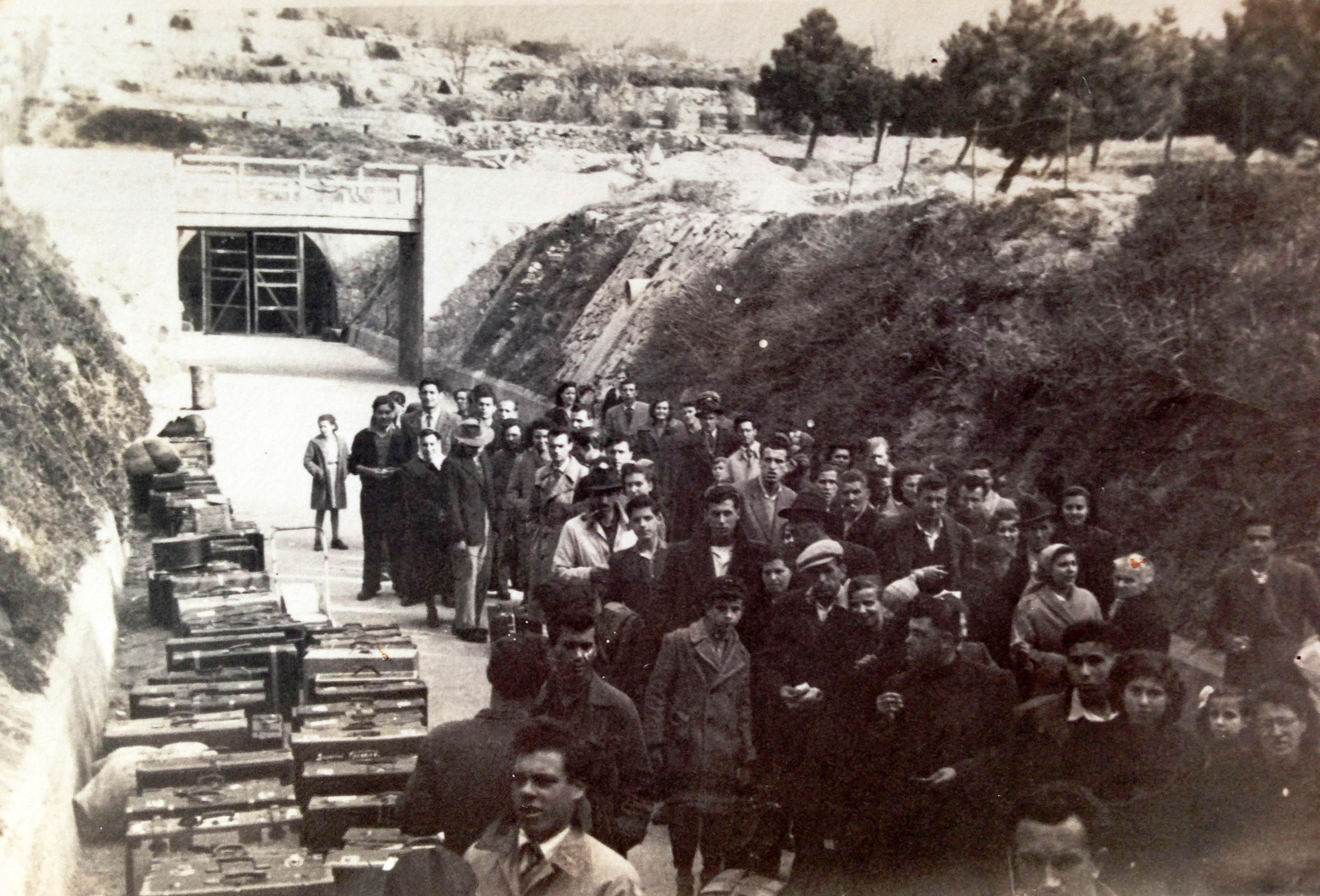 Finally they managed to secure two berths on the General Greely, an American ship departing on 18 April 1950 from Naples, headed for Australia as part of the Displaced Persons Resettlement Scheme. The ship had 1271 displaced persons (DPs) on board. The DPs had free travel to Australia in exchange for two years of work. They were not allowed to return to their country of origin for that period without repaying the government the cost of the journey, effectively acting as (as written on an information board at Bonegilla) an “effective and controllable pool of labour” for the Australian government to help reconstruct the post-war country. My father took the photo above from the camp in Naples and it shows rows of suitcases on the left and crowds of people on the right, waiting to board the ship that would take them to a new life full of hopes and dreams of a better world.

On the ship, men and women were in separate quarters which were like large dormitories. Blankets were hung between beds so that there was some privacy. The toilets had no doors so the ladies would go in pairs so that each would take turns to stand in front of the open cubicle. Meals were usually eaten standing up as there were not enough tables and chairs to accommodate the large number of passengers. 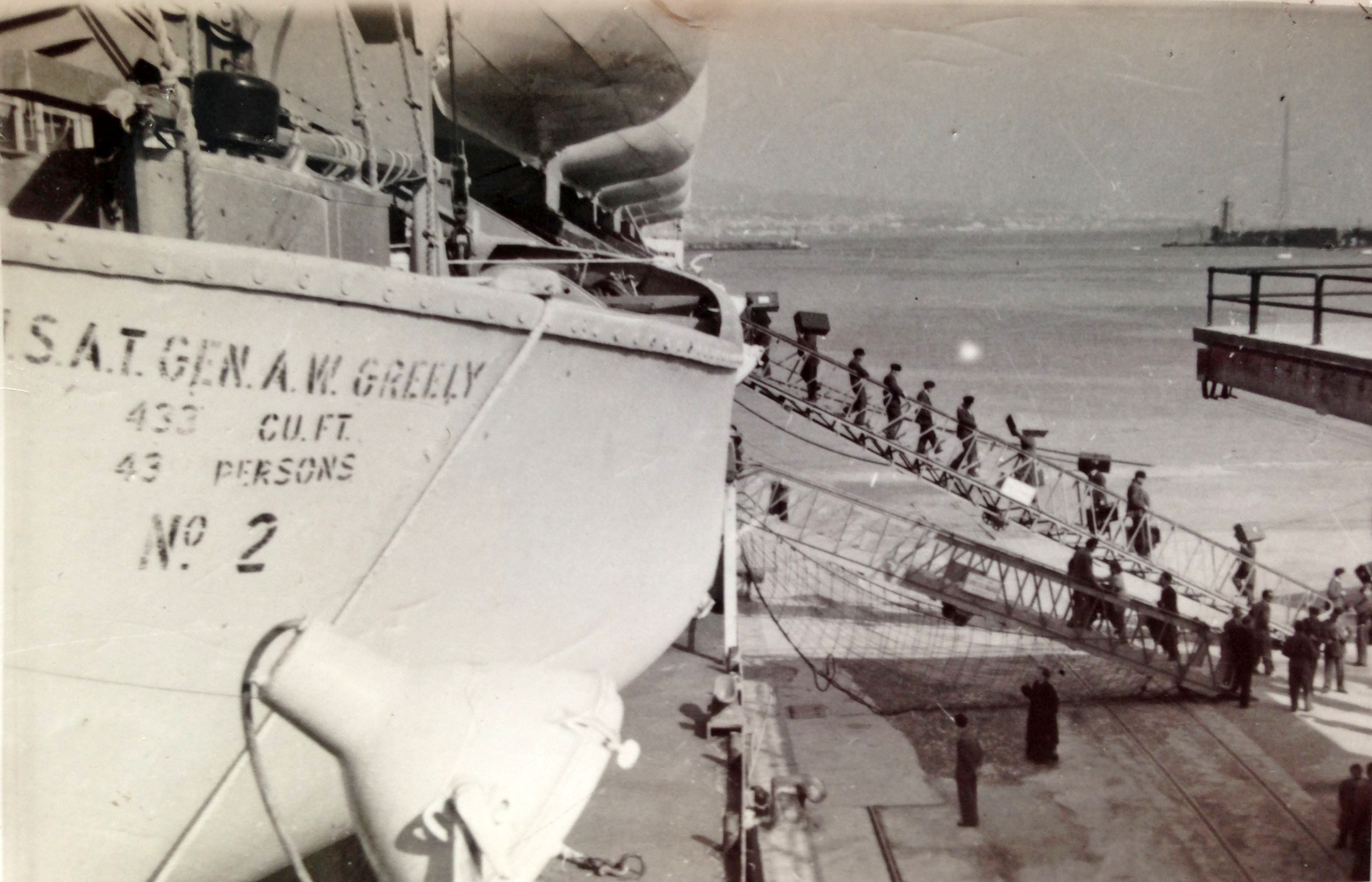 The DPs would have to show their identity papers prior to getting their meal. Several times, my mother’s identity card was whisked away when she presented it to receive a meal and personnel would take her to see one of the ship’s senior officers, who was over 60 years of age. Under the pretence of teaching mamma some English, he would joke around and then try to make a pass at her. She fiercely resisted, quickly excused herself and ran along the corridor and down the stairs to find my father to tell him. And he just laughed at her as he said that nothing had actually happened! Apparently the same officer tried this routine on other girls on the ship. What a rascal!#%!! However my mother, as you can see in the photo below taken on board the ship, was a 22 year old beauty so it comes as no surprise that officers were interested in her. And my father in the photo below cut a dashing figure in his cap on the deck. 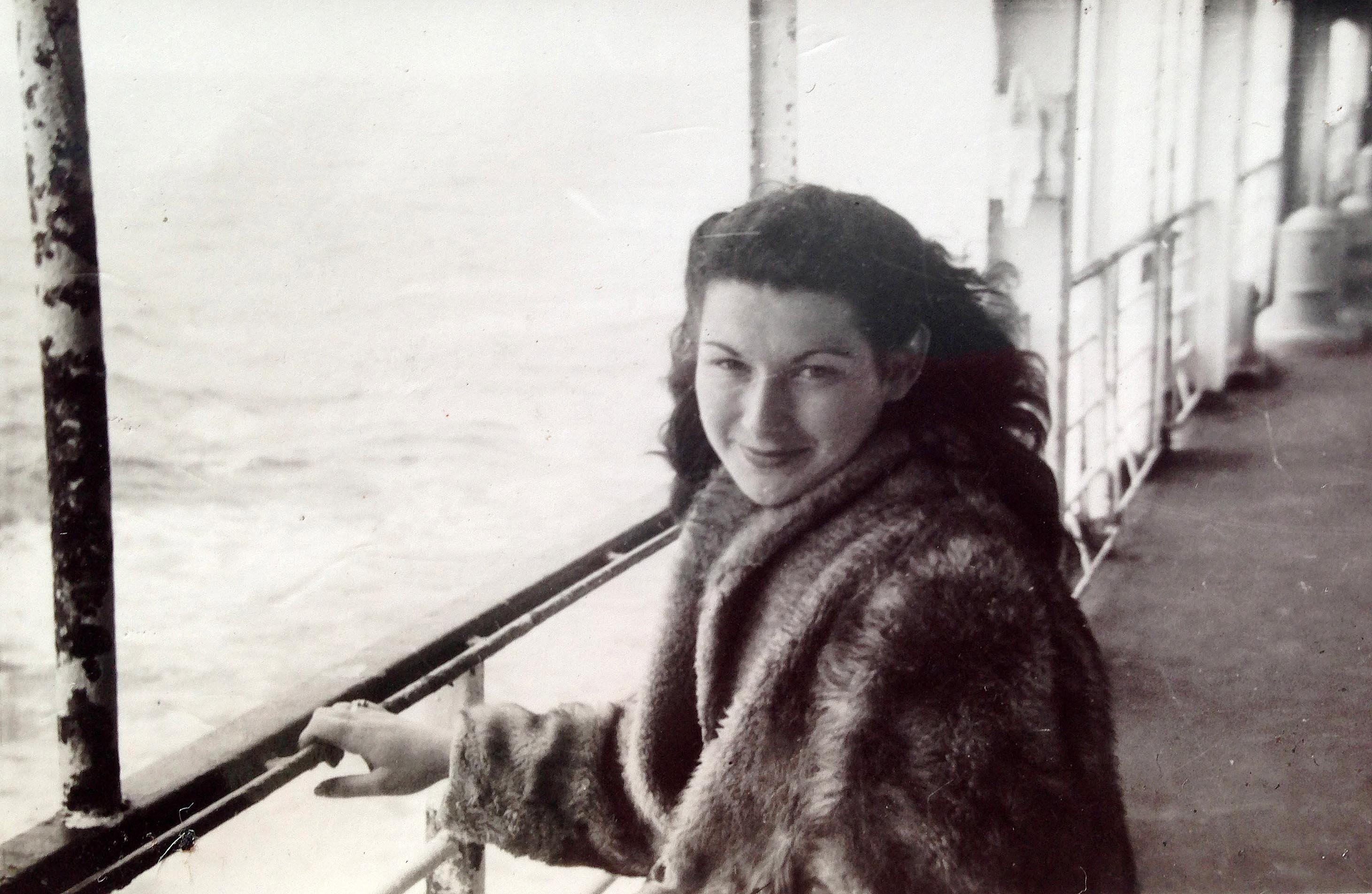 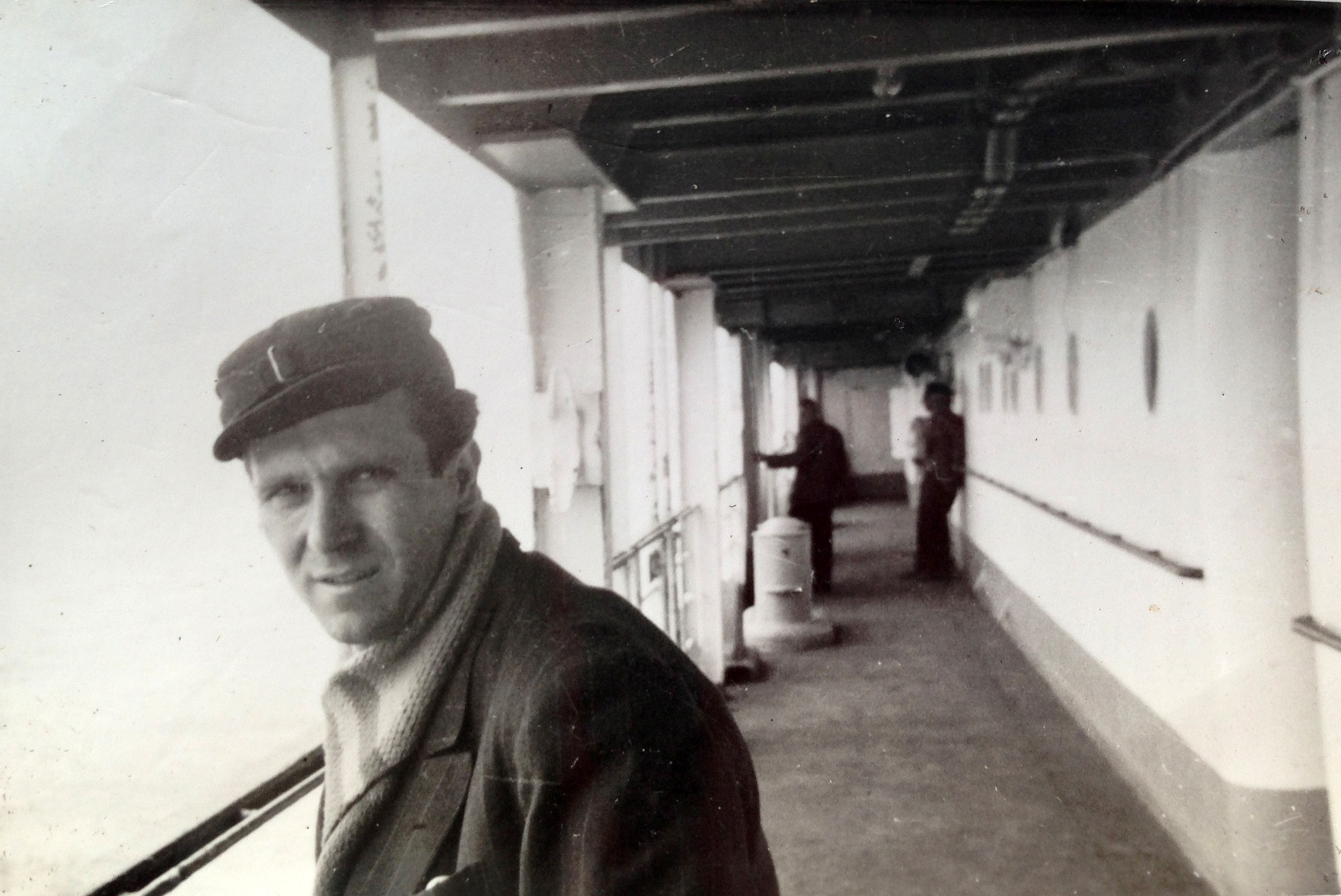 After some 4 weeks on the ship at 4pm on 12 May 1950 they arrived at Station Pier in Melbourne. Mamma says that it had just stopped raining when they sailed into the port and there was a beautiful rainbow. She told my father that she thought they would be happy in Australia as the rainbow was a sign of good luck. Early the next morning at 8.30am and again at 9.30am, trains took off directly from Station Pier taking the 1,271 displaced persons on the long slow trip to a number of migrant camps, including the one at Bonegilla. The photo just below is of the Forum Theatre in Melbourne, taken by my father from the train taking him to Bonegilla. The photo after that is at the Bonegilla Migrant Experience museum. You can see that the train was indeed right next to the ship – no time for sightseeing for these migrant workers! 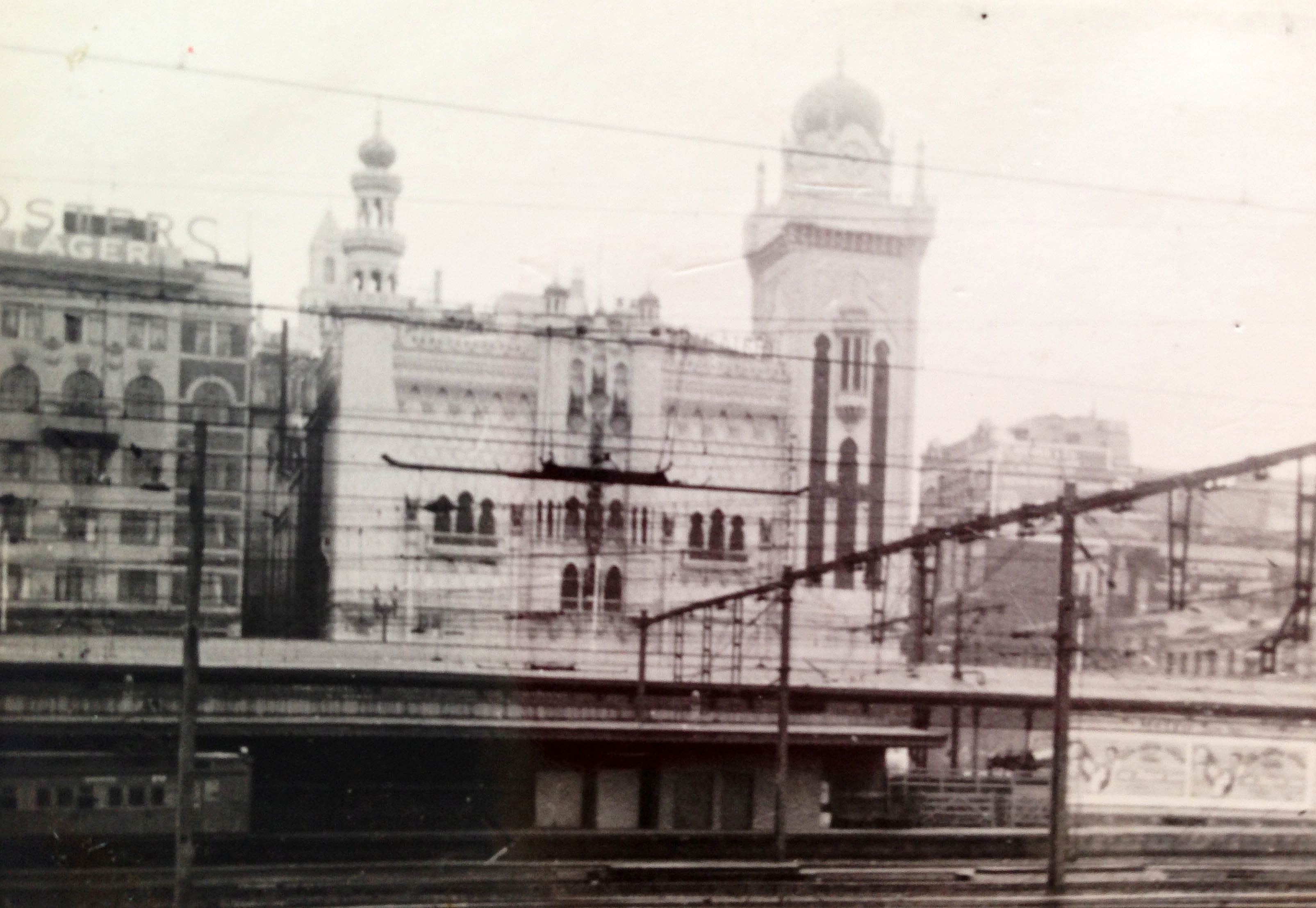 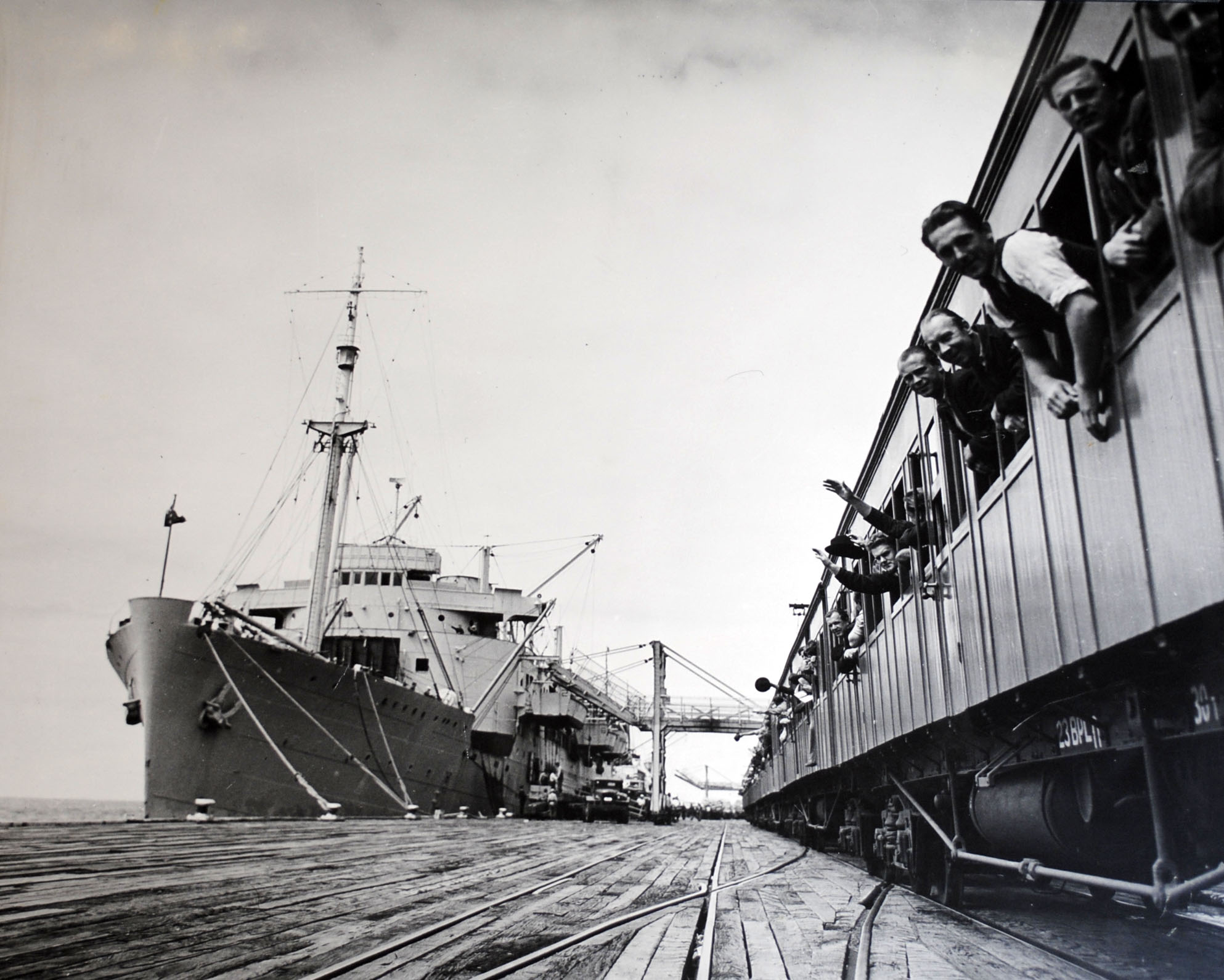 In honour of my mother and the hundreds of potatoes she peeled at camps whilst waiting for a ship to take her from Italy to Australia, I am sharing with you a recipe for an Italian style potato salad. My father loved cold cooked potatoes in salad – though he just wanted potatoes, thinly sliced garlic, olive oil and vinegar in his! I have jazzed it up a bit and it is something my husband and I often have on a Sunday night in the warmer months.

Next blog post: Arriving in Bonegilla (and facing the reality of food and cooking in Australia in 1950). 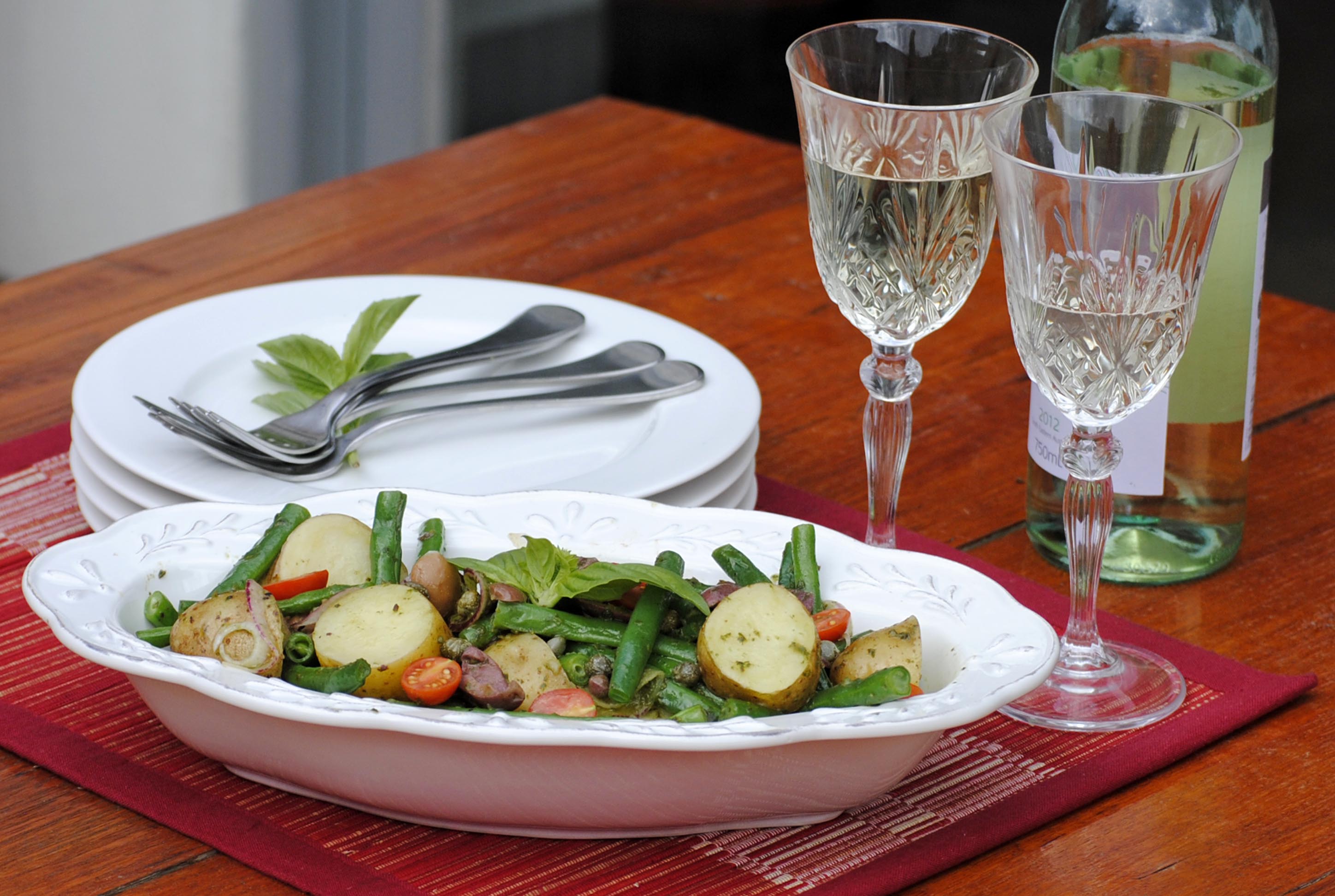 Start by boiling the potatoes (unpeeled) in lightly salted water for 15 to 20 minutes or until fork tender. Let them cool. Steam or microwave beans until just tender. Plunge beans in chilled water when cooked so they stay green. Place cooled beans and potatoes in a salad bowl. Toss in the onions, olives, capers, tomatoes and mix with your hands.

To make the dressing, place the pesto, olive oil and vinegar in a clean jar. Put on the lid and shake until well incorporated. Add the dressing to the salad and toss gently. Add salt and pepper to taste. Grate on some lemon zest. Serve with a glass of pinot grigio as an entree or as a side dish for a main.

You could also add a tin of good quality tuna chunks in olive oil (like Calippo or Sirena), using that oil in the dressing instead of other oil. This will make the dish your entire meal!