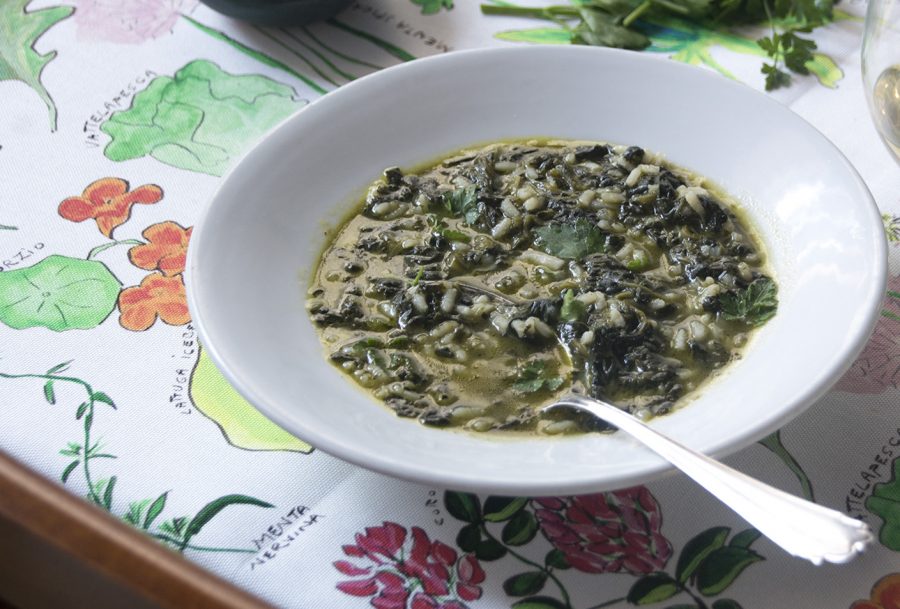 I have been writing the year 2017 in place of 2016 for a few months now. Maybe it is because I have been looking forward to it so much. 2016 had its amazing highs including writing and publishing Italian Street Food, running a workshop in Sicily and spending almost two weeks on Capri taking photos for a book by Holly and Gianluca Esposito from Ristorante Michel’Angelo, as well as running an ever greater number of cooking classes in my home in Melbourne and leaving my job just over a week ago. Phew. On a sadder note, I lost two elderly aunts and an uncle this year. They live on in my memories and photos of them, however visits back to Italy will be emptier without them. There is A LOT to look forward to in 2017 and I am so excited that it is here. I have just started reading and planning the year ahead, including researching cookbook number two and getting organised for my 3-month trip to Italy (which is under 10 weeks away). Mark and I will be spending an extended period in Trieste to see my family to start with and the rest of the trip will be guided by where the research of the next few weeks leads me. 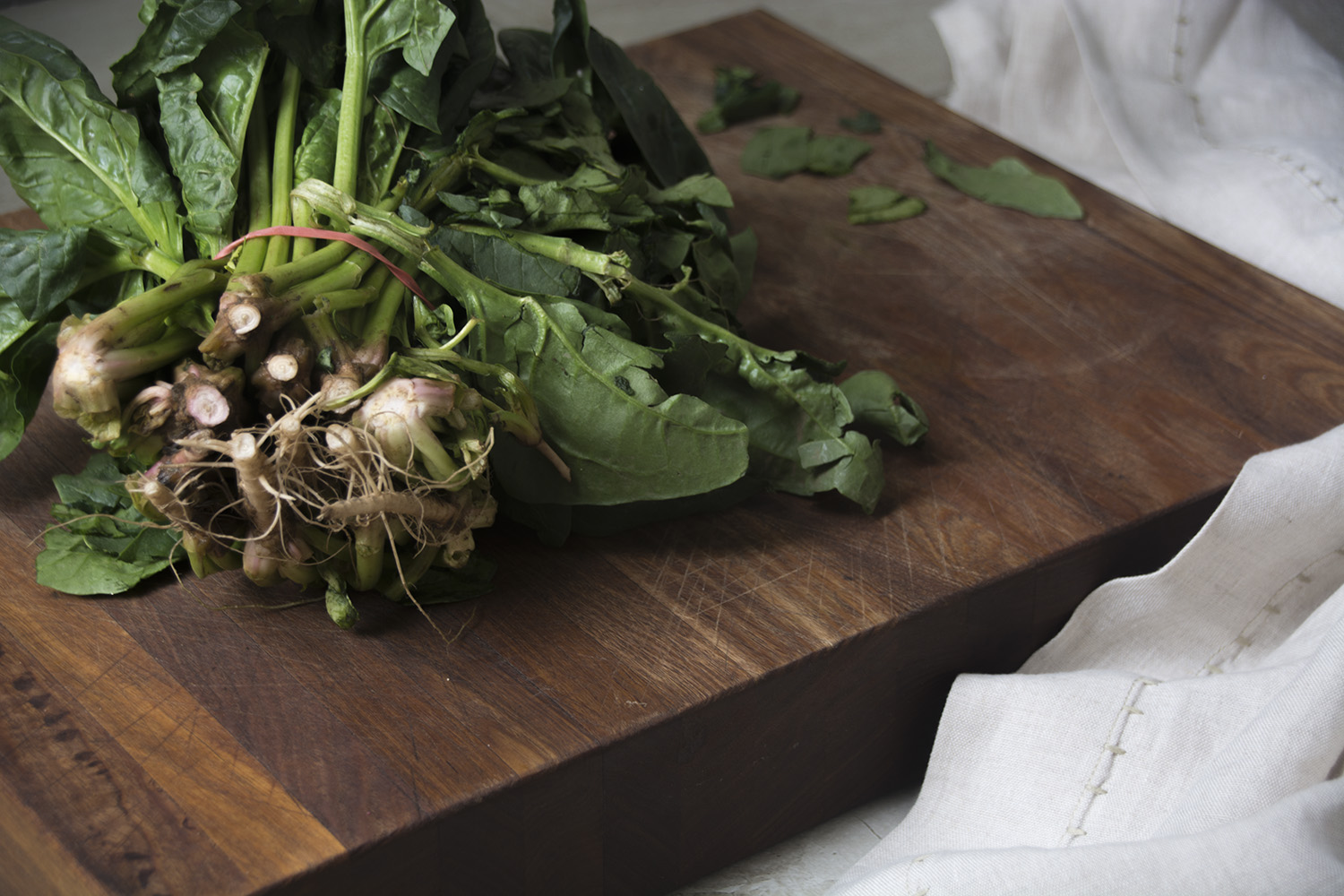 I have used the break to start reading the backlog of books I received in 2016 that I have not had time to look at yet. In May last year, my zia Dina gave me her 1974 edition copy of Maria Stelvio’s Cucina Triestina written in 1927 and considered to be a classic compendium of local recipes, with influences from Slovenia and Austria.  I was particularly drawn to the chapter on summer soups (ministre estive) as apart from a salad, there is nothing quite as lovely as a fresh vegetarian soup on warmer days. Stelvio gives a list of rules at the start of the chapter on summer soup preparation including: if using garlic, the cloves should peeled and whole; onions should be scraped with a knife (raschiate col coltello) or grated; when rice or small pasta (pastina) is used in soups, it should be added when the liquid is boiling and cooked uncovered; and to not use the water that you cook your spinach in e’ un vero delitto (is a crime). 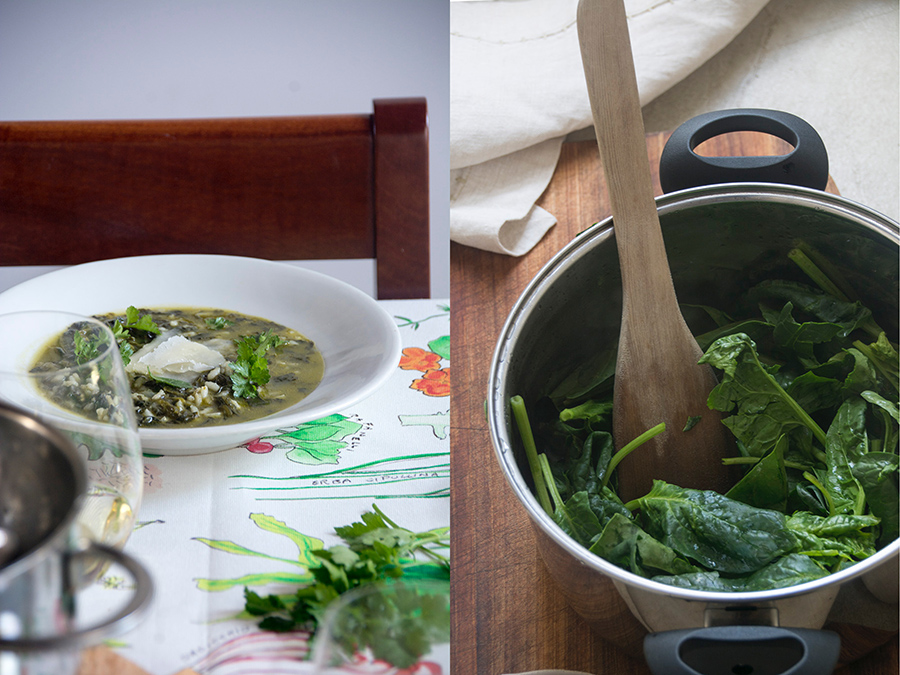 I buy a bunch of leafy greens most weeks, and either keep them fresh in the fridge or blanch them and store them cooked to toss into omelettes or on pasta. I generally throw out the water they are cooked in, but will keep it in the future (lest I be accused of committing a crime!). The rich green liquid formed is used not only in this recipe, but for risotto and in general as a vegetable stock – you could freeze it too. I wouldn’t recommend using frozen spinach for this recipe, but you could try substituting another leafy green such as kale, silver beet or nettles.

I loved the sound of rice in a soup – it reminds me of meals when I was a child where there was always a pot of chicken broth if not on the stove, then in the fridge. Mamma would add pastina, or “pasta butada” (egg and parmesan mixed and then tossed into the broth, forming salty delicious eggy clumps as it cooked) or cooked rice. Rather than adding pre-cooked rice to the soup, Stelvio cooks the rice in the spinach-y liquid, much like you would for a risotto, making it rather like a loose soupy risotto. I used Arborio rice the first time I made it, though this added to the cooking time, it meant that the rice had a lovely bite to it. You could substitute this with another short grain rice, making sure you taste regularly during cooking so that it does not become too soft. I like tossing fresh leaves on the top of the soup just before eating, and serving the slightly cooled soup with a salty aged cheese (like Grana or Parmigiano) and a good drizzle of extra virgin olive oil. And in case you are interested, the gorgeous tablecloth in the photos is designed by my friend Fabrizia Lanza. I especially love the hand-written names of the vegetables and herbs on the cloth including one named “I don’t know” (non lo so)!  Fabrizia has several other designs (I was very tempted to get the one with the zucchini flowers on it) and you can have a look at the range here.

Happy 2017 – may the year bring you happiness, health and good Italian food. 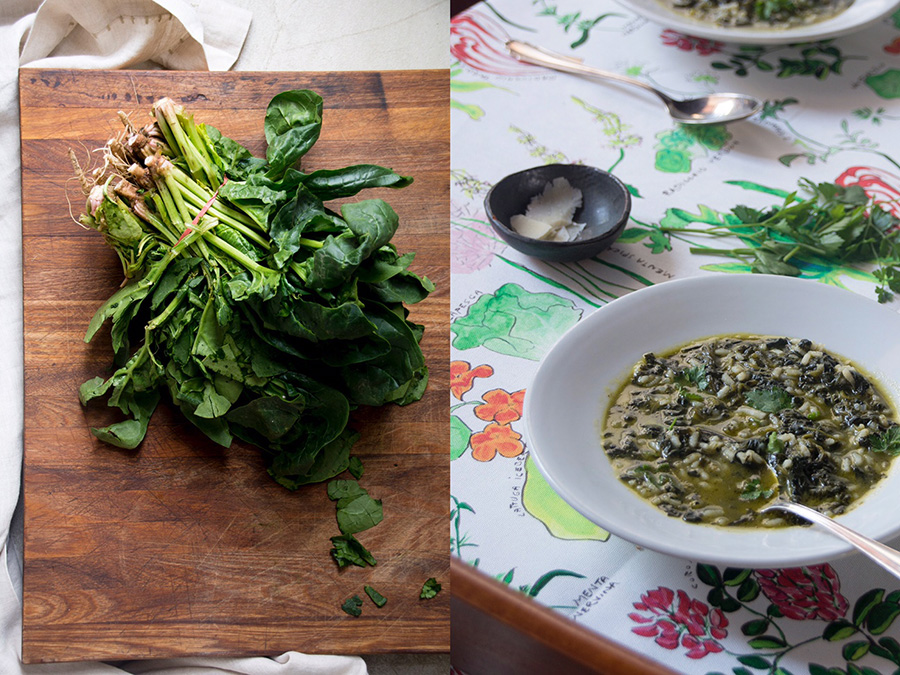 Serves 4 as a lunch

Wash and clean the spinach well and toss it without draining it into a large pot on the stove at medium heat. Allow the spinach to wilt for a few minutes, carefully remove and place in a colander over a bowl. Collect the liquid that is left in the pot and catch any draining liquid from the colander as this will be used as the liquid base of your soup. Strain the spinach in a clean tea towel to remove excess liquid and reserve this liquid as well.

Peel the onion and place in a small food processor and whizz until it is very finely chopped. Place a heavy-based pot on medium heat and add the onion, butter and EVOO. Cook, stirring occasionally until the onion softens and becomes translucent, then add the peeled and bruised whole clove of garlic and cook for a few more minutes. Next add the spinach and cook, stirring for at least 5 minutes, then add the rice and cook stirring regularly for another 5 minutes, until the rice grains are nicely warmed and coated. Add the wine and increase the heat for a few minutes, until that evaporates, then reduce the heat to medium again, adding the spinach stock a ladleful at a time (like you would for risotto), stirring occasionally then adding more hot liquid (stock or water) until it is a soupy consistency and the rice is almost cooked through (taste as you go).

Adjust for salt and pepper then remove from the heat and keep covered until ready to serve. The rice will continue to cook as is cools so make sure it still has a bit of bite when you take it off the heat. I like stirring in a good handful of cheese at this point, then letting the soup cool a bit before serving. Scatter on extra cheese, parsley leaves and drizzle the soup in individual bowls with some EVOO.

Serve with cheese and bread or an egg salad for a more substantial meal, and a glass of Istrian Malvasia wouldn’t astray either. 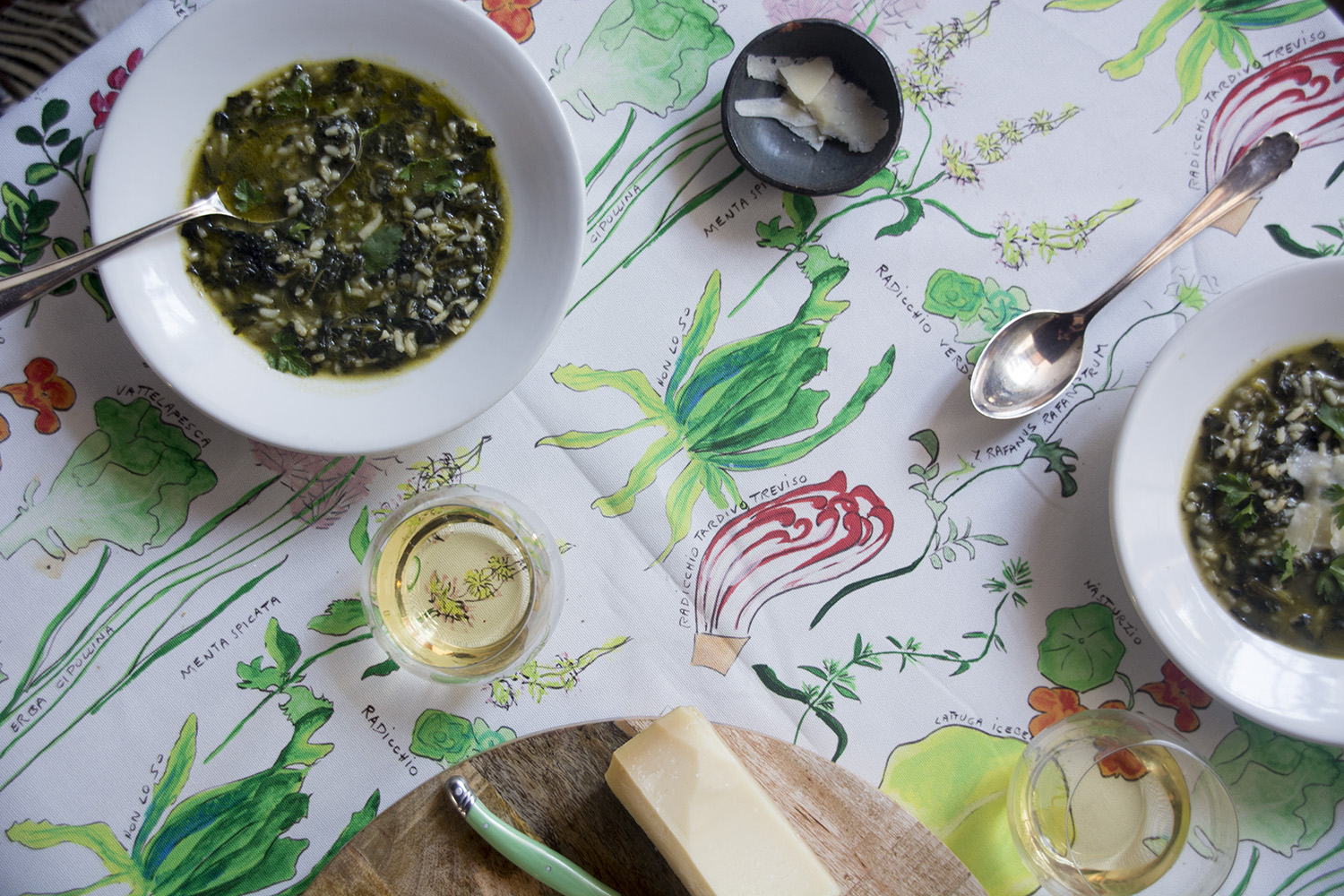