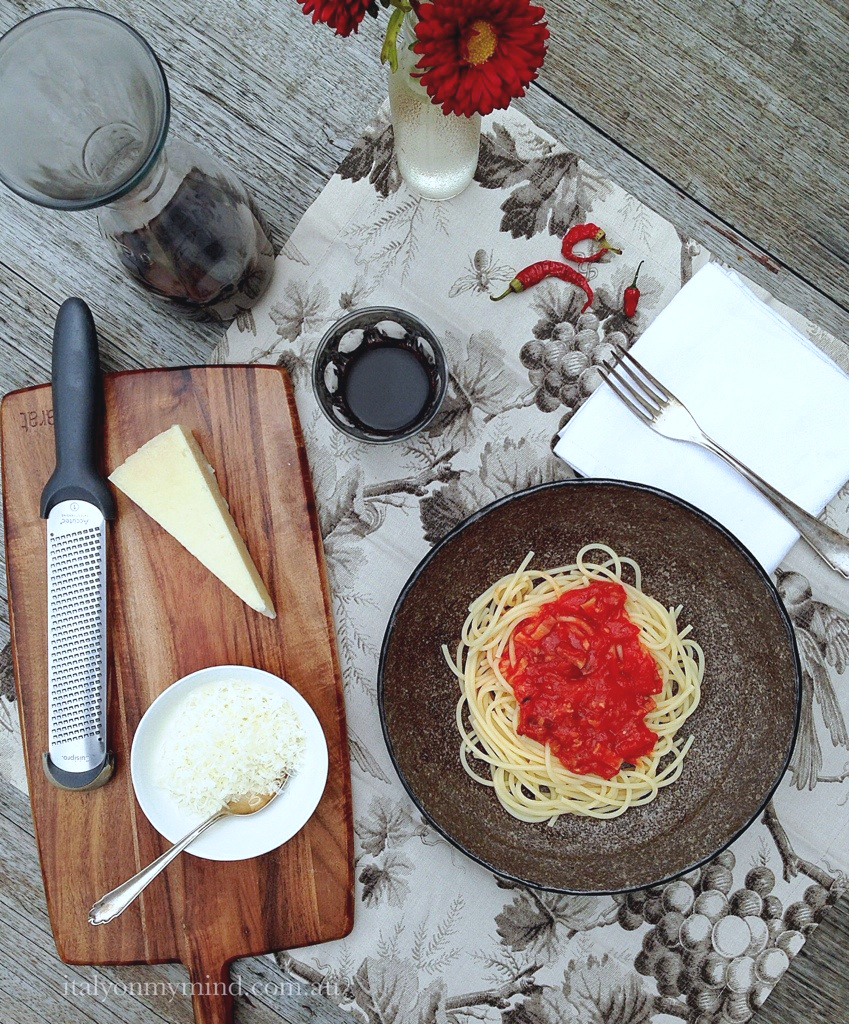 Spaghetti is the ultimate fast food. I don’t know how Heinz ever thought they could get away with putting it in a tin, mushy like baby food with a sickly sweet red sauce – it is so easy to make, why did they bother? Back in 1950 when my parents first arrived in Australia, it was hard to find dried spaghetti (I imagine the tinned variety was more common). Amazingly they managed to find some packets of spaghetti a few weeks after arriving when they were staying at the migrant camp in Bonegilla. My mother tells me that they went on a day trip to a nearby town, Albury and found some spaghetti (the dried variety) in a shop. The food in Bonegilla was notoriously bad so they bought the spaghetti and took it back to the camp. Mamma tells me she cooked it on a camping stove and meat sugo to go with it. As you can see from the photo below, they ate it seated on a picnic rug in a field. This was probably their first meal of spaghetti in their new homeland. Fast food in the Australian countryside in 1950 – italian style.

My mamma is on the right of the photo with the long dark hair, she was only 22 at the time. The man in the centre of the photo is Stanco Sussich, who with his wife Emma (second from the left), travelled with my parents on the ship General Greeley from Naples in Italy to Australia. Stanco recently passed away – he was almost 102 – a long and amazing life spent so far from his home land in Istria. Spaghetti no doubt sustained many of the italian migrants in their first years away from their home land. It is a simple dish but there are a couple of basic rules to make perfect spaghetti every time: 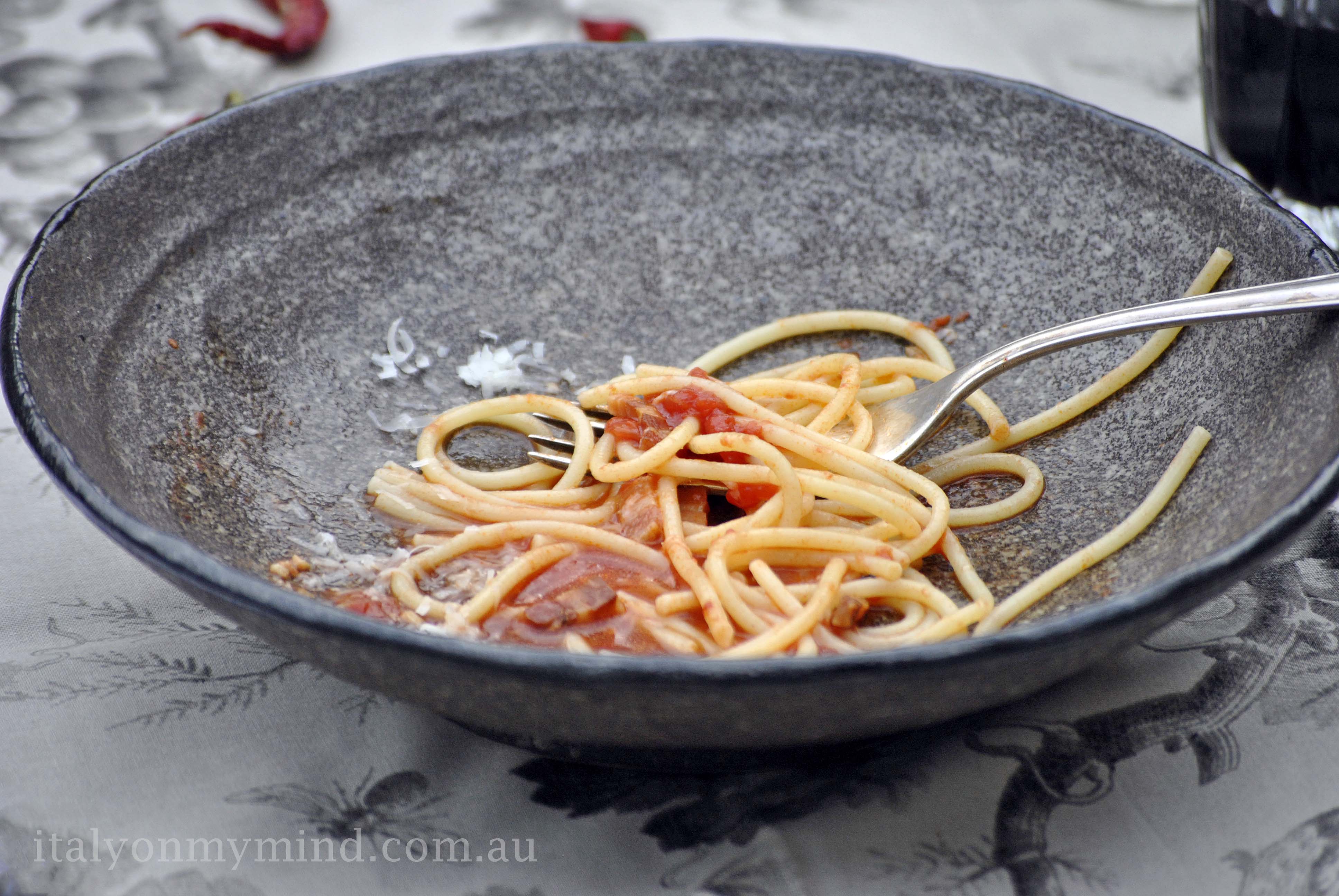 1. Buy good quality spaghetti
The brand I choose depends on the shape of the pasta. As far as spaghetti goes, you can’t beat Barilla. If I can’t find Barilla, I buy De Cecco. And it’s not just spaghetti – there are linguine (flat spaghetti), bucatini (spaghetti with a little hole in the middle), vermicelli (thinner spaghetti, it literally means little worms) plus different sizes of spaghetti. I generally buy De Cecco spaghetti no.12 or Barilla no.5.

2. The amount of water in the pot
Cook pasta in plenty of water. The general rule is about 5 litres (or quarts) of water in a large pot for 500g (half a pound) of pasta. It does not have to be precise but less water means that the starches in the pasta that are released don’t distribute as evenly so can make the surface of the pasta too gluey.

3. The amount of salt in the pot
Don’t be stingy with the amount of salt you use – use 2 tablespoons of coarse salt (for 5 litres of water and 500g of pasta). As I am usually cooking for two people, I add about a tablespoon. If you add it before the water boils, it will boil more quickly. Salting the water means that the pasta absorbs some of the salt; it doesn’t work the same way if you salt it later

4. When do you add the spaghetti?
Add it when the water is a rolling boil. Drop in the spaghetti, wait until it starts folding, give it a stir and then put the lid back on and allow it to come to the boil again. Then take the lid off, give it a bit more of a stir and then cook it until it is “al dente“. And do NOT put oil in the water (which some people do to prevent it from sticking together) because the oil will prevent your sauce will also not stick to the cooked pasta. Pasta will not stick together if you have followed points 1,2 and 4.

6. Al dente or not?
Al dente describes the texture of the pasta and means “a bit of bite” (or hardness) in the centre of the pasta. It really is up to you how much al dente you like pasta. I remember my father liked pasta less “al dente” than my mother, which means that someone is always not quite happy with its texture! Barilla, for example, gives two cooking times on its packet of spaghetti no.5 – ten minutes for “al dente“, otherwise 12 minutes. I suggest tasting it to see what you prefer at the ten minute mark.

7. What to do when the pasta is cooked to your liking
Drain the pasta in a colander but NEVER rinse it with cold water as it removes the starch and your sauce will not stick to your pasta. In some dishes, like pasta with pesto, some of the salty cooking water is reserved and tossed in with the pasta. It helps bind the dish together as well as giving it a bit more liquid, which is needed when you have a drier sauce. 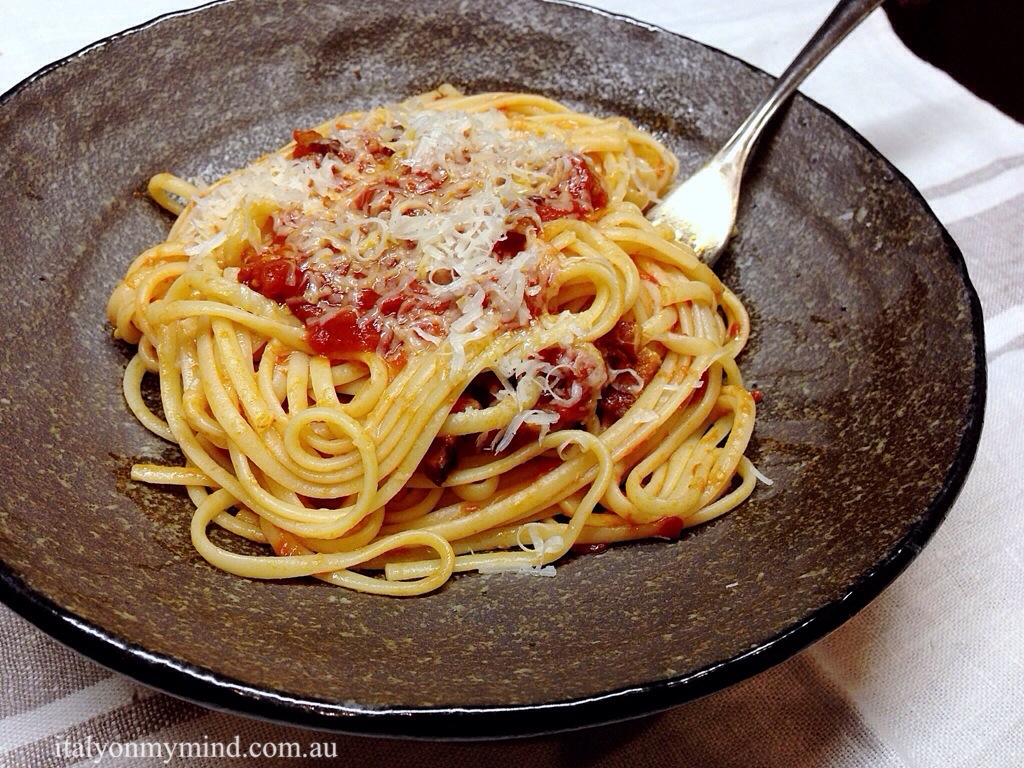 The recipe below is an old favourite because it is quick (under 30 minutes and it is on the table) and it is made from ingredients that I always have in the fridge or the pantry. Fast food Italian style. Buon appetito!

Cook the guanciale on medium to low heat in a small non-stick frypan. In the meantime, prepare the other ingredients. Put your pot of water on the stove and bring it to the boil. After 5 -7 minutes when the cured meat is starting to brown, remove it with a slotted spoon and set aside. In the same pan, add a splash of olive oil with the garlic and chilli. Cook for a few minutes until fragrant then add the tomato and the pinch of sugar if using and simmer on medium heat. By now the water for the pasta should have boiled so add the pasta and cook (using tips above) until cooked to your liking. Just before the pasta is cooked, add the browned guanciale to the tomato and stir through. Taste and add salt if needed. Drain the pasta and place on warmed serving plates. Spoon on the sauce and added grated pecorino or parmesan cheese to taste.

Linked posts:
Orechiette with cime di rapa
Chestnut pasta with mushrooms
How to make the perfect pasta puttanesca
Linguine with zucchini, lemon and mint
Cavatelli with pork sausage and peas