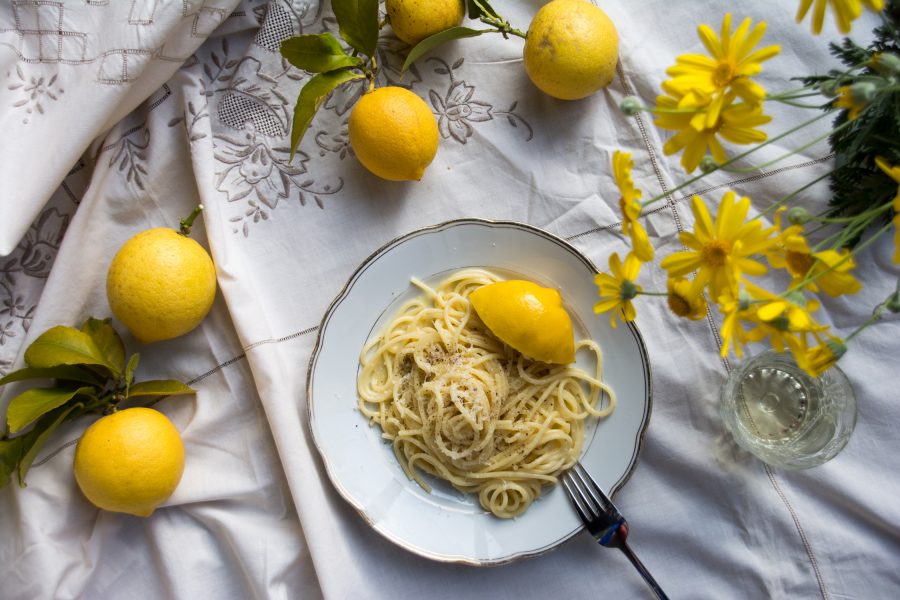 We landed back in Australia a week ago today, after three glorious months in Italy and an epic road trip along the Adriatic coast. As the trip was essentially a research trip for my next book Adriatico, days were spent talking to the locals, shopping in markets, taking photos of locations, and lots of eating and tasting the traditional local foods. My original plan had included cooking along the way, so I could start testing recipes as we travelled. I had rented predominantly Air BnB apartments with kitchens, though their definition of a kitchen differs somewhat from mine, as some had little more than a place to heat up food in pans that were slightly suspect and blunt knives. Other kitchens, such as in the apartments I stayed in Otranto (Puglia), Trieste and Ravenna were very good, so I managed to do more cooking. And it wasn’t just cooking for the book; it was also cooking just to eat – regular food when we were tired of restaurants or when we had spent more than the budget I had put away for the trip on that day. There was one recipe I returned to again and again during our travels – spaghetti al limone (spaghetti with lemon). And before you start thinking “oh, lemons and cream” – there is no cream in this, and it is simple enough to make in the most ill-equipped kitchen with a bare minimum of ingredients. 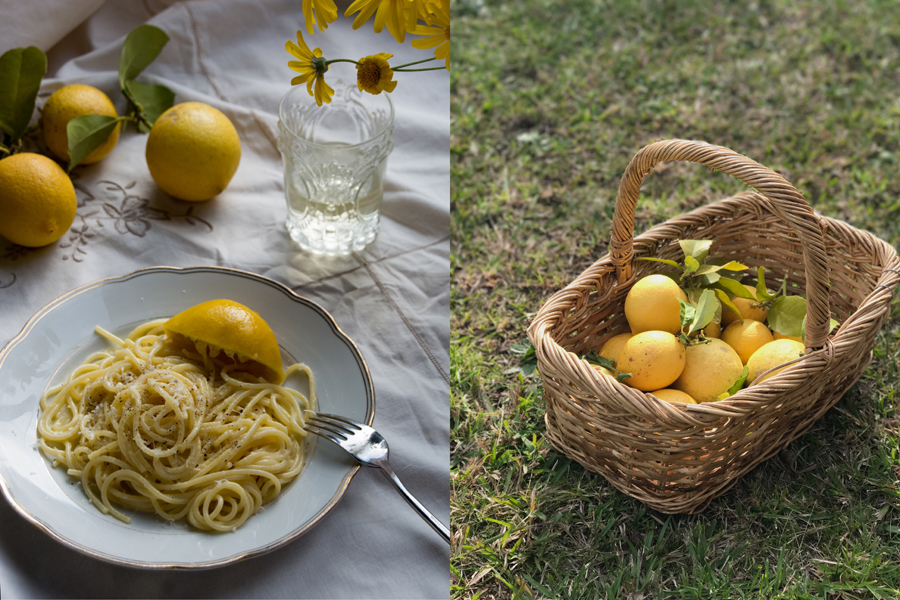 I have my Instagram friend Frank Prisinzano to thank for this one. He talks through recipes on Snapchat and Instastories and I was in Trieste in March when he posted about this dish. He is passionate about Italian food and cooking, with a focus on understanding the ingredients, thinking about what you are doing and why you are doing it. For Frank’s version (and my adopted version) of spaghetti al limone for two people, all you need is spaghetti, one lemon (preferably unsprayed), butter and finely grated parmesan cheese, and to follow a couple of rules:
– make sure the pasta cooking water is well salted – taste it to check – rather than adding salt later
– have all your ingredients ready before you start cooking the spaghetti; timing is key and the sauce needs to be made as soon as the spaghetti is on the harder side of “al dente”
– have a second pot on the stove warmed up for stirring the lemon and butter and the cooked pasta. If you stir it in a cold bowl/pot, the pasta will stop cooking immediately, the butter will not melt and the dish will not be as creamy
– make sure the parmesan cheese (Grana or Parmigiano Reggiano) is finely grated so that it melts completely and adds to the creaminess of the dish 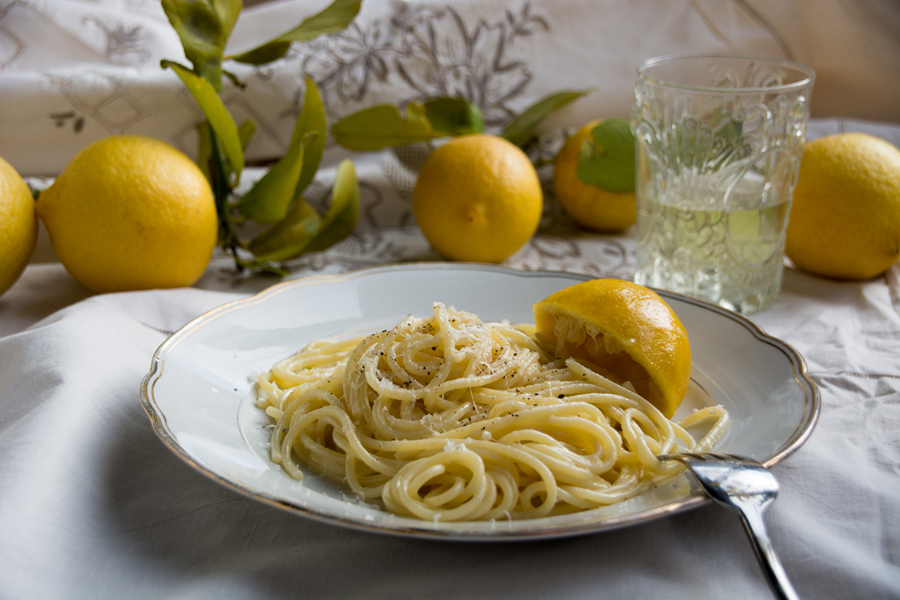 One of the good things about being back in Australia is being able to spend time with my 89-year old mother Livia. She was so excited about having me back again after such a break; she was especially keen to show me the two lemon trees in the garden, which are bursting with fruit. Yesterday I went to visit her, it was a glorious sunny Sunday and after lunch, she urged me to go outside and pick as many lemons as I could carry. Her next door neighbour had dropped by the day before to ask to have some lemons, to which my mother replied that she could have a couple, but not too many as her daughter wanted them (which was very sweet of her though I doubt I will use the hundred or so lemons that are on the trees!). Today when I was picking them, they were so fragrant and lemony; and there was a big bush of flowers just next to the trees, which I couldn’t resist picking as they were the same lemony yellow. I love keeping a few leaves attached to lemons when I clip them from the trees  and you will notice from the photos, they are not perfect in shape; they are not fertilised and rely entirely on rainwater. In fact they would probably be rejected by the bigger supermarkets as being imperfect. In short, they are absolutely ideal for spaghetti al limone. 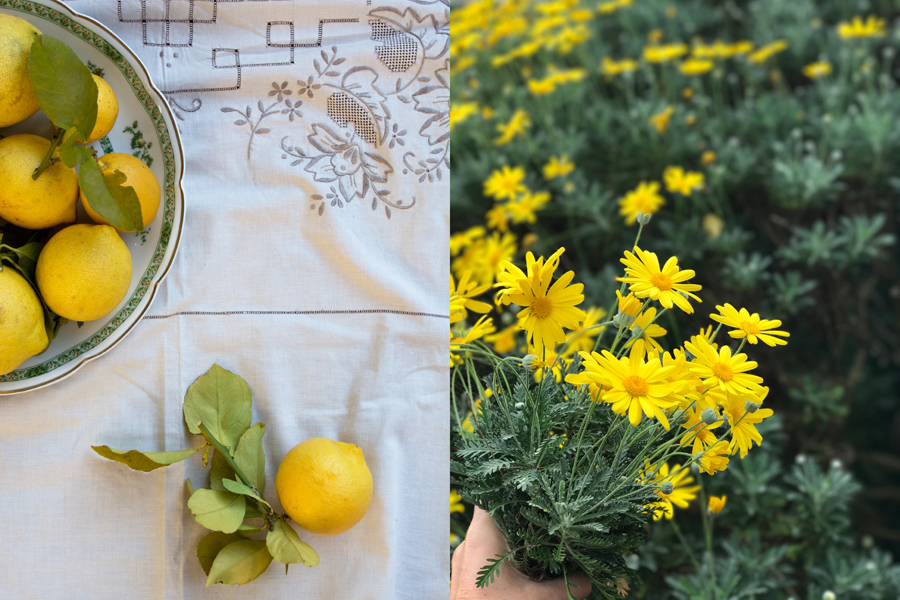 So here is the recipe that got me through cooking in apartments with little equipment and even fewer ingredients sometimes in remote places all through Italy.

Bring a large salted pot of water to the boil. While it is boiling prepare your other ingredients; squeeze the lemons and keep the lemon halves to one side; finely grate the cheese and set aside; chop the butter.

When the water is boiling, drop in the spaghetti, pushing it down using tongs when it starts to soften to make sure it is immersed in the water and cooks evenly. Give it a cook stir when it is all immersed to ensure it does not stick together. Taste the cooking water to make sure it is salty enough. Place your serving plates in a low oven to keep them warm. Have a second pot ready and warm on the stove to make the sauce, turning off the heat just before you add the cooked spaghetti.

Taste the spaghetti to check that is is cooked just slightly short of the point at which is it cooked to your liking. Lift up the pasta using tongs into the second warmed pot. It is ok if some of the cooking water drops in. Now add the chopped butter and lemon juice and stir using a wooden spoon until it becomes creamy, adding more cooking water if needed. Drop in the reserved lemon halves as well. It may take a minute of stirring until it is really creamy. Then stir in the grated cheese until it melts and pile onto warmed serving plates. Scatter on some freshly cracked pepper, drizzle a bit of extra virgin olive oil (optional) and add a bit more cheese if you like (this is my preference, I like to see the cheese on top). Garnish with a lemon half and serve immediately.