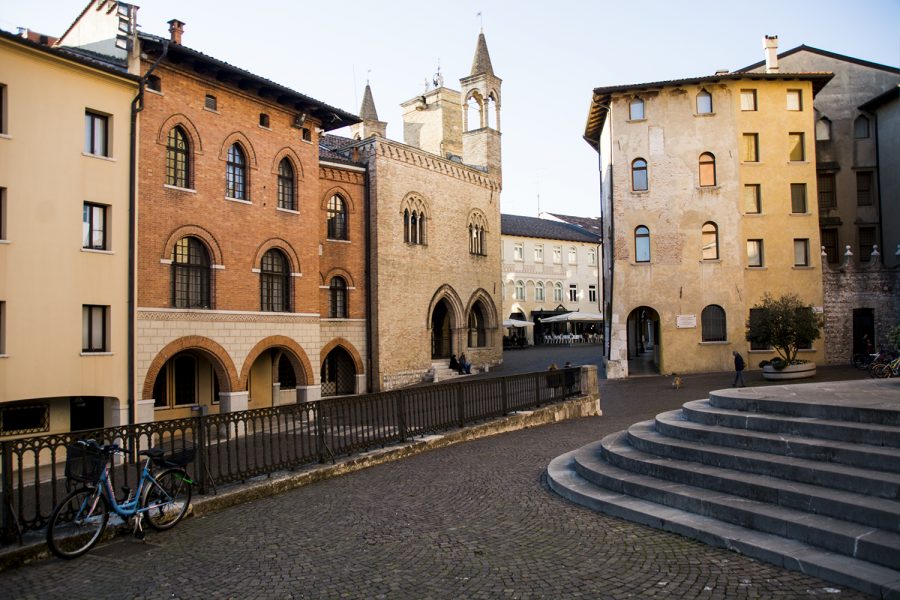 I landed in Venice on Friday night at about 10pm, via a six hour stop in Heathrow. Luckily I had a twenty pound note from my last visit to the UK last year so I was able to fill a good hour of my brief time on British soil with a visit to Carluccio’s Deli and Dining in Terminal 5. I filled up on a large salad (the “Abruzzese”) and a shot of much needed caffeine with a very good caffe’ macchiato, and spent the next few hours browsing the internet as the wifi was excellent quality. The 6.45pm flight to Venice was fully booked and it looked like most passengers seated at the gate had trolley suitcases; so flight attendants went from passenger to passenger trying to convince them to check-in their cases as they would not all fit in the cabin and boarding would be delayed. “But I packed everything into my small case so I could take it onboard, I don’t want to” was repeated over and over to the luckless attendants, who none-the-less managed to talk a handful of passengers into handing over six trolley cases. Now we could board our flight and after a good 15 minutes of queuing on the tarmac, we took off into the night sky bound for “the continent”. The captain announced that the skies were particularly clear that night and as I unexpectedly had a window seat (I invariably book an aisle seat) I was able to enjoy the rows of lights dotting the land below as we flew over France, the Alps, the Italian lakes and finally the Venetian Lagoon. 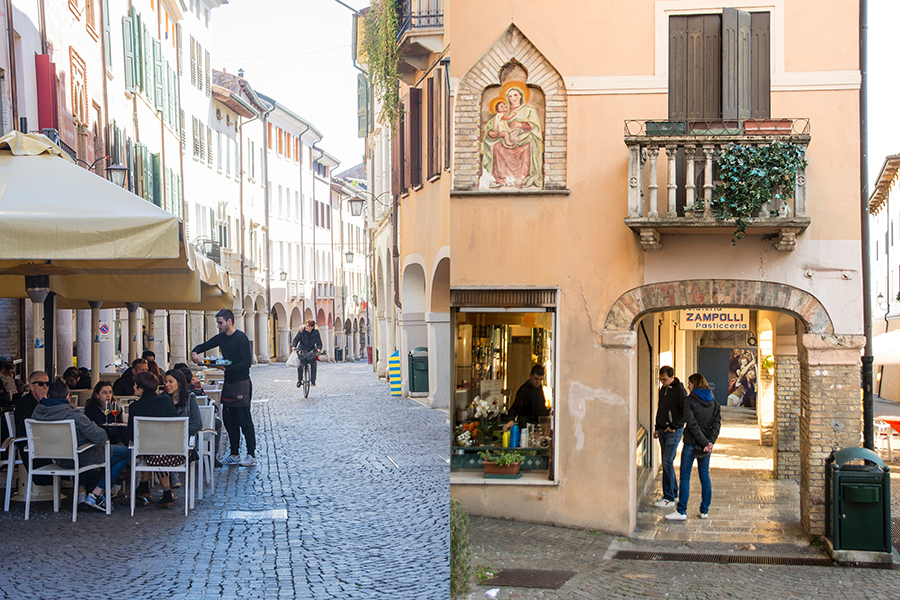 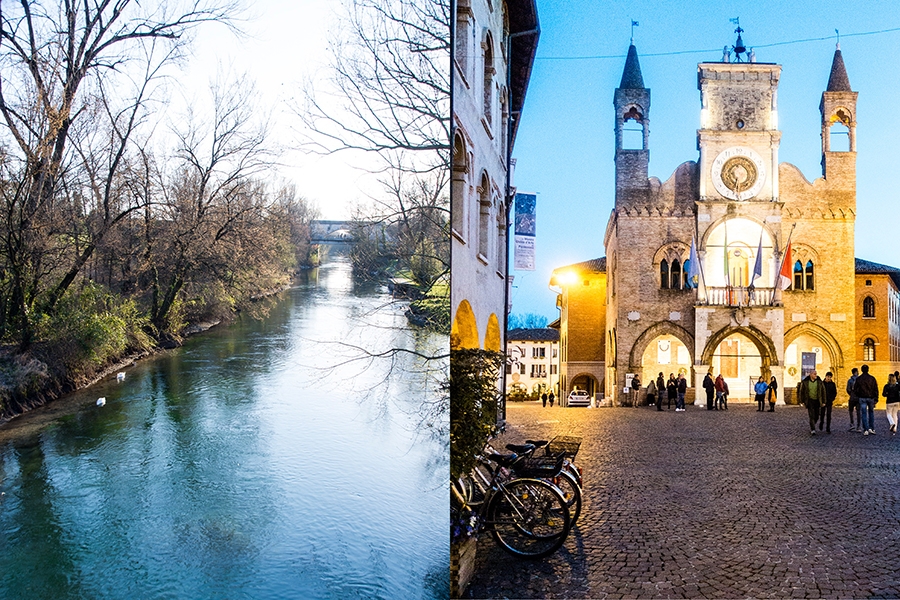 I had booked a room at a local hotel, right near Marco Polo airport; it was one that I had stayed in before, and though a bit tattered around the edges, it has marvellously firm beds (which is my first priority when booking, with a reliable wifi service coming in at number two). The next morning it dawned on me that I was actually in Italy and though I could easily have stayed in bed for few more hours to rest my jet-lagged body, I wanted the adventure to start. After cake for breakfast (it is Italy after all, fruit and yoghurt could wait a few more days), I packed my bags and boarded a bus to Pordenone. One thing that Italians are very good at is setting up systems that allow you to buy train or bus tickets online, have the ticket sent on your smartphone as a PDF – which gets scanned when you board – and being able to pay with a Paypal account. So this is exactly what I did before I left the hotel – bravi gli italiani! Pordenone is one of the four capoluoghi di provincia (larger towns) in Friuli Venezia-Giulia (FVG), and the only one I had yet to visit. I called up zia Dina and told her I was going to Pordenone for a few days and she asked me why I was going there; I told her that I had never been (to me that is a good enough reason) and she laughed aloud saying that she has never been there either (and she had lived down the road in Monfalcone in FVG for about 60 years). 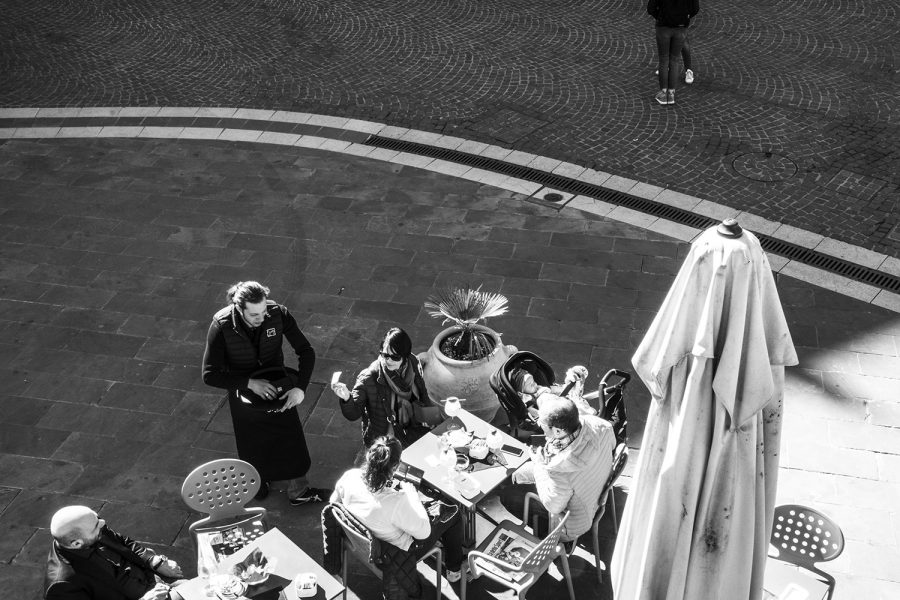 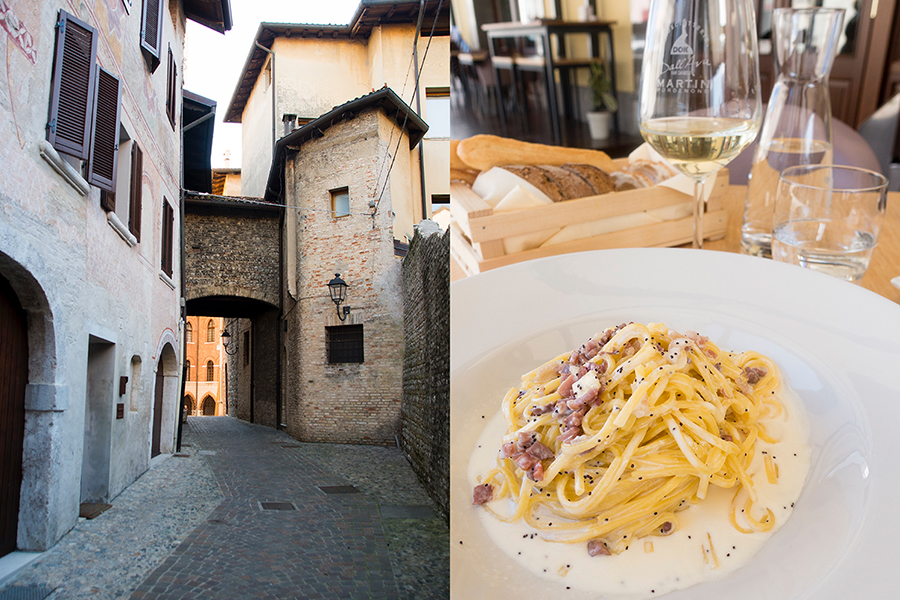 The bus dropped me off in via Dante which my host told me was a brief walk to the central bell-tower (campanile), next to where my accomodation was located. My fancy new suitcase with multi-directional wheels glided relatively easily over the cobbled stones in the streets in the historic centre of town (centro storico) and although the walk was not brief, it was straightforward and I happened to arrive in time to see the Saturday morning markets: fruit and vegetables, cheese vans, street food vans and clothing stalls. I thought they would still be on after I checked in at 12 noon – I was looking forward to some street food (they were selling fried fish – I could smell its deliciousness as I was walking through) and taking some photos. Sadly they were packing up when I went back out into the streets and the fish was all sold out.

I managed to get a couple of phone snaps of the remains of the market and then walked around looking for a place to have lunch. My host had recommended a couple of osterie and trattorie and I ended up at Fratelli Martin where they specialise in aged prosciutto San Daniele (the town of San Daniele is just up the road from Pordenone). Feeling very hungry, I decided on a plate of ribbon-like tagliolini (sort of like linguine) with a creamy sauce, poppy seeds and prosciutto San Daniele, accompanied by a glass (well it was two actually) of a white blend of Istrian Malvasia and Friulian Riesling. 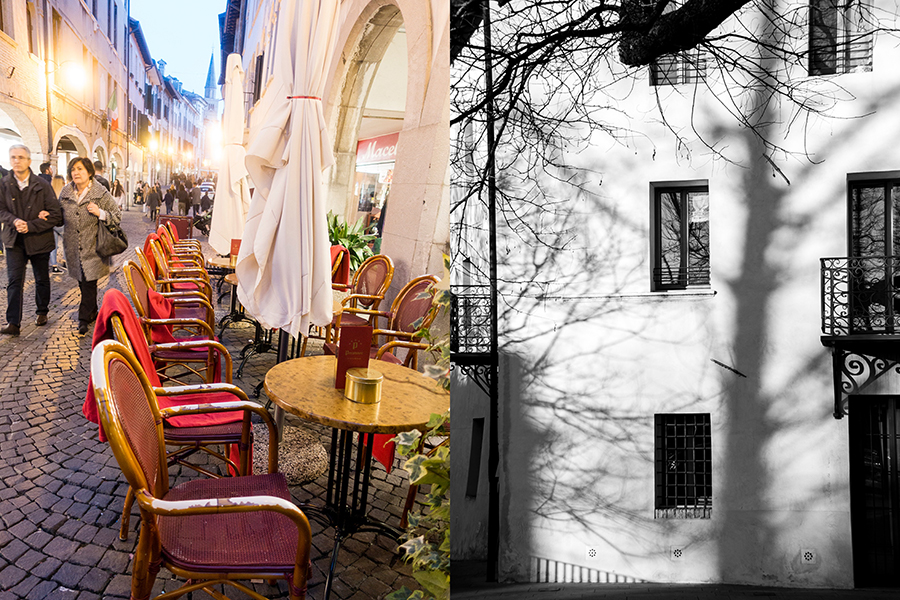 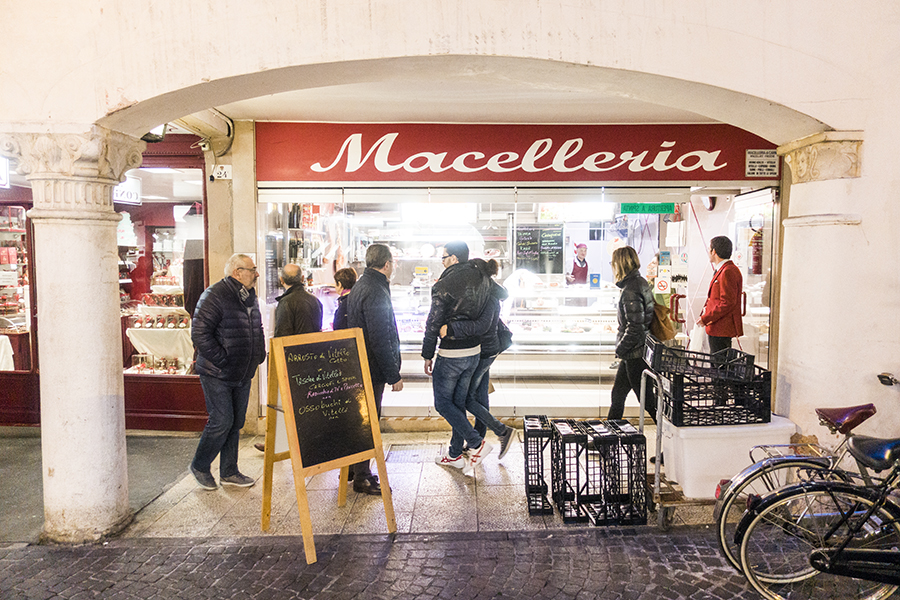 The next few days were spent wandering though the town, starting with its remarkably well preserved Palazzo Comunale, the Duomo of San Marco and along the length of Corso Vittorio Emmanuele II, which is where you stroll for an evening passeggiata, stopping at one of the many bars for a spritz or two. Pordenone sits on the River Noncello (Pordenone=port on the Noncello), which for hundreds of years was the main travelling route between Pordenone and Venice (prior to trains). A network of parklands surround the river including Parco Galvani, Parco Valentini and Humus Park, with bike paths and stretches of water – green and very pretty. Bicycles seem to be very popular both in the town and alongside the waterways – with age appearing to be no barrier to going for a ride. 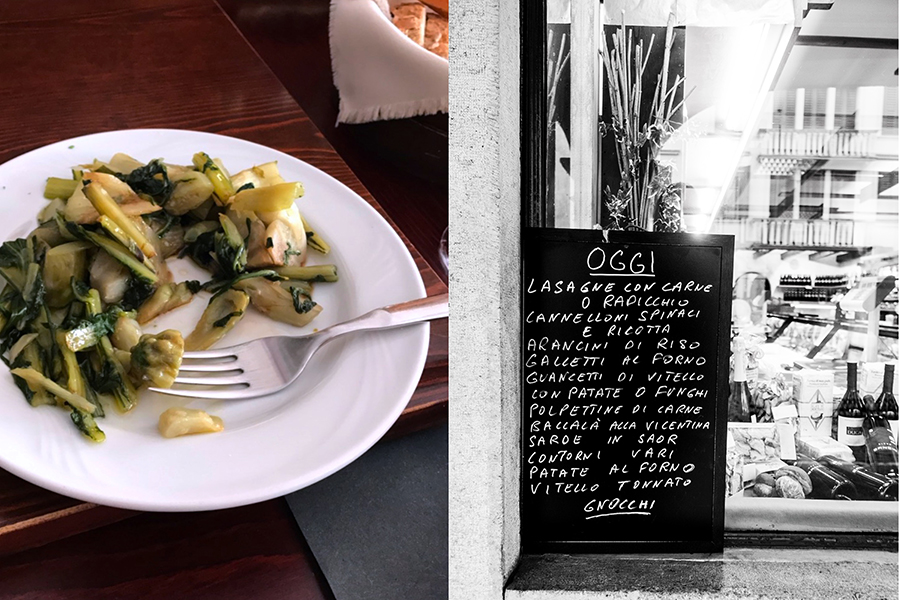 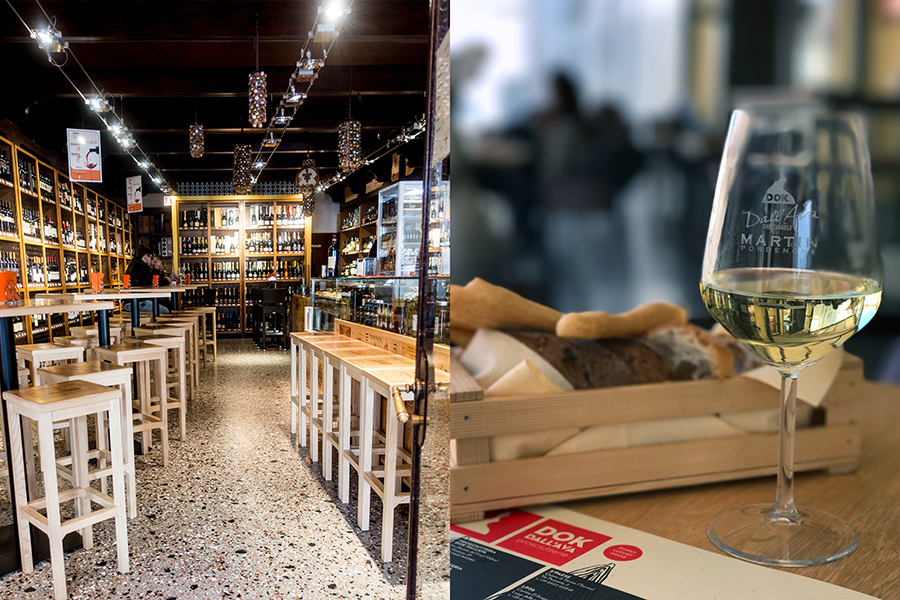 I wanted to taste traditional food and Osteria La Ferrata came highly recommended. It was sadly fully booked for Sunday lunch and they couldn’t even fit one person in (which speaks for itself about the quality) so I went to nearby Osteria del Cavaliere Perduto (lost horseman) instead. It was also full but they managed to squeeze me into the high shelf next to a row of books, surrounded by several rather curious looking witches on broomsticks hanging from the walls and ceiling. I later found out that witches are a big thing in Friuli, mainly good witches (benandanti), that traditionally protect the crops and help ensure a good harvest. Lunch was a plate of potato gnocchi with a rabbit ragu’ and a side of stewed puntarelle (a type of chicory), dressed with olive oil and vinegar. I am not sure if the benandanti had much to do with the quality of the lunch, but I enjoyed it very much. In fact I enjoyed Pordenone very much and look forward to telling my zia Dina what she has been missing out on when I next see her. 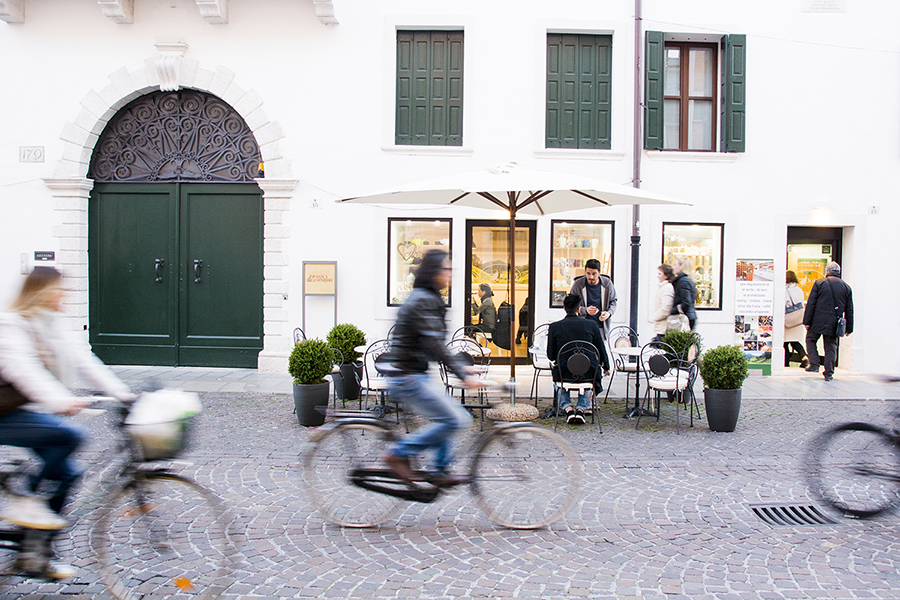 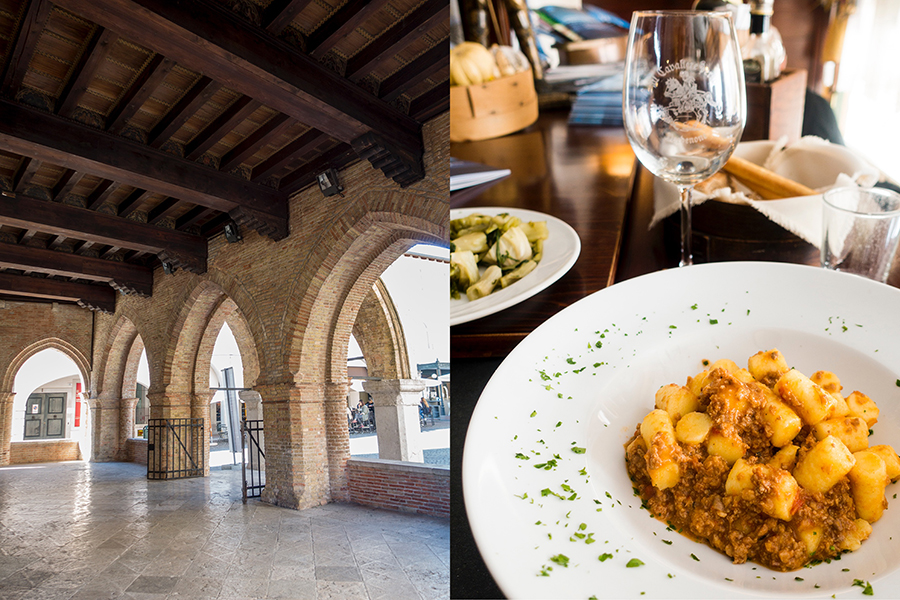 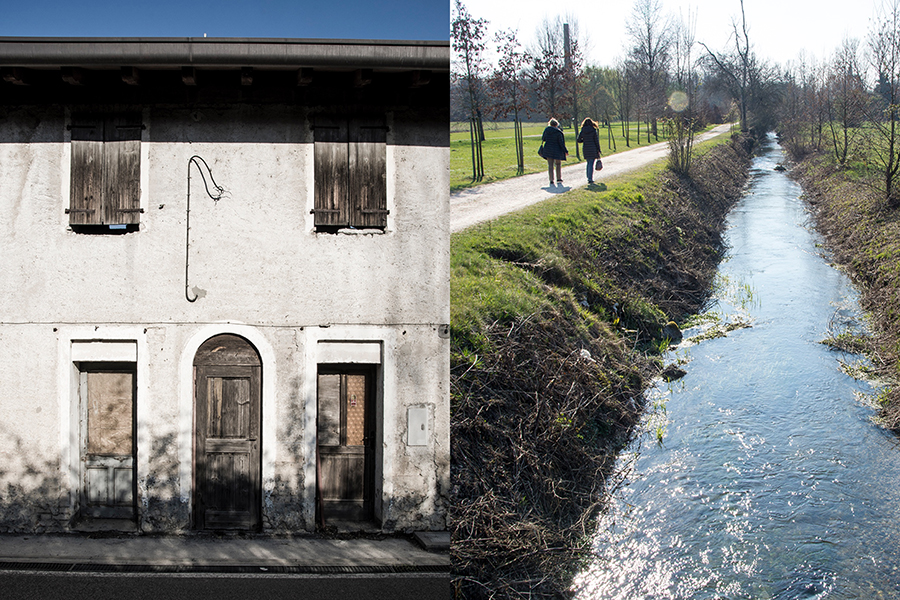