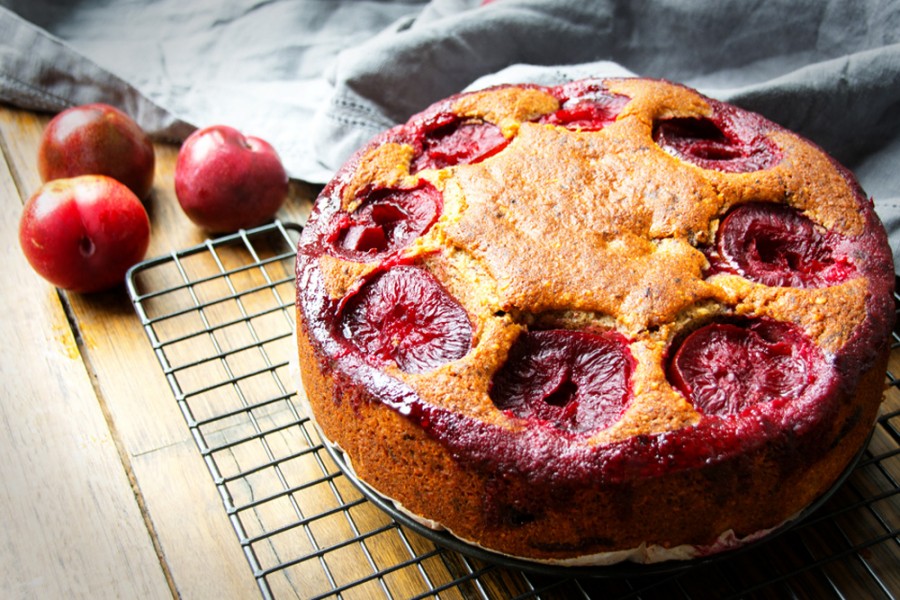 This year we had so many plums on the trees at mamma’s place, she kept saying: “I have never seen so many plums and they are so big….”. Last year there were hardly any as the trees were pruned too late in the season, so it makes sense that this year the trees went all out and produced so many. Of course all three trees had plums that ripened at the same time, so between my sister and I, we made three batches of jam at mamma’s last week. It was lovely making the jam with her as she cut up most of the fruit and prepared the jars, which is what my father used to do to help (the recipe I used for the plum jam is here). 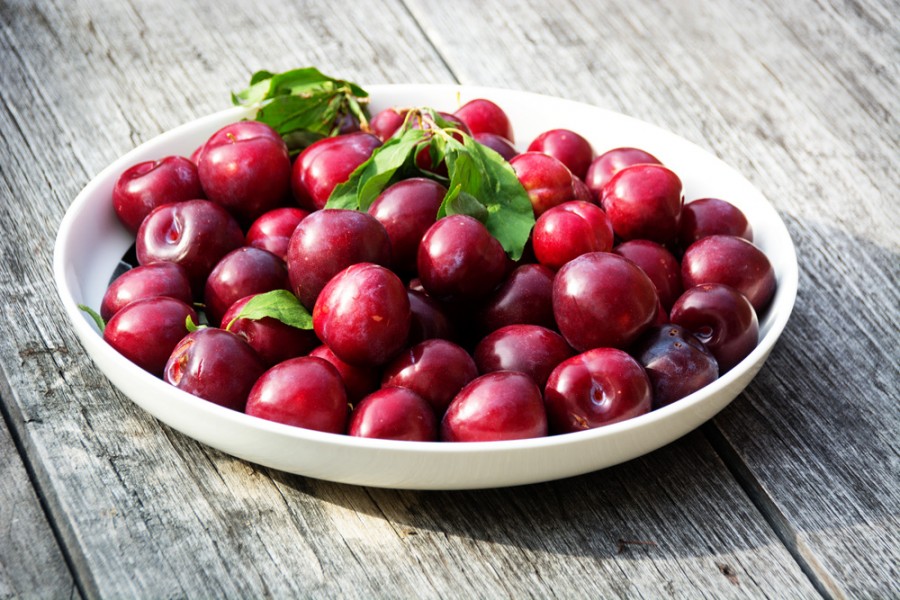 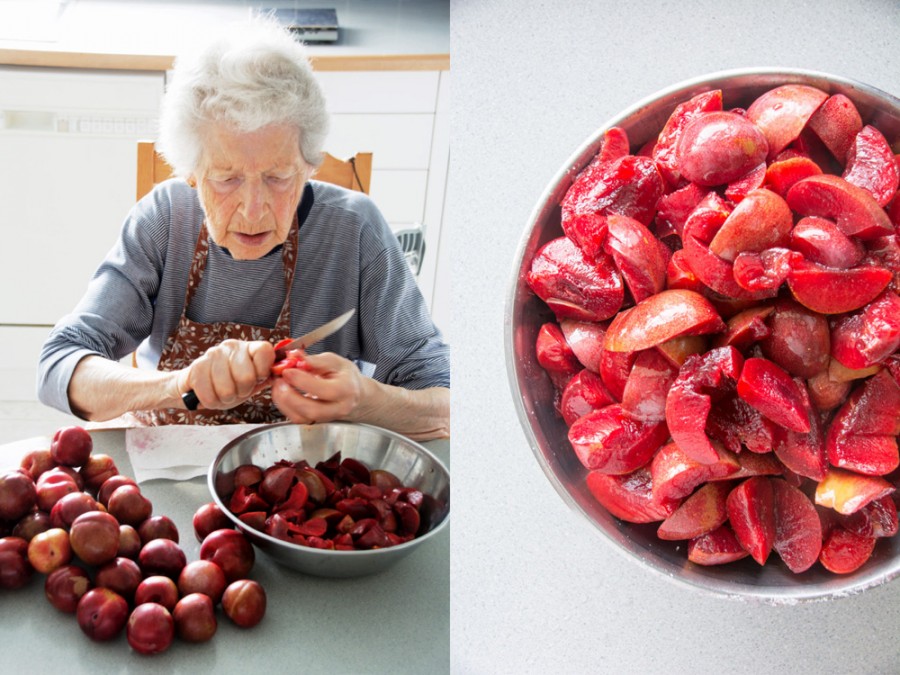 In addition to giving away bags of them (the council cleaner was pretty happy when I handed him a large bag of just picked unsprayed ripe plums), my sister and I took baskets of them home. I have been stewing batches with cinnamon, star anise, orange juice and maple syrup and having them with yoghurt for breakfast every day. I have also halved then frozen a few dozen of them. A work colleague suggested this brilliant tip – she then has them for months afterwards, popping the frozen halves in cakes or in smoothies. And I also baked a few cakes, this being one of them. I made it for afternoon tea on Friday as I was going over to mamma’s place to see cousins I had not seen for years.

Vanna and Mimma are daughters of a first cousin of my father, who migrated to Australia (by coincidence) on the same ship in 1950 that my parents came out in. Apparently papa’ bumped into his cousin Bruno in the migrant camp of Cinecitta’ in Rome and they discovered they were both planning to migrate to Australia. After arriving here the families saw each other every now and then, less since my father passed away.

It was great to catch up with them again, we had a great afternoon chatting, drinking coffee and eating cake. Mamma got out old photos to show them including one they had never seen. It was from the 1960s when the family had gone to Station Pier to send off my sister and mother who were going back to Italy for a long holiday. My father is in the foreground with a bottle of Chianti in his right hand, his cousin Bruno is behind him and all the other members of the family are in that bottom right hand corner. Looks like it was a great party send off! 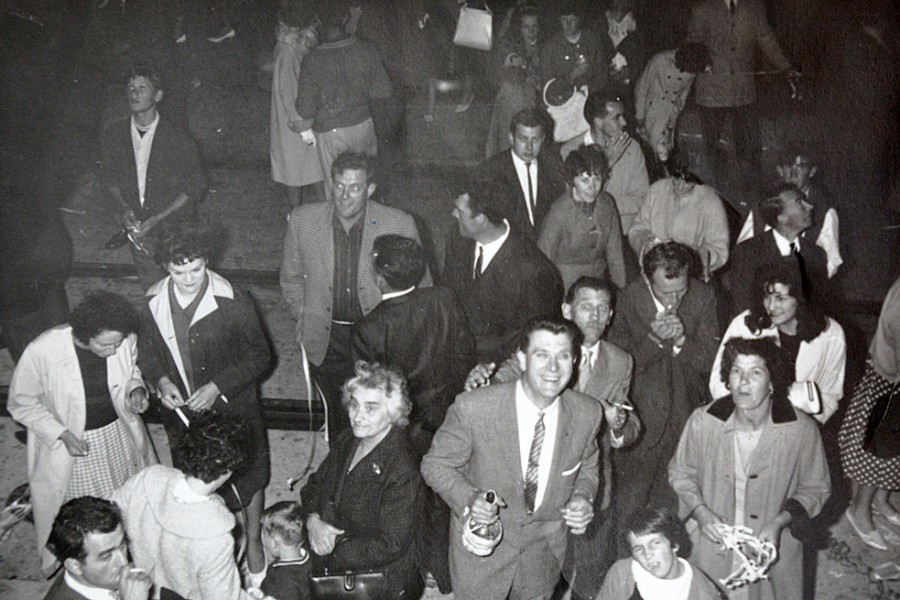 There was cake remaining after the guests left, so I sliced off a quarter and left it with mamma, so she could enjoy it over the weekend. It is a lovely moist torta which has plum halves on top but also chopped within it. Pieces of dark chocolate are studded throughout and they become hard as the cake cools. It has a mixture of flour and hazelnut meal in the batter – you could use almonds instead. I still have a basket of fresh plums so I will no doubt make the cake again this week, since this one was gone in a day. 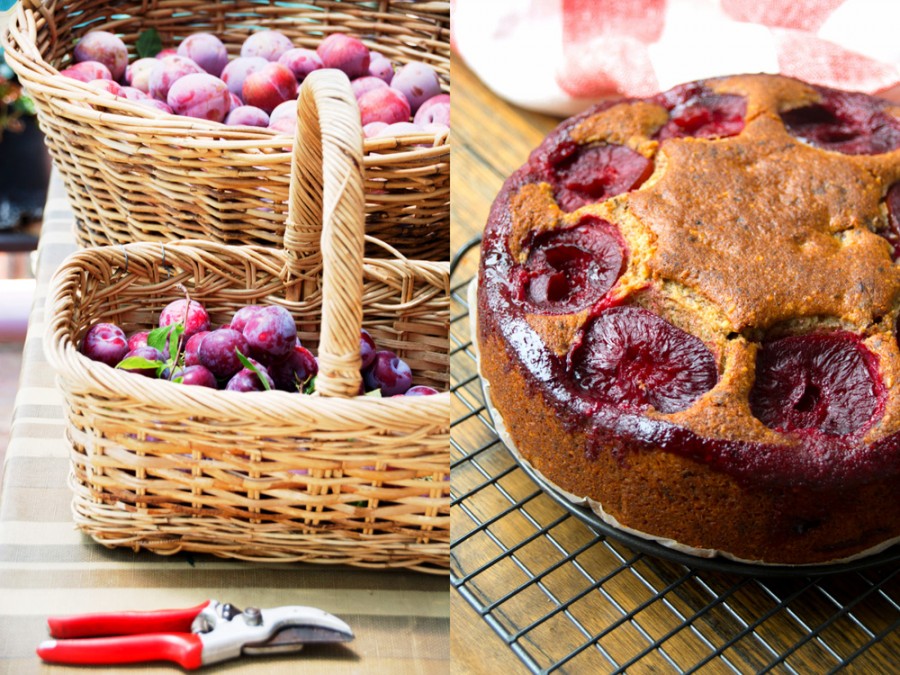 And a big thank you to all of you who volunteered to test recipes for my up and coming cookbook. I now have plenty of testers and will not be able to accept any more. I have been in touch with most to ask you questions and I will start sending out recipes in the middle of February. Exciting times!!

Line and grease the base and sides of a 23cm cake tin with a removable base. Preheat the oven to 180C.

Cut four plums into half (they will be used to place on top of the cake) and chop the rest into smaller pieces. Set aside.

Place the butter and sugar in a large bowl and cream using a hand-held beater (or use a kitchen mixer). Beat in the eggs until well incorporated. Fold in the flour, baking powder, salt and hazelnut (or almond) meal. Then fold in the chocolate and lastly the roughy chopped plums. Place into the prepared tin. Now arrange the plum halves cut side up on the top of the cake mixture and push them down slightly.

Bake for 60 minutes or until a skewer inserted comes out clean. Allow to cool to room temperature before cutting and enjoy on its own or with a bit of Greek yoghurt or sour cream on the side. 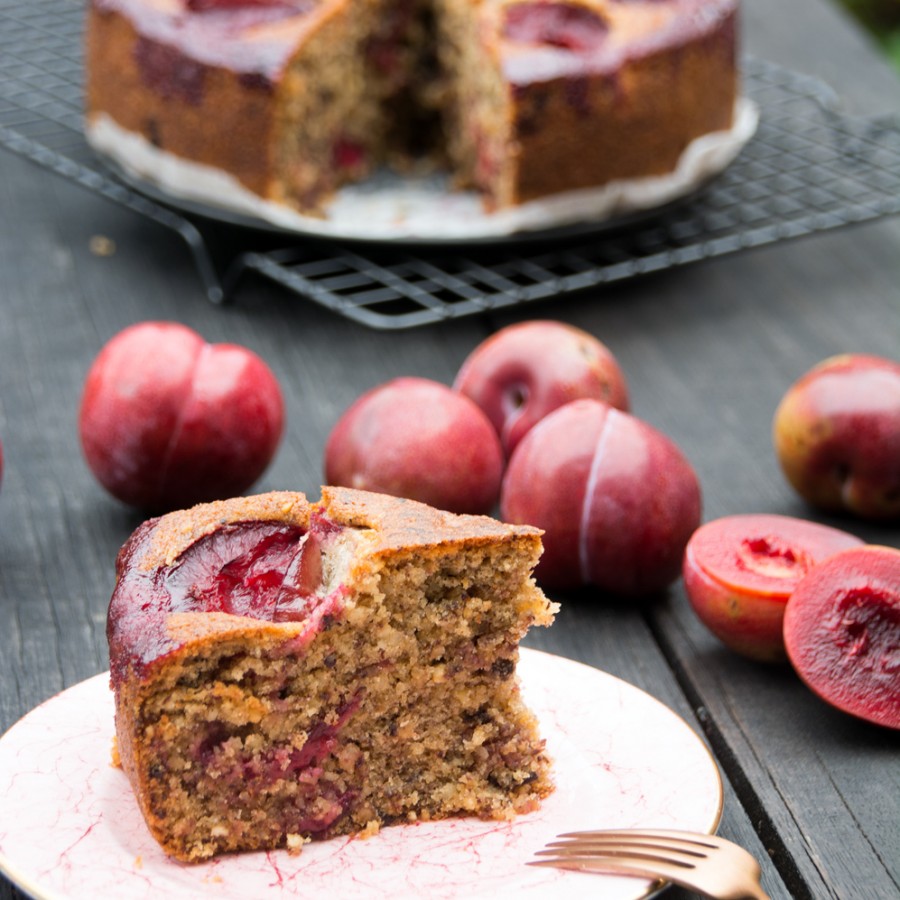