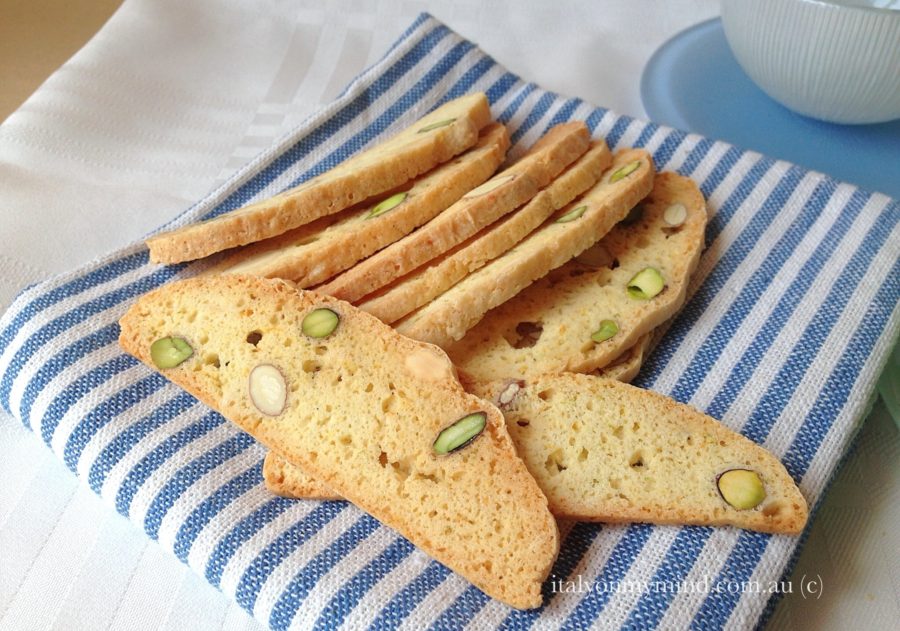 Most webpages that I have read assign the origin of biscotti (biscuits/cookies) to the Romans. Of course it was the Romans. If I remember Monty Python’s movie “Life of Brian” correctly, they were responsible for a whole lot of things – the aqueduct, sanitation, the roads, irrigation, medicine, education, public baths, the wine and….. biscotti it seems.

Biscotti literally means “twice-cooked” (bis=twice, cotti=cooked). My mamma used to make traditional simple biscotti with almonds – cooking the log shaped dough once, then slicing it and putting the thin biscotti on trays in the oven to cook a second time. This allowed them to dry out completely and become crispy – perfect for dunking. The biscotti I made a few weeks back were based on a terrific recipe I found on the SBS Food Safari website. The recipe called for two kinds of nuts (pistachios and almonds), three kinds of citrus zests (lime, lemon and orange), the seeds of a vanilla bean in the dough plus a large dash of Sambuca (which is aniseed flavoured liqueur). When I first saw the recipe, I considered leaving out several of the ingredients as I thought that the taste would be too complex. I started off by reducing the sugar by 1/3. Then I started experimenting with the flavours – as I was making the dough, I kept tasting it, to see how each ingredient that I added would work with the other. No changes were needed. All the ingredients complemented each other perfectly – it was delicious.

I had been put off making biscotti for years because of the double handling. What made it so much easier is having a thin-bladed sharp knife to slice the cooked log of dough. It also helps to have multiple baking trays to speed up the second baking. These thin crispy biscotti are ideal for dunking and serving with tea, coffee or a glass of sticky wine (vin santo). The green pistachios make the biscotti look more festive than plain ones with almonds, and the zests and aniseed flavour make them into a real delight. They keep for many weeks in a sealed container so are handy to have when guests drop in. The recipe below makes two large logs, so 80-100 thin biscotti. Or you can cut the log into thicker slices to make thicker biscotti (that look more like cantucci). You can also easily halve the quantities.

If you would like to see John Cleese and the other Monty Python boys telling us exactly what the Romans have done for them in the movie “Life of Brian” the clip is at the end of this post. 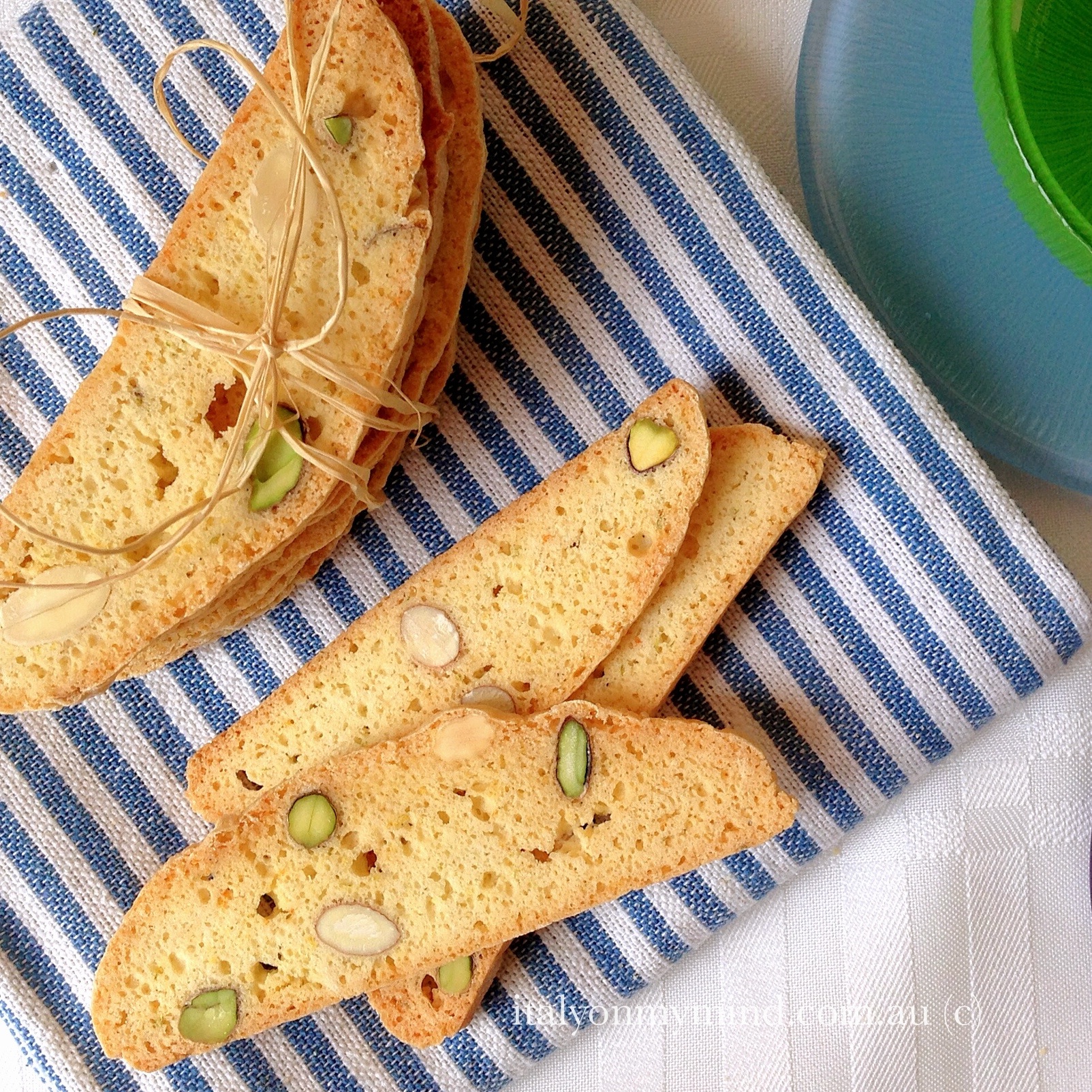 Place the flour, sugar, baking powder, salt, nuts, zests and vanilla bean seeds in a large bowl and stir. Add the eggs and Sambuca, mixing well with a wooden spoon until a dough forms. It will be quite soft. Form two logs with the dough, with a diameter of approximately 5cm. Wrap them individually in cling film and place in the fridge to rest at least 30 minutes (or several hours).

Heat the oven to 180 degrees. Place the logs (after removing the cling film) on an oven tray lined with baking paper. They will spread a bit so leave some space between the two logs. Cook for 15 minutes or until golden. Remove and place on a wire rack to cool.

When the logs have cooled (they can still be warm), cut into thin slices. Lay slices on baking trays and cook in a 160 degree oven for 10 minutes or so, until they are slightly golden and start to crisp. Thicker ones will take a bit longer to cook. Taste one and try – cook a bit longer it they are not crisp enough – and cool on a wire rack before eating. Remember that they do crisp up when they cool. Store in an airtight container. 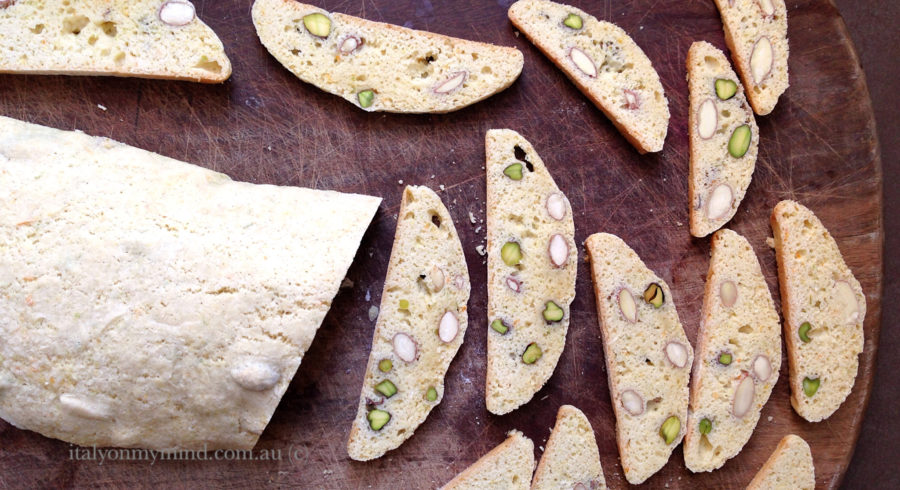 “Life of Brian” (1979) is one of those hilarious movies that you can watch over and over. I know quite a few people who can recite many lines from this movie (including me if you ask nicely). The “what have the Romans ever done for us” clip is an absolute classic.