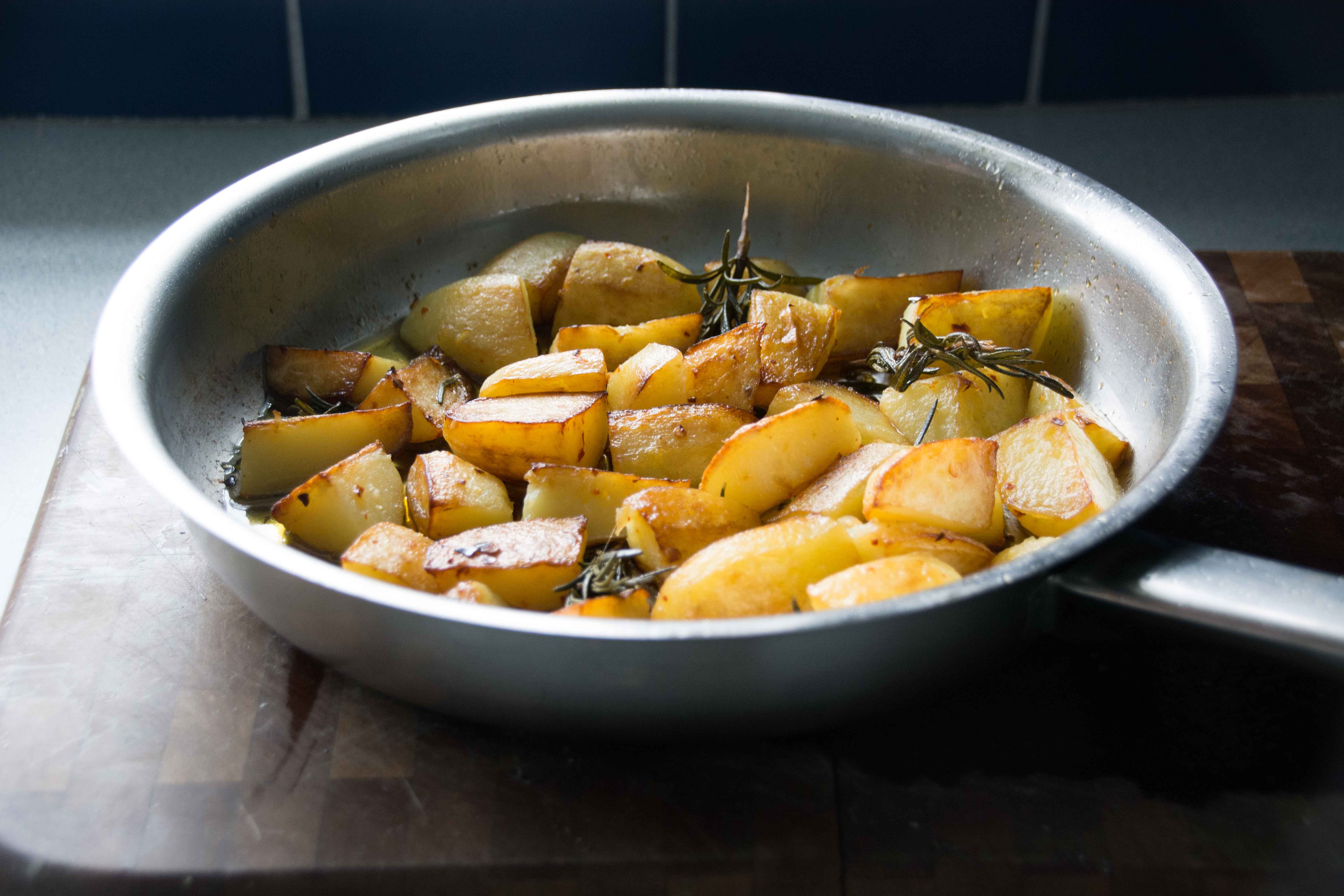 Those who migrated to Australia back in the 1950s and 1960s from Europe, did so for many good reasons: for financial purposes, or work opportunities. Essentially they left their country for a better life. But they left a lot behind, during a time when travel back to Europe was a month on a ship (rather than a 24 hour flight), phone calls were expensive and letters took several weeks to arrive.  They tried to recreate cultural traditions here but the extended family was sorely missed. Growing up as children of migrants we were far away from my grandparents (my nonni) in Italy. My school friends would talk about visiting their grandparents on the weekend or having family celebrations that included their nan and pa and I felt that there was something missing from my family in Australia. I believe I actually missed the idea of having grandparents close by (rather than having my actual nonni around). I never got to know them very well, in particular my nonno, who I never saw after those early years I spent in Italy during primary school. My strongest memory of nonno Francesco (or Checo [pron. ke-koh] as they used to call him) is that he always wore a hat, even at home, just like the man on the label for a beer from Friuli called Birra Moretti. For years I liked to think that it was my nonno, wearing his hat, on the beer bottle label (photo of him on the right in the late 1940s with mamma standing on the step of the doorway of the bar they owned in Monfalcone). 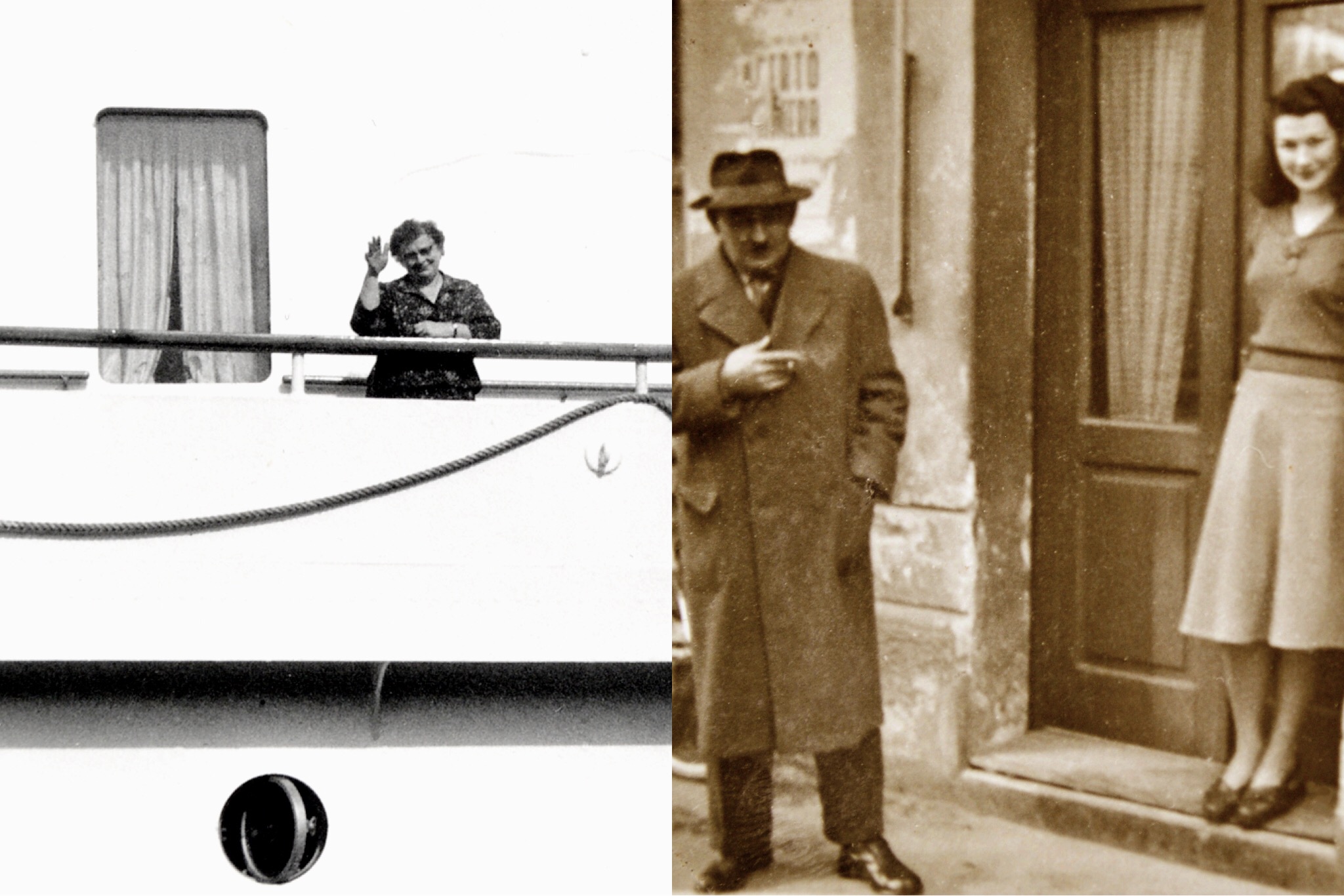 I remember my nonna Carolina much better than nonno. She visited Australia twice – once in the late 1950s (you can see her waving when she was on the ship returning to Italy above on the left), then again in the late 1970s. I also lived with nonna (and my aunt and uncle) when I went to high school in Italy for a year. I have lots of memories of her including each week when the eggs and (live) chicken were delivered by a Slovenian lady (who I gather lived on a farm and not only dressed in somber colours but wore a curious scarf on her head and had most teeth missing). Nonna would deal with the chicken (I didn’t think too much about what she was actually doing to the chicken) in the laundry sink and for dinner that night we would have the tastiest chicken broth. 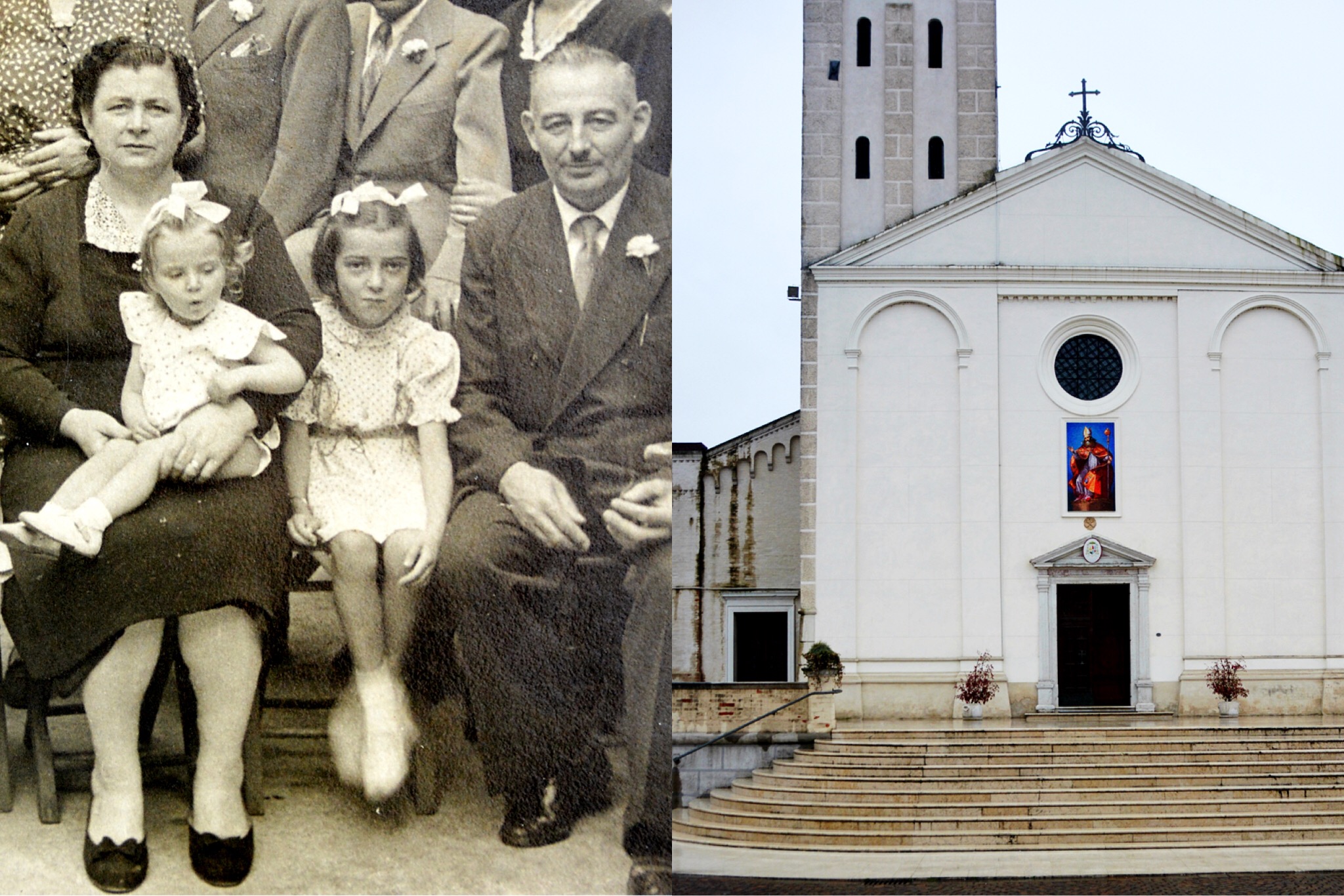 If you listen to my mother though, nonna was a terrible cook and she often burnt the food she was cooking on the wood fire stove top. As she’d had five children in six years, I imagine she was terribly busy – no wonder she paid little attention to cooking. Living in the tiny town of Mansue’ in Veneto, they cooked with farmyard animals such as chickens, and ate a lot of eggs, beans, potatoes and polenta. I love the stories that mamma tells me of growing up in Mansue’ and the time they spent there “sfollati” during World War II. There are lots of food stories – making ricotta and butter, making salame from their pig, fruit picking (and eating more than they picked) and my nonna-bis (great grandmother) eating raw eggs each day straight from the chicken coop. 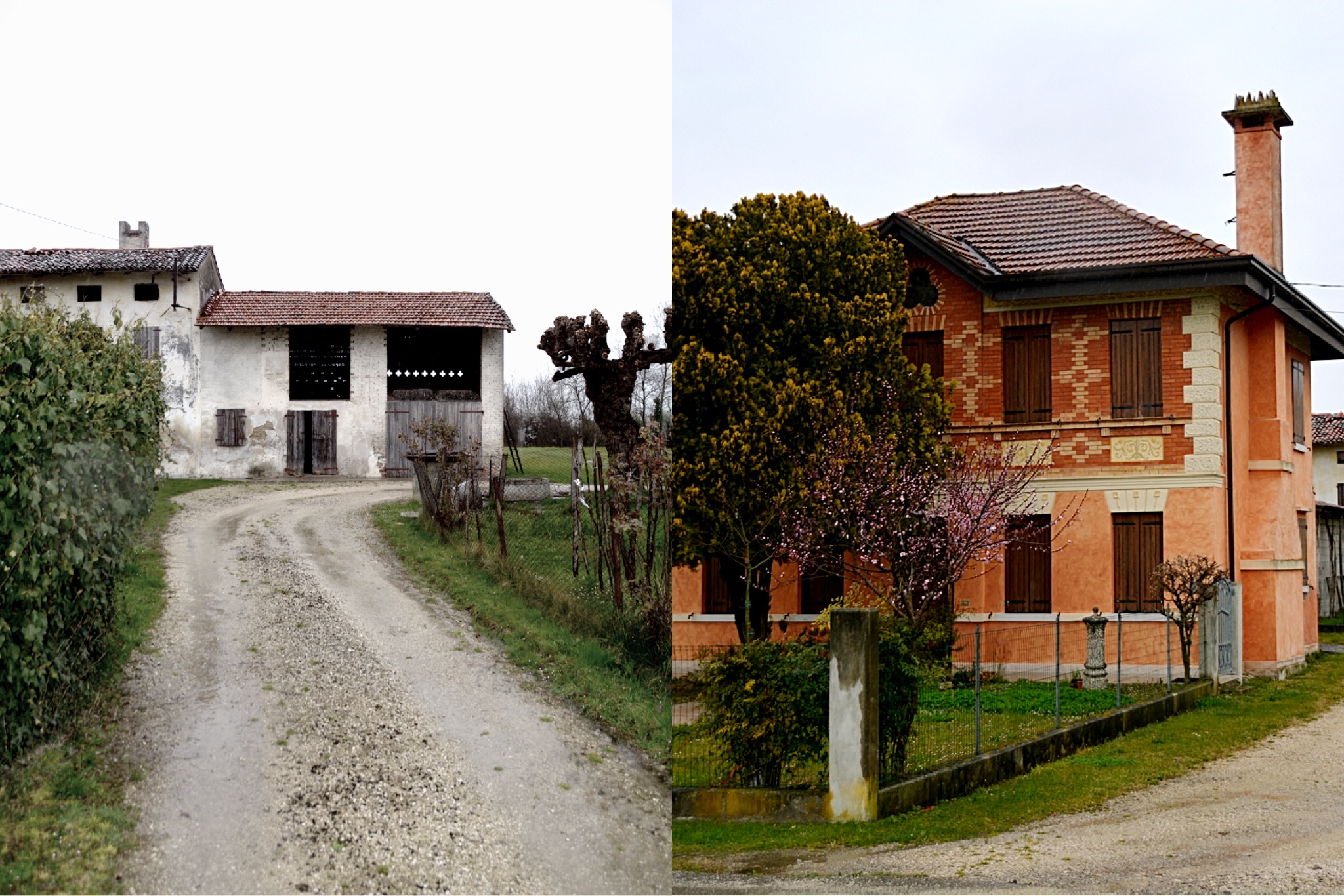 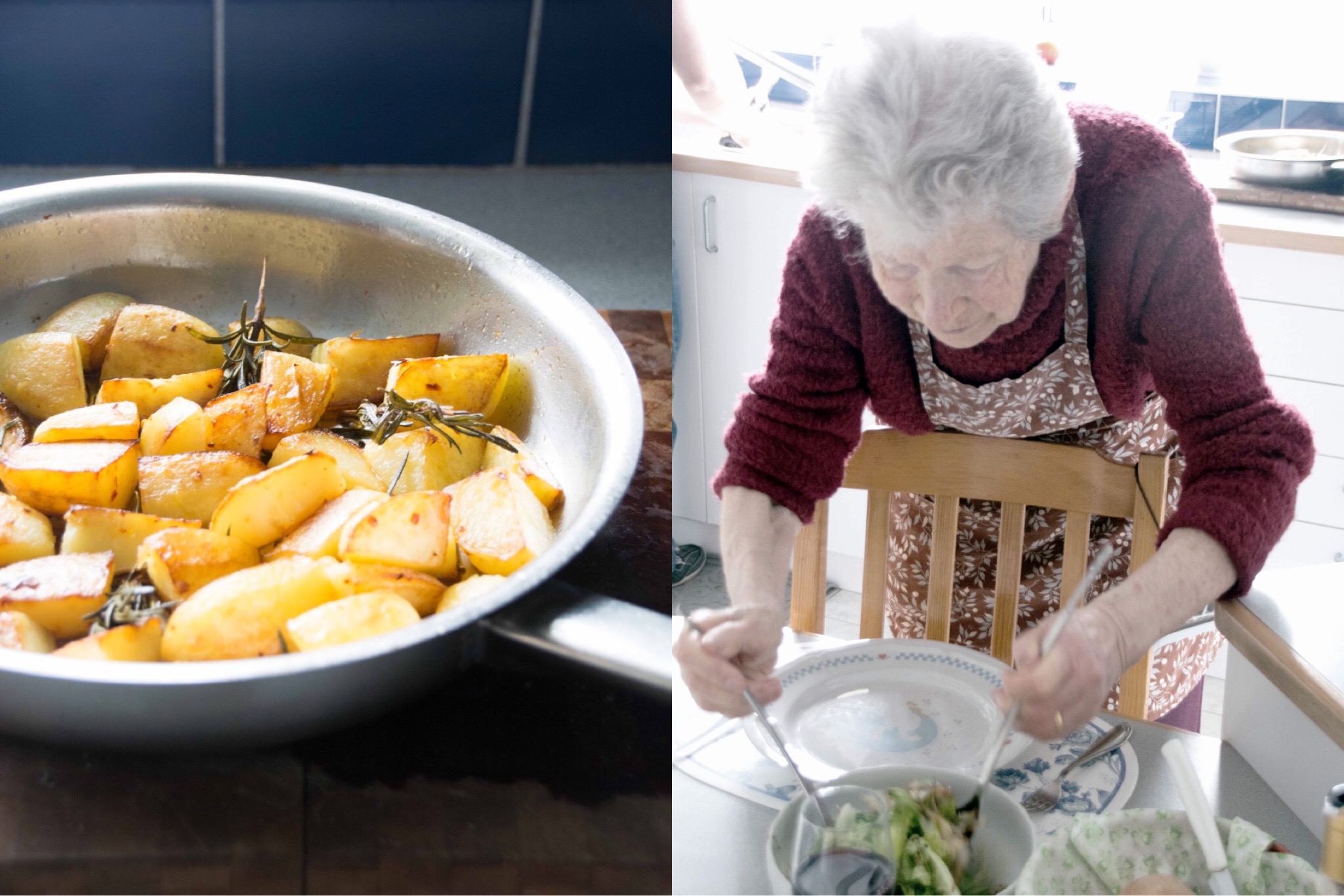 Mamma learnt to cook once she had left home and married my father, retaining some of the dishes her mother cooked – polenta, pasta e fasoi (beans and pasta) and potatoes with rosemary. On the weekend mamma made potatoes the way she remembers my nonna did, though she qualified it with  “ma le sue iera sempre bruzade” (but hers were always burnt). I told her that I had never made them at home, which she found hard to believe. “They are so simple!” she told me. You peel and halve or quarter your potatoes, pop them in a pan with a bit of olive oil and fresh rosemary and cook them until they are tender.

I guess mamma has all the time in the world to cook now – and she loves showing me – she flipped the potatoes frequently as they cooked to make sure they did not burn. And they were perfect – caramelised loveliness on the outside and comforting soft potato on the inside.

2 medium or one large potato per person (I use Desiree or other good roasting potatoes)
Olive oil for cooking (2-3 tablespoons)
1- 2 large sprigs fresh rosemary
sea salt
chilli flakes
Peel and cut the potatoes into halves or quarters. Place oil in a frypan, enough to cover the base of the pan and turn the heat to medium-hight and add the potatoes, plenty of salt, the rosemary sprig cut into a few pieces and chilli flakes to taste. Turn the heat down to medium-low, cover the frypan with a lid and leave the potatoes cooking in one side for around 10-12 minutes until they have browned on one side. Then flip them over for the other side to cook. Check the potatoes after about 5 minutes, continuing to flip them as required and occasionally shaking the pan so they do not burn. They will take about 30 minutes to cook (depending on how big or small you have cut them) – taste them to be sure and add more salt if needed. 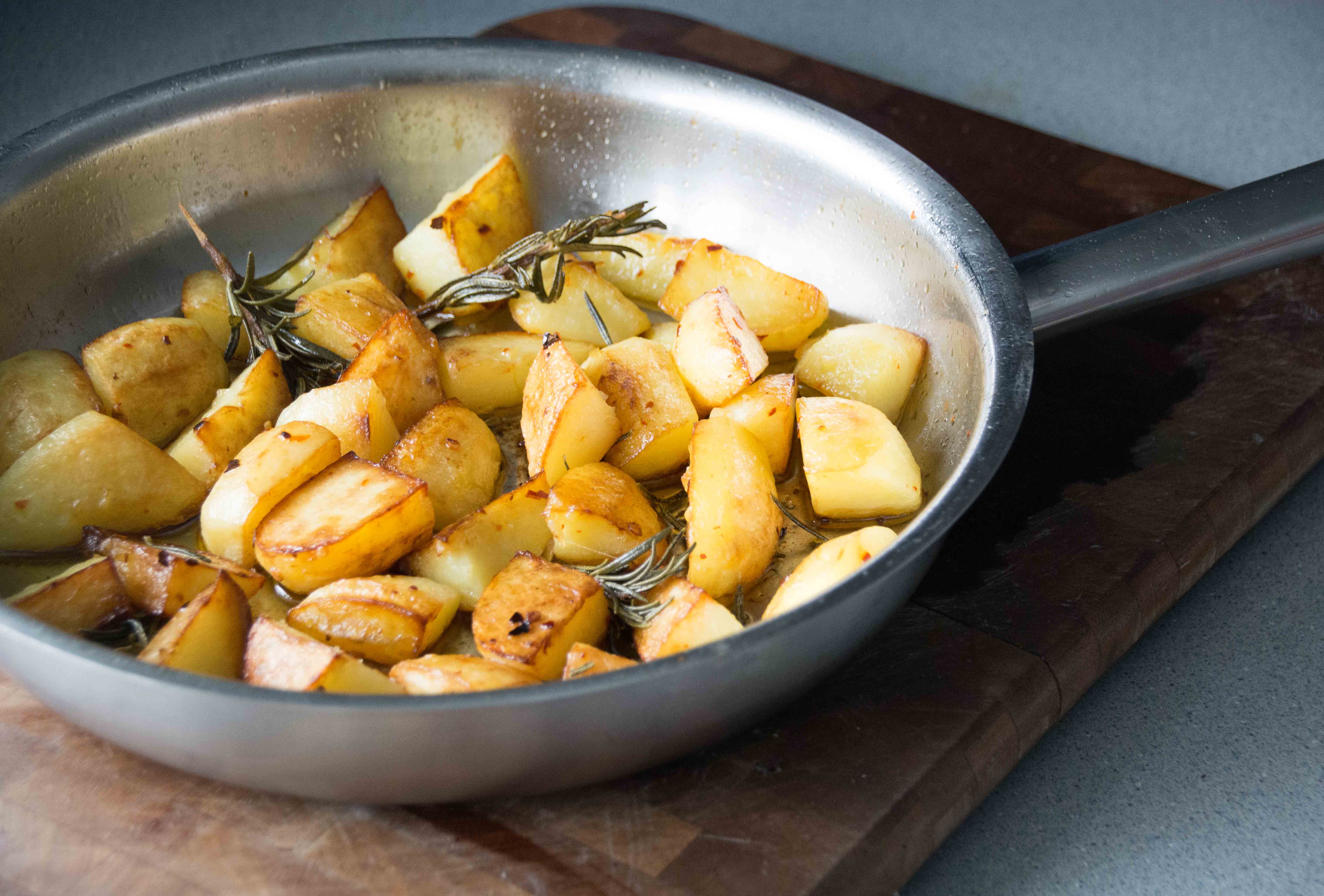