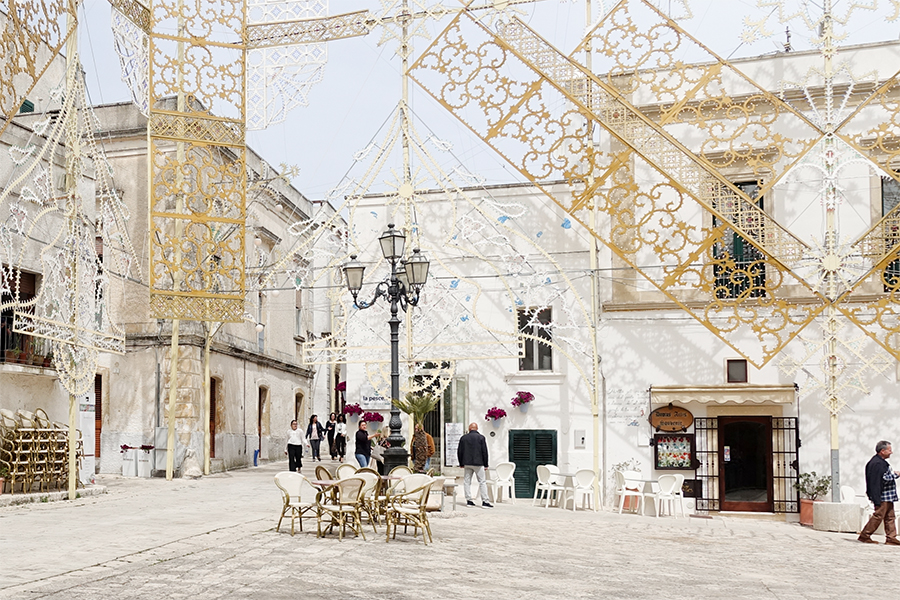 The last week of April couldn’t have been more beautiful – six nights in the south of Puglia, on the tip of the heel of Italy’s boot shaped peninsula, running a tour through Southern Visions Travel – eleven enthusiastic participants, accommodation in two traditional masserie and a wonderful local guide. While we are talking numbers, here are a few more: we met three nonne (grandmothers), one as planned and two by chance, as we walked the streets of a town in the heart of Puglia where Griko is spoken, a language that is closely related to ancient Greek; we had two cooking classes, one using wheat grown organically on the property where we were staying, which was milled just before we used it; we visited two additional masserie, one where we learnt about olive oil and another where we learnt about wine (and tasted all of it); we boarded five colourful gozzi which are small wooden fishing boats and sailed the waters beneath the cliffs at Polignano a Mare looking for octopus. We also ate a lot of delicious Pugliese food and drank more than our fair share of Pugliese wine. There was also gift giving and I (together with all the other participants) have a very pretty white ceramic pumo, a Pugliese symbol of spring and prosperity, to take back home as a small reminder of these memorable six nights in southern Puglia. 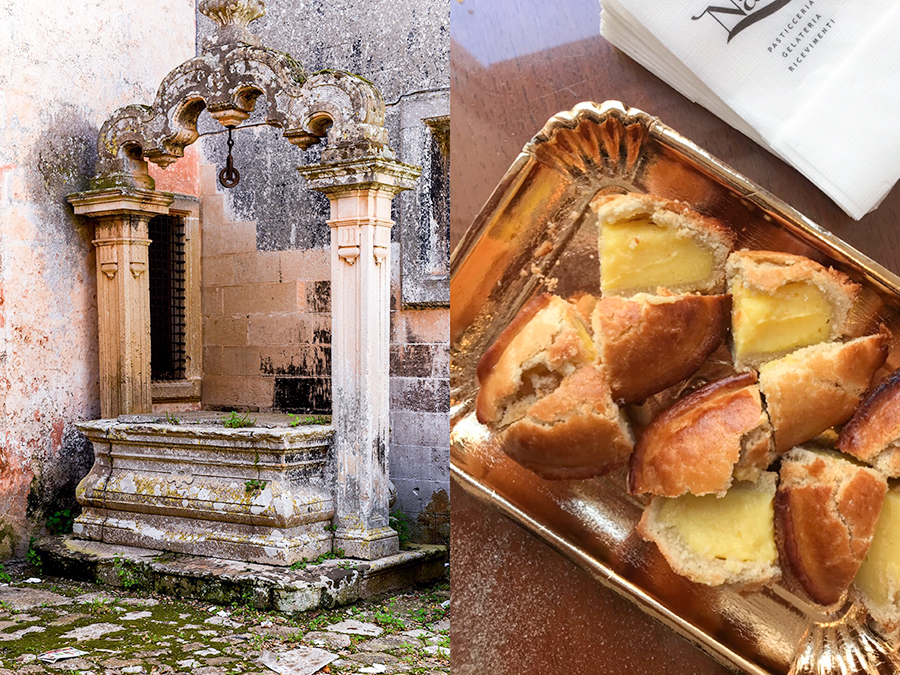 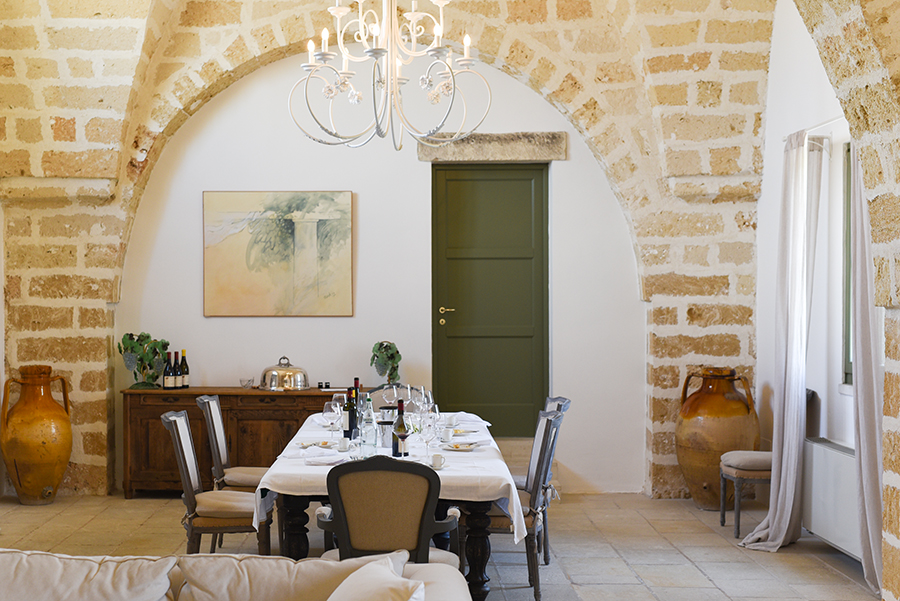 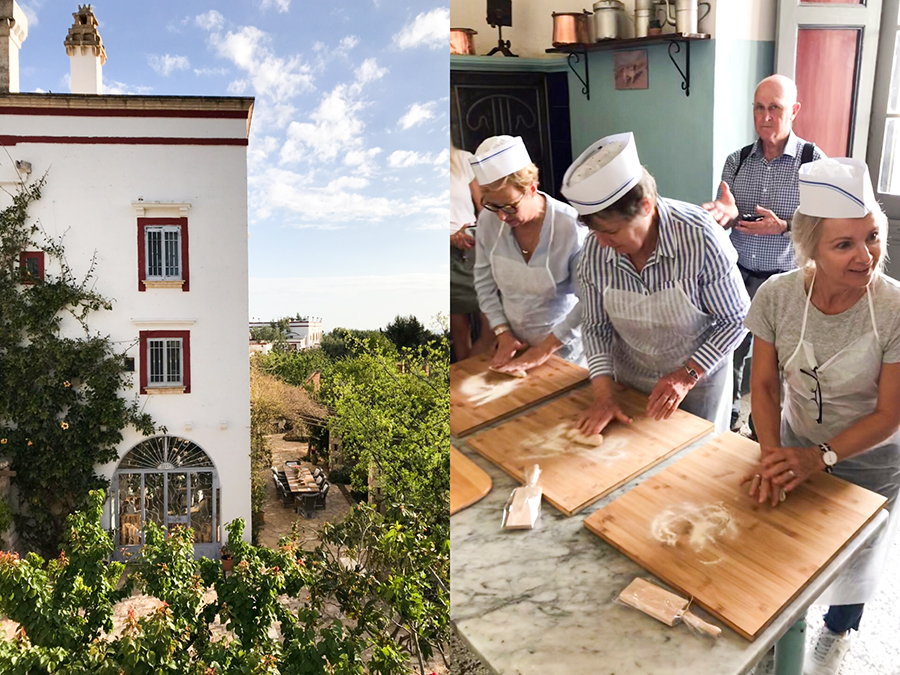 The tour program was broadly split into days that focused on different culinary ingredients – olive oil, seafood, wine, wheat and cheese, items that I had explored in my cookbook Adriatico when I was researching the food of the Salento (which is what southern Puglia is called).  So it was a foodie tour, but not one where there was a lot of hands-on cooking. It was more about exploring the ingredients, meeting the producers, understanding the culture and creating experiences that stay with you for a life time. Food is central to the Pugliese way of life so when you talk about food, you talk about the people and the land, their lives and their families. Although we visited the towns of Otranto, Polignano, Lecce and Ostuni, which are on the tourist trail, much of our time was spent exploring smaller towns and local producers, immersing ourselves in culture and history, seeing Southern Puglia with an insider’s knowledge.

Shared meals at a dining table were a key part of our experiences and needless to say, the food was seasonal, local and plentiful. The cooks and chefs generously shared their recipes when we asked for them (and I plan to share these with you once I get back to Australia). And there were some spontaneous stops along the way, to the town of Castro that just happened to be holding its annual street festival of the Annunciation (the streets were lined with luminarie), to an underground olive press and a poetry recitation in Griko. 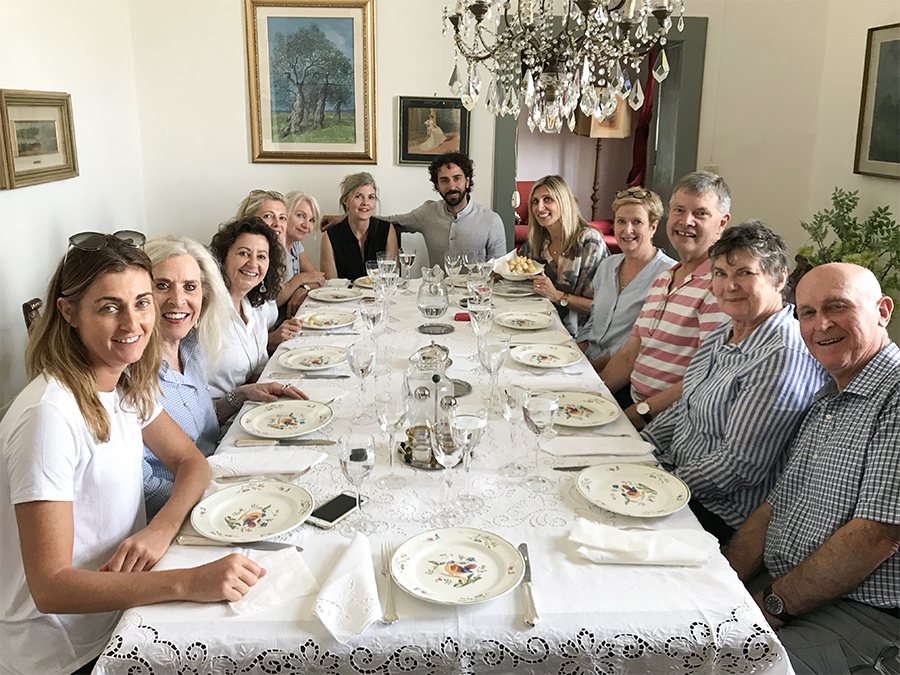 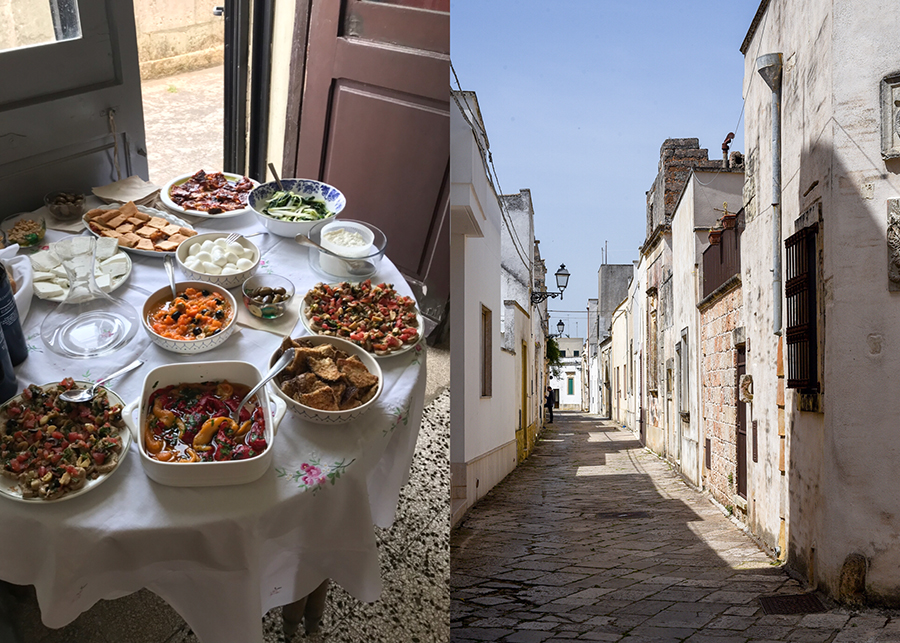 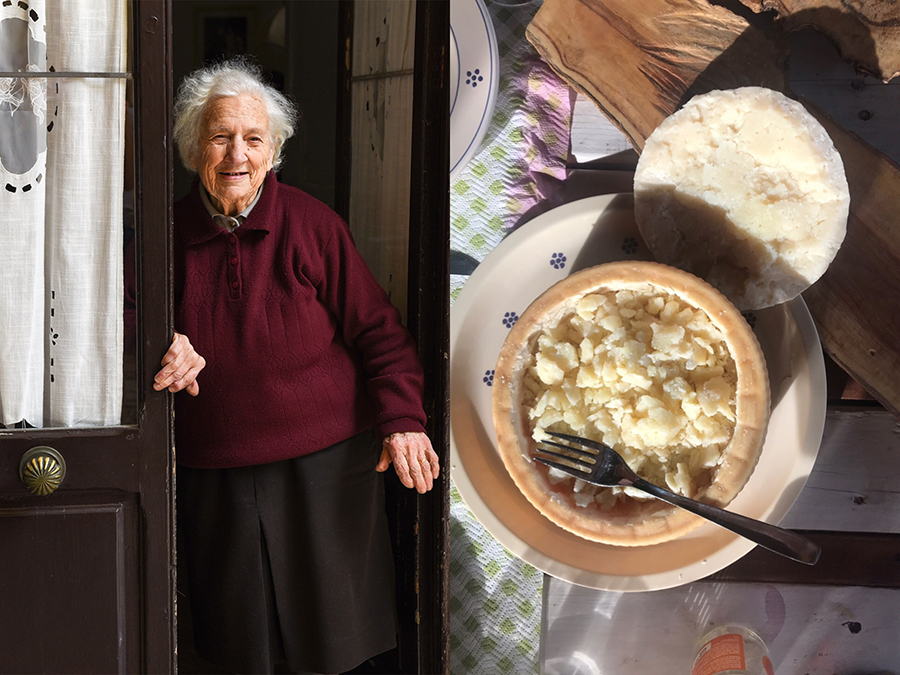 I posted many photos and videos on instagram – they are still up in my highlights (Puglia Tour 1 and Puglia Tour 2) if you would like to get a real feel for what it was like to be on the tour. If you do not have an instagram account, then I hope these photos will tell the story of this week of immersion in the Salento.

The tour participants were wonderful and enthusiastically involved in every meal and activity, so a huge thank you (and a big hug) to each of you: Judy, Joan, Kate, Kate, Donna, Ann, Rob, Bernadette, Julie, Rod and Rosemary. Thank you to Ali Pike and the team at Southern Visions Travel who arranged the tour with such precision, and last but not least, thank you to our local guide Giuseppe. By the end of the tour I think we all had a bit of a crush on him – well I know I did. It all started when he sang us a traditional Pugliese love song in the microphone when we were driving in the bus down to S Maria di Leuca, that talked of the sea, longing and unrequited love. His passion and knowledge for the Salento was infectious. I cannot wait to work with him again for the tour in 2020 (details to follow shortly!). 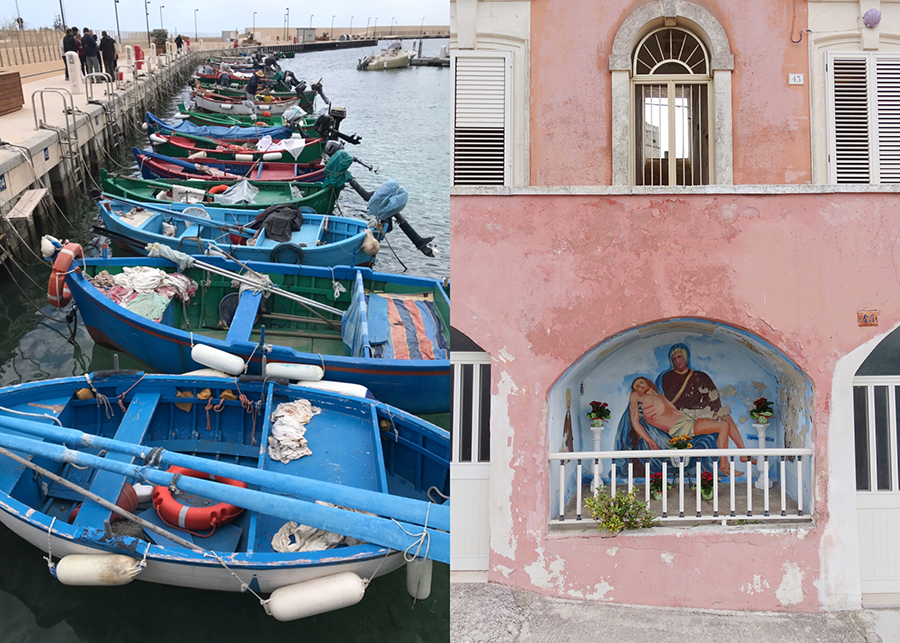 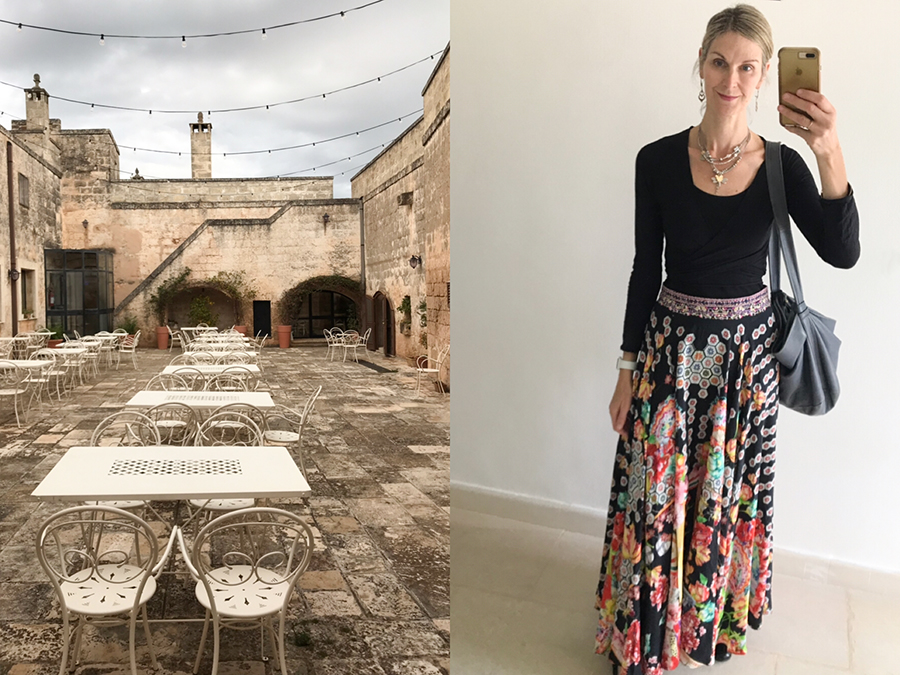