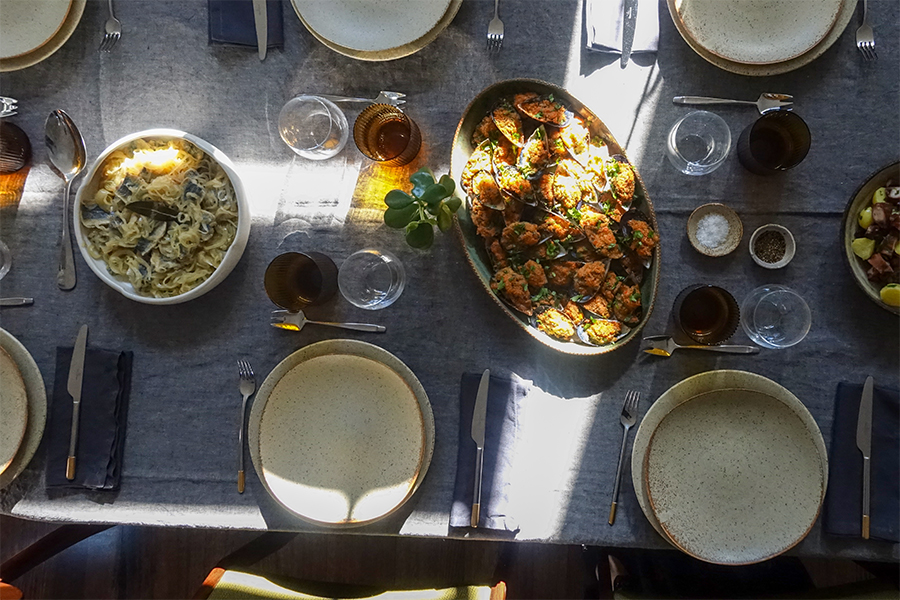 Nello turns 100 – a seafood family feast with sarde in savor

Last weekend we celebrated a milestone; my father’s centenary. He would have turned one hundred on 23 May 2021. Even though he left us in 2012, and his voice and his mannerisms grow fainter as the years pass, he is still with us in so many ways. In my home there are reminders of him all around, reflecting his love of art and painting, his homeland of Istria, food and wine and “la famiglia”, as for him there was nothing as important as family. He would have been so happy to see us all there, all his descendants (children, grand-children and great-grandchildren – including baby Nello – except my daughter Tamara, who is living in London) celebrating him with a lunch of his favourite foods. 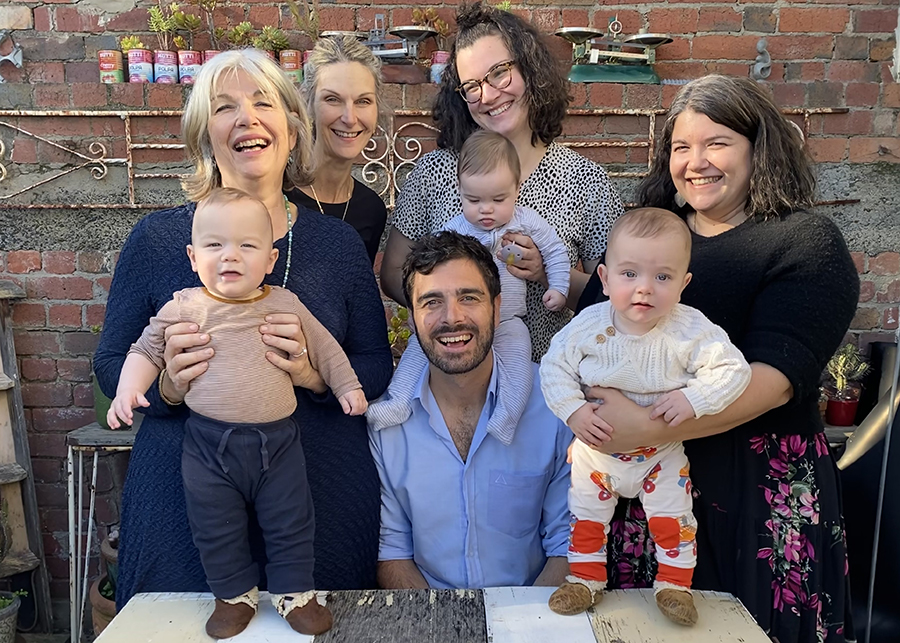 In the late 1960s through to the 1970s, my papà took up painting on canvas. He made himself an easel, a wooden palette for his paints, a box for his tubes of oil paints, brushes and palette knives and made a space for himself to paint in the garage. There the family would be shielded from the smells of oil paints and turpentine, and he could be at peace away from “le donne” (with two daughters, a wife, a female cat and dog; he felt we ganged up against him) with a pipe in one hand and a brush in the other. He loved painting landscapes, still lifes and even some abstract pieces. He was not that talented, but enthusiastic, mainly copying other paintings or photographs that he loved. I have several pieces: a few framed still lifes and one unframed piece that is, I believe, of the cliffs and beach at Davey’s Bay near Frankston (beachside suburb near Melbourne where the family used to go for picnics in the 1950s and 60s).

One of my most prized possessions is his portrait, painted in Athens in February 1943 by  Eva Segala. According to a letter written to his cousin on 15 April 1943: “you should see (my portrait) which is in oil paint and painted from life. To satisfy your curiosity I will tell you that the painter is tall, blonde, “simpatica” and we get along very well”. I am not sure what happened to the painter, who was his girlfriend when my father spent over a year in Athens as a soldier in the Italian army. He was captured by the Germans in late 1943 and put into a prisoner of war camp in Bulgaria. He carried the portrait all over Europe, to Australia in 1950, back to Italy when we migrated there in the 1970s and then back to Australia, to its final resting place in our family home. My mother was not remotely jealous (after all, he had married her, not Eva), though my father loved to believe she was. 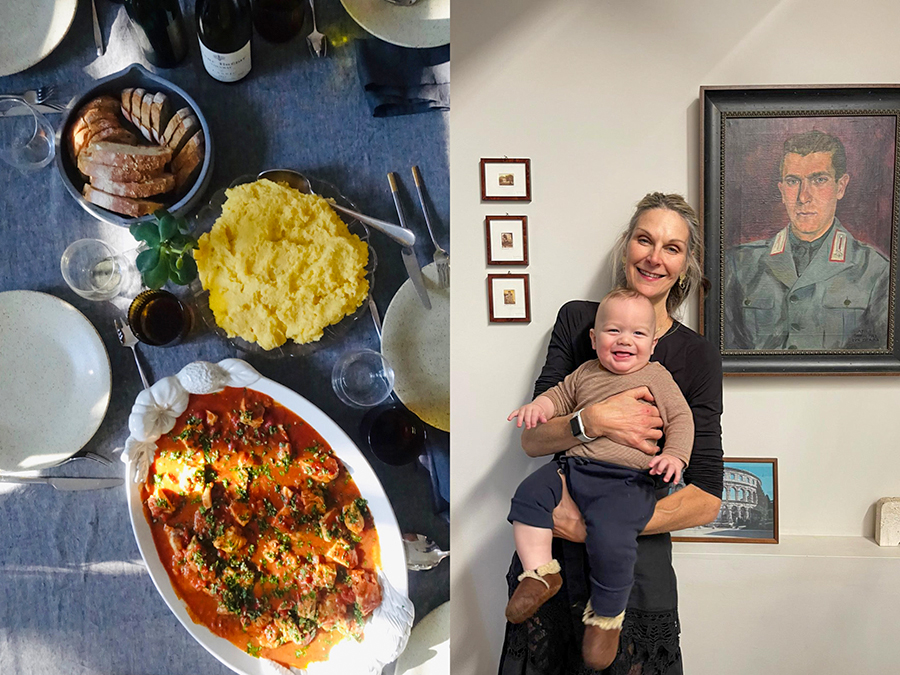 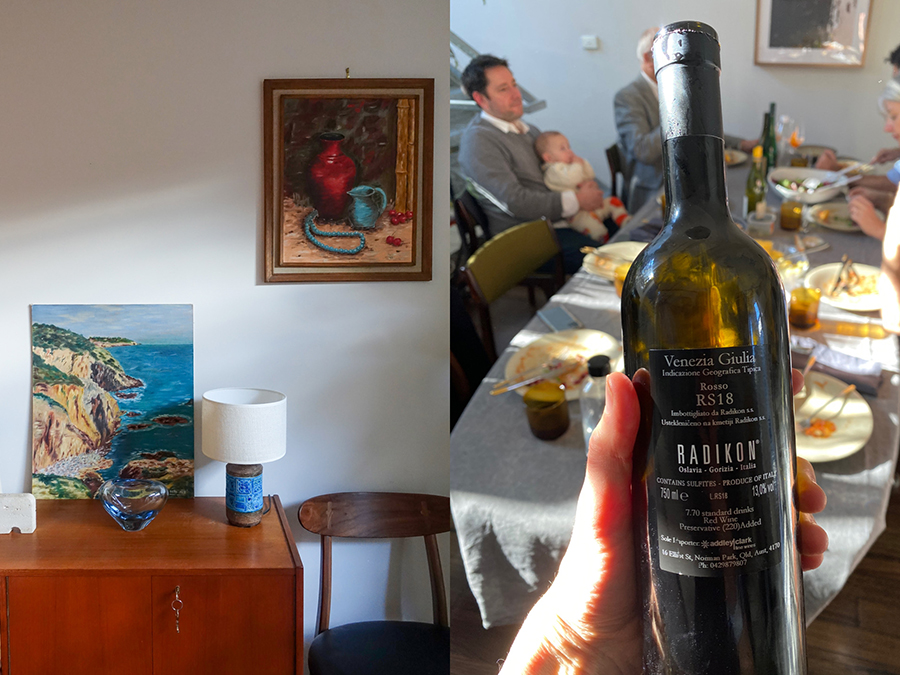 I have his collection of books, letters and mementoes from Istria. He was a subscriber to “L’Arena di Pola” and my uncle Mario, who had married my mother’s sister Clara, sent him newspaper cuttings and magazines. He kept up a correspondence with some of those he had been in the army with during WW2; names I remember are Scarpelli, Germanis and Contigliozzi (as they always referred to each other by surname). There are books that list the wartime bombings in the town of his birth, Pola; others that describe with poignancy the places and memories they left in Istria; and others with a more political bent of that post-war period. There are framed photos of places that were important to him, in particular Pola and its Roman arena (which you can see peeking out from behind me as I stand holding baby Nello in front of my father’s portrait in the photo above).

Papà grew fruit and vegetables from when he first arrived in Australia in 1950. He was proud of his produce and would love nothing better than to exclaim, at the dinner table, that what we were eating was growing an hour before. He also loved to eat, especially food that reminded him of home, though its preparation was a woman’s job. That said, once he retired, he took more interest in making food. In addition to the “usual” tasks for men of that generation (gutting the fish, tending to the barbecue), he liked to help my mother in the kitchen. Helping is a bit of a stretch as it consisted of occasionally peeling apples for the strudel, or cutting the crostoli into ribbons, but more commonly, reading out a recipe to my mother as she did all the prep. The influence of my father in the kitchen is best seen through dishes that my mamma Livia would make, as her cooking morphed during her marriage from that of her native Veneto to become more Istrian, where garlic was king and seafood was eaten several times a week. The photo below is of my parents in the back garden in their final home in Vermont South. 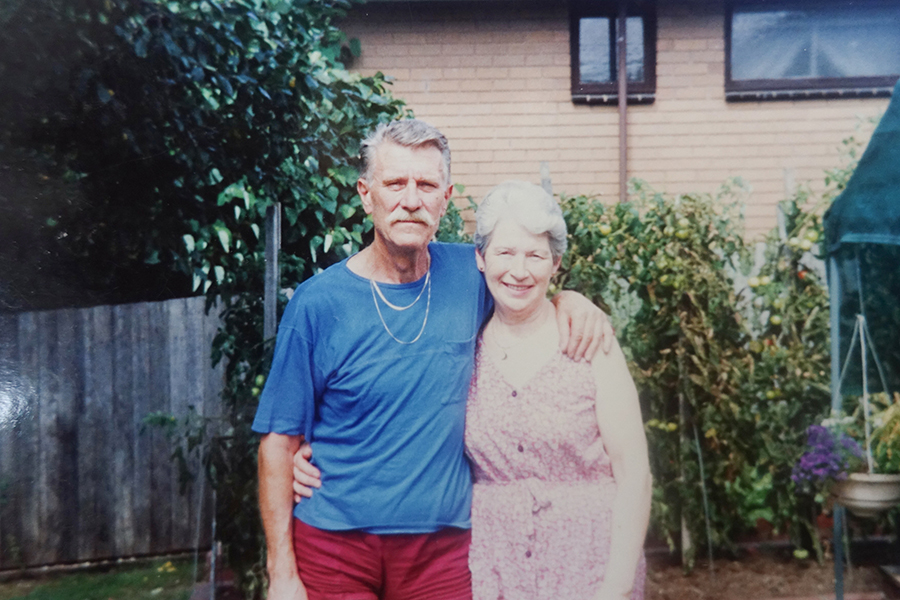 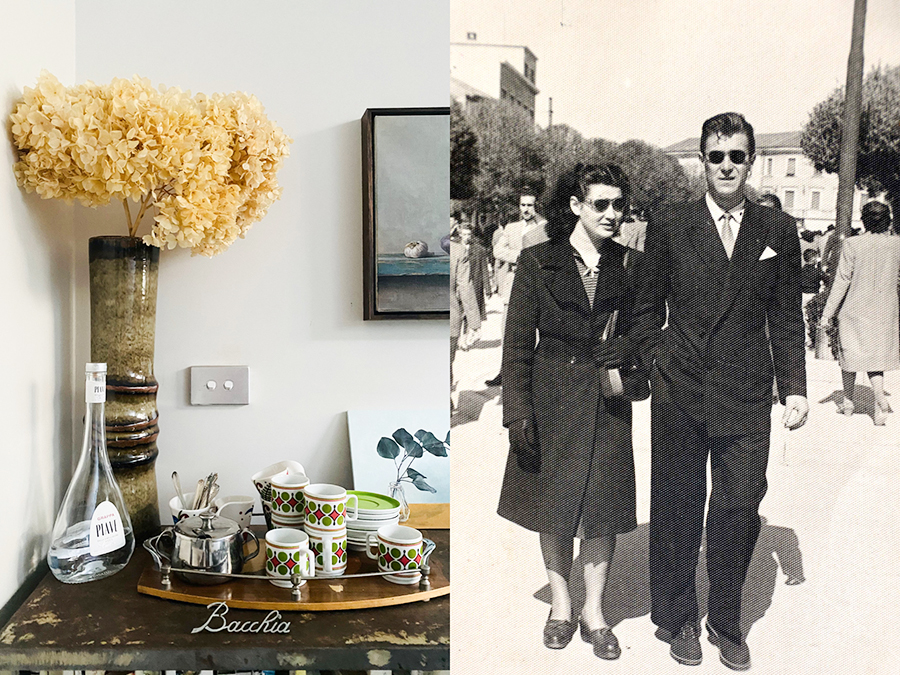 The menu for our feast on 23 May 2021 was a collaboration between me, my sister and my niece Claire: spinach polpettine appetiser; seafood antipasto of octopus and potato salad, “sarde in savor” (sardines in a sweet and sour sauce, see image at the start of the post, the dish on the left) and Mario’s baked mussels; seafood “brodetto” (stew) with polenta and a large salad; Torta Cornelia (a 3-layer hazelnut and chocolate cake that is my aunt Clara’s recipe). The feast was accompanied by wines from Venezia-Giulia and Australia (my father was partial to good wine) and a splash of grappa with our coffee (as he often did). We watched the video of his 70th birthday, where some 50 people, mainly istriani, gathered to celebrate, looked at old photos and read a translation of a series of letters he wrote from 1941 to 1947. It was a wonderful wonderful day. We miss you, your intellect, your love of Istria and family and miss hearing you exclaim “Dio Faust!” and “scramenzka barca!”. Buon compleanno caro papà xx 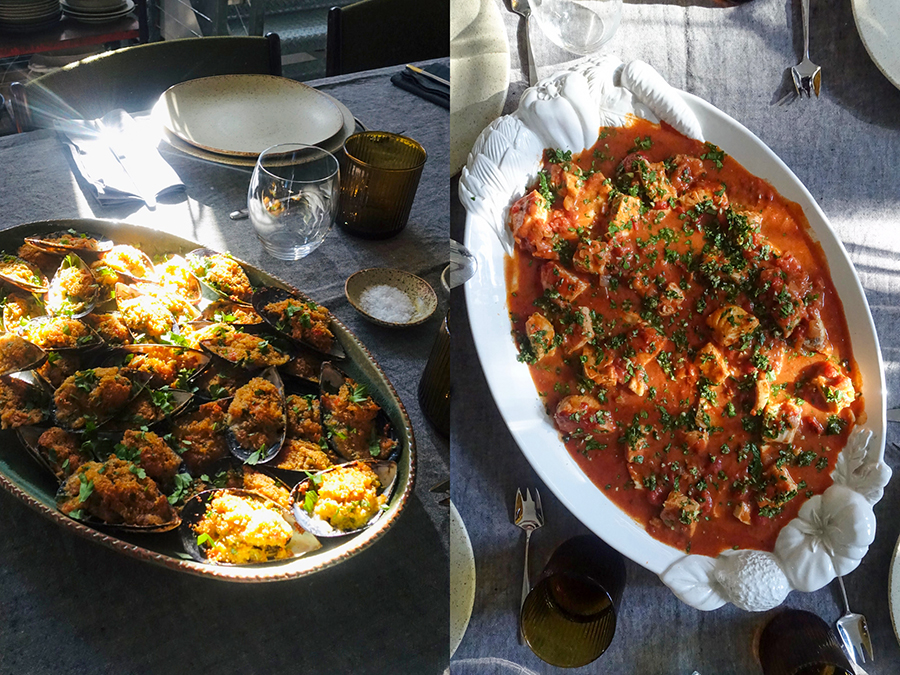 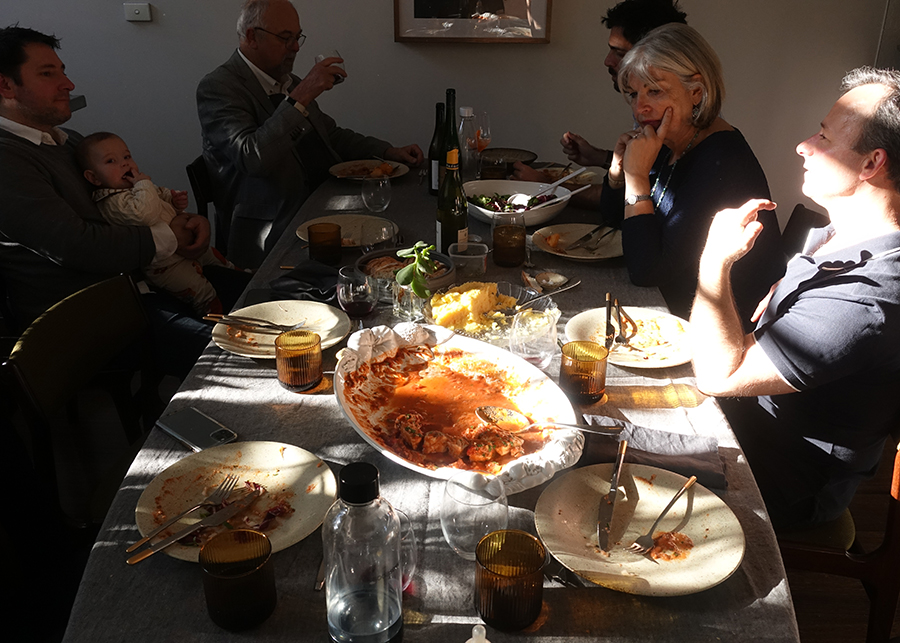 Some of the recipes for the feast we had last weekend will be in my new cookbook, Istria, to be released on 1 October 2021 (click HERE to pre-order in the US from Rizzoli and HERE for a list of retailers in Australia). Here is the recipe for the sardines, which were a favourite of my father’s. I made these on Wednesday and we ate them on Sunday. They were sweet with onions and sour with vinegar, a delicious balance of flavours. You can find a version in Venice called “Sarde in saor”; we called them wither “sarde in savor” or “sardele in savor”. This recipe is from my second cookbook “Adriatico”. Feel free to double the recipe like I always do. 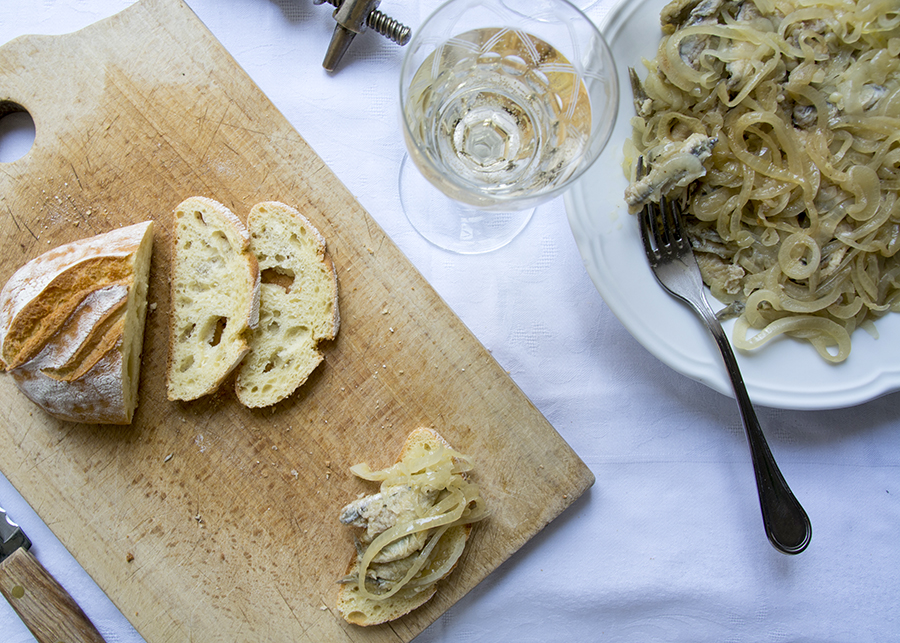 serves 6 – 8 people as an appetiser with bread

Heat half the olive oil in a large non-stick frying pan and add the onions and bay leaf. Cook on medium to low heat, making sure you check them frequently, stirring and adding a bit of water if they are browning. The onions should be soft and lightly golden. Add the vinegar after about 20 minutes and cook for another ten minutes, making sure the onions remain quite moist while they are cooking (add a bit of water if needed) and make sure there is some liquid left in the pan. Set the onions aside.

Dust the sardines with flour on both sides. Heat the rest of olive oil in the same frypan and cook the sardines on medium heat for about a minute on each side (don’t over cook them) until pale golden. Place on absorbent paper to soak the excess oil and scatter with some sea salt.

In a ceramic container, preferably with its own lid, place a layer of cooked onions and then a layer of sardines. Repeat the layers three or four times until you have used up all the onions and sardines, the top layer should be onions. You should have enough liquid left over from cooking so that the bowl of sardines is quite moist.

Place in the fridge covered for at least a day (up to 5) before serving.