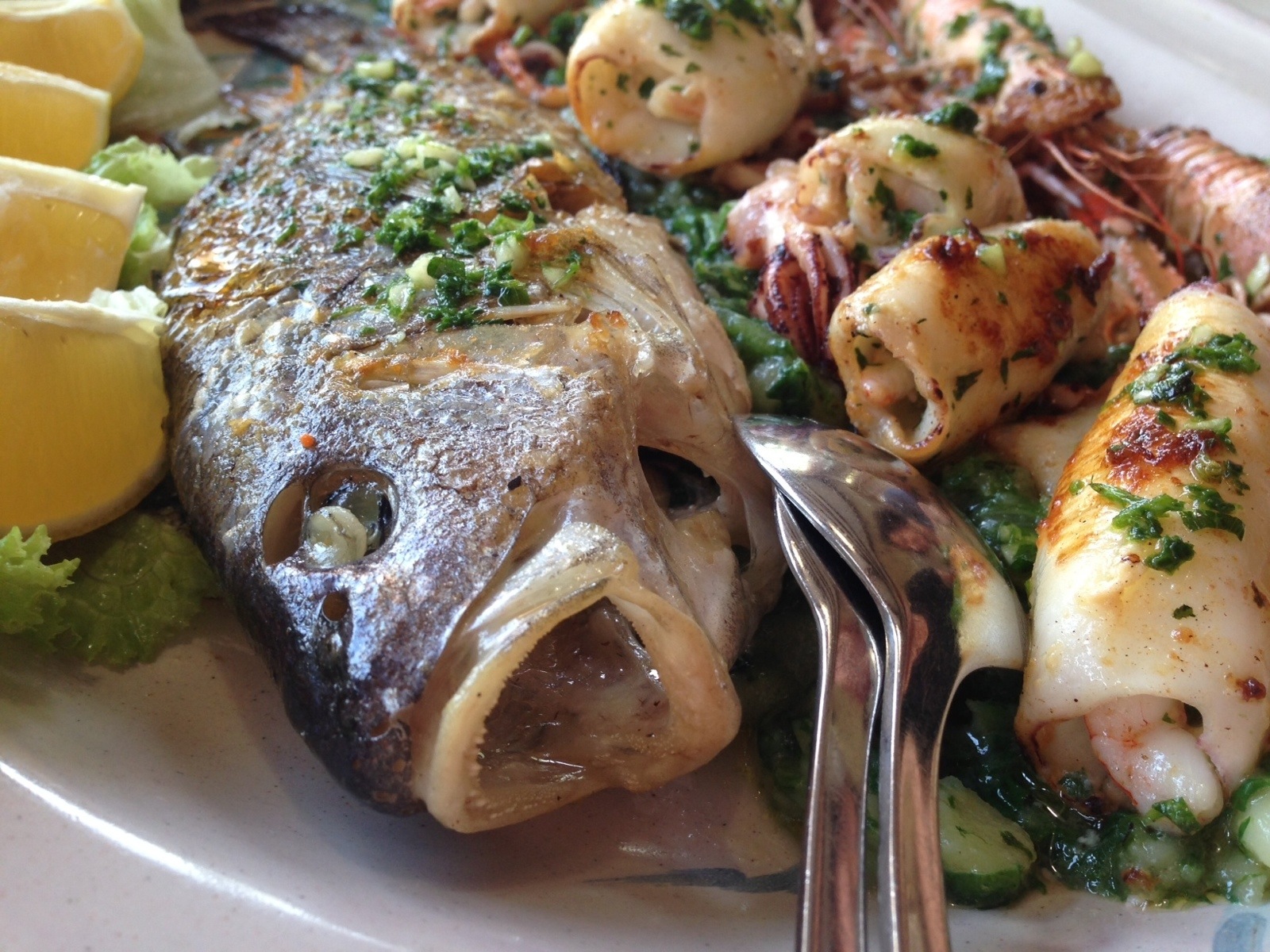 My dear friend Ksenia and I met when we were 15 and I was living in Italy. We spent a summer in Pola in Croatia together. Her grandfather knew my father many years ago before he moved to Australia. I have only seen her a few times since then but it is like we have always known each other. On our recent trip to Pola, she and her husband took us out to a late lunch (that essentially turned into dinner) as the restaurant Miramare, run by the very talented chef Mira (hence Miramare as the restaurant is by the sea – mare in Italian). 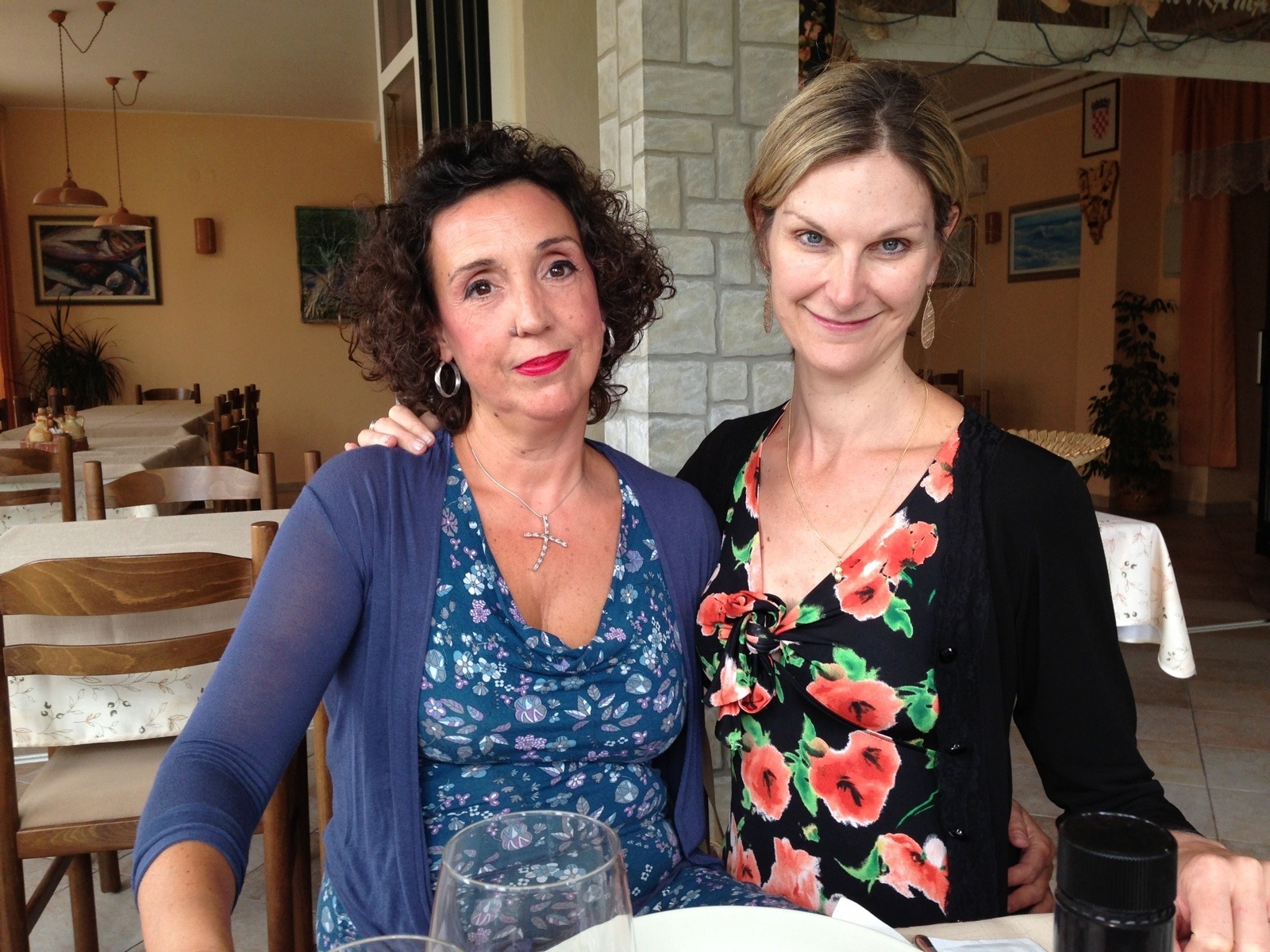 Ksenia knows Mira well and had warned her that I would be taking food photos. They spoke in Croatian together to introduce me and I heard the words Australia and Masterchef. Mira had an idea that I was a bit of a foodie and there was lots of laughter during the introductions. I have had a lot of incredible seafood meals in my time but this, I can happily say, surpassed them all. The secret was the freshness and quality of the seafood and the passion with which Mira makes her food. We were the only people in the restaurant – the feast was just for the four of us, which made it extra special. We started off with their home made olive grappa as an appetizer. 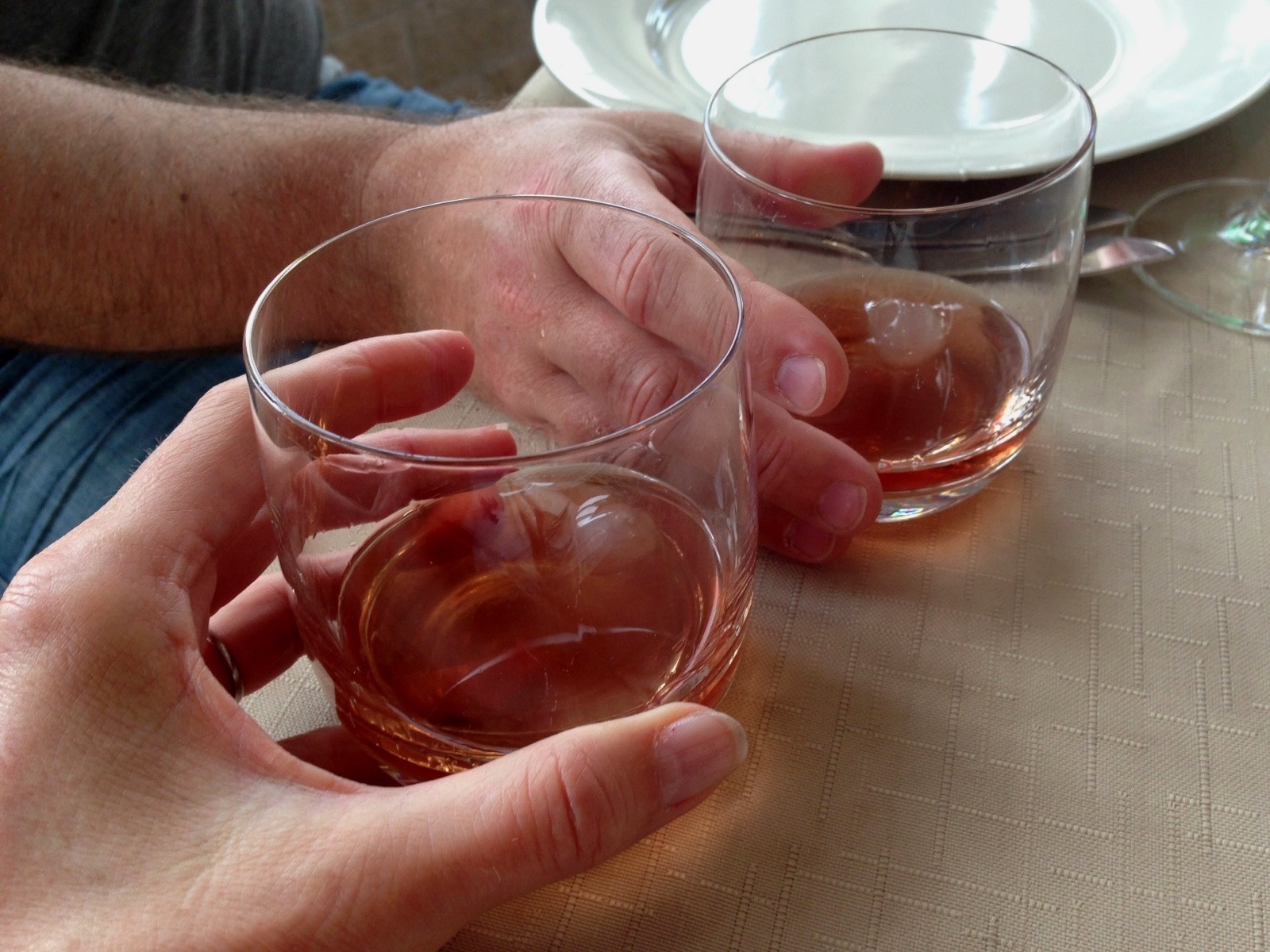 The grappa was a cloudy brown but had a slight sweetness mixed with the taste of olives. You could smell it without putting it anywhere near your nose. It was served with a cube of ice and the perfect way to start this seafood feast. There was no menu – food just kept appearing. We started off with a cold appetizer of baby calamari, tiny sweet scampi, dondoli (local type of mussel) and squid on a bed of rucola de primo taio (baby rocket, the first time it has been cut) and local green baby radicchio, also its first cutting. The first cutting of both varieties is always the most tender and the sweetest. This was topped with finely chopped garlic and parsley, salt, black pepper, lemon juice and some Istrian olive oil. This was washed down with half litre jugs of chilled white wine that kept appearing (the house blend of local grapes – Chardonnay, Moscato and Malvasia). 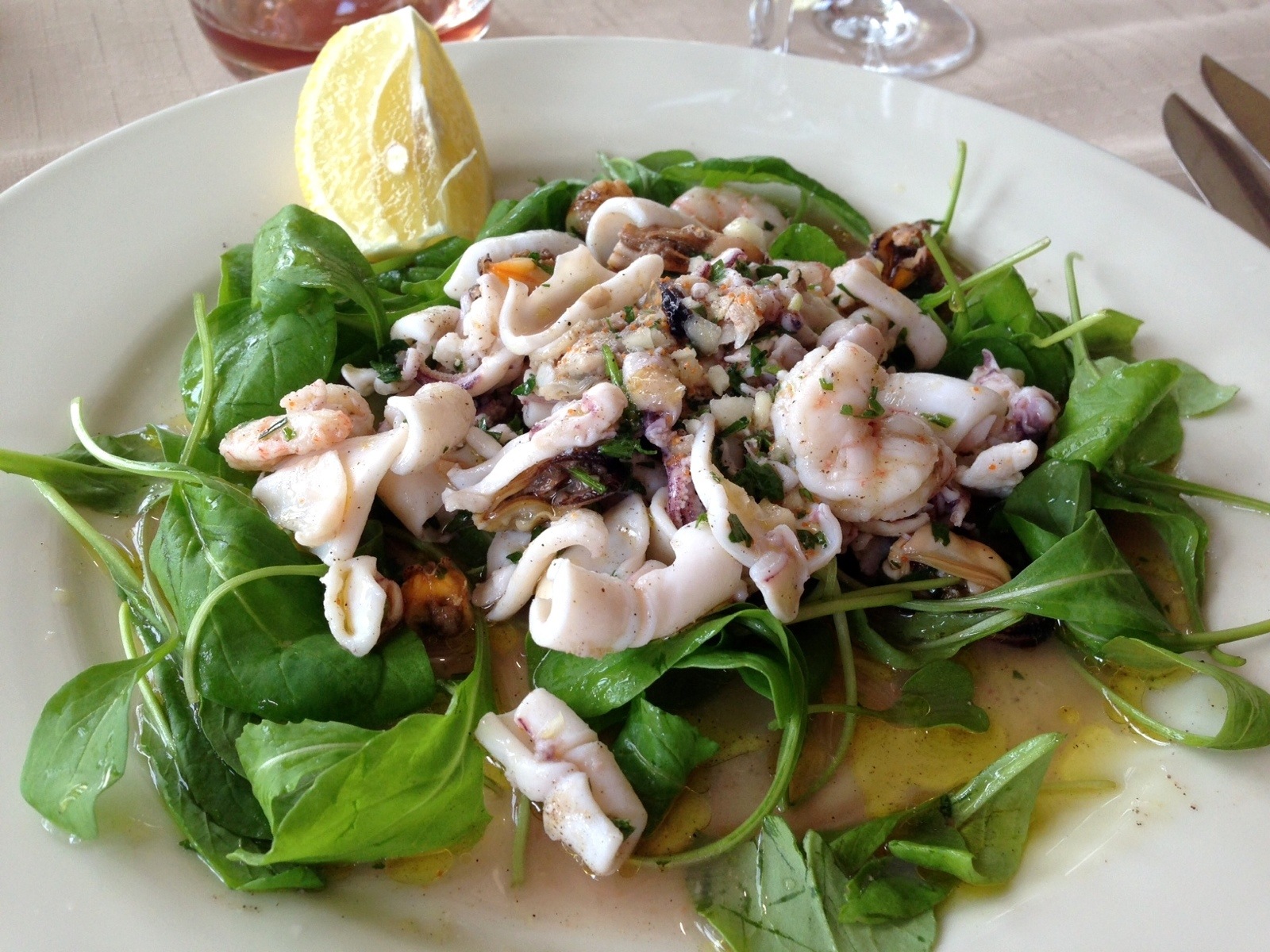 The next appetiser was also cold – a skewer with sweet scampi and lemons next to some fried zucchini flowers and a little tartare sauce. The mix of sweet and sour was delicious and very refreshing. 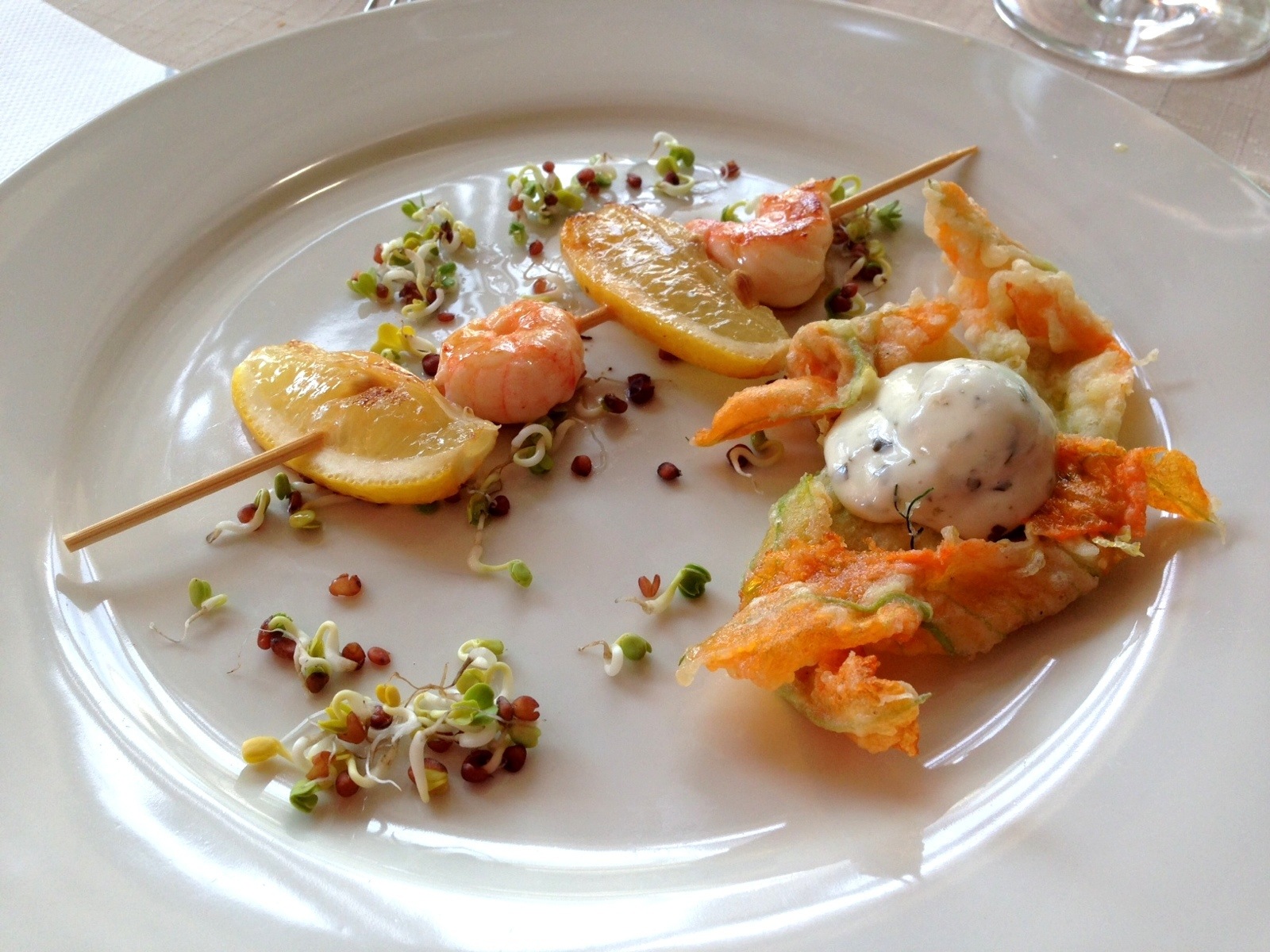 After a bit more wine and lots of chit-chat in a mixture of Italian and English, came a large platter with all sorts of shellfish cooked au gratin . 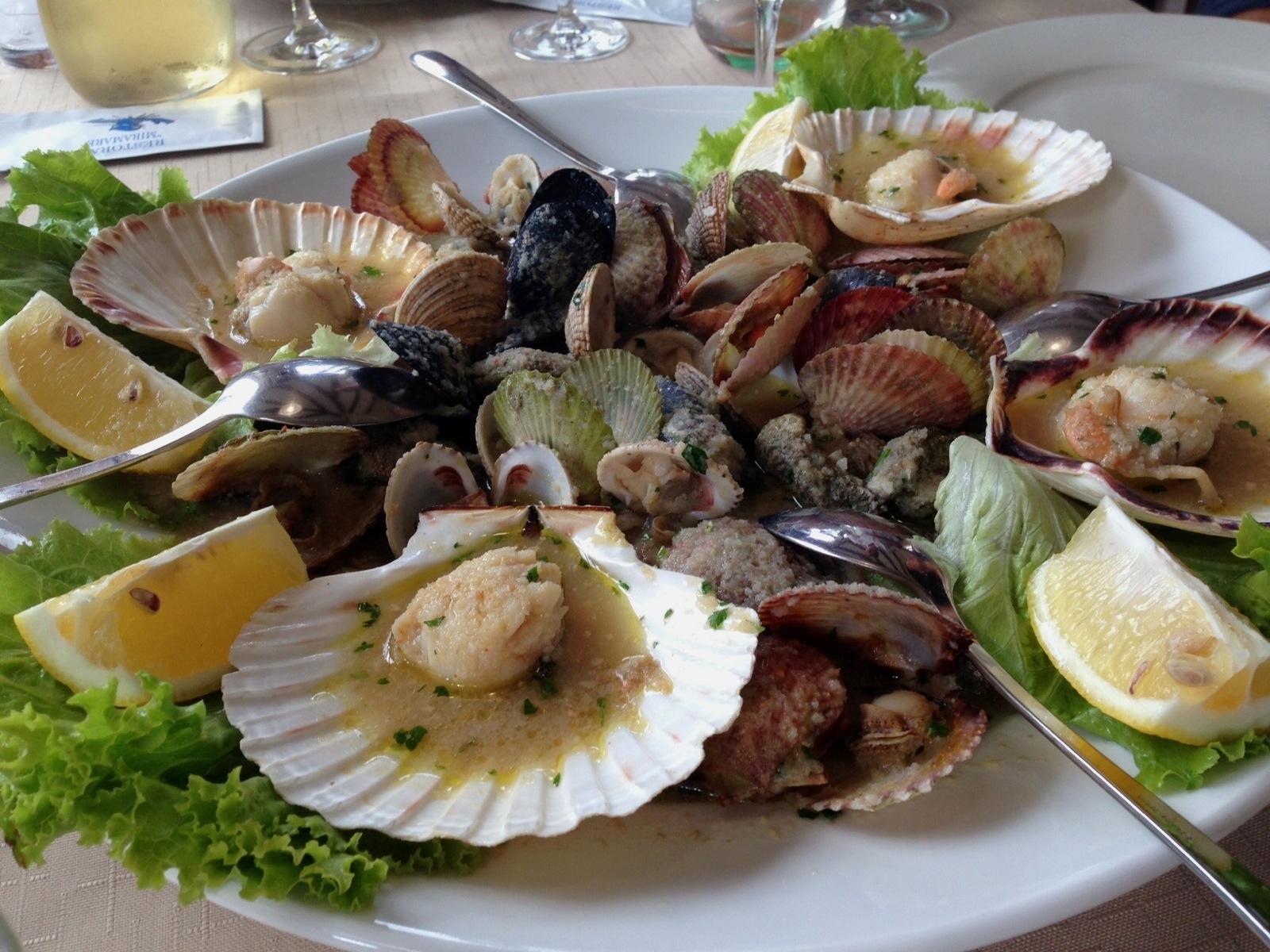 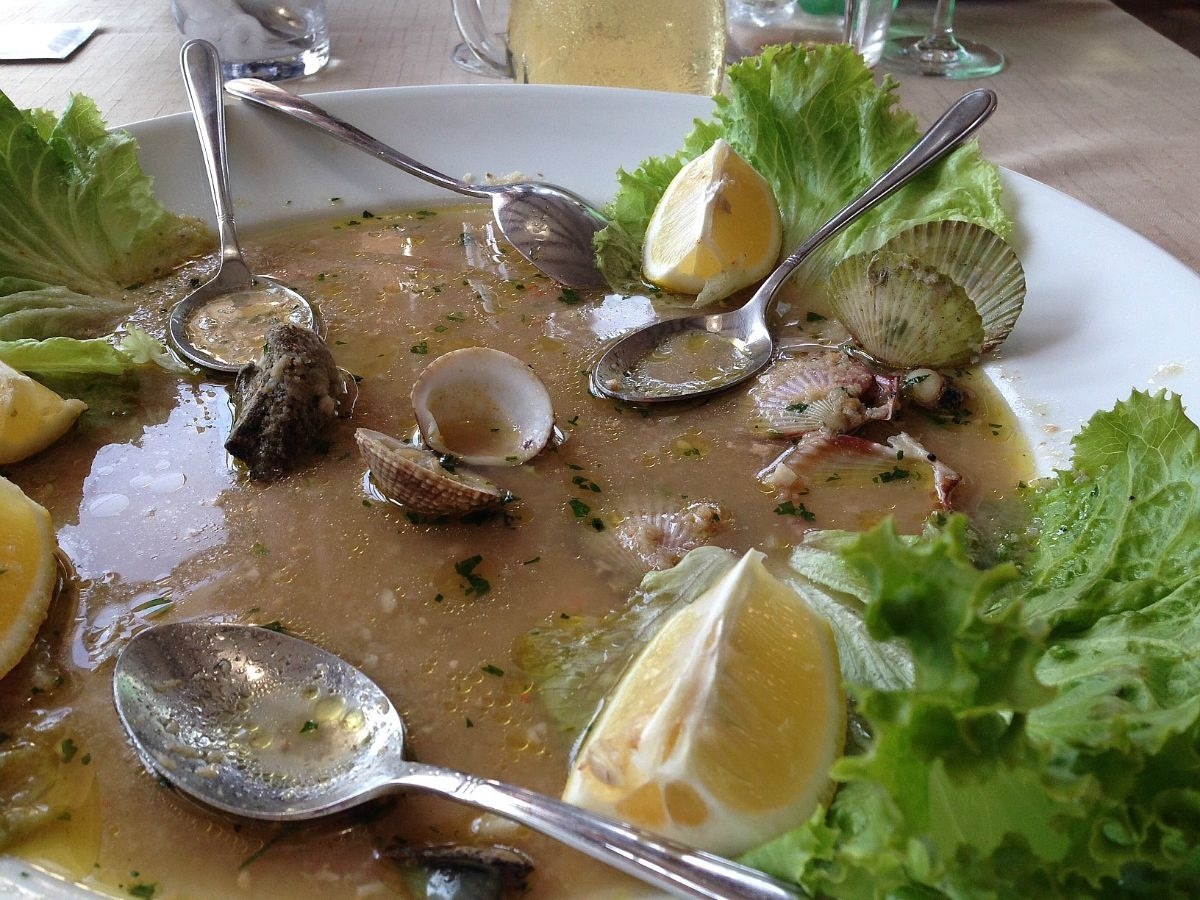 There were large scallops, baby scallops, clams, mussels and a rather curious one that is quite tricky to open and is found in the sea close to Split and Dubrovnik (image below). They were all sitting in a delicious garlic-laden broth. We used bread to mop it up as well as scooping it up with baby scallop shells. We didn’t leave much of it on the serving dish. 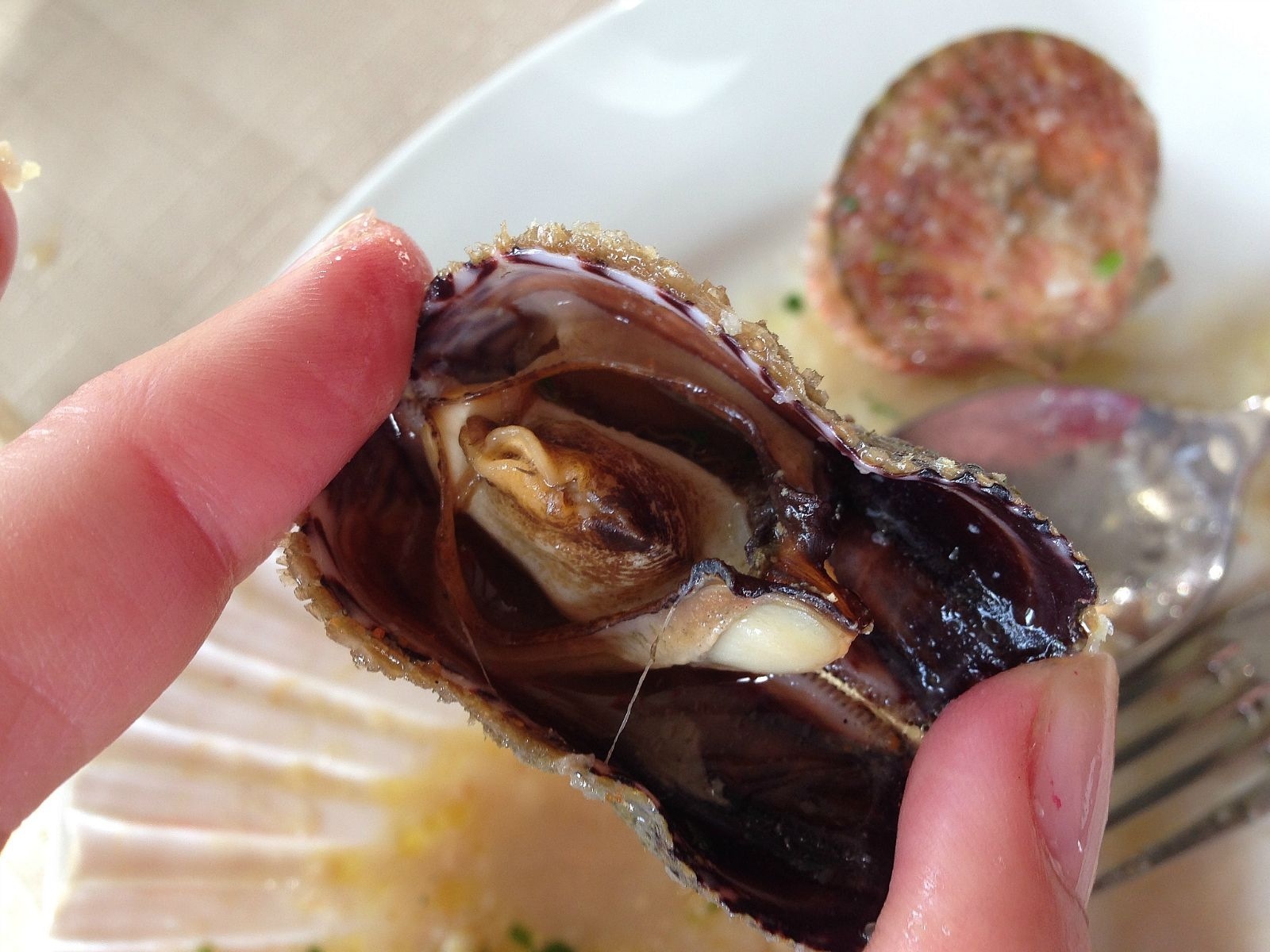 I was fully satisfied at this point and nearly fell off my chair when some 20 minutes later Mira came out holding a huge platter full of baked fish, all locally caught that she told me she bought at the market early this morning. There were calamari stuffed with tiny scampi, a whole red triglia (red mullet) and a brancino (European seabass) plus some giant scampi. She dished it all out into our plates herself. I loved it all but in particular the stuffed calamari – they were sweet and melted in your mouth – and the incredible scampi. They calamari were served on a bed of mashed potatoes with silver beet. 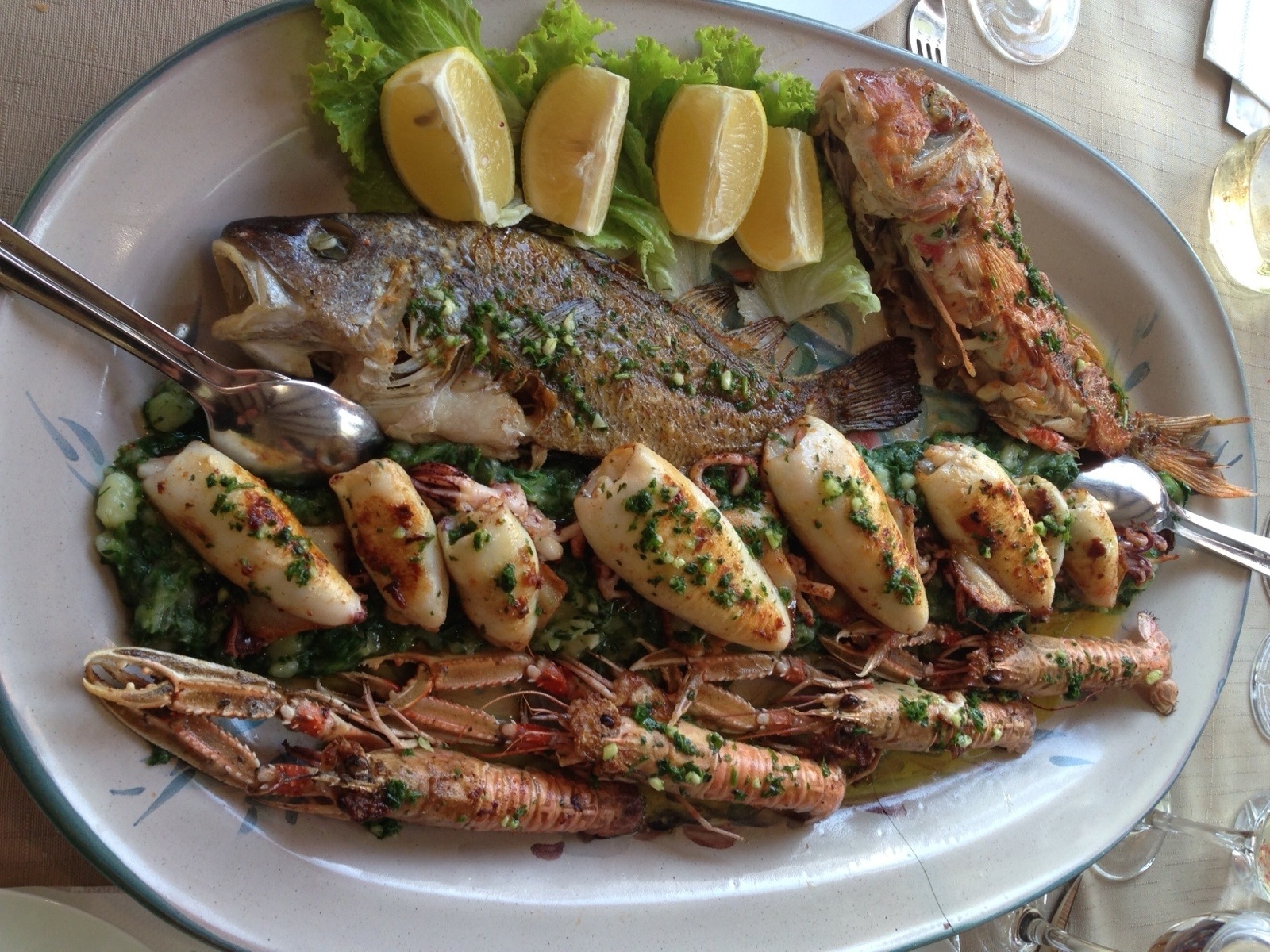 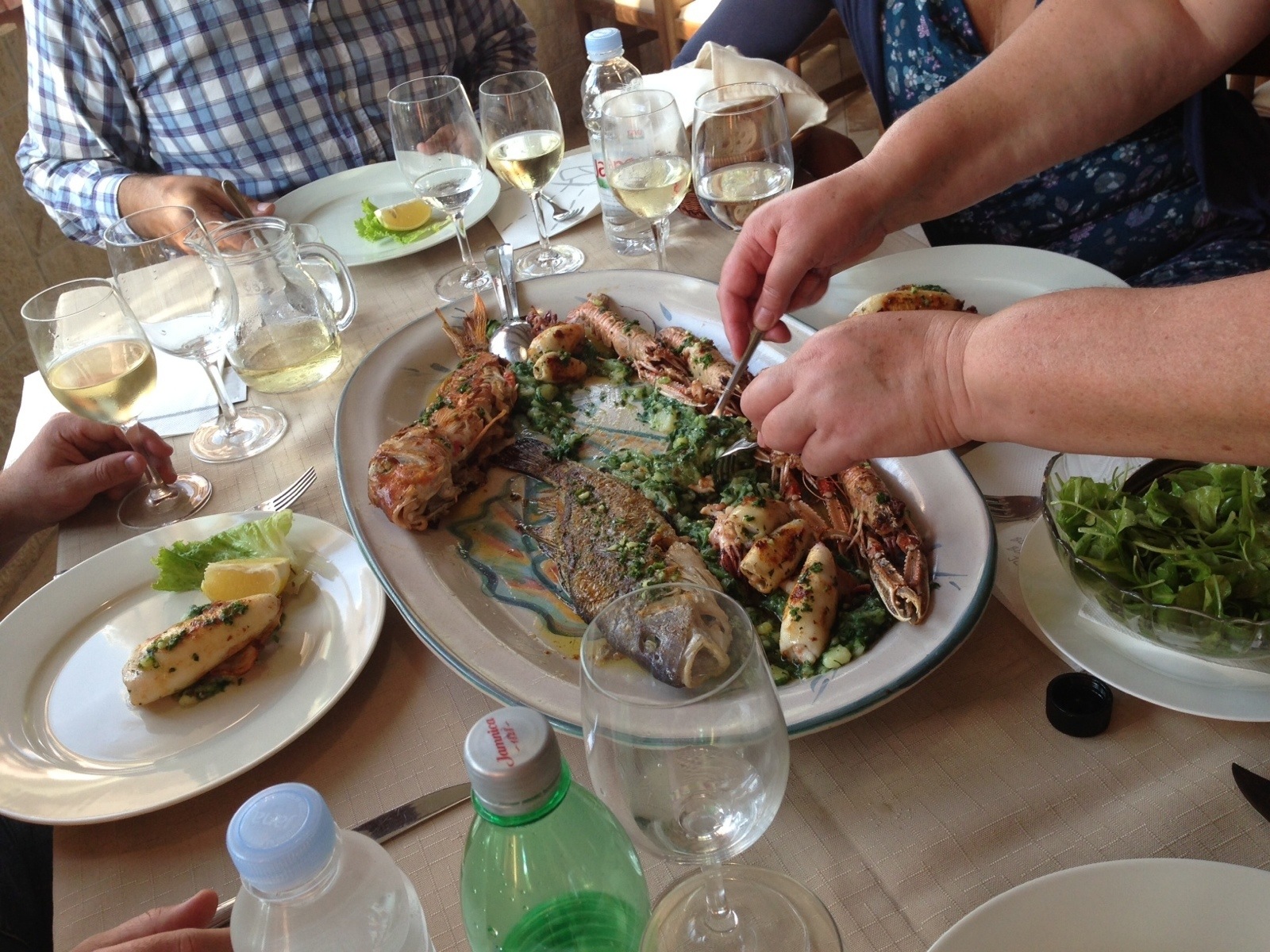 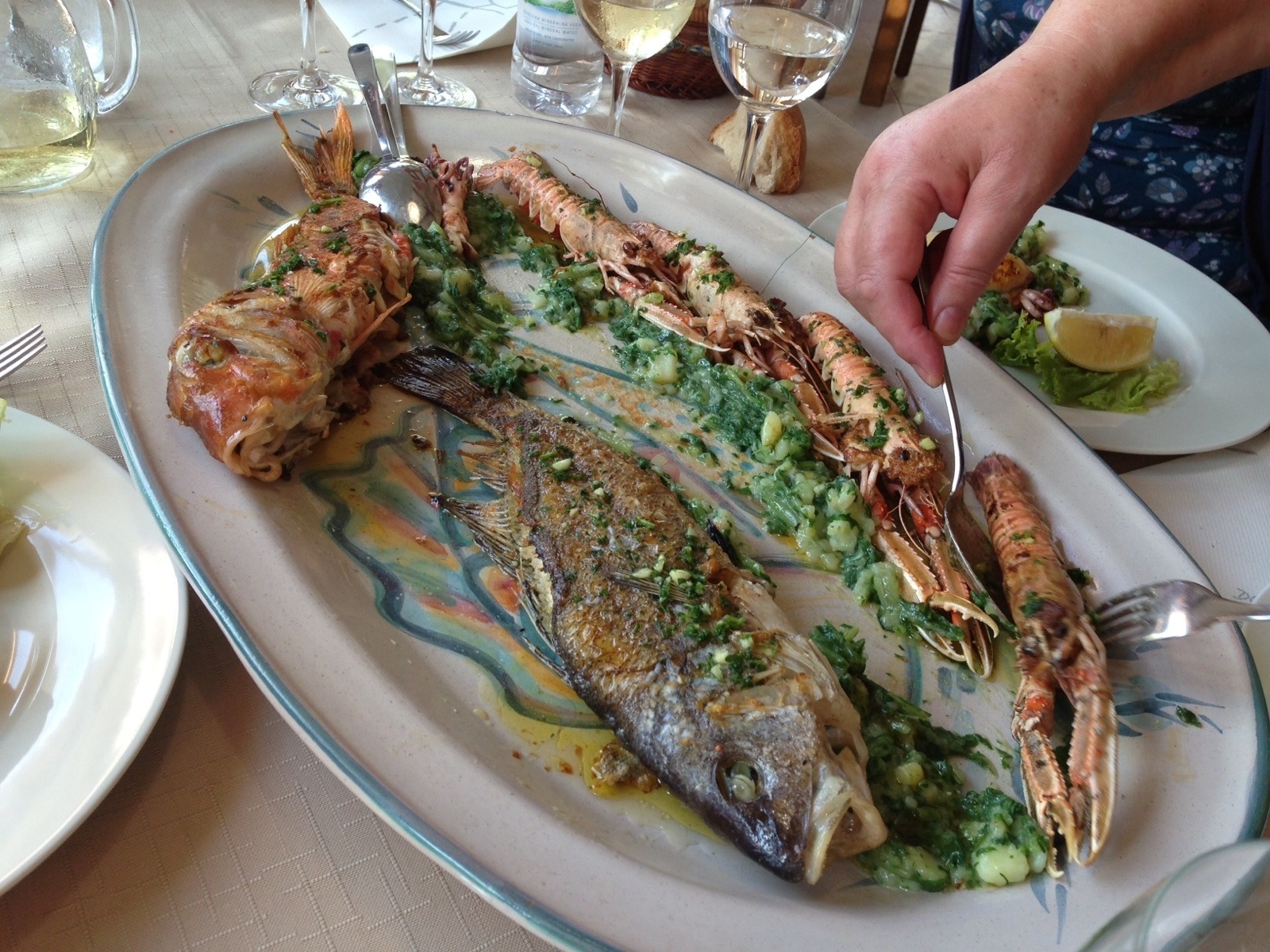 Mark was lucky enough to find some roe in his scampi – we all looked on enviously as he devoured this surprise find, which he declared to be amazing. 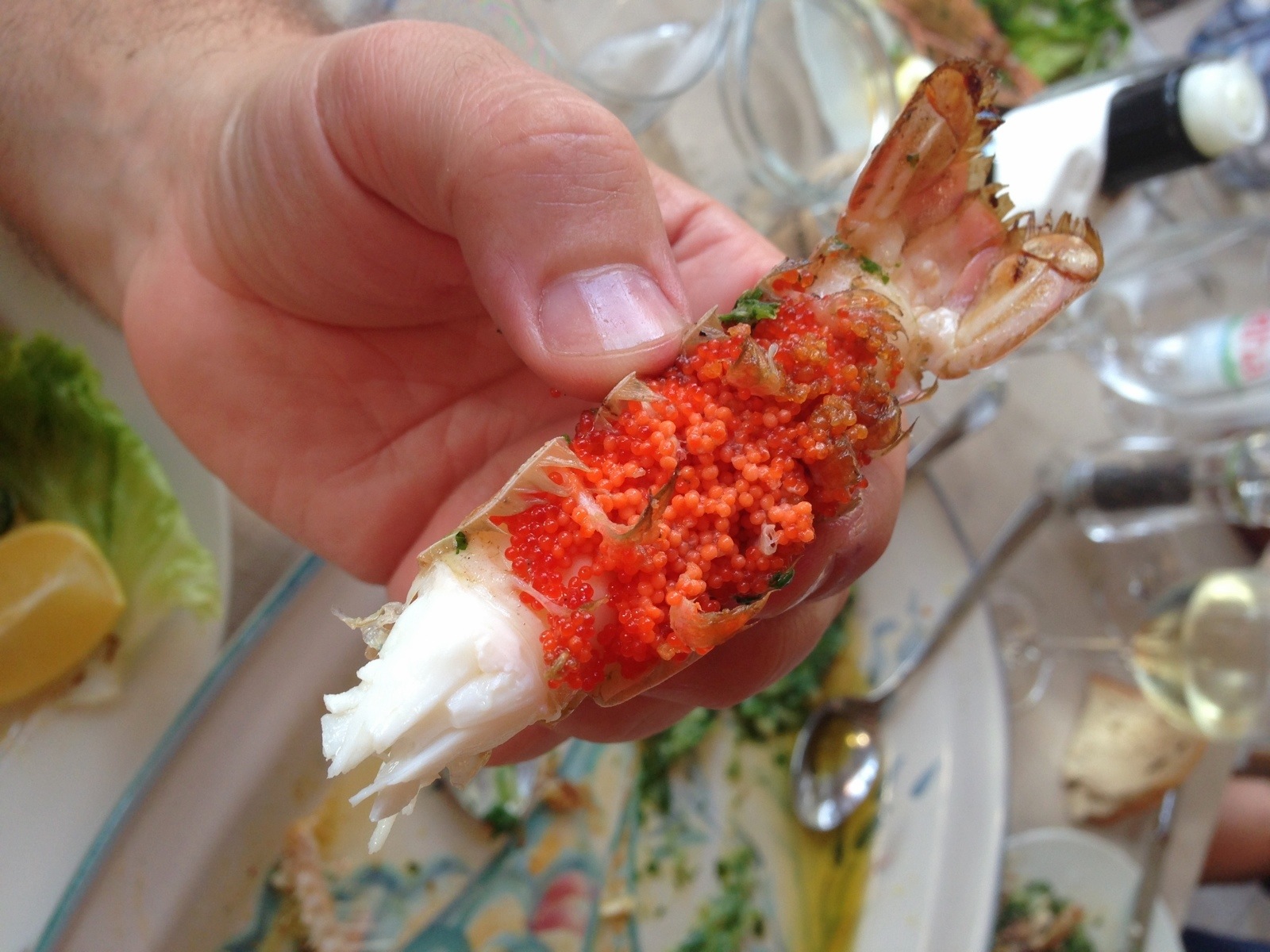 As a final and unexpected piece de resistance, Mira’s daughter appeared with goblets of sweet muscat and plates laden with flourless almond cake. Ksenia eats gluten free, so Mira had made this especially with her in mind. It was drenched in a sugar syrup which had a subtle flavour which she revealed as being bay leaves as well as some local Istrian honey. The cake was so moist and not too sweet, with the syrup balancing it out perfectly. 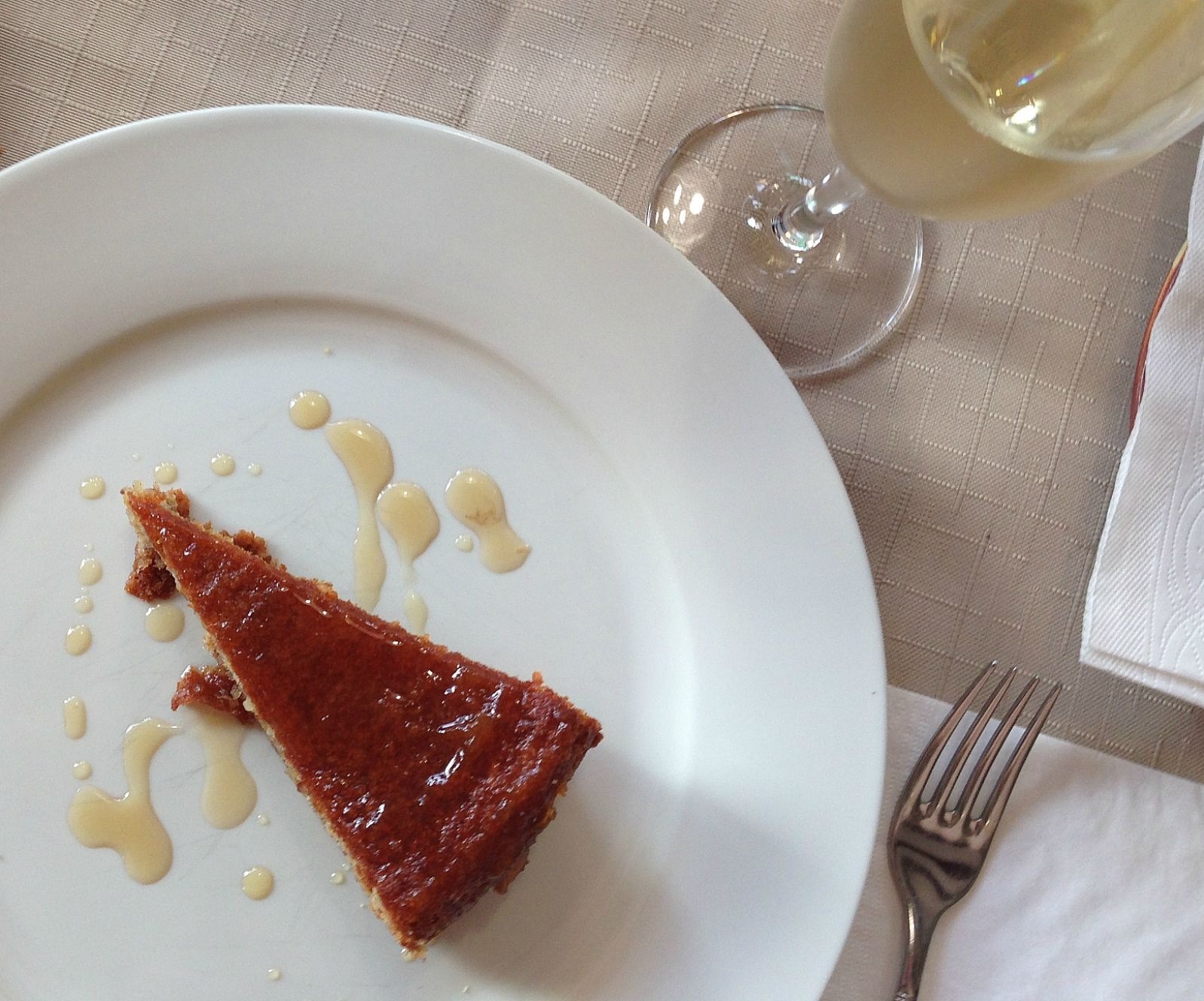 Our meal at Miramare was a highlight of our visit to Istria. Not only was it wonderful to spend time with wonderful friends, but the meal was astounding – as fresh as can be, delicious, all locally sourced and distinctively Istrian (not Croatian or necessarily Italian, but typical of the cuisine my father grew up with). The Croatian President visited Miramare in 2010 and a photo is displayed on the wall. If you are ever anywhere near Pola, contact Mira and see if she can cook you a meal at her rather amazing family run restaurant. 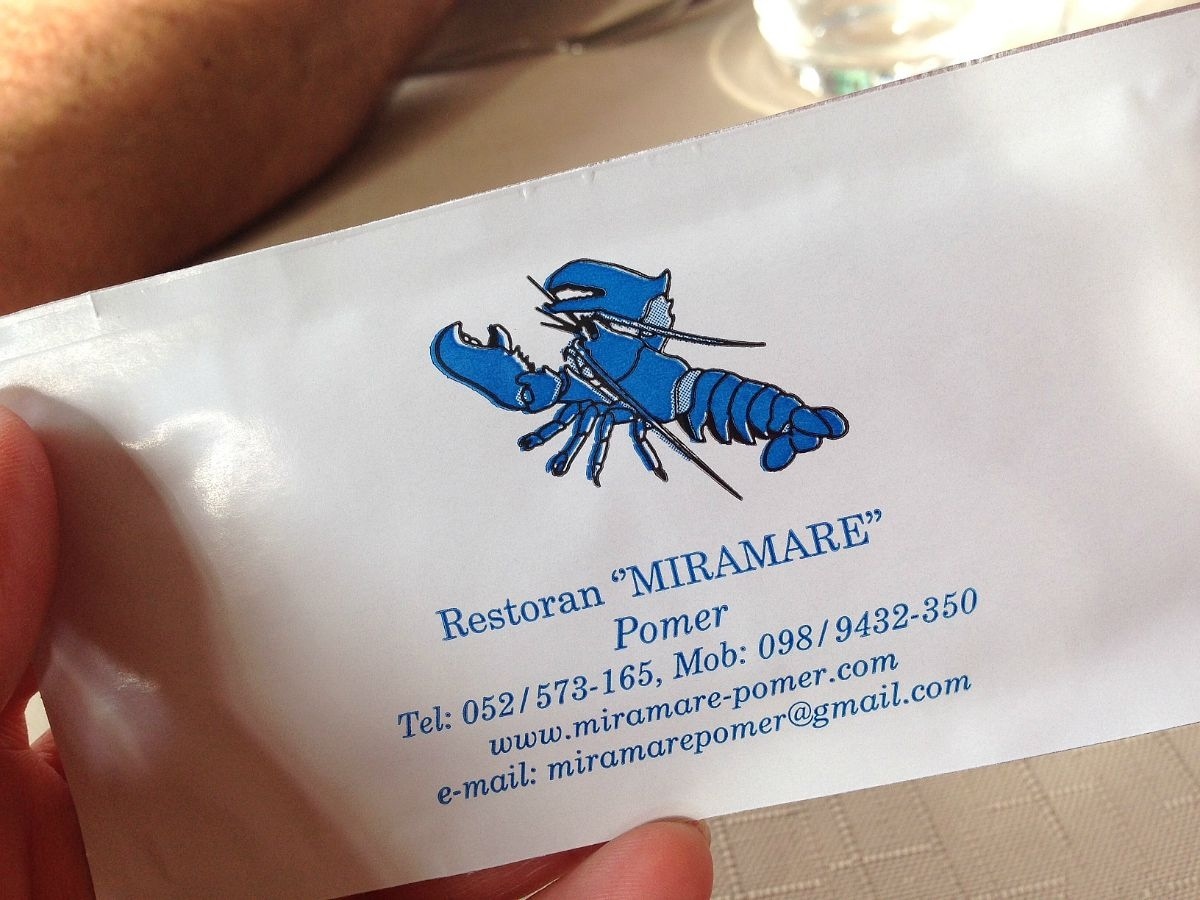 After the meal we went for a walk down to Promontore near the tip of the Istrian peninsula and got our feet wet in the inlet of those beautiful waters. What a magnificent day it had been. 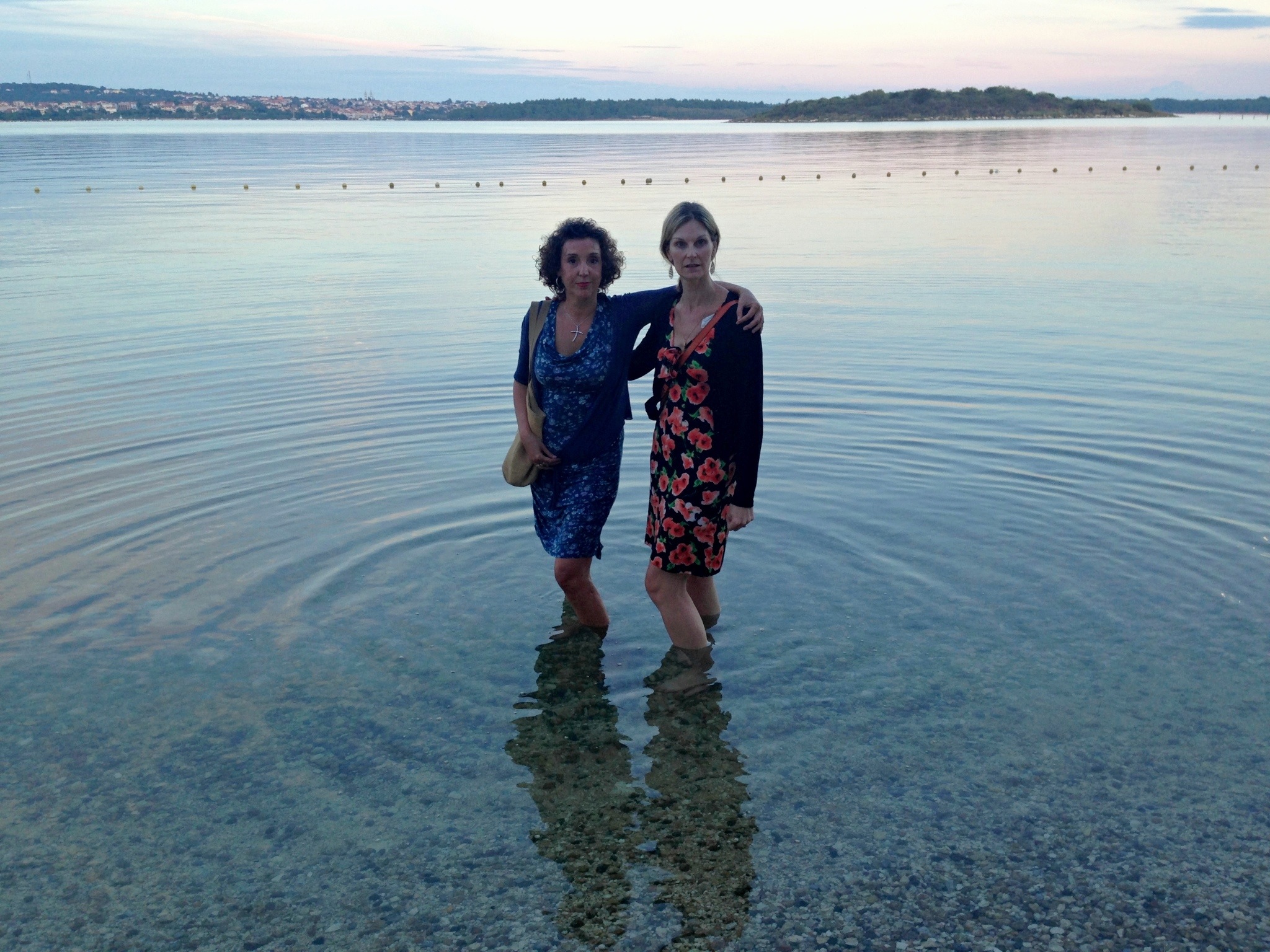