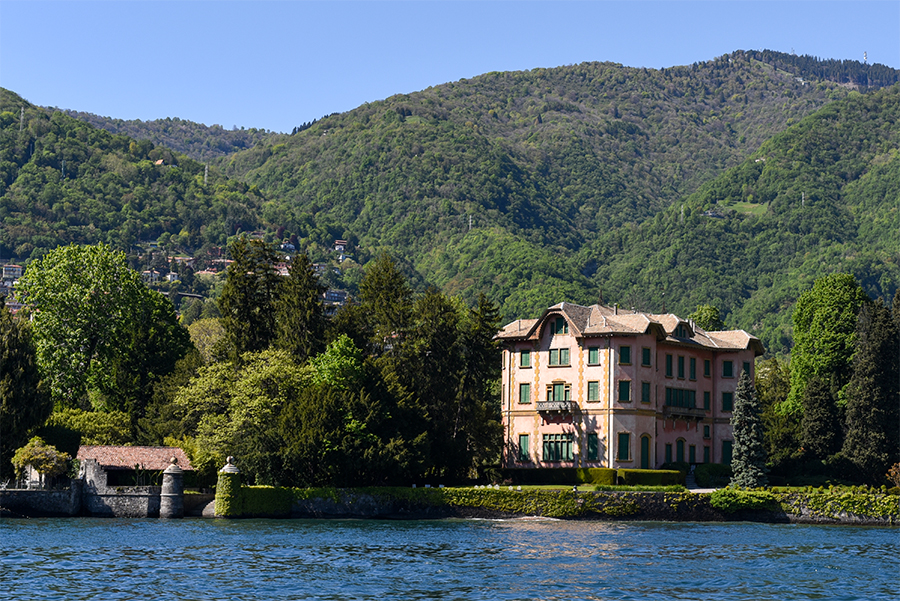 Planning a trip to Italy can be an absolute joy….that is, once you have decided which part of it to visit. There are twenty regions and one day I plan to visit them all properly; the missing ones are Sardegna, Molise, Calabria, Basilicata, Piemonte, Val D’Aosta and Trentino-Alto Adige. For this trip we decided to stay up North and explore the last three regions on the list, covering the Dolomites and the Lakes.  One of the key reasons for going there, apart from the history and the culture, was, as you might expect, the food. For me food speaks of the place, its people and what they value, so it seems like a natural way to travel.

I selected many of the towns I visited based on their restaurants, using either the Osteria d’Italia 2019 (by Slow Food) guide or via an internet search for “slow food restaurant + the name of the town”. So here are the five restaurants where I had lunch in five very pretty towns across four regions in the North and Northwest of Italy this Spring. Click below on the names of the towns to take you to the relevant section (or just scroll if you want to read all of them):

Aosta was a bit of a bucket-list town for me. It is tucked away in the Northwest near the French border, not a place you travel through but rather travel to. Torino is an ideal place to base yourself if you want to go for a day trip. About an hour into the 2-hour trip, snow-capped peaks start to appear on either side of the track and the train climbs through a slender valley to reach Aosta. The town has narrow streets, a medieval arched door through the old town walls and mountains at every turn. The region is well known for its cheese and wine and I had booked at Osteria da Nando. The family run osteria was established by Nando Scarpa and his wife Germana in 1957, and serves traditional Valdostana food. Much of the seasonal menu is made with local ingredients, sometimes from over the border into France but mostly from the Valle d’Aosta. 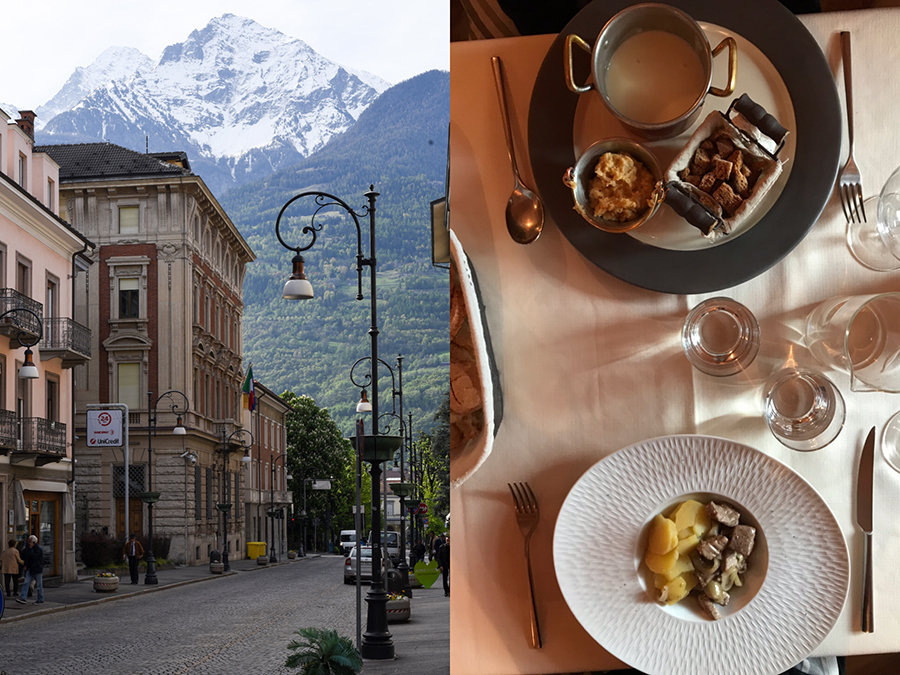 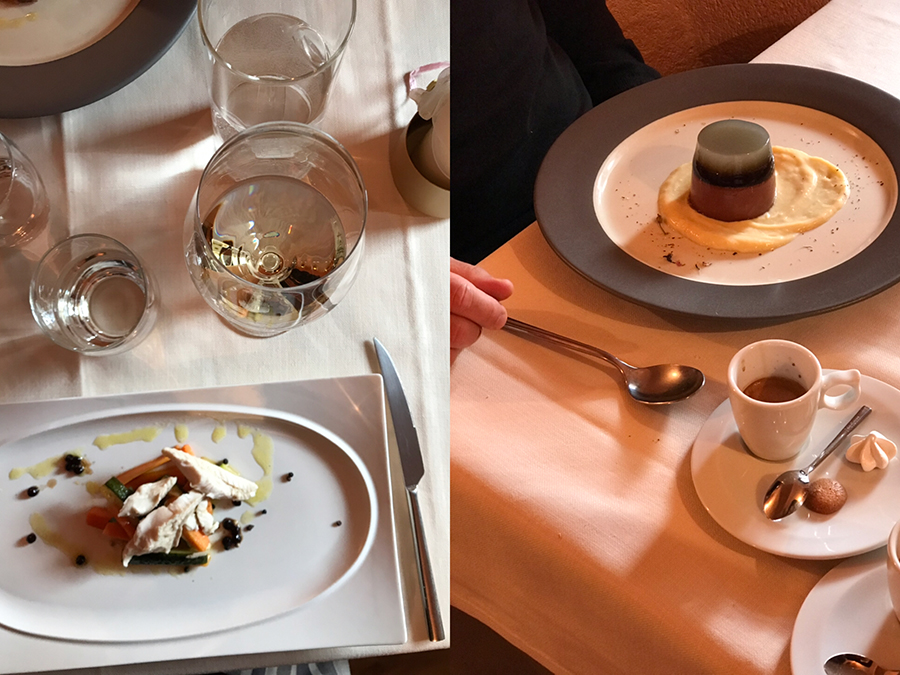 We ate especially well there; we splurged and picked the 5-course menu which is called the 1957. We ate grass fed beef carpaccio topped with mildly smoked Fontina cheese; nutty and occasionally chewy polenta alla Valdostana, made with local corn and Fontina cheese (the chewiness was from the polenta crust on the base of the pot); an oven-baked local fresh-water fish called Salmerino di Lillaz; and a fabulous wobbly dessert called Armonia, with layers of dark chocolate, coffee and the local liqueur Genepy. The wines were exceptional; I loved the Pantagruel Gewürztraminer as well as the local red Torrette.

At around lunch time on the drive between Torino and la Valletta Brianza we were driving past Novara, a town I knew by name because my nephew had worked there. He had said it was worth a day trip and a quick internet search revealed images of a castle, streets lined by arched walkways, a medieval square called il Broletto, and a “slow food” restaurant called “Antica Osteria ai Vini“. 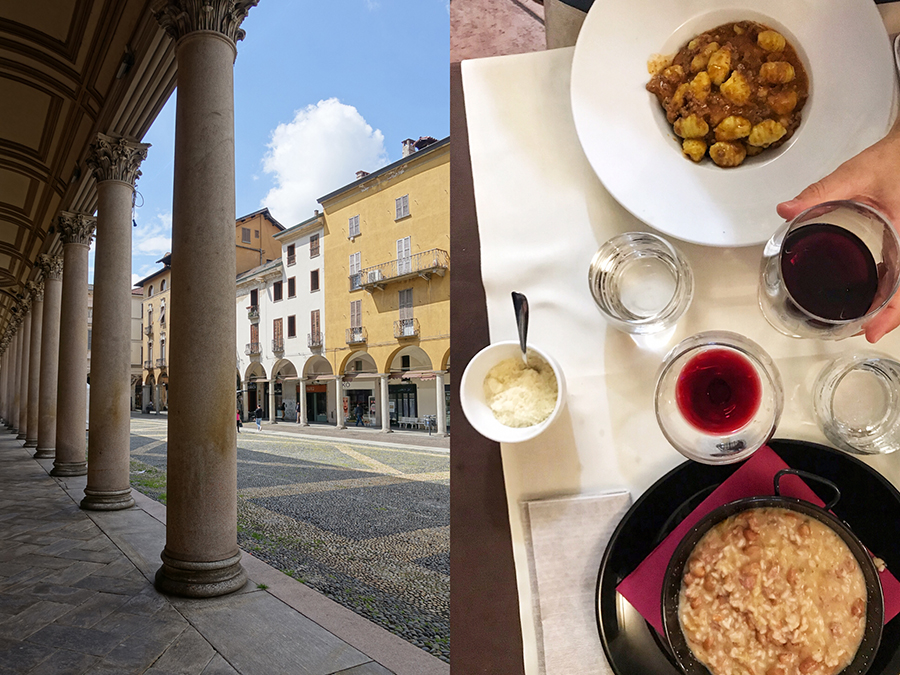 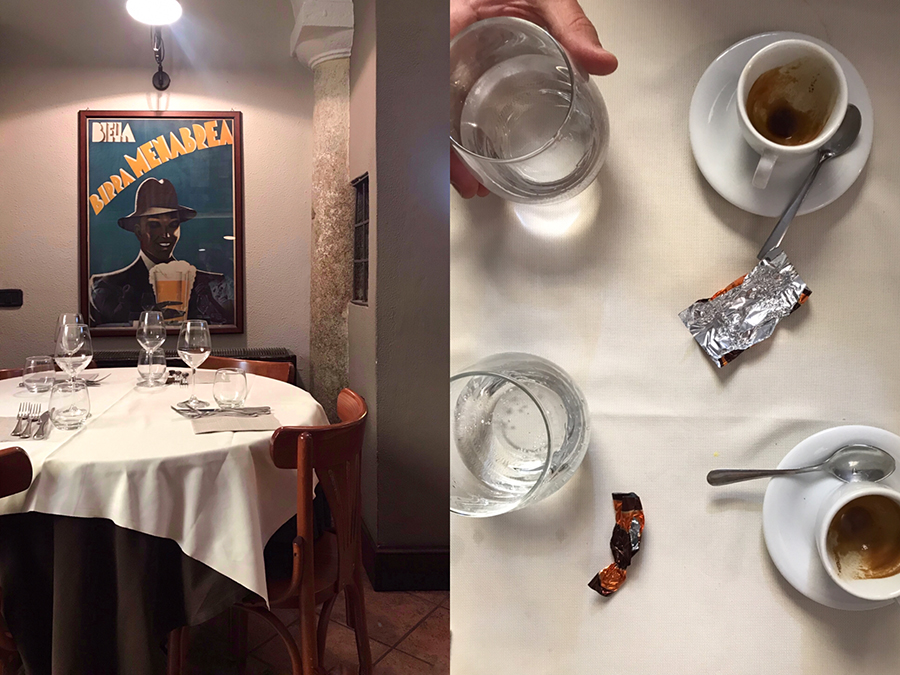 The title seemed promising, it was full of locals (another good sign) and the prices were very reasonable. We ate traditional dishes: carpaccio of fassone (lean raw beef from a local breed of cow) served with four different sauces (including a mayonnaise and a salsa verde), as an entree and I had the paniscia, a typical dish of Novara made with rice, beans and finely chopped vegetables with a thick soupy consistency, as a main. Mark ate some very good potato gnocchi with a generous amount of meaty ragú. As the weather had turned unseasonably cold, the paniscia was the hearty meal I needed.

The town of Como, right on the lake of the same name, is at the bottom of a busy road that snakes down the hill. It is a busy tourist town and great as a starting point for boat-trips along the beautiful lake. We had booked at a restaurant called Crotto del Sergente, on the outskirts, literally half way up the hill on the road out of town. Don’t be put off by the private-looking road; the two-story terracotta pink restaurant is set into the hillside and not obviously sign posted. It is has a large outdoor leafy terrace with tables just made for warm summer nights. 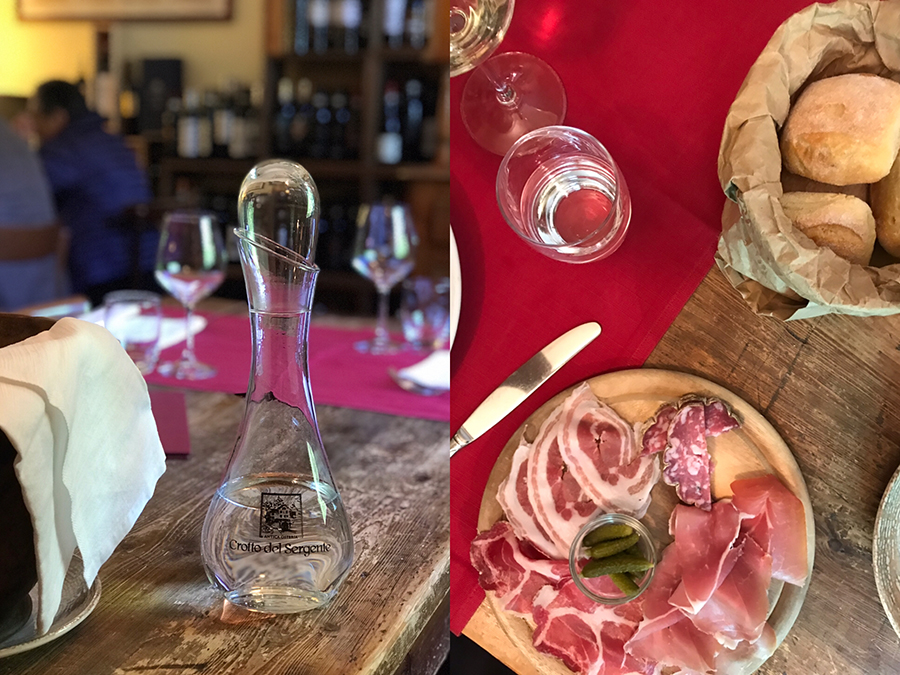 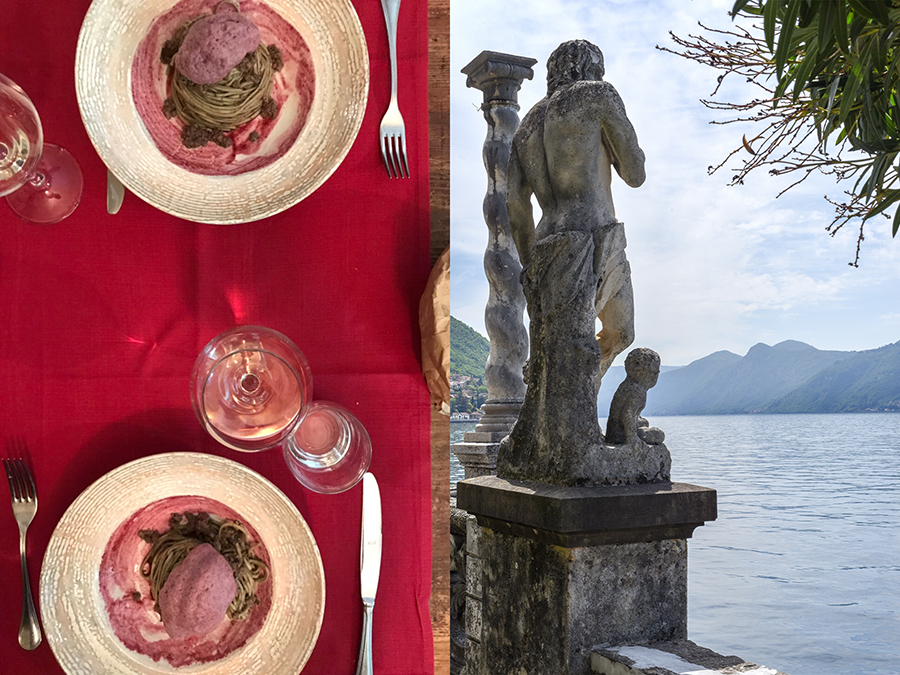 We had the “menu slow cooking “, a set menu of five courses. We started off with a tagliere of thinly sliced local salumi (the fatty pancetta was especially good with the pickled baby cucumber); followed by tagliolini made with Gran Arso flour served with wild boar ragú and a large quenelle of blueberry foam, which was balanced in flavour but slightly dry (maybe a bit more of the ragú would have done the trick). Next followed slow-cooked pork, with a horseradish and apple foam, accompanied by pan-cooked spinach and coffee grounds which worked surprisingly well. Lastly a very good raspberry sorbet. Though I am not a fan of foams and fancy foods in general, I loved this restaurant. It felt like old-school Italy, and had a great wine list.

My sister had raved to me about Bergamo, in particular the historic Città Alta. It is reached via a very steep walking path/road or else via a funicular. The roads in the old town are ZTL – zona traffico limitato – so don’t be tempted to drive. It was raining heavily the day we went and the queue for the funicular was horribly long. So walked up the cobble-stone path, steep but not too difficult in flat shoes, through the arched doorway to Bergamo Alta. The view from the top looking out onto the new town was stunning. We kept walking up the hill, past churches, palazzi and crowds of people with umbrellas to reach the beautiful Duomo. 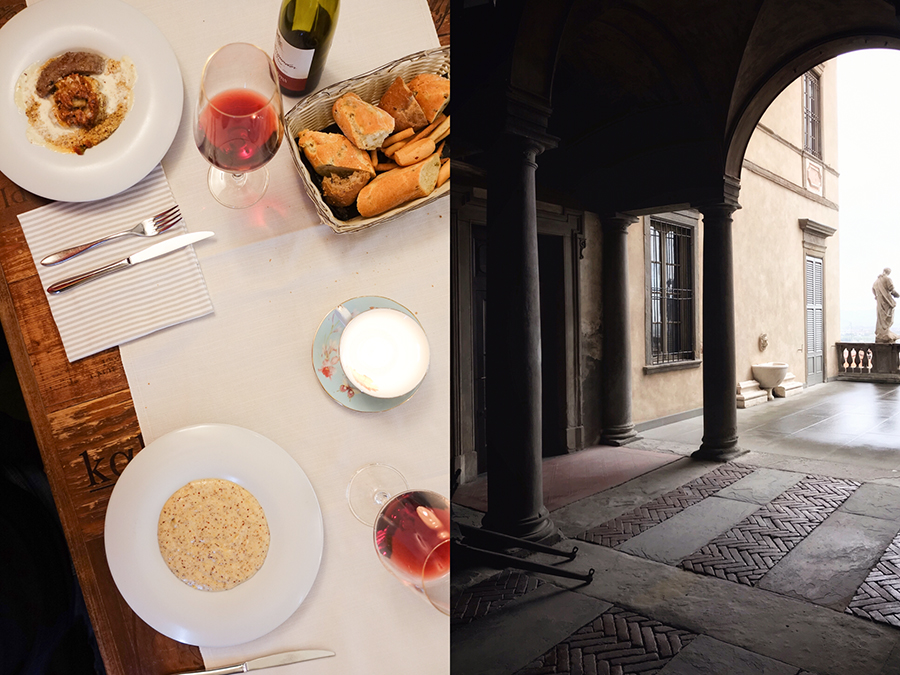 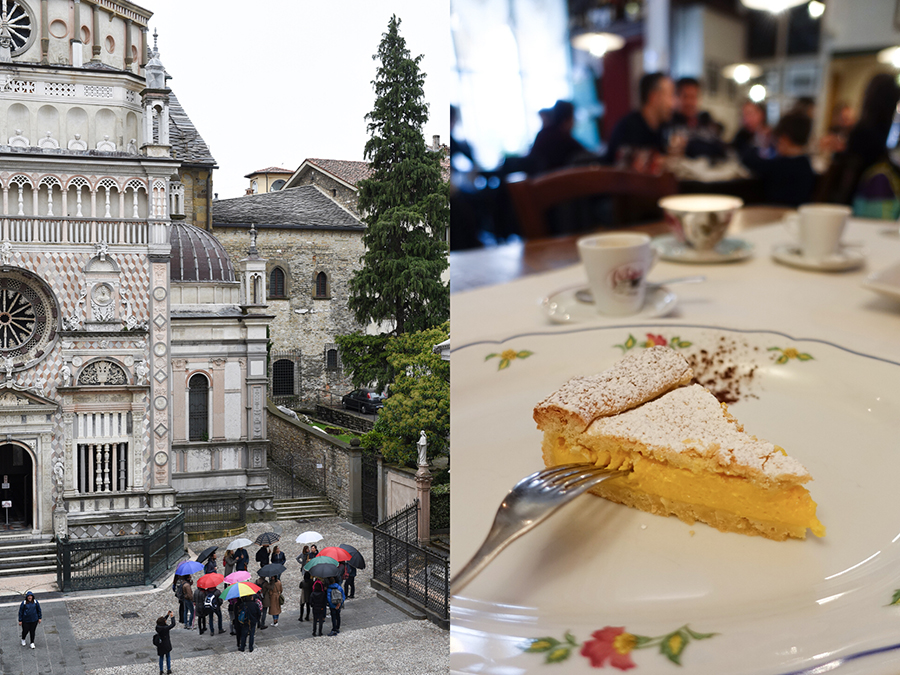 Finding a restaurant wasn’t easy as many were full, everyone taking the opportunity to stay warm and dry. We stopped at Al Donizetti as there was a large outdoor under-cover area where a solitary man sat drinking red wine, smoking a cigar and wearing a Fedora. There was plenty of room, outside at least. Al Donizetti is also a pasticceria (bakery), so the window display on the main street was all cakes and sweets. We managed to squeeze onto a table and ordered a glass of red. We opted for some hearty local food: the piatto Bergamasco (polenta, Taleggio cheese, ragú and an excellent salamella sausage) for me and polenta taragna (thick soupy polenta laden with cheese and butter) for Mark. And as this was a pasticceria, we also ate cake – apple strudel for Mark and a spectacular pie filled with lemony custard for me.

I was excited about visiting the Sud Tyrol for the first time, looking forward to exploring the Austrian influence on this area (as my grandmother was born in Austria). We stayed in Bolzano, in a very cute Air BnB apartment owed by Alexa, who arrived on a pushbike and like many of the locals, speaks Italian with a hint of a German accent. Bolzano is very pretty, though does not really feel like it is in Italy: shops with names like Rubatscher; signs where Bäckerei and Panificio (bakery) are written on the same sign, and street vendors selling fat white sausages (weisswurst) in bread. 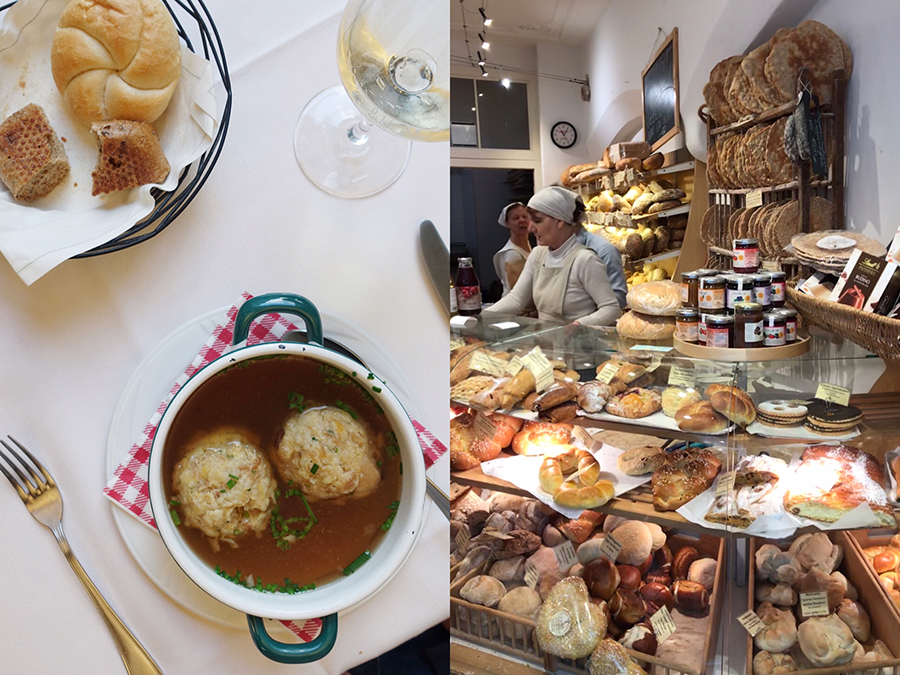 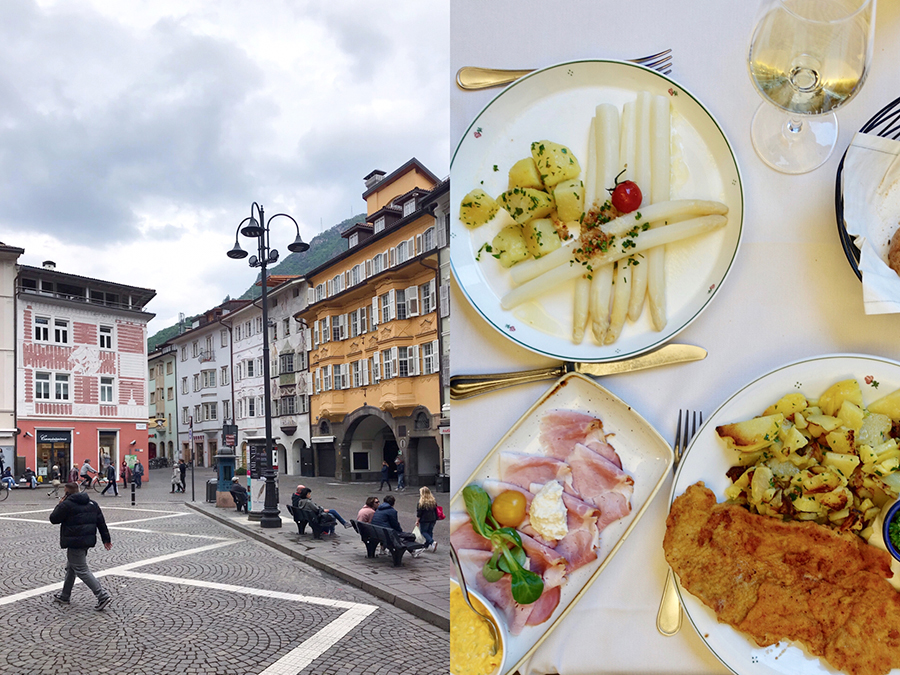 For our time in Bolzano, I had planned a day in the town itself, a few days exploring the nearby medieval castles (there are dozens) and a day on Lake Garda. We ate twice at  Wirtshaus Vögele a restaurant that Alexa had suggested and my internet search confirmed. It was also one of the busiest places in town. The menu had a dedicated selection of traditional dishes as well as seasonal specialities. We ate tasty golf-ball size canederli (bread gnocchi laced with cheese and cured meats) served in a beef broth, a wiener schnitzel (crumbed veal) almost as large as the plate with pan fried potatoes, and potato gnocchi with a rich goulash. The sun came out briefly and I took the opportunity to try the spring-inspired plate of steamed white asparagus (delicious, I could eat these every day), pan fried potatoes, hand-cut ham off the bone and horseradish sauce. How I love this type of food! And there was a fine apple strudel too.

To close, a note about eating lunch in Italy: the majority of restaurants open at 12 noon and close their doors at 2pm. If you are planning to eat in restaurants listed in Osterie d’Italia you would be wise to book; you will find that staff generally speak some English. I personally don’t use Tripadvisor for anything, though some years ago I used to. Anyone can post photos and their thoughts on the restaurant, from people who actually went there to people who didn’t; and nothing can replace a professional food reviewer.