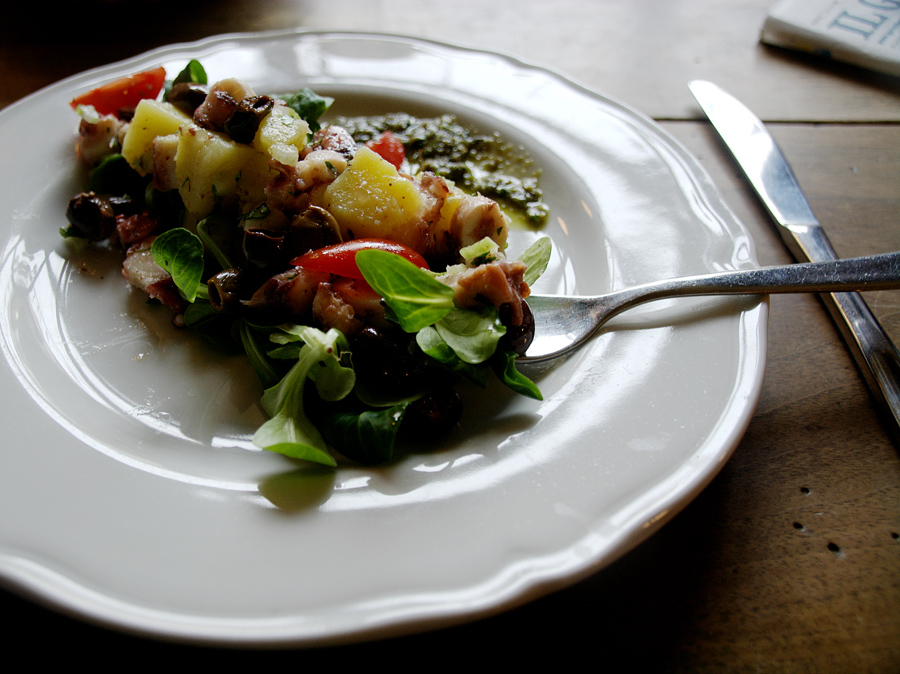 To be in Venice last December was magical. There was a constant low-level fog over the city, making it pensive, dark and mysterious. I spent several days there doing research for a food project, writing in my apartment in Canareggio in the evenings and wandering down laneways, sipping ombre di vino and eating cichetti. So what is this project you may ask? My last minute trip to Italy was because of the cookbook publishing deal I signed late last year. This is really exciting (to say the least) and an explanation of why my blog posts have been less frequent than I would like in the past few weeks, as I am busy cooking, recipe testing, photographing and writing. I have a huge favour to ask you all…but before that, back to my blog post and a recipe inspired by my visit to Venice. 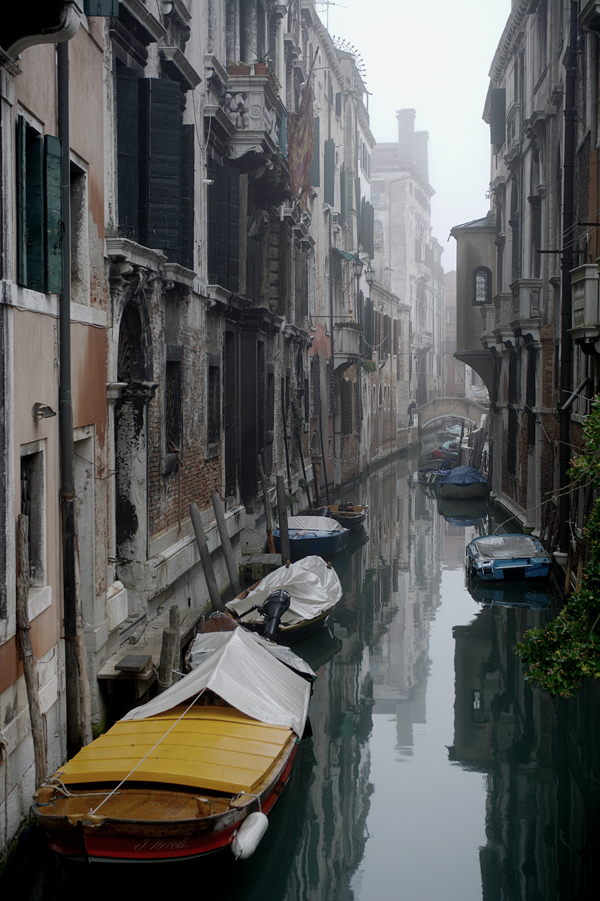 I had planned to catch up with my friend Enrica Rocca who lives in Dorsoduro while in Venice; she had emailed me about having a Prosecco together when I told her I was researching for a cookbook. But when I got in touch with her, I found out that she was leaving to spend Christmas in Sicily the day after I arrived. So there I was, in Venice on my own, knowing no-one. But after I settled into my Air BnB apartment, looking out over the Canale di Canaeggio from the apartment window, I came to the realisation that it was thoroughly captivating and immersive to be completely alone in this beautiful city. It was some time since I had stayed right in Venice; last time I had stayed on the mainland in Mira and had left my heavy SLR camera back at the apartment on the day I visited Venice (it was too heavy to carry), so all my photos on that trip were taken with my iPhone. This time I had the opportunity to be a real tourist and have a heavy camera around my neck the whole time, plus a tripod under my arm. I went to my favourite places including Palazzo Fortuny and the Jewish ghetto. A trip to Venice would not be complete without a morning visit to the Rialto fish market, which was busy as ever, in particular in the lead-up to Christmas, when shopping for food seems to have a heightened sense of urgency. Queues were three-people deep and I stood watching seafood being sliced, wrapped and money being quickly exchanged before fishmongers moved on to the next customer. All the photos are quite dark and misty, just like Venice was when I was there, in the depths of winter. I bought some fondi di carciofo (artichoke bases, already prepared and sitting in a tub of lemony water) and my favourite radicchio rosso tardivo at the market and made them back at the apartment, drinking local Friulano wine. 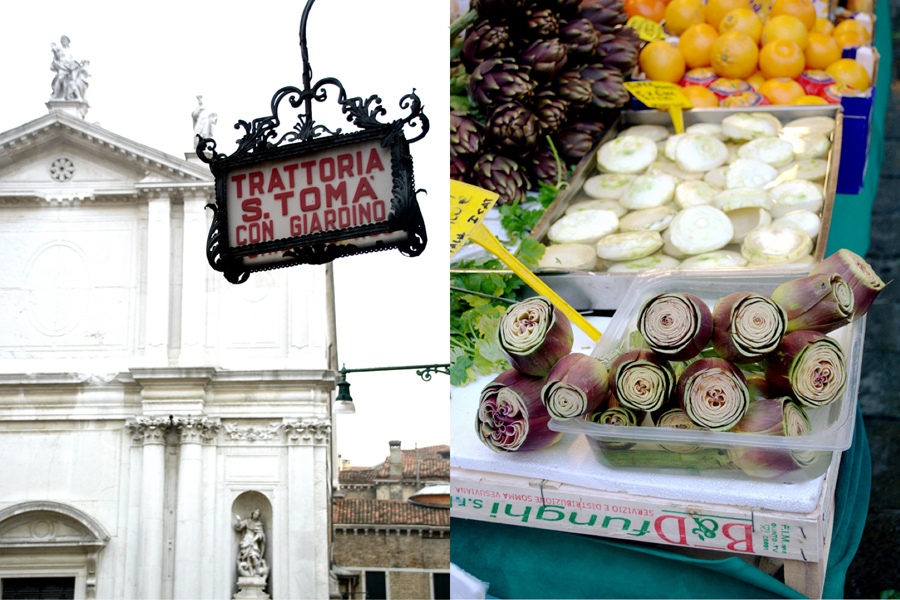 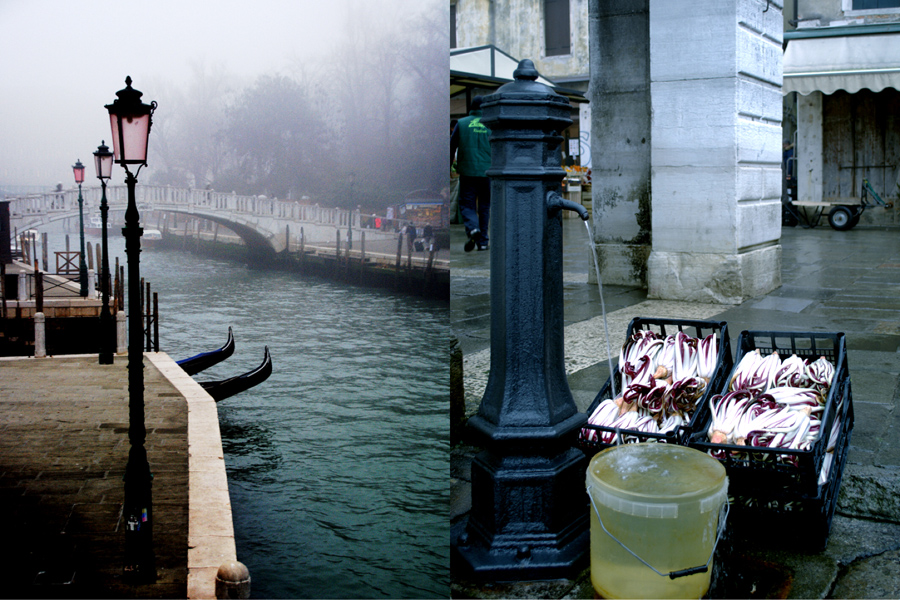 I enjoyed several wonderful meals there, gravitating towards seafood, in particular cephalods (squid, octopus and cuttlefish). When in Venice, do as the Venetians do! Highlights included a visit to La Vedova near Ca D’Oro and to Osteria da Codroma, in Dorsoduro. I ate a rather wonderful octopus and potato salad at the latter. I had wandered in there just before 12 noon, looking for cichetti (which they were just starting to prepare) and the place was empty. I took a seat at the table closest to the window that had beautiful filtered light, read the local “Il Gazzettino” newspaper, ordered a plate of potato and octopus salad and a glass of Prosecco. It was a pretty special moment and a beautiful memory of my three days in Venice. 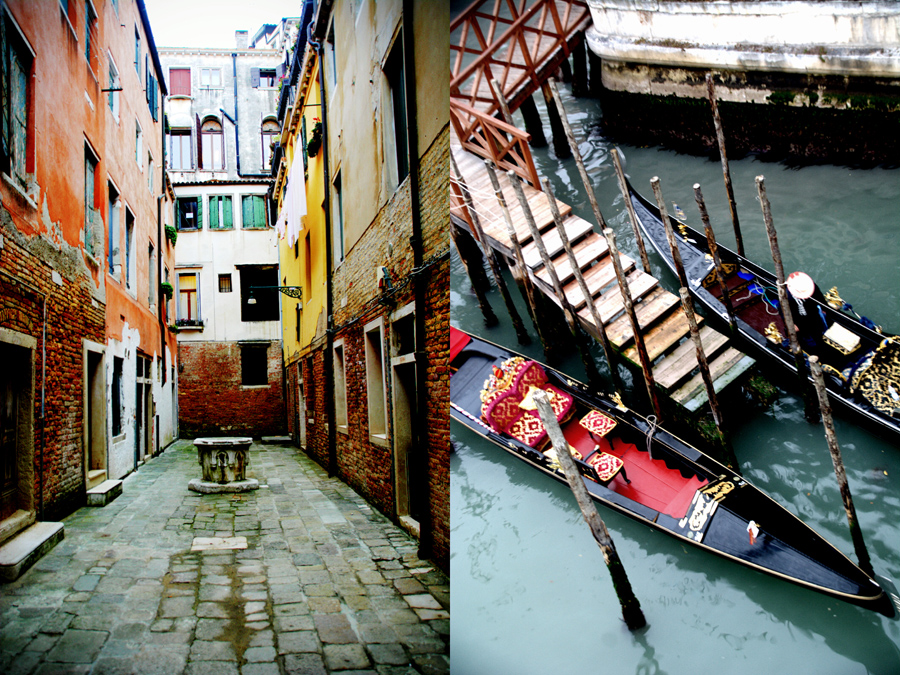 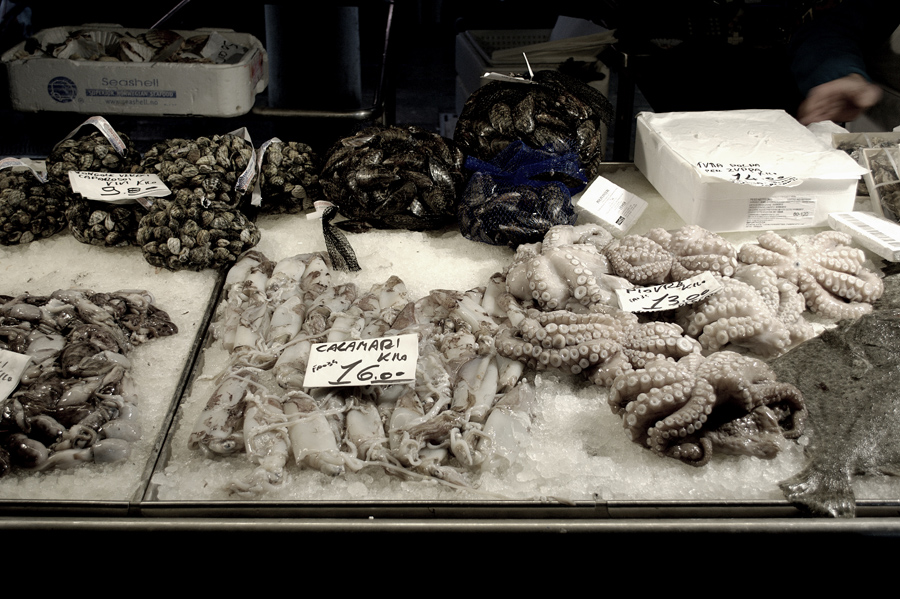 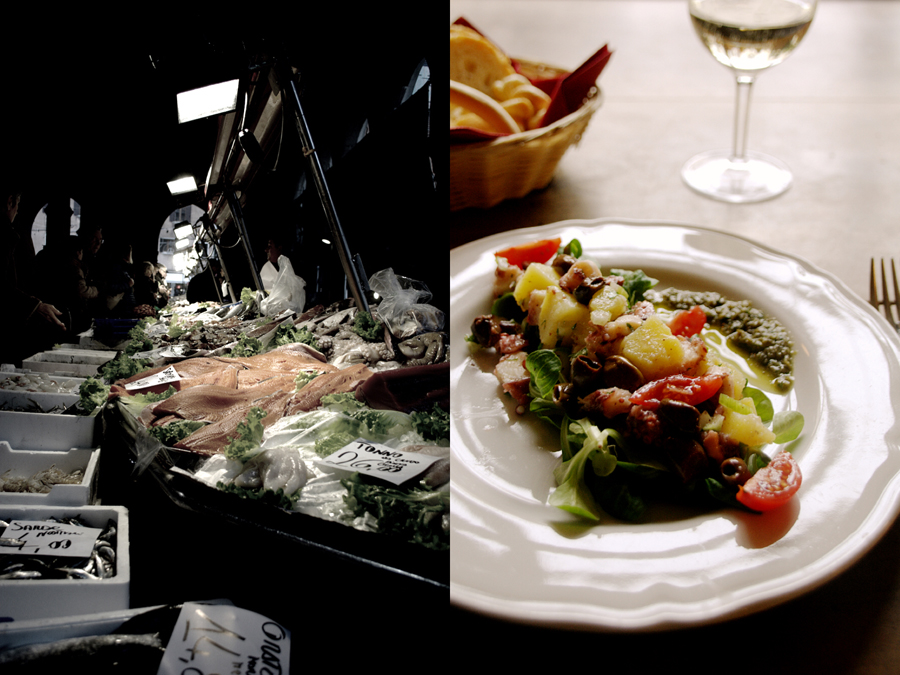 It is a couple of years since I made octopus salad at home. It was one of my father’s favourite dishes and mamma used to make it for him, often using baby octopus, though I like the tentacles of a meatier more mature creature. In Venice the octopus was served with cold potatoes and other tender salad ingredients, and a dollop of basil pesto on the side. Cooking the octopus at home can seem a bit daunting, but you can generally buy the tentacles separated from the creature, which makes the cleaning (and cooking part) much simpler. I love making a large quantity as it keeps for almost a week in the fridge and is in fact a rather cooling summer dish here in Australia (as well as being ideal in an Italian winter!). Note that the recipe below contains garlic, which isseldom used in Venetian cooking but always used in Istrian cooking. My mother (the Veneta) totally changed her way of cooking and eating for my father (the Istrian), so the recipe below contains garlic. Please feel free to omit this ingredient of it is not to your taste (or you want to be traditional). 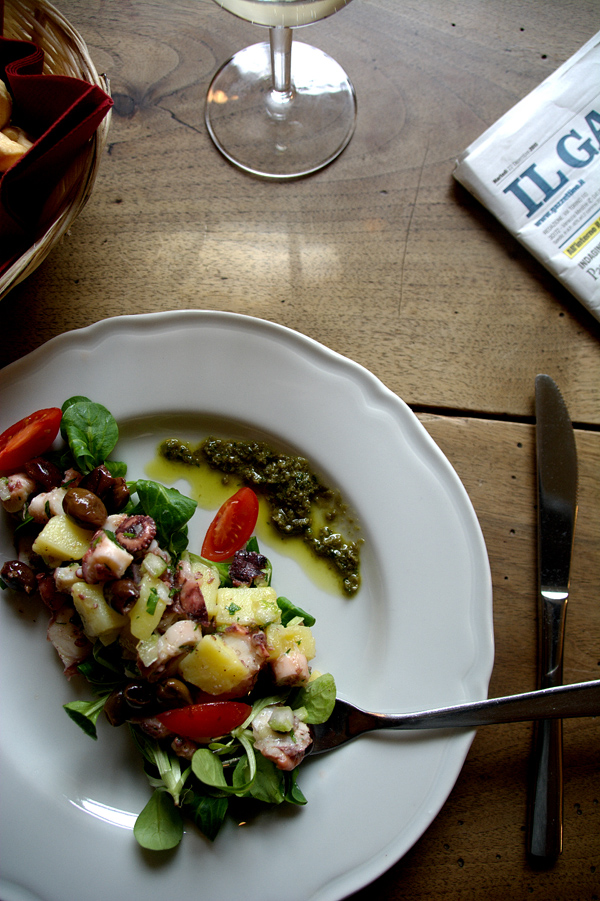 Now back to that favour… I would love if you could help me by testing some of my recipes in February and March. I will email you a couple of recipes and then you will follow the instructions to make the dish, critically appraising the methodology as well as the taste. If you have a bit of experience in the kitchen, some time up your sleeve, love simple Italian food and can help out with testing some recipes, please email me at paola@italyonmymind.com.au

Wash the octopus/tentacles in a large bowl/tub of water. In the meantime, fill a large pot which has a lid full of water and bring to the boil. Dunk the octopus/tentacles in and out of the boiling water in quick succession (this is said to tenderise the flesh) and place it in the water after the last dunking. Add the vinegar to the water and bring it back to the boil. Allow it to simmer, covered for about an hour until the flesh is tender when prodded with a fork. Start testing it after 40 minutes of cooking. You want it to be tender but still keep its shape. Remove the pot from the heat -don’t drain the water – and set aside to cool completely. This may take several hours depending on the size of the octopus/volume of tentacles, the amount of water etc.

Once it has cooled, remove the octopus/tentacles from the water. Prepare a work surface and using a large knife cut off a tentacle at a time (if you have a whole octopus), and remove the skin, which should come off very easily. You may like to keep part of the skin closest to the tip of the tentacle in place, as the suction cups are edible and that curly part looks rather nice. Chop into bite sized pieces and place in a ceramic container with a lid.

Add the olive oil, lemon juice, chopped garlic and parsley to the bowl of octopus pieces and salt to taste. Quantities vary according to taste of all of these so your best bet is to taste as you go. Insalata di polpo keeps covered in the fridge for about 5 days. Remove from the fridge about 30 minutes before serving and give it a good stir as the marinade may have settled.

Serve on its own or with diced cold cooked potato, chopped cherry tomatoes, a handful of olives, some finely chopped celery on a bed of baby lettuce leaves. Add extra extra virgin olive oil if you like, a bit more sea salt (to taste), a squeeze of lemon juice (if you like) and a dollop of basil pesto (recipe below) on the side.

Put the basil, parsley, garlic, pine nuts, anchovy, salt and olive oil in a small food processor and process until it is smooth to your liking (it is ok for it to be chunky or smooth, it depends how you like it). If not using immediately, place in clean glass jars that you have sterilised by placing the jar and the separated lid in the oven at 110C degrees for about 15 minutes. Cover the pesto in the jar with a layer of olive oil to protect the pesto and place in the fridge until ready to use. Stir in parmigiano to taste when you are ready to use.