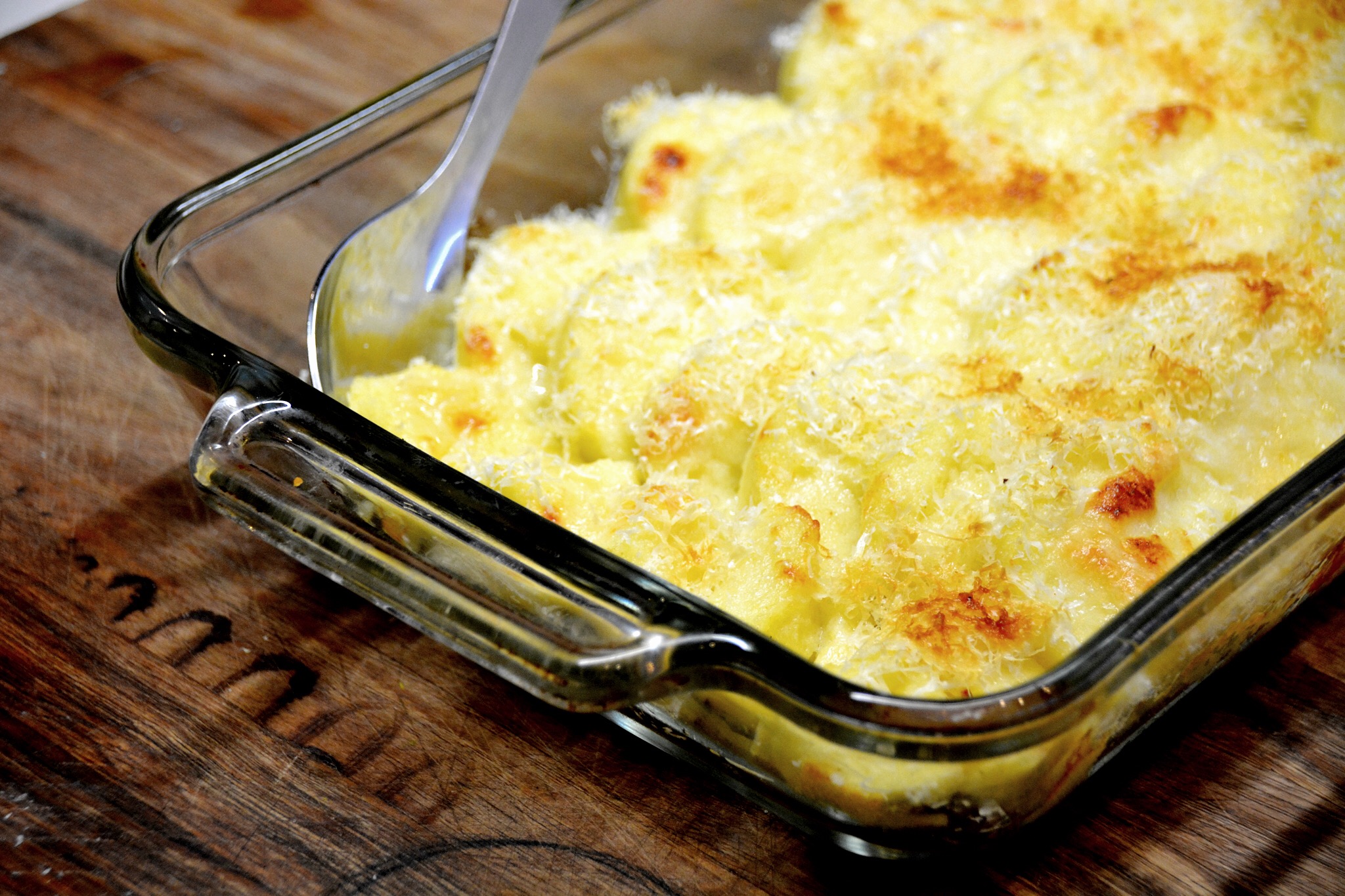 Gnocco (plural is gnocchi) is a funny word. It means a knuckle or a lump and up in the north of Italy it is colloquially used to mean a “simpleton”. In food terms though it is a dumpling that makes the loveliest of pillowy primi (first course), eaten with a huge range of sauces from basil pesto, to beef ragù or a simple sage butter. Most people think of gnocchi as being made with potatoes, hand-rolled and mixed with flour (but not too much or else you will get rubber bullets). But there are also pumpkin gnocchi, beetroot gnocchi, ricotta gnocchi, or even gnocchi made with left-over polenta. The ones I am writing about today are made with semolina and milk and there is no hand-rolling involved. 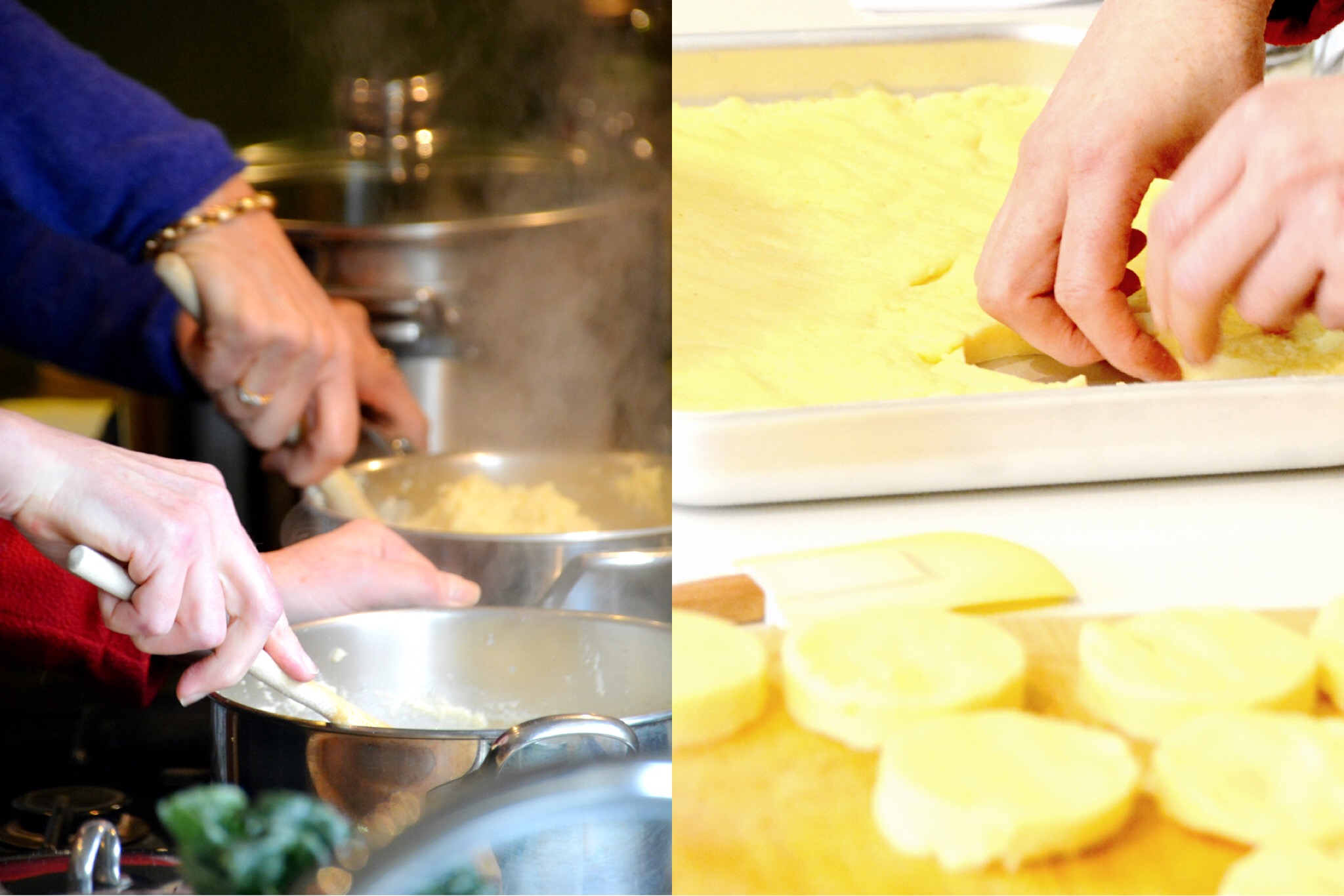 I first ate gnocchi alla Romana (Roman style) when I went to stay with my father’s sister in Lombardy in the 1980s. As she didn’t cook much, she bought them pre-prepared in an aluminium tray from a local fancy restaurant. I loved how the restaurant (that does not do take-away) prepared these dishes for her as a special arrangement because I was visiting from Australia (“viene la mia nipote dall’Australia” she had told them). She heated them up in the oven and we shared them in all their soft cheesy goodness. They were simply delicious and I remember them distinctly as it is not something my mother had ever made before at home as she regularly made potato gnocchi. They are a bit like polenta to make – at least at the start. You boil up some milk then shower in the semolina, whisking all the while, until it become thick and comes away from the sides of the pan. After cooling, little rounds of cooked semolina are baked with lots of cheese and butter. 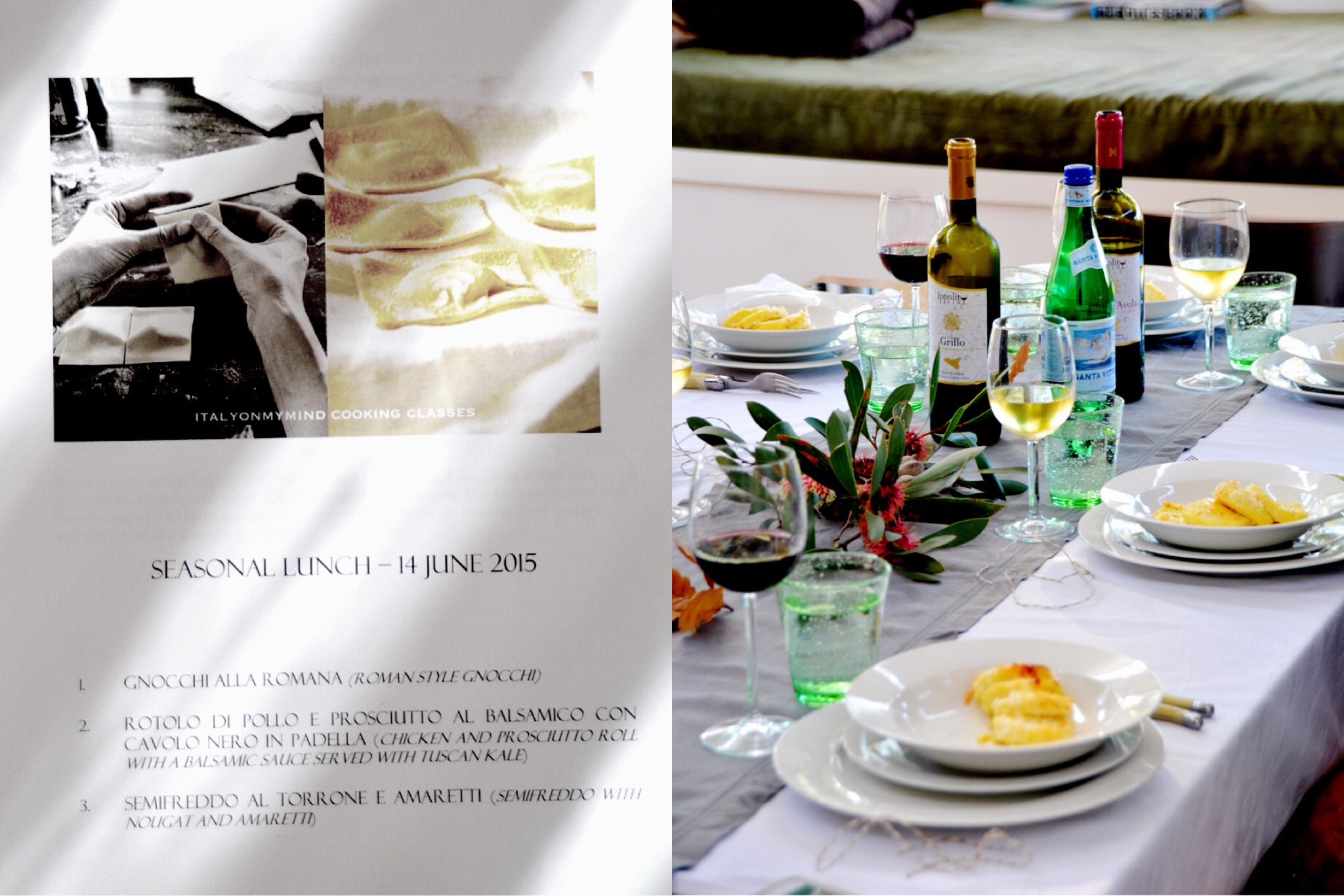 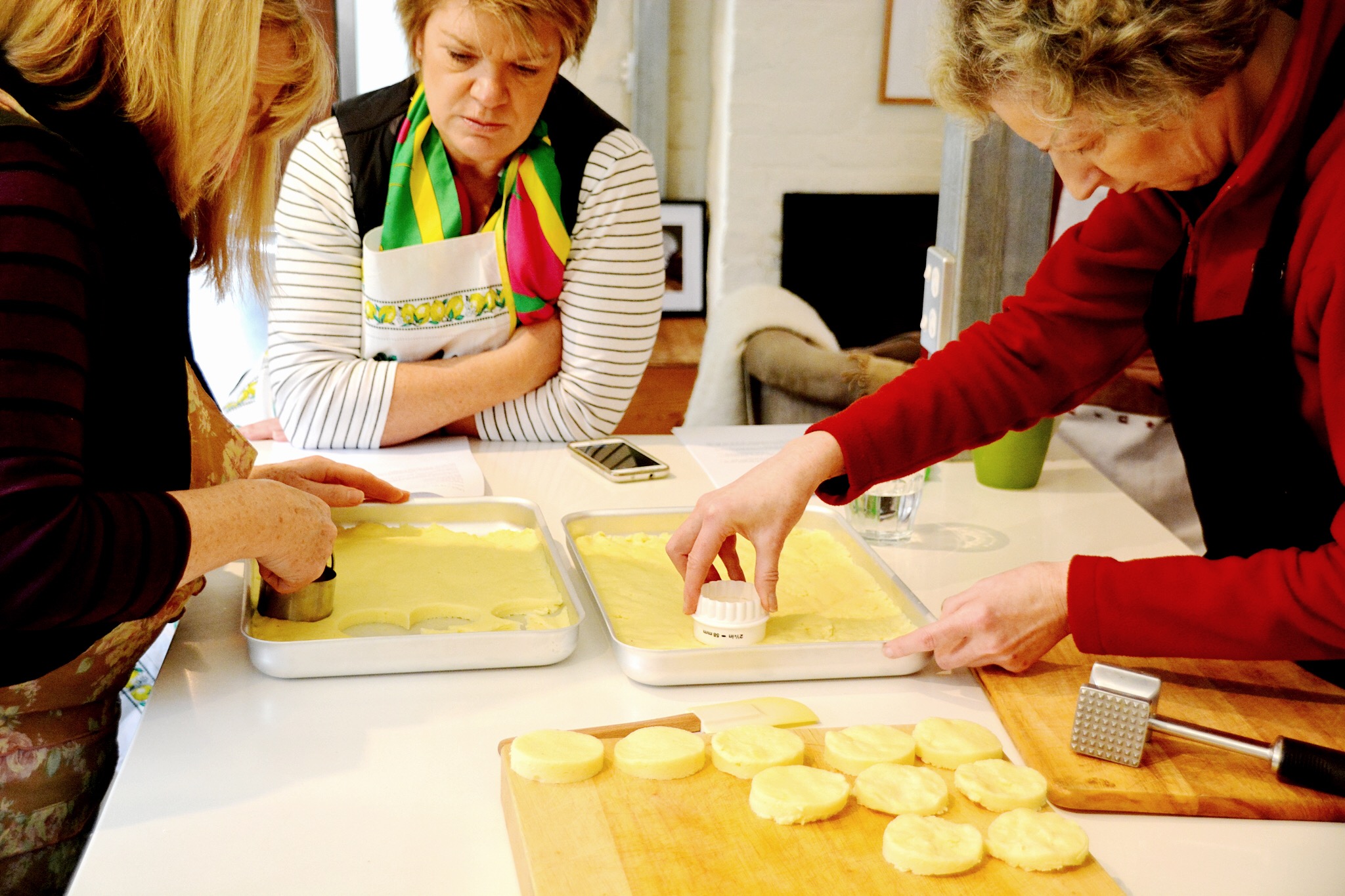 I made them with a group of six lovely ladies at last weekend’s seasonal cooking class and lunch at Prospect Cottage in Chewton. They were a huge hit with all of the ladies but especially with one, who told us at the end of lunch that she would be making them the following weekend when her future in-laws were coming over for a meal to discuss their children’s up-and-coming wedding in Tuscany. How perfect! The recipe is from the Slow Food Pasta and Gnocchi cookbook that I bought at the Feltrinelli bookshop at the railway station in Florence in April. It is a fascinating book which occupied me for the whole journey back to Rome on the train.

The photos in this post were taken at the class, I love the one of the dining table which was decorated with native flowers from the garden. I will be running a couple more seasonal cooking class and lunches in 2015 – in September and November. The food is Italian and seasonal and the days are just as much fun for me as they are for the participants. If this sounds like something you would like to do, click here for more details, I would love to cook with you. 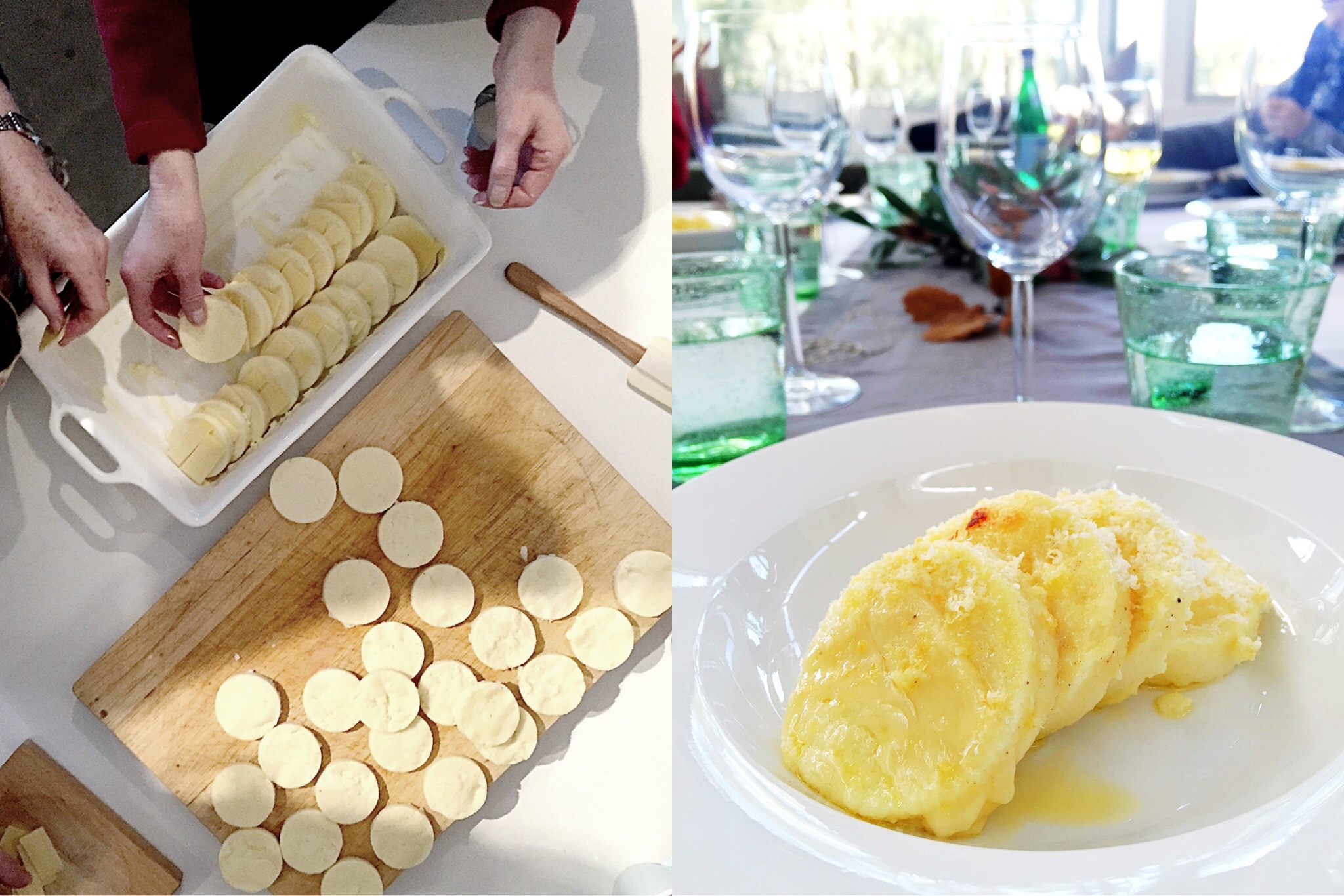 Bring the milk to the boil and add the semolina in a slow steady stream, whisking continuously. Add the butter, salt and pepper to taste and continue to cook on low heat, stirring all the while, for 15 minutes. Dampen a rectangular tray with water and place the cooked semolina on the tray, spreading it with wet hands and flattening it until it is an even 1cm in thickness. Allow to cool.

Using a 5 or 6 cm cookie cutter, cut circles of cooked semolina and layer them, overlapping slightly on a buttered roasting pan. Dot with butter, scatter on the cheeses and bake in a preheated 200C oven for 20 minutes until the cheeses have melted and the top of the gnocchi is golden. Serve immediately.