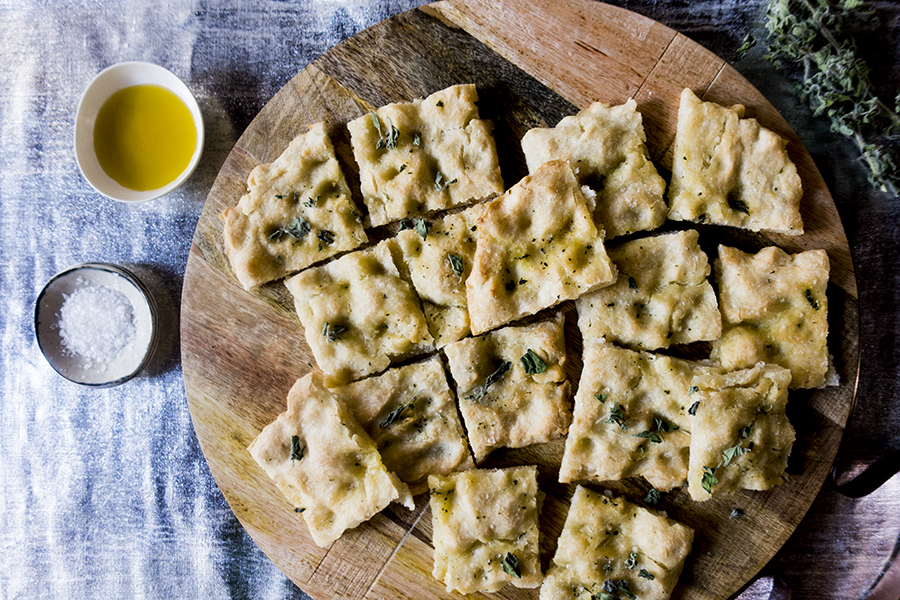 My first part time job was in a delicatessen; the Italian deli at the local shopping centre. My father used to do the weekly shopping on a Friday afternoon, guided by the shopping list that mamma had prepared the night before. The rule was, if it wasn’t on the shopping list, he wouldn’t buy it. Visiting the delicatessen was part of the weekly shopping ritual for the purchase of cheeses like Grana, Gruyere and Emmental; and if they were on the list, cured meats like mortadella and prosciutto.  The deli was long and narrow, stretching over several shops and filled with all types of pasta, marinated vegetables, tinned fish and biscotti. And the smell of cured meats and cheeses was divine. Papa’ would chat to the owner Pasquale (who most people knew as Pat) and his wife Teresa. It was during one of these chats that he somehow arranged for me to work there – after all, my father was tall, imposing and could be rather persuasive. I was about to turn 15 and they needed help over Christmas, so my first job was at the cash register. My big sister had worked in a deli when she was a teenager and into her early twenties, so it was almost like a family tradition.

So every Friday after school and Saturday mornings, papa’ would drive me to the shopping centre and I would work at Basile’s Deli, collecting money, packing bags and stacking shelves during quieter times. I would look wistfully over to the very proficient ladies who worked behind the counter and wish I too could serve customers, working the machines that sliced the prosciutto paper-thin and cut the blocks of cheeses with razor-sharp knives. I worked there for about 5 years, and eventually was promoted to serving customers from behind the counter during quieter times (much to my delight). It not only influenced my love of delicatessens but increased my knowledge of cheeses, cured meats, pasta and all other small goods. I often thought about Pat, Teresa and their children; they sold the business to another Italian fellow called Salvino. He promptly gave me notice so his daughters could work in the deli on weekends and my father refused to ever enter the deli again (and he remained true to his word and started shopping at a deli in a neighbouring suburb). I was so happy when I found Basile Imports on Instagram – crazy really that social media can connect people again after all these years. 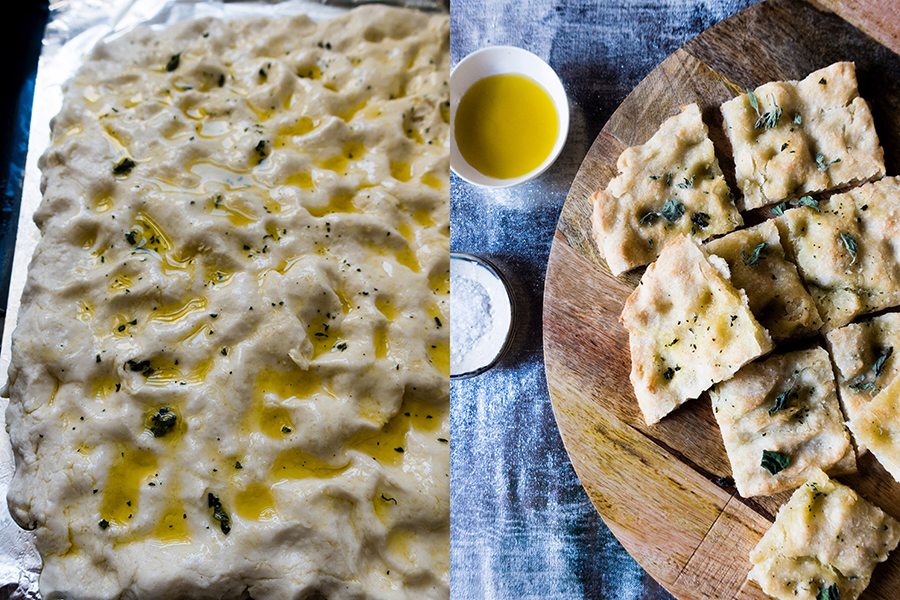 So I got in touch with the person who was running their Instagram account and to my great delight it was Patrizia, Pat and Teresa’s daughter, who indeed remembered me; she works in the family business and I was delighted to hear that her parents are still involved. I invited Patrizia to my book launch at Enoteca Sileno a few months ago and it was so lovely to see her again – she hadn’t changed a bit.

Basile Imports not only import but also distribute a huge range of Italian products in Australia, including my favourite Antico Molino Caputo flour from Naples. Caputo make beautiful soft wheat flour for pasta and gnocchi, semolina rimacinata and a new gluten free product called Fiore Glut. Patrizia sent me some Fiore Glut to try out, and I really haven’t looked back. It makes a great gluten free focaccia, in a shorter time than you would if making a normal focaccia. It has a lovely chewy texture and is great to eat straight out of the oven. I sprinkled mine with sea salt flakes and some dried oregano, but you could try rosemary, olive pieces or chilli flakes. It was lovely sliced in half, like you would a sandwich, and filled with mortadella, sliced of tomato, or even just some good quality fresh ricotta. 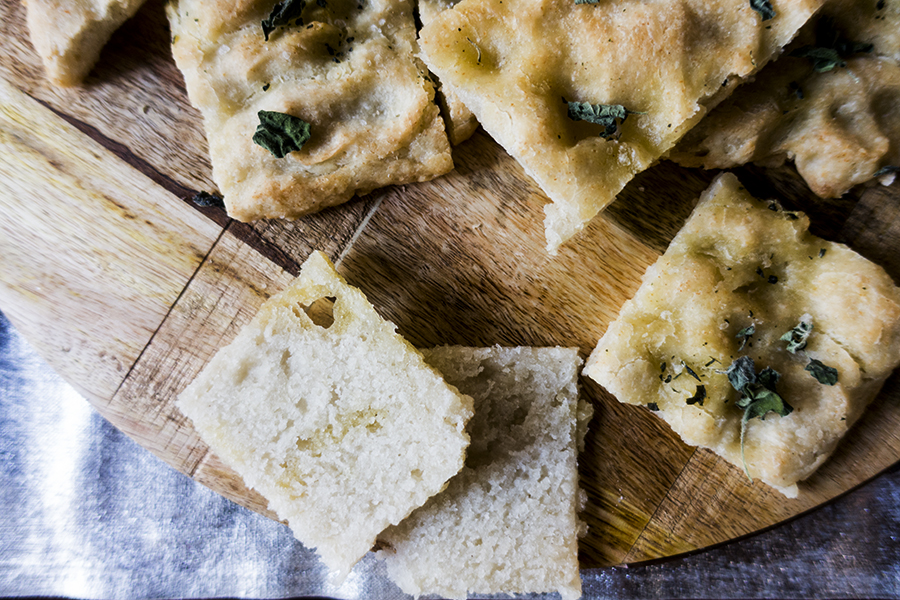 A couple of updates and special events are coming up in February:
(1) I have added a few more cooking classes here in my home in North Fitzroy up to the end of August 2017 including a new pasta sauce making class and a risotto-making class (including how to turn leftover risotto into arancini). Click here to find out more
(2) I am running a Cannoli and Panforte cooking class at Nellie’s gorgeous Relish Mama cooking school on Tuesday 7 February. There are a few tickets available so click here to find out more
(3) “A night of Prosecco and cicchetti” – join me and Melissa Brauer (the Prosecco Queen) for a night of cichetti and Prosecco. The cichetti and foods (including crostoli!) are all from my book “Italian Street Food” and will be paired with Col del Lupo and 2 Castelli DOCG Prosecco. Date Friday 24th February 2017 at GGs restaurant in East Melbourne. I will be selling (and signing) copies of my book and Melissa will be selling her lovely imported Prosecco. Link to the booking page is here. 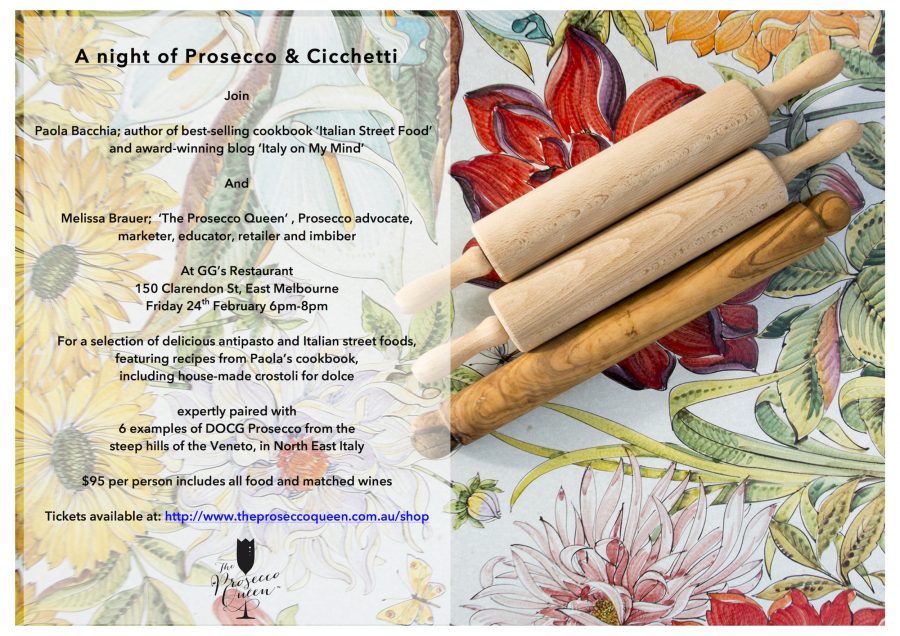 Place the flour, yeast and salt in a large bowl and give it a good whisk. Add the water and oil and stir with a wooden spoon, then bring it all together with your hands, working it to make sure it is homogenous. Place the ball of dough on a well-oiled tray (i lined mine with foil) and spread out evenly with well-oiled fingers, making dimples in the surface until it is about 35cm square. Cover with a clean damp tea towel and place in a warm place to rest for 45 minutes.

Preheat the oven to 220C. Remove the damp cloth from the dough and drizzle on some EVOO, herbs and salt flakes. Bake for 20-25 minutes until light golden brown. Cut into squares and serve warm. Gluten free focaccia is best eaten on the day it is made. 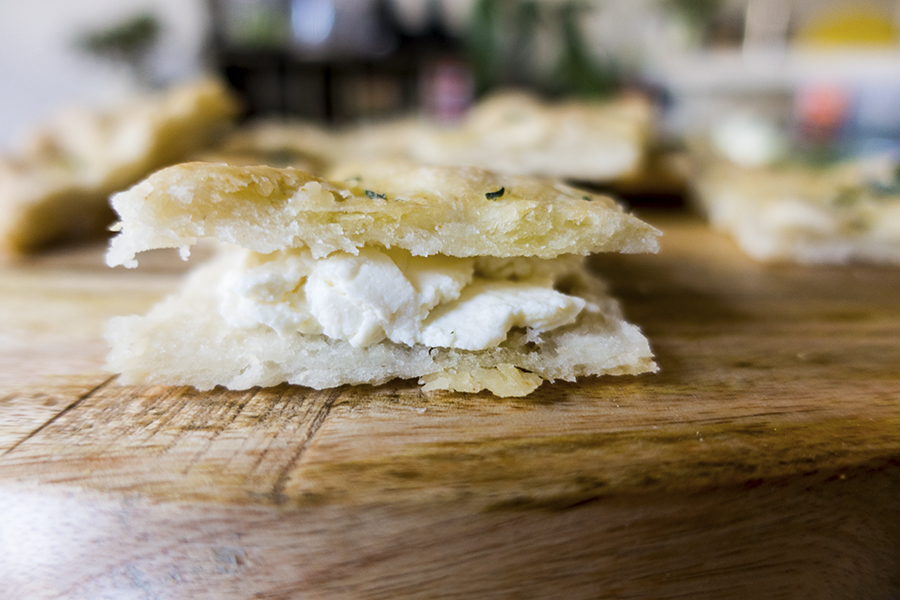