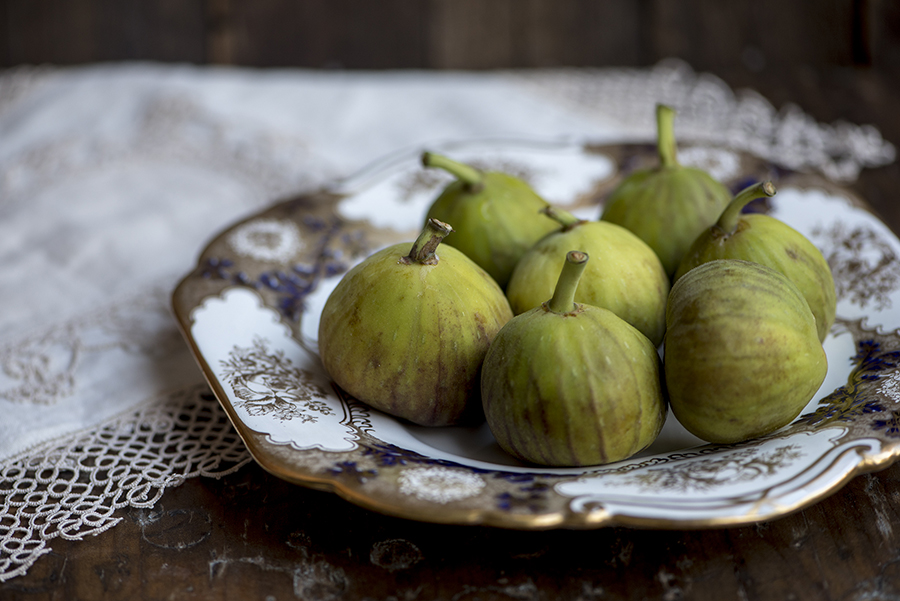 Some friends bought a house in Fawkner last year, a house that was built in the early 1960s by a couple who migrated from Abruzzo to Australia. They had been part of a close-knit community in suburban Melbourne, and were part of the last big wave of post World War 2 migration. It was the Italian dream to own a new home (coming from a place where everything was so old), in a country that presented so many opportunities to start afresh. The Abruzzesi, like my parents, bought a large block of land, large enough to build a family home and a garage. At that time Fawkner was starting to boom as a suburb for European migrants, and their neighbours were from other Italian regions including Calabria as well as Greece and Malta.

The challenges of living in Australia for European migrants during those times have been told through the generations. It was not the distance from family and friends (these were the days when there were rare conversations over crackling phone lines and letters took closer to two weeks than one to arrive), because you knew what lay ahead in travelling to the other side of the world to start a new life. The real problem was the food. My parents lamented about it well into the 1970s (“i australiani no i saveva cusinar”) – it was all about mutton, dripping, over-cooked cabbage, plastic-like cheese and iceberg lettuce. What they missed most was being able to find fresh produce locally, the varieties they were used to and the ability to turn it into food that would last your family through the season.

The large backyards of post WWII Melbourne were ideal for children’s swings and large spinning clothes hoists, but they also gave you the opportunity to plant fruit and vegetables and keep chickens. The garage was an important consideration when planning for a new home; not only did it need to fit a car, but it should have have enough space in which to house a workshop, a space for food preparation and storage, possibly even a second kitchen. As far as the Italians were concerned, this was the true purpose of the garage, a space where you: made your own wine; brined and salted your own olives; made your own passata from late season tomatoes, picked when vines were dripping with juicy red fruit; turned freshly picked plums and apricots into jams and in winter, your trusty Italian butcher would procure a pig, enough to make plenty of salami, capocollo and fresh pork sausages to share. Recipes and methods were debated and shared (though sometimes jealously guarded and a key ingredient left out when relaying the recipe to others) and meals were made for communal times with the extended family and your neighbours. And the back fence usually had a door cut into it; that way you could easily drop in next door unannounced for a coffee, a game of cards, a chat and of course to eat and drink home made wine. And your neighbours always made you feel so welcome. 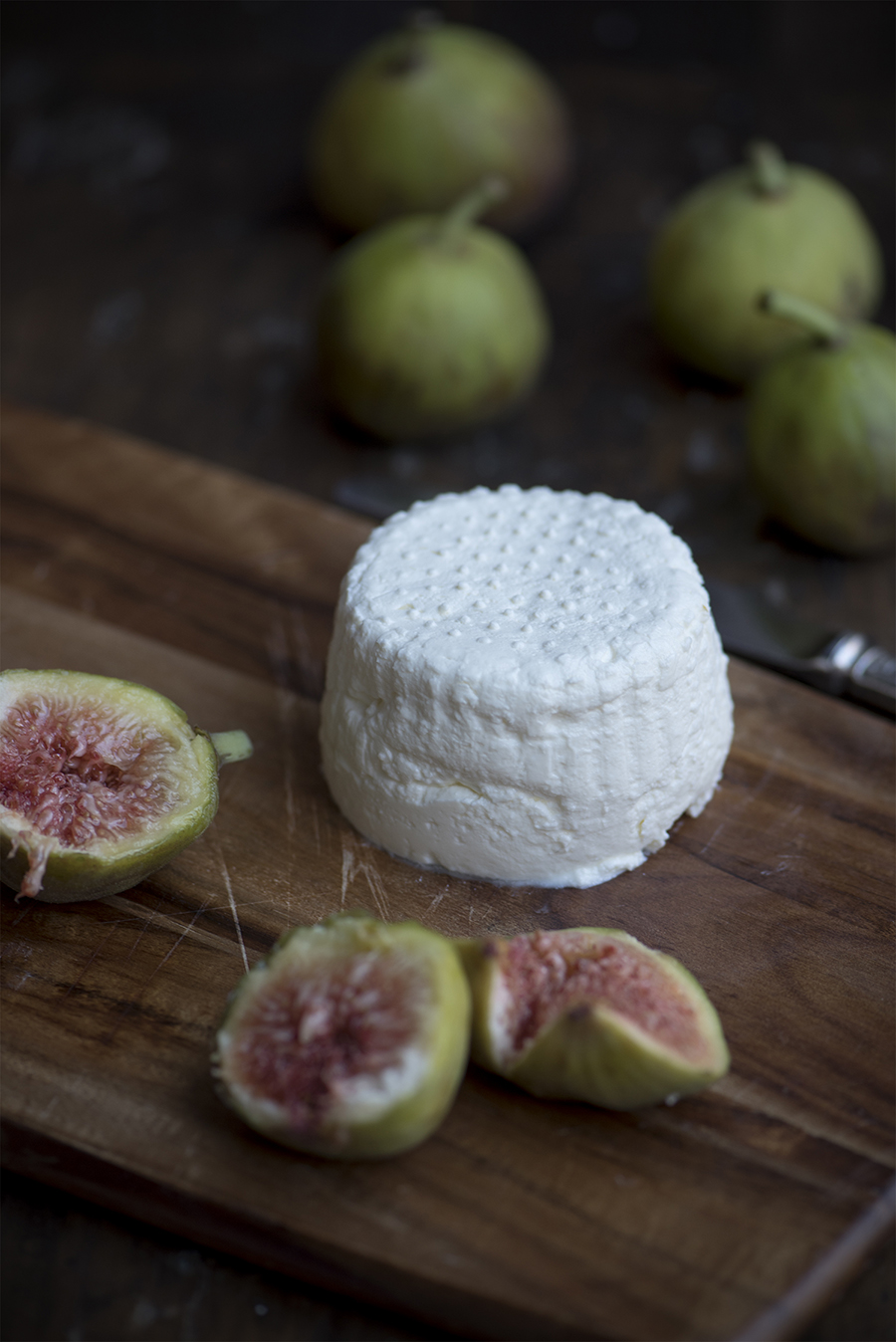 When my friends (who happen to be Italian) moved into their house in Fawkner, it had been empty for a while. That is, empty of people. The furniture had stayed as it had been the day the last of the elderly Abruzzese couple passed away. For years the children could not bear to touch the family home and their memories. When they eventually decided to sell, it was open for inspection with a good amount of furniture and fittings still in place. They were cleared out just before the settlement date (and sadly the grappa-making still which had been there was removed from the garage). Once my friends moved in, one by one the neighbours started stopping by, to see who had moved in and what they were like. As my friends are very much in the mould of “old school” Italians, the elderly neighbours warmed to them and welcomed them to the community with open arms. They took to dropping in to see my friends most days, just like they had with the Abruzzese couple and over time, they told them stories of the couple who had lived in the house. One story that has stuck in my mind is the story of the fig tree.

The backyard was quite overgrown when my friends moved in, but little by little, as they started renovating the house, they also cleared the garden to reveal a small orchard: lemons, apricots, plums, persimmons, olives and a majestic fig tree. The fig tree, so the story goes, was grown from a cutting that had been brought back from Italy. It had been smuggled back in the plane inside a walking stick, hidden from the authorities who would have impounded it. Now this is probably something that I shouldn’t condone (as there is a good reason there are tough rules around importing plants without appropriate quarantine periods), however I marvel at the ingenuity of the couple. It arrived and was retrieved from the inner chamber of the stick safe and sound. It was planted in the backyard and thrived, even apparently spawning other trees in the neighbourhood. When I was told this story, I couldn’t wait to see the figs it produced – and this week I finally did. They were a lovely green variety, picked perfectly ripe, sweet and luscious. Mark and I greedily dug in but I managed to put a few in the fridge. I was going to bake with them, or make a recipe for my website but it seemed a real pity to do anything with them apart from just eat them as they are. In the end I decided to pair them with a simple savoury ingredient – fresh sheep’s milk cheese. 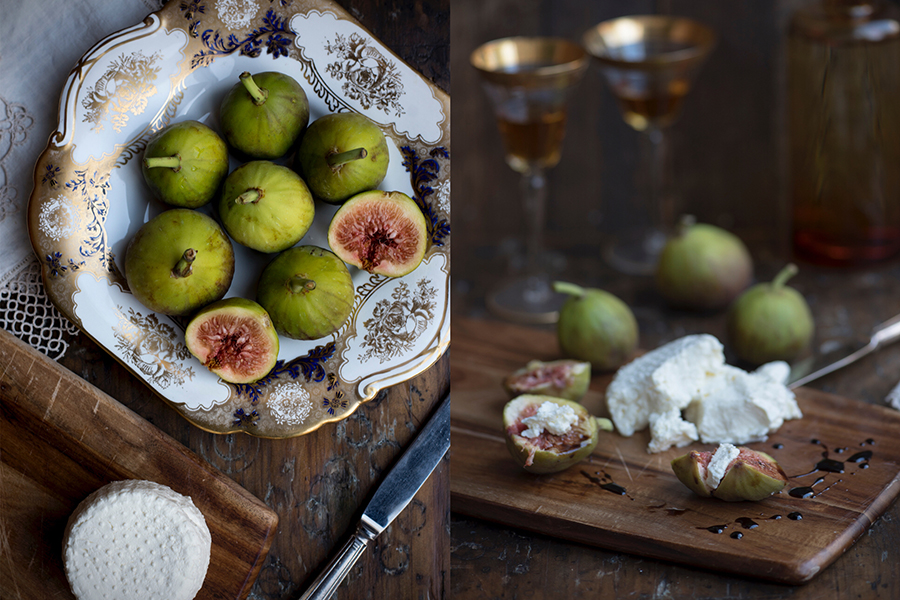 I have been following Pecora Dairy (pecora means sheep in Italian) for some time on social media. I am very fond of sheep’s milk cheeses, and there are many varieties in Italy, but they are rare as hen’s teeth (or rare as sheep’s milk) in Australia. There are a lot of sheep in Australia, but true to Aussie form, we eat them, not milk them. The word “pecorino” means “sheep’s milk cheese” in Italian and somewhat confusingly, the word “pecorino” can be applied to cheeses made with cow’s milk made in a “pecorino style”. If you really want to try authentic sheep’s milk cheese, look for labels that say “sheep’s milk” or “ewe’s milk”, not just “milk”. You can find imported Italian hard sheep’s milk cheeses, which are labelled “Pecorino Sardo” or “Pecorino Romano” (great for grating on pasta) and if you want to try locals cheeses, try those made by Pecora Dairy in New South Wales. Cressida and Mark McNamara own an 80 acre farm with a sheep’s dairy. Cressida got in touch with me a few weeks ago as she wanted to send me a number of their cheeses; I jumped at the opportunity to try Australian sheep’s milk cheeses. I was given a bloomy cheese, a semi-hard cheese (Mezza) and delightful fresh ewe’s Milk Curds. The curds are set over 24 hours and then hand-ladled into hoops where they drain for another 24 hours. The resultant cheese is sweet, creamy and only mildly salty – it is absolutely delicious and lets the quality of the ewe’s milk shine through. Pecora Dairy mainly sell their cheeses through Farmer’s Markets in NSW and can be found at Caseus in Brunswick….check the Pecora Dairy Instagram page for up to date information.

So the recipe in this post is not really a recipe, it is more a matching of seasonal ingredients: fresh figs of Italian origin, soft fresh sheep’s milk cheese (that the Abruzzesi I am sure would have approved of) and a good drizzle of aged balsamic vinegar – sweetness, saltiness, creaminess, a touch of acidity. A lovely early autumn aperitivo to remember all the good things and convivial times enjoyed by the post war migrants who moved to Australia, creating their own communities through the making and sharing of food. 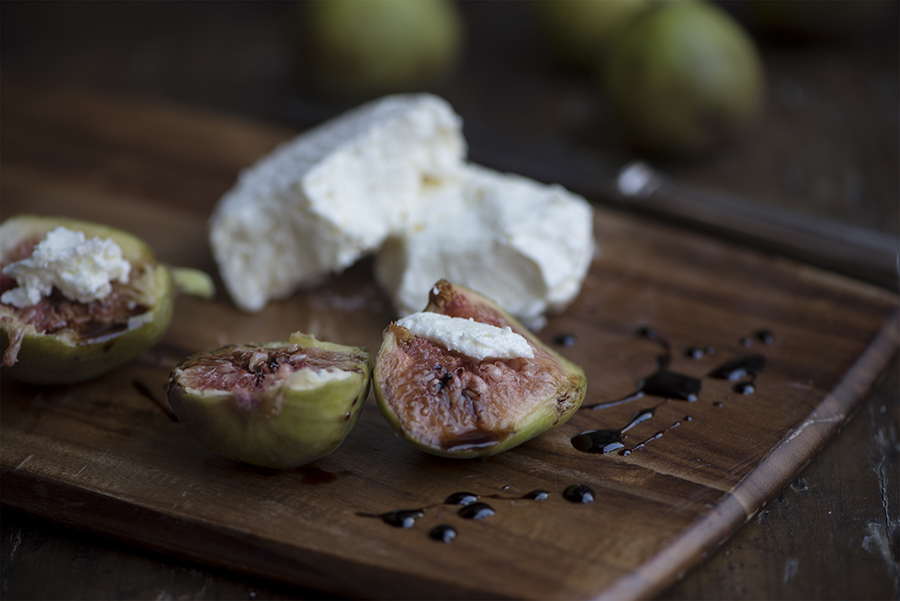 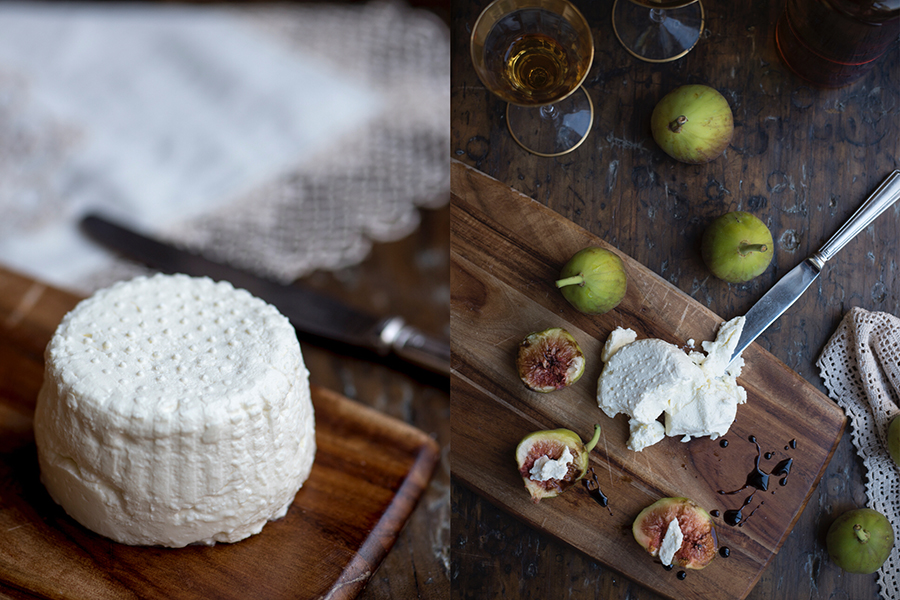 Break open the figs, spoon on the curd (to taste) and drizzle with aged balsamic vinegar to taste. Serve immediately.

If you cannot find sheep’s milk curds, use goat’s milk curd (though the taste will be stronger and sharper) or a good quality cream cheese. 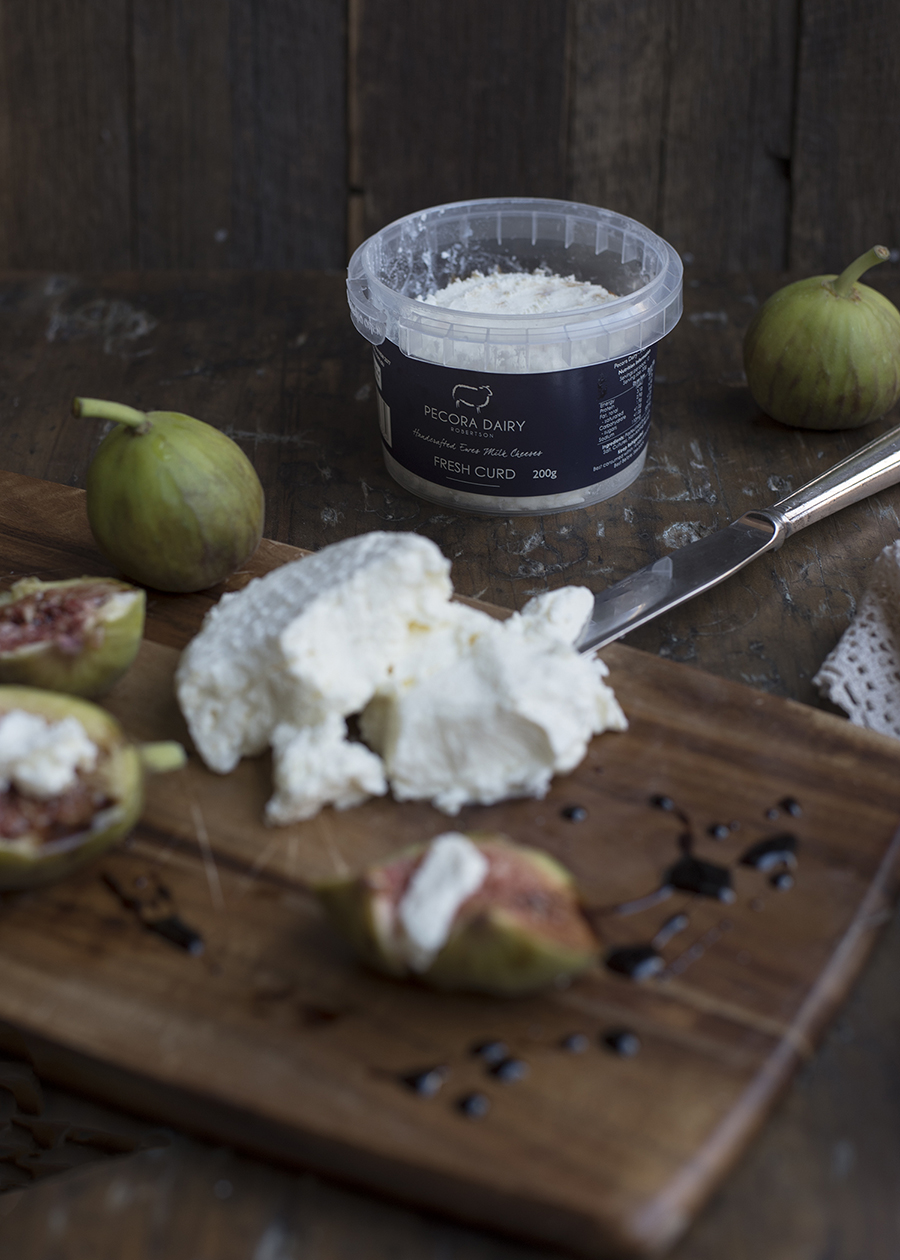 And on a sad note…..the fig tree in Fawkner was cut down a few days ago to make way for a renovation. These were sadly the last figs it produced in the backyard. A number of cuttings were taken and it is hoped they will survive in the front yard of the same house. Given their history of surviving a long journey by plane some 50 years ago I have no doubt there will be a tree there producing fruit in a couple of years.

NOTE: I was not sponsored to write this post. Pecora Dairy gave me free product; all opinions are my own