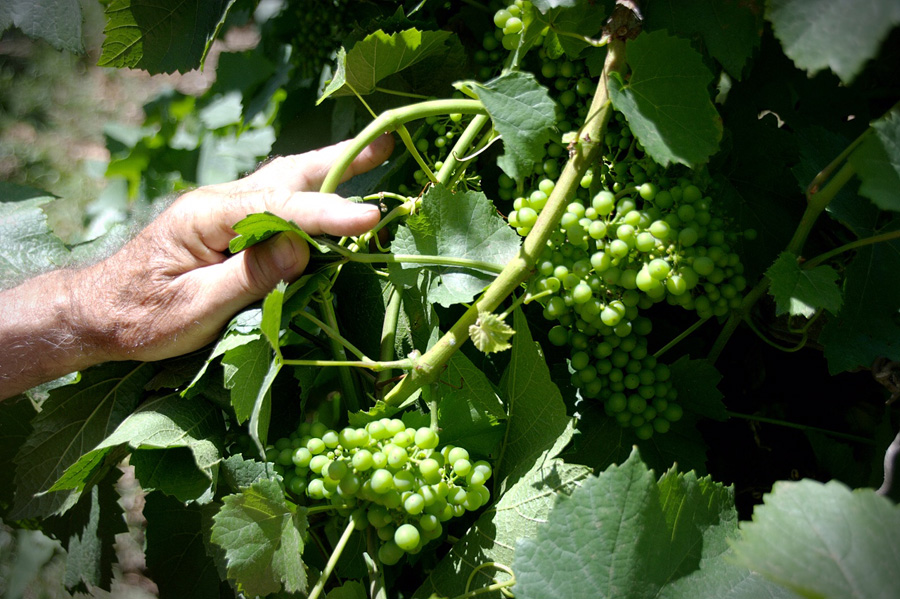 As a farmer’s market regular, I had noticed Tony Siciliano from Rose Creek Estate many times. I had even bought some olive oil from him, not really noticing that the signs on his stall said his farm was in East Keilor. He was there, with a huge smile, selling wine, olives and extra virgin olive oil, as well as assorted vegetables and fruit, all produced by him and his wife, on their estate. It was not until I received an email asking if I would like to visit Tony and his wife Lina in their East Keilor home, to promote the book The makers – a story of food, family and foreigners that I looked into it a bit more. They have a farm with an olive grove and vines about 15 km from central Melbourne, a city with around 4.5 million people….which is quite astonishing. 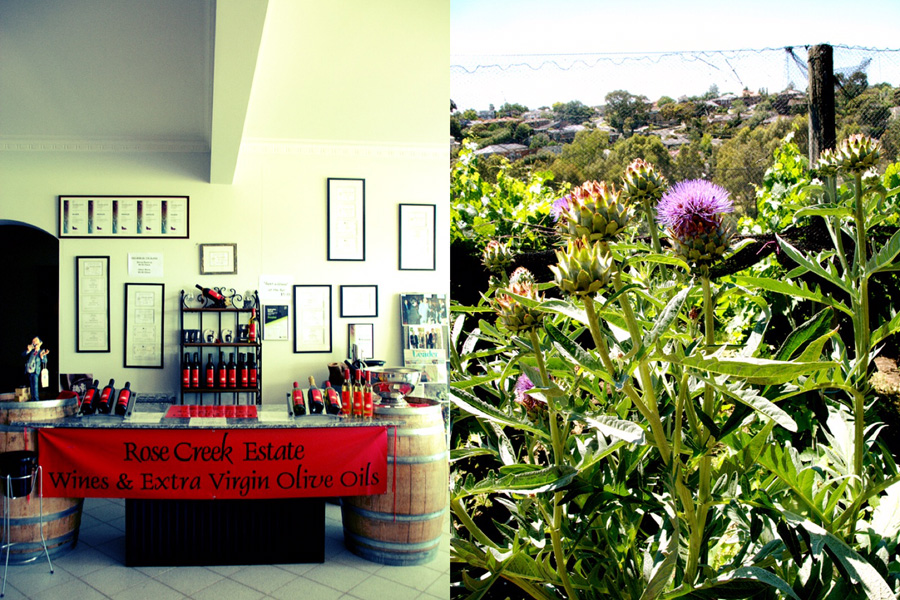 So this is how the stars aligned…I was a guest at a dinner at Grossi-Florentino several months ago that had been arranged by the lovely ladies from the online magazine An Affair with Italy. I was sitting next to food reviewer Rita Erlich, who was telling me about her passion for migrants, in particular the Italians, and the way they kept up those old traditions they had learnt in Italy in their new homeland. She did not reveal that she had a book called The Makers in the pipeline, which was going to be released shortly – and this happened to be the same book I was sent in preparation for meeting Tony and Lina at Rose Creek Estate. The book gave me a bit of insight into this couple from Calabria (as well as telling other stories of migrants, their offspring and friends and their food traditions that continue to be handed down), but it didn’t prepare me for what I found at the East Keilor home. 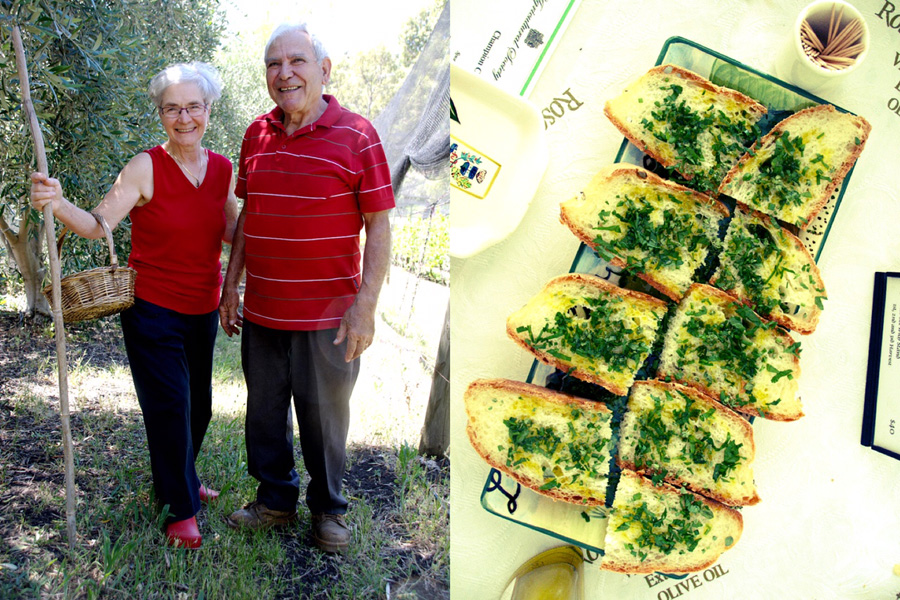 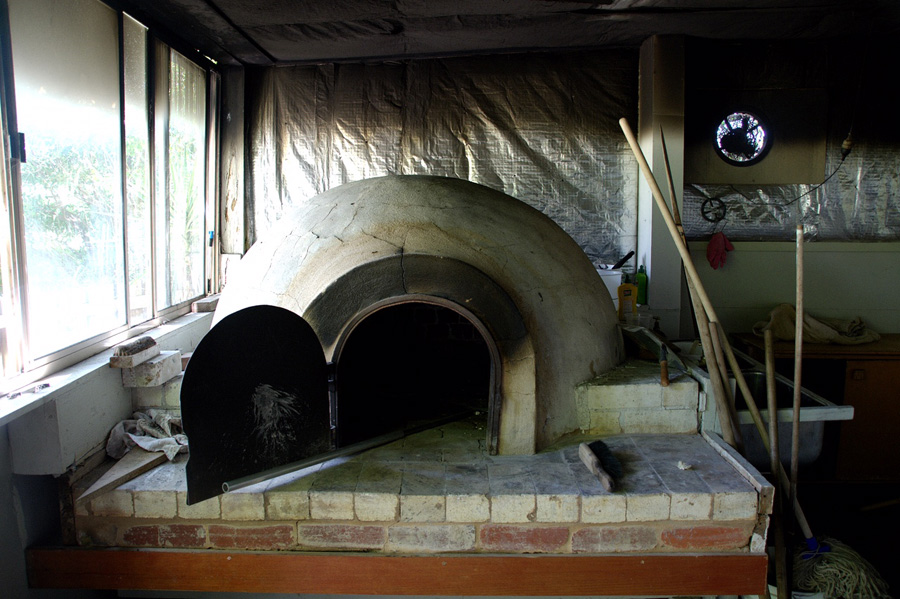 The land where the house sits is on a hill overlooking Steele Creek. From the street it looks like a regular brown-brick suburban house, with a mini-wine barrel letterbox with the number 2 on it. As you go down the brick stairs towards the front door, you can see that their house is called Villa Varapodi, named after their hometown in Calabria. Once you enter the door, the house is vast, with tiles on the floors and cavernous rooms. I met Lina and Tony in the kitchen and we had a brief chat and a chuckle when they realised I spoke English (they had thought I only spoke Italian). That said, we spoke Italian the whole time I was there, with Lina and Tony occasionally saying something in Calabrian dialect to each other (and I couldn’t make head or tail of it!). 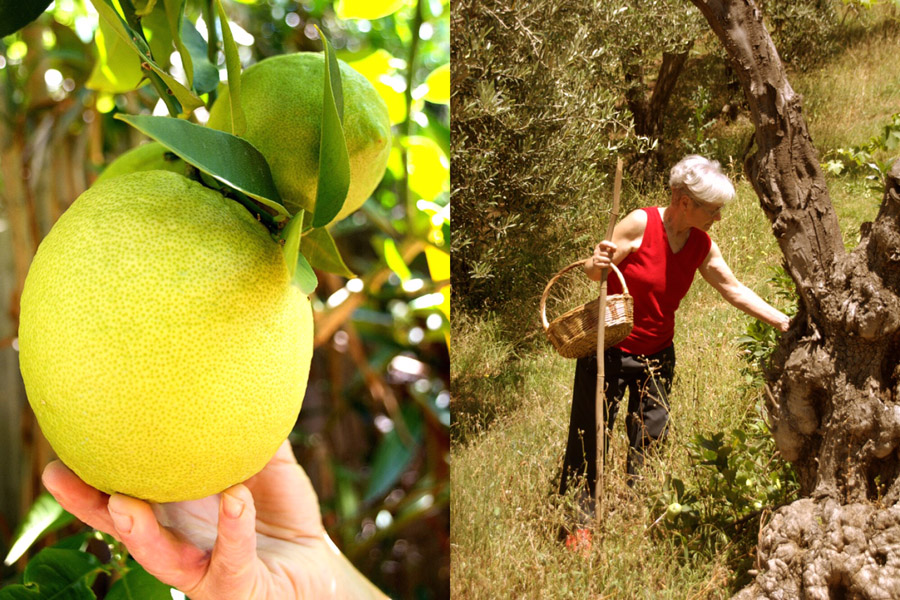 Before heading outside to see the “garden”, Lina took me to the lounge room to see the view of the hilltop property which winds down towards Steele Creek (which they like to call Rose Creek after Rose Avenue which is nearby). We then started a tour of the property via a huge terrace just outside the kitchen. The tile-covered terrace is an absolute dream, full of all sorts of fruit trees, herbs and flowering plants in pots, with branches of large trees in the garden spilling over it. Tony and Lina have jam-packed the garden adjacent to the house with a huge variety of trees including an avocado tree, fig trees (seven different varieties…I didn’t even know that many varieties existed), a Chinese date tree and even a “cedro” tree (giant sized citrus fruit found all over the Amalfi coast that I have never seen in Australia). When we faced the the huge tomatillo tree, Lina picked a couple for me to taste, and opened one up. Tony likes to call them “pomodori in camicia” (tomatoes wearing a shirt). 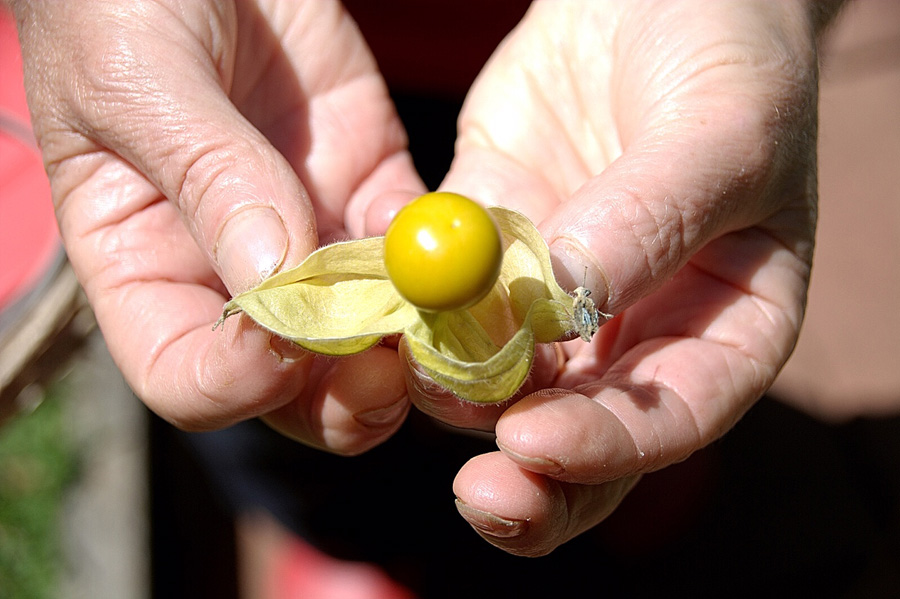 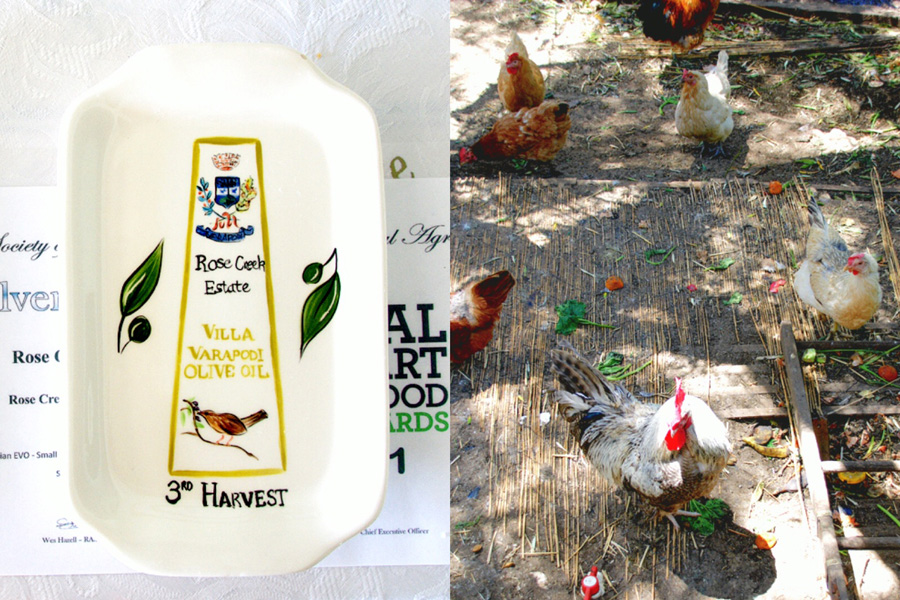 There was a large chicken coop, with roosters (that wake the couple up at 3am) and hens laying eggs. They maintain Italian traditions such as passata-making at the end of summer, salami-making in winter and preserve their excess fruit and vegetables. Lina refuses to buy supermarket produce (“it has no taste”) and tells me they could almost be self-sufficient – except for the fact that they do not grow wheat to then make into pasta. Despite the lack of wheat, the set-up is seriously impressive. Tony told me that it hasn’t always been easy. When they first bought the land and searched for the underground water table, they drilled down some 60 meters and the water they found was salty. So they had to obtain council permission to draw water from nearby Steele Creek, which forms one border their property. Tony showed me the 32 year old pump (still going strong), in a metal container made by him, which draws water into a 60,000 litre tank (again all home-made). This is the water that allows the property to flourish, without which it may not survive. The land adjacent to the creek, which is still part of the property, is separated from the farm by a fence (see photo of Tony below looking out wistfully towards the creek). It can’t be used for farming but I think would make a beautiful spot for a long table and a long lunch (though quite a trek from the house). 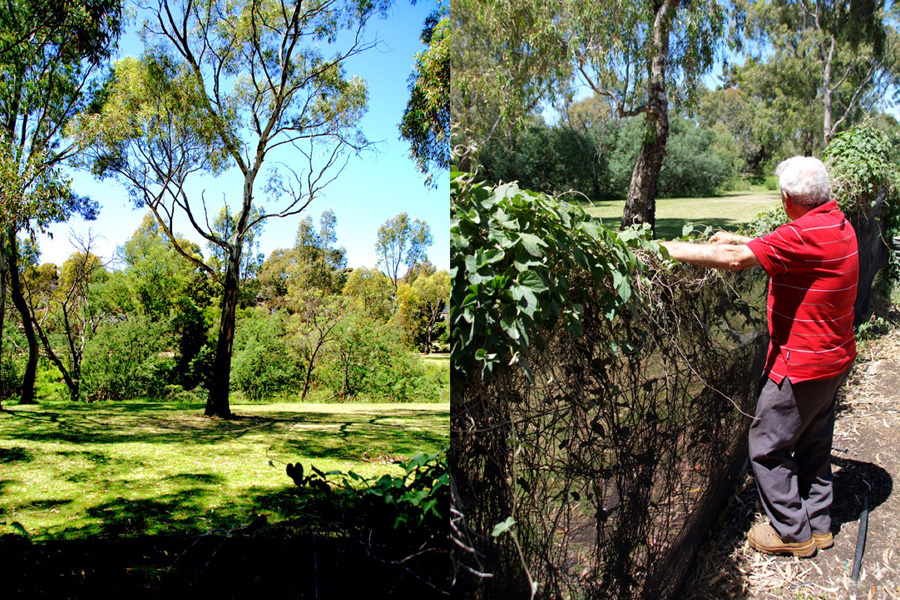 Rose Creek Estate has open days, a strong association with Stephanie Alexander and school groups dropping by to explore their suburban farm. During one of the open days they had the pizza-makers from pizzeria 400Gradi came along and make pizzas in their huge food-fired oven (that Tony made with a friend). Tony explained that the temperature in the oven reached some 600C on that day, meaning cooking time was a couple of minutes and they made hundreds of pizzas in quick succession. 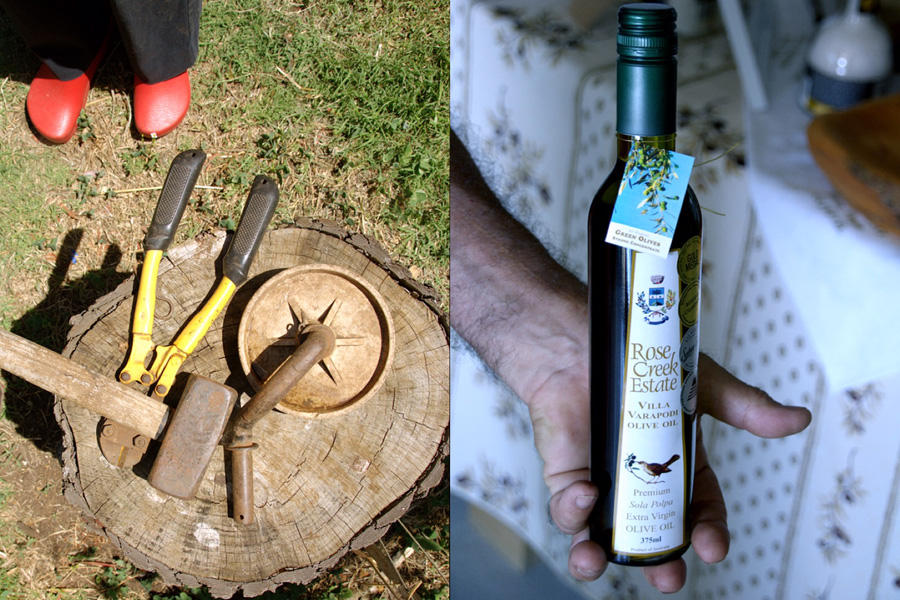 They grow several different types of grapes (Pinot Noir, Shiraz, Cabernet Sauvignon, Chardonnay, Zibibbo to name a few), which Tony and his son Angelo make into wine. But the jewel in the crown of Rose Creek Estate is their olive oil, made from the olives picked from trees which dot the property. It has been winning awards for quite a few years, most recently from the 2015 Royal Agricultural Society of Tasmania, where Rose Creek Estate won a gold, two silver, one Bronze and a Equal Champion medal. All the ribbons and medals as well as newspaper clippings are proudly displayed in the cellar door, where you can drop in for a wine and olive oil tasting (but you need to call ahead). I tried several of their wines with some bread and especially liked the 2010 Cabernet Sauvignon and the sparkling Pinot Noir Chardonnay, which was light and an ideal accompaniment to the bread, olive oil amd fresh herbs (parsley, oregano and chives) that Lina had prepared. I also tried three different harvest of olive oil, the first harvest being the strongest tasting and the most prized (though my favourite was the lighter 3rd harvest).

Lina and Tony have invited me back to Rose Creek Estate in early autumn, at the time of vendemmia when the grapes are hand-picked. I can’t wait to see them again and be part of the picking-team. It makes me think of my father, his deep desire to have a large propoerty such as the beautiful suburban farm that Tony and Lina run and how much he would have loved what they have created. I spoke to them about him and how much I wished I could have shown him my photos. 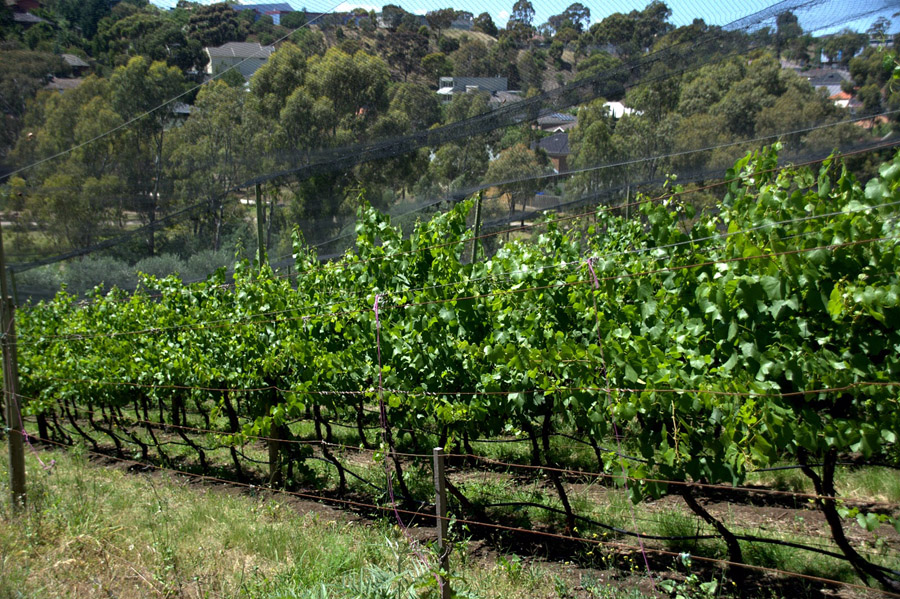 If you want to meet Tony and try out some of Rose Creek Estate’s wine and award winning olive oil, you can find him at these monthly Melbourne Farmer’s Markets:
2nd Saturday – Collingwood Children’s Farm
3rd Saturday – Gasworks Farmers Market
4th Saturday – The Slow Food Farmers Market- The Abbotsford Convent

And if you want to check out The Makers, the new book by Rita Erlich which tells the story of immigrants, food making and food traditions in Melbourne, you can find more information at the Home make it website. They also stocks a huge list of do-it-yourself foodie equipment (like cheese making kits, olive oil making kits). You might not own a property like Lina and Tony do, but you can enjoy making a whole range of food products at home and experience the joy of knowing exactly what went into your food.