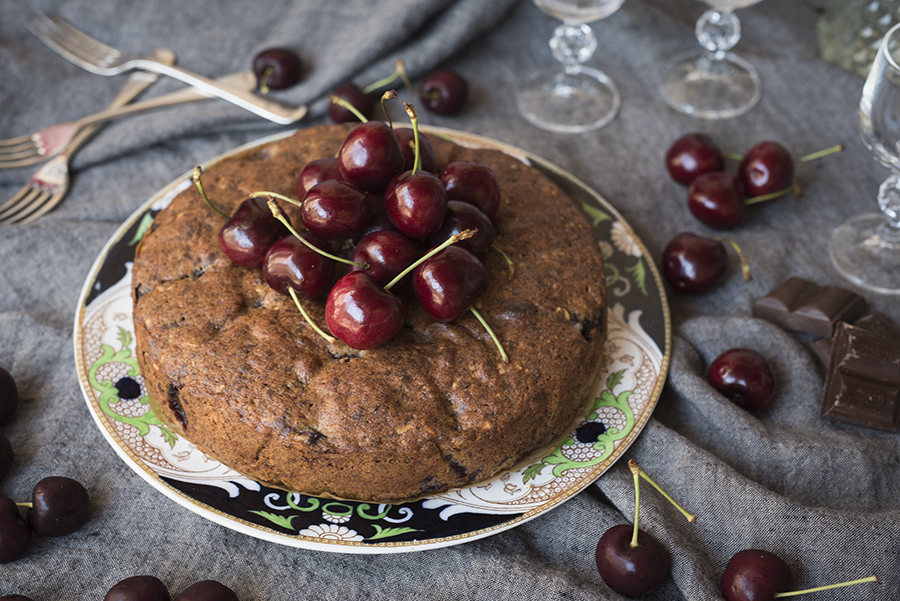 Summer is in full swing in Australia and this year there is a bumper fruit crop. Mangoes, apricots, peaches, cherries and now with plums starting to come in, I am eating my weight in fruit (which nicely balances the winter months when the closest I get to fruit is an apple strudel and a slice of orange in a Negroni). One of the nicest ways to eat really fresh fruit is to go fruit picking. Mamma tells me stories about her memories of her uncle who lived in Navolè in the Veneto region of Italy, not too far from the town where she was born. During summer he grew cantelopes, watermelons, apricots, cherries, plums and more. He would sell it to passers by from his home and would guard the watermelons at night, lest anyone came by and was tempted to steal one. Mamma and her sister Clara used to visit during summer and help pick fruit (and eat rather a lot of it). One summer both mamma and Clara put on quite a bit of weight, photos of them taken in the summer of 1944 show two pretty but rather round-faced stout girls with tight frocks. When they were fruit picking for their uncle, not much of what they picked ended up on the trestle table for sale. Fruit is very good for you of course but is also full of sugar. One of the tales from this time is that the sisters ate a watermelon in one sitting, which may not sound like much but apparently it had weighed 18 kilos! 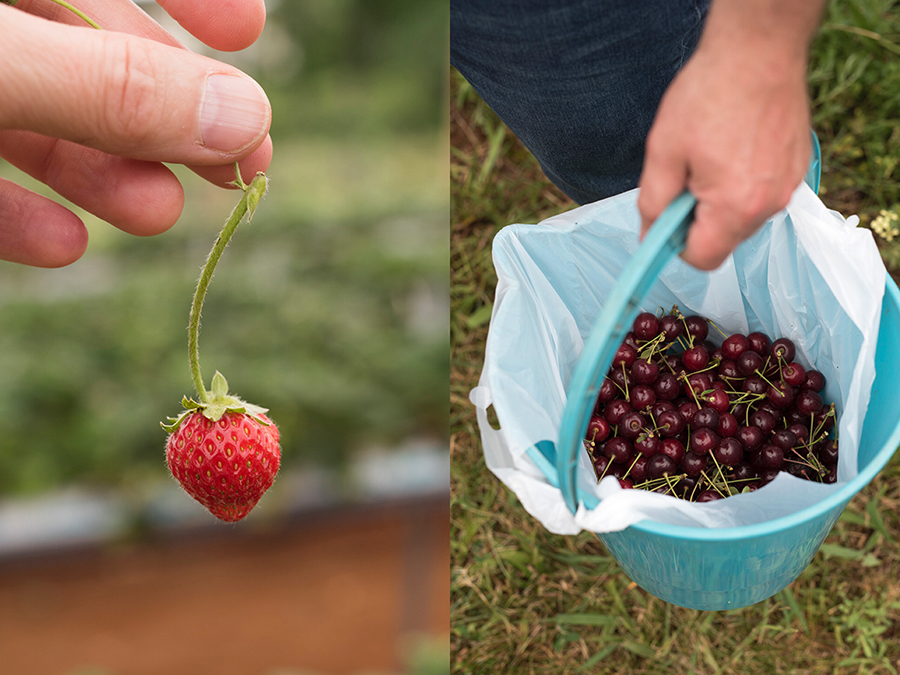 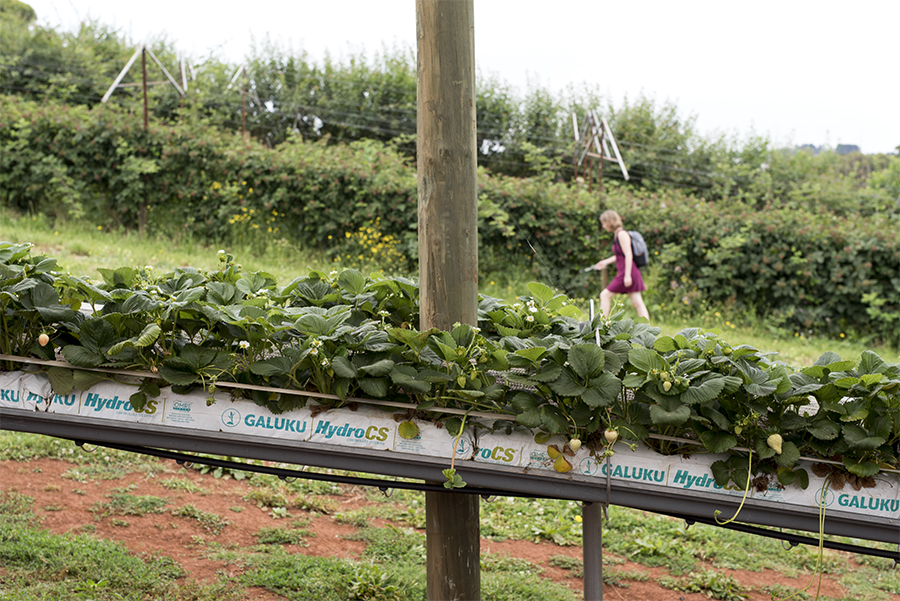 Fruit picking is clearly in my genes and last weekend I jumped at the opportunity to go cherry picking at Blue Hills Berries and Cherries at Silvan in the Dandenong Ranges, an hour from home to pick cherries. The week between Christmas and New Year is the busiest time for cherry picking, and after the hot spell it was a cool day with the slightest hint of rain; a perfect time to harvest fruit. Blue Hills Berries and Cherries (as you can guess from their name), not only has cherries, both the regular kind and sour Morello cherries, but also raspberries, blackberries, strawberries, young berries and more. The entry fee to the farm (over two locations – cherries on one property and the other fruits on the second property, just down the road) includes fruit picking, all the fruit you can eat and then you can fill a bucket with what you pick and then pay for it on the way out (some of the fruit you pick is included in the ticket price).

Tracey Chapman, who runs the family business, greeted us when we arrived at the Blue Hills and directed us to the corners of the property where the fruit was plentiful. The blackberries had been damaged by the recent heatwave and the strawberries were having a bit of a break (which apparently they do), but there were plenty of raspberries, cherries and the sour cherries had also just come in. I remember picking cherries many years ago in Red Hill and having to climb a ladder to reach the sweet ripe fruit in the upper branches. These days the trees are pruned so that you no longer have to go up a ladder (much safer too) and it helps being as tall as I am as I could reach the fruit that most others could not. 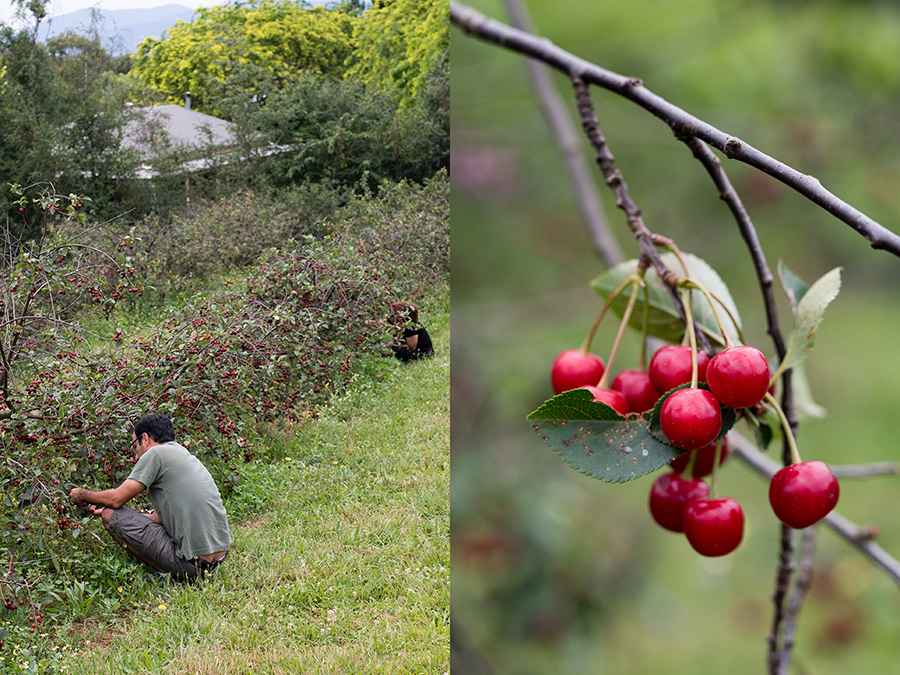 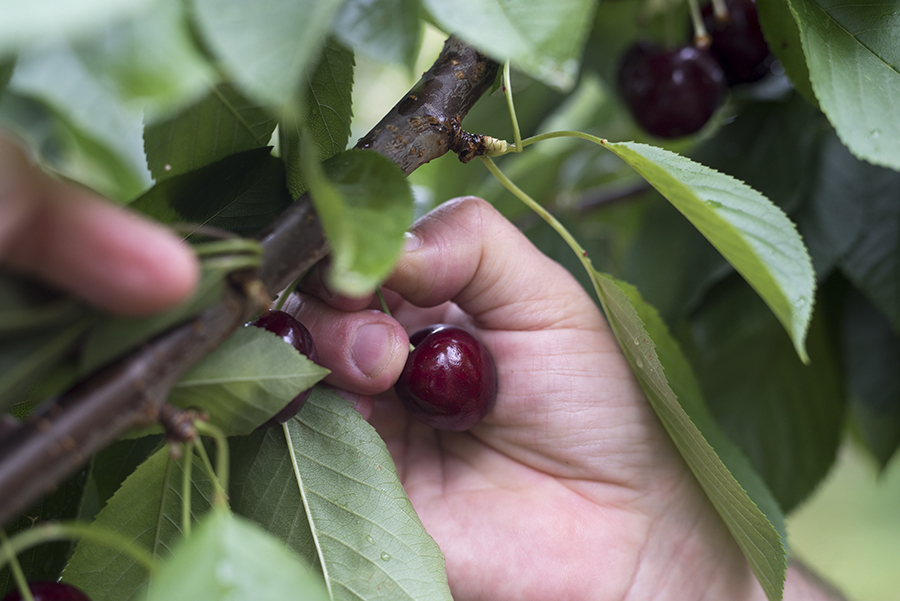 In addition to eating tons of cherries and berries over the weekend (not quite 18kg worth though), I also made a few treats: a crostata with blackberries, cherry ripple ice-cream and a chocolate cherry cake. And I still have not decided what to do with the sour cherries, though I will most likely be using them in recipe testing for my next cookbook (that I have been researching for a few months).

The chocolate cherry cake is heavily influenced by a pistachio, chocolate and pear cake. To really bring out the taste of the cherries, I poured cherry syrup (a product of the ice cream…) over the slices of cake at the time of serving, purely optional but highly recommended. A bit of thick Greek yoghurt to the side adds a creamy but slightly sour balance that makes it dinner-party worthy.

The ice cream is a vanilla bean one with a custard based, with cooked cherries swirled through it after churning. I considered stirring through fresh cherries but thought the ice cream would be smoother if I cooked them down a bit. And the by product of this was a light cherry syrup that I reduced to a thick syrup to pour over both the chocolate cherry cake and the ice cream. A happy case of cherry overload and utterly delicious! 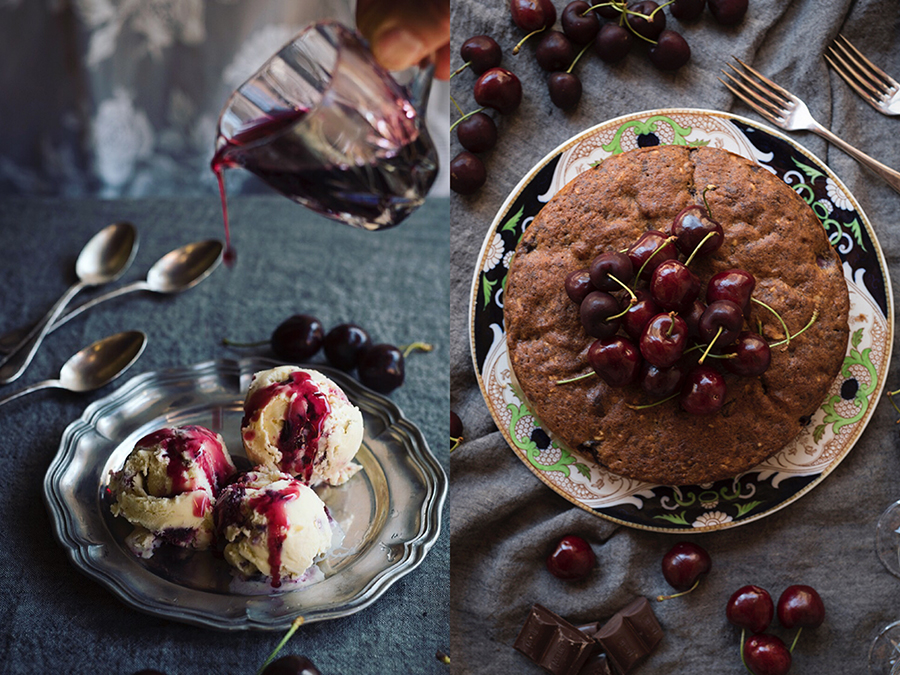 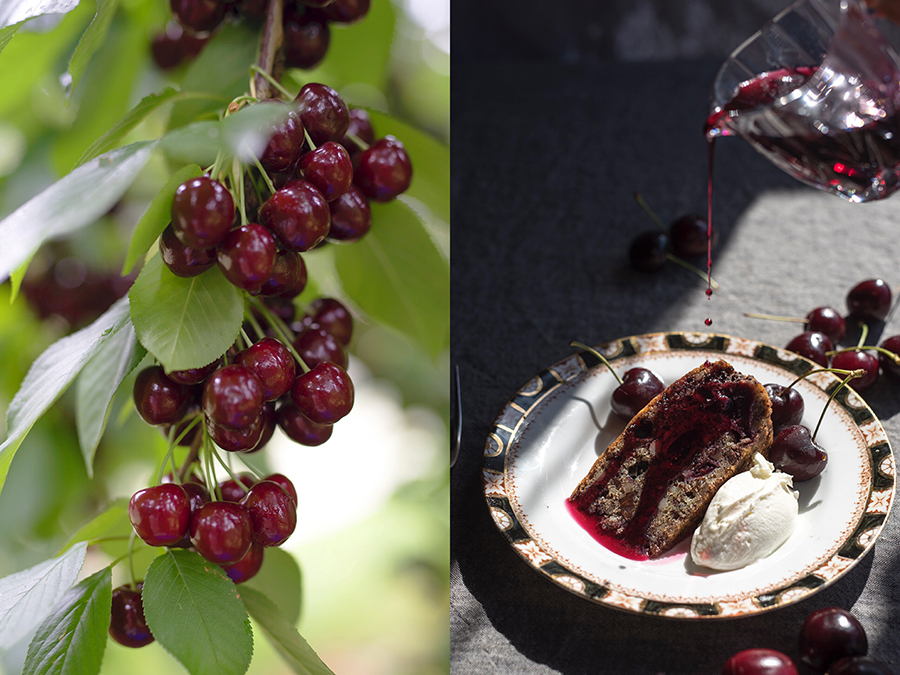 It has been lovely bringing in 2019 with such an abundance of fruit. The year promises to be a busy one with trips to Italy, researching and writing my third cookbook and cooking classes here at home in Melbourne. I have been finalising the details of my April/May trip to Italy, booking accommodation and arranging transfers. Mark will be joining me for part of it and we will travelling through the northern regions of Italy, from Torino, to Varese, Lecco, Bolzano and Tarvisio. Prior to meeting him I will be heading to southern Puglia (yay!) to run the Tour of Southern Puglia with Southern Visions Travel (which is fully booked).

Other things to look forward in 2019:
1. 2019 Culinary Tour of Trieste – the small group tour (ten people) runs from 17 – 22 September. Click here for details on the 2019 tour and here to read about the fun we had on the 2018 tour. there is nothing that I love better than showing people around my second home in the northeast corner of Italy and into the Istrian peninsula.
2. Festival 21 – I will be running a workshop called The Pleasure of Pasta at Festival 21 on 2 February. The two-day celebration of sustainability through food, culture and future is being held at the Meat Market in North Melbourne. There will be four concurrent streams of events (with some truly amazing participants and speakers) and tickets are required even though the event is free.
3. Cooking classes – I hold classes for groups of six people in my home. I have added a new class called Pasta Sauces No.2 (seeing a few of you who have been to “Making Pasta Sauces” wanted to learn more sauces). the regular classes are also there – Pasta 101; Let’s make gnocchi; Italian Sweets; and Apple Strudel masterclass. Classes are booked to June but there are plenty of spots after this. I also run bespoke classes for up to six of you as a three course lunch. Get in touch with me via email (via the contact form below) if you are interested. Click here to view a list of all my cooking classes. 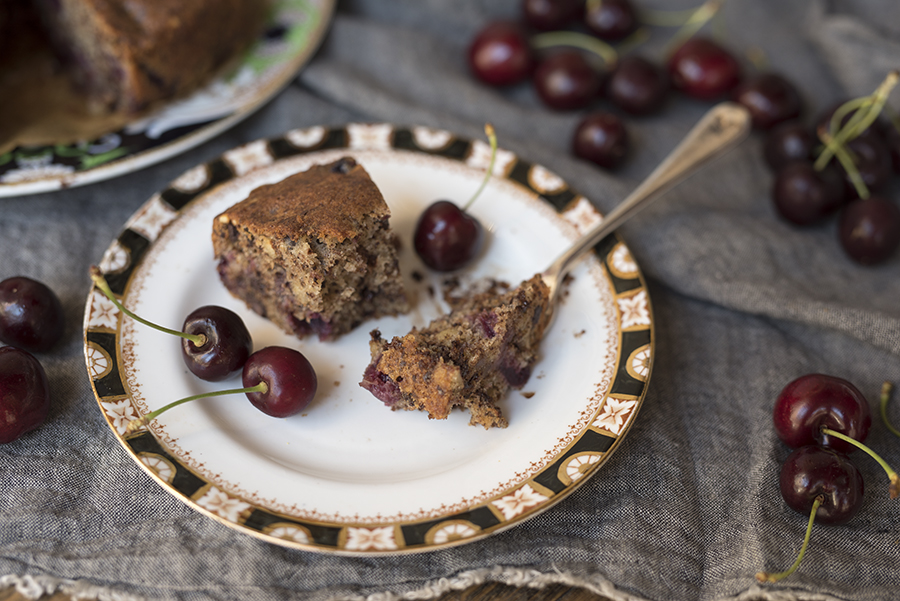 Preheat oven to 160C. Process chocolate and almonds in a food processor until coarse crumbs form, set aside. Beat butter and sugar in an electric mixer until light and fluffy. Add eggs one at a time, beating until well combined, then stir in flour, baking powder and salt. Stir through almond and chocolate mixture. Lastly add the chopped cherries. Pour into a 22cm-diameter springform cake tin greased and lined with baking paper. Bake for 50 minutes or until an inserted skewer withdraws clean, cool in tin for 10 minutes, turn out and cool to room temperature on a wire rack.

Decorate with extra cherries and serve with thick yoghurt (optional) and cherry syrup (see below). The cake will keep, stored in an air tight container in the fridge, for 4 days.

Make the cherries the night before: if using fresh cherries, wash them and remove the stalk. Place in a saucepan with the raw sugar and a cup and a half of water. Bring to the boil, then reduce the heat and cook for about 5 minutes or until the cherries soften. Allow the liquid to cool and then squeeze gently on each cherry to remove the pip (again, only if using fresh cherries). Discard the pip. Set the liquid aside for later. Chop the cooked cherries in half and then put them in the fridge overnight.

To make the ice cream, warm the milk, half the cream, sugar, vanilla seeds, the vanilla pod plus the salt in a medium saucepan and bring to just below boiling to allow the sugar to dissolve. Remove from the heat, cover and allow the vanilla to infuse for 30 minutes then remove the bean.

Place the remaining cream into a large bowl and set a mesh strainer on top. In a separate medium bowl, whisk the egg yolks.

Prepare an ice bath (ice cubes in a bowl in a little bit of water), and set it aside.

Reheat the milk back to just below boiling point and pour it in a thin steady stream into the prepared egg yolks, whisking all the while so the egg yolks do not cook. Scrape the lot back into the saucepan and put it back on the stovetop on medium heat, stirring the whole time. Bring to 85C or until the mixture thickens and coats the back of your wooden spoon. Remove from the heat immediately (so the eggs do not scramble) and pour the custard through the strainer (to strain out any bits of cooked egg) and stir it into the cream. Place the bowl with the custard over the ice bath. Allow the mixture to cool, stirring regularly. The mixture should feel like it has never been heated (about 30 minutes). Place it in the fridge, covered for a couple of hours.

Churn using your ice-cream machine until it is the desired consistency (ice cream-like). Place layers in your ice cream storage container, alternating with the cooked cherries you made earlier and the churned ice cream. Swirl the cherries a bit so you create a ripple effect. I like to cover the ice-cream with some baking paper (this will decrease the likelihood of ice crystals forming) prior to storing in the freezer.

To make the cherry syrup, place the reserved cherry liquid in a saucepan and bring to the boil. Reduce until it is the desired consistency (I reduced mine by about half). Store in a glass bottle in the fridge until needed (it will last a few weeks and is very nice served on top of Greek yoghurt in addition to over the Chocolate cherry cake or ice cream). 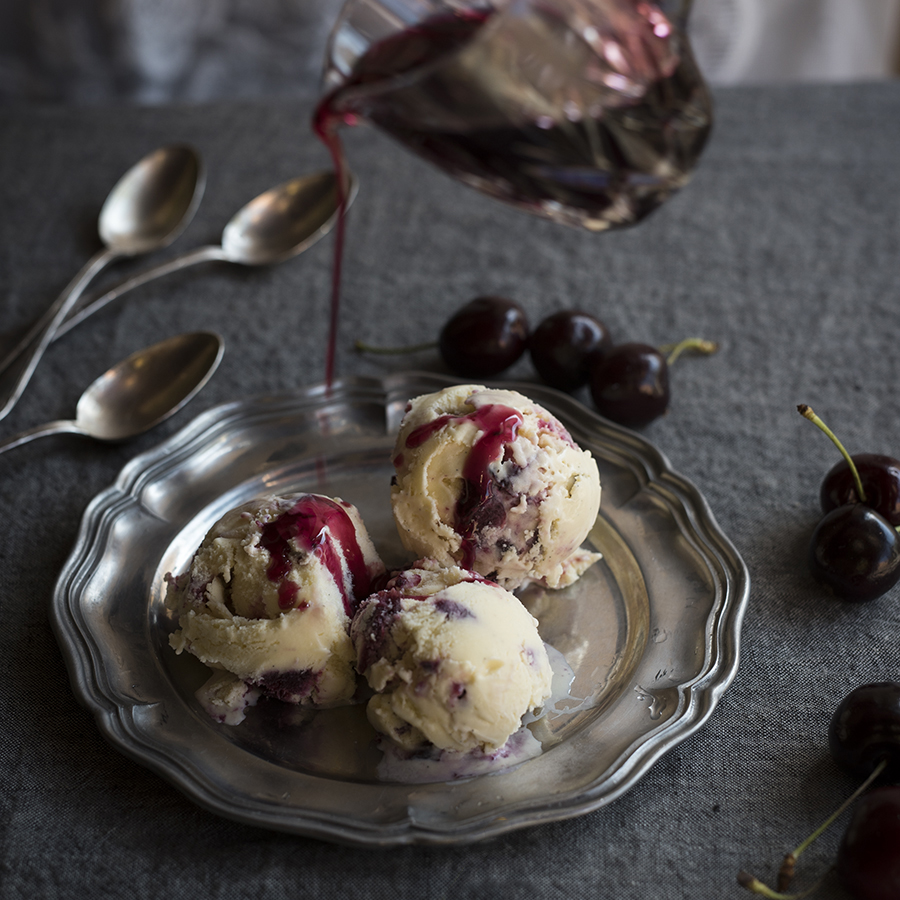