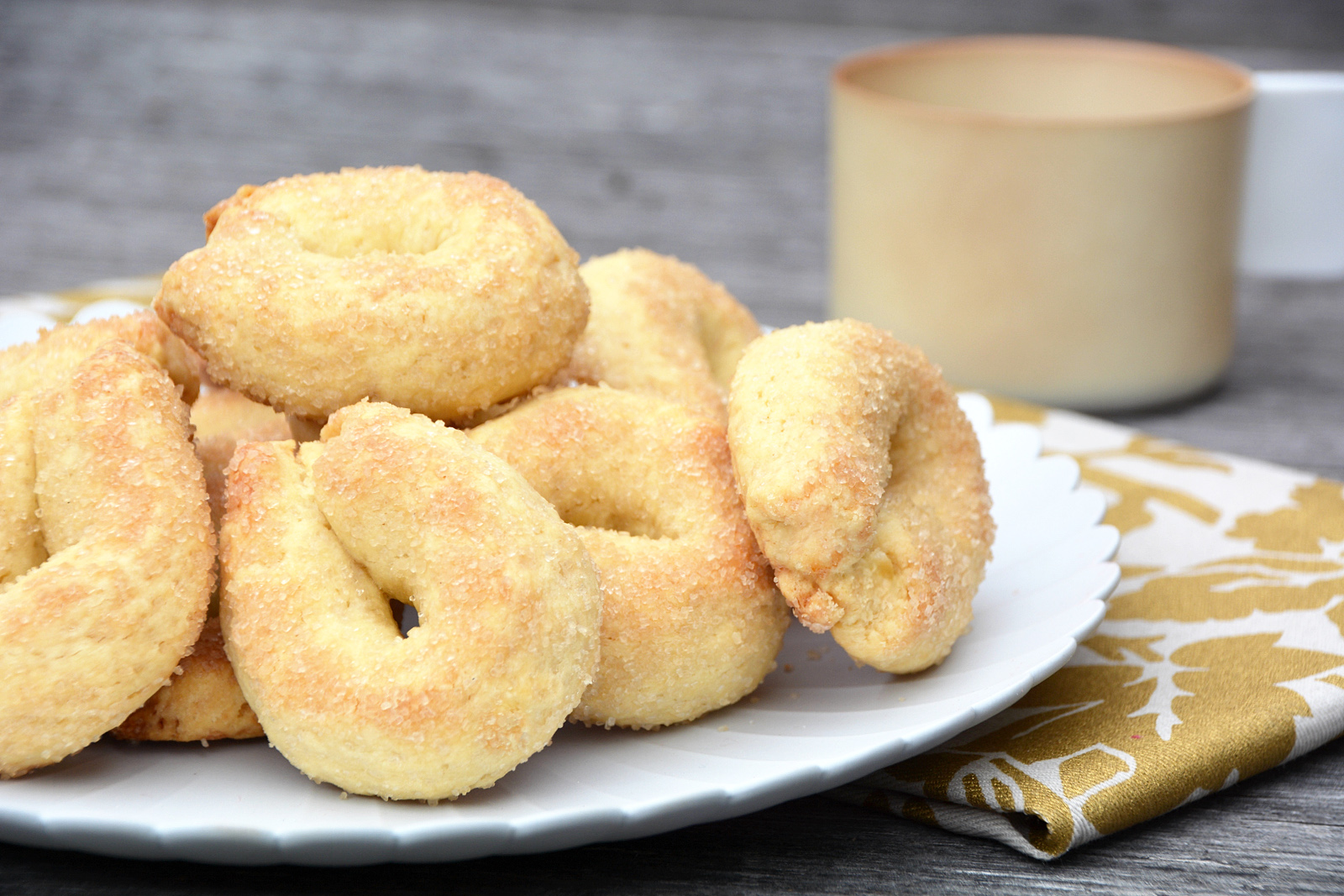 One of the things I love about Italy is the number of pasticcerie (pastry shops) there are on almost every block. It doesn’t matter if I am in Rome, Treviso or Spoleto, their heady aroma acts as a magnet, drawing me in and beckoning that I admire the scores of biscotti with names like moscardini, bocconotti, baicoli and mostaccioli in the shop window. The names are fascinating, like zaleti from Venice meaning ‘little yellow biscotti‘ because they are made with corn, or brutti ma buoni meaning ‘ugly but good’. I love that they are typical in different parts of Italy with pronounced regional differences in terms of ingredients and origins. Even the same biscotti are made a bit differently from village to village, often making it difficult to know which one is the real recipe. I don’t think it matters much, as long as they taste good! 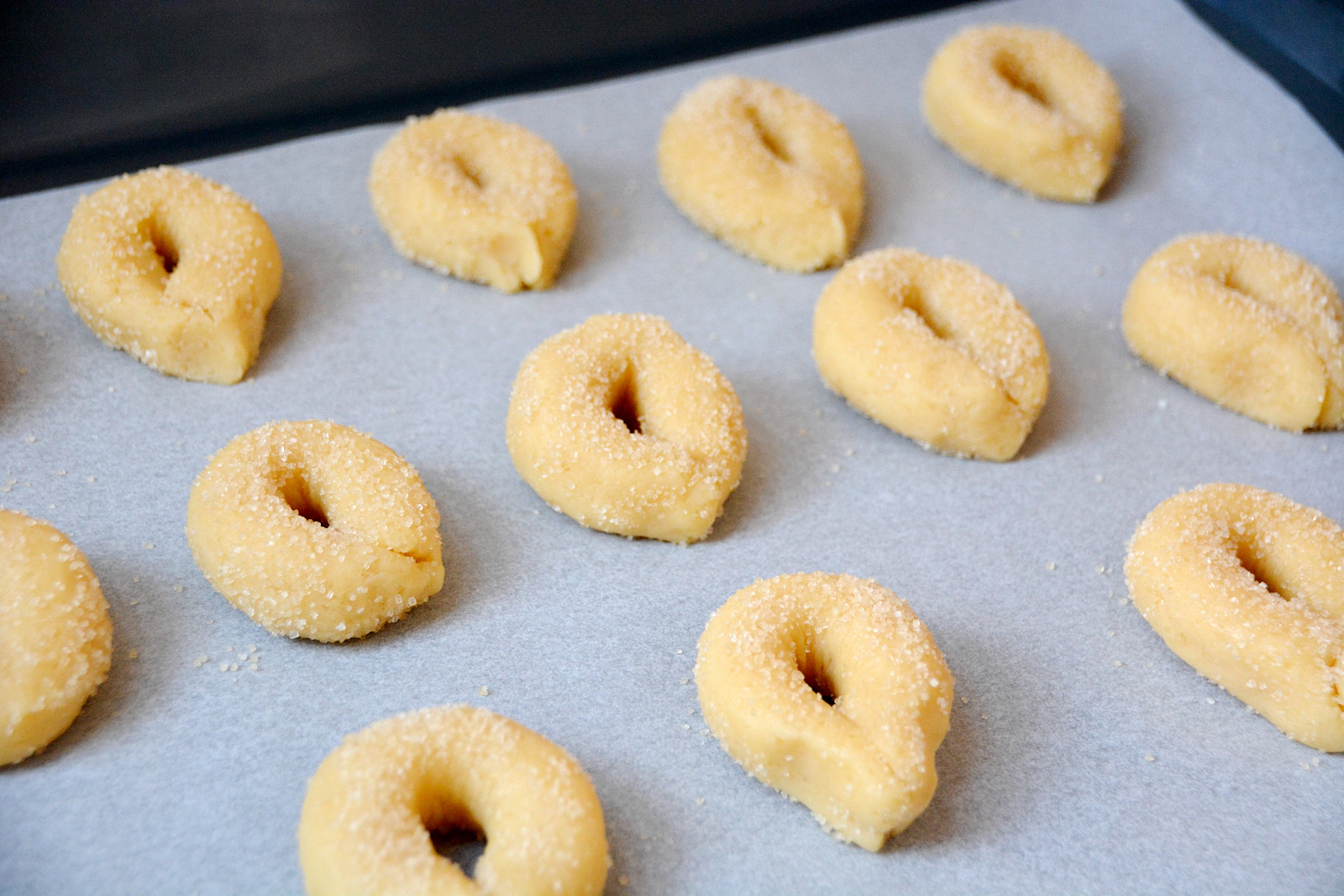 In the days of online recipes, there are countless variations for the same thing. Take torcetti as an example. These biscotti are originally from the region of Piedmont and made with yeast and ring-shaped. Tradition has it that they were cooked in the village communal oven, whilst the townsfolk were waiting for the oven to get hot enough to cook bread. I recently found a modification that uses beer in place of yeast, which fascinated me (who ever thought of adding beer?!). This means they are super fast to make as well as super nice to eat (though I gather not totally traditional). 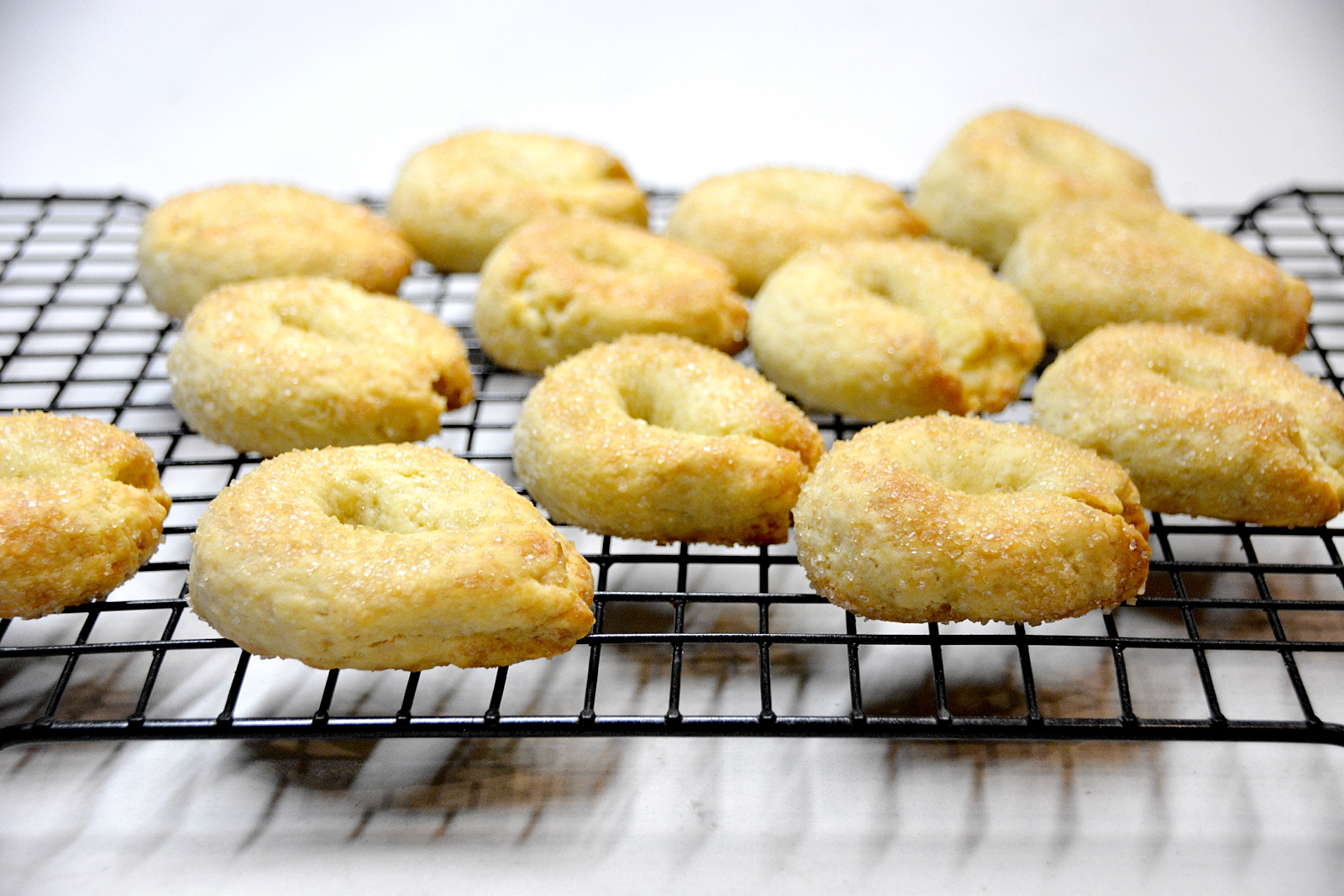 The torcetti I made don’t look that traditional either, being a plumper and smaller ring, but they are buttery, sweet and delicious. The beer even gives them a delightful slight yeasty taste. You will love them, eating one is never enough. You probably won’t find them in an Italian pasticcieria, but you will find them in my pantry! 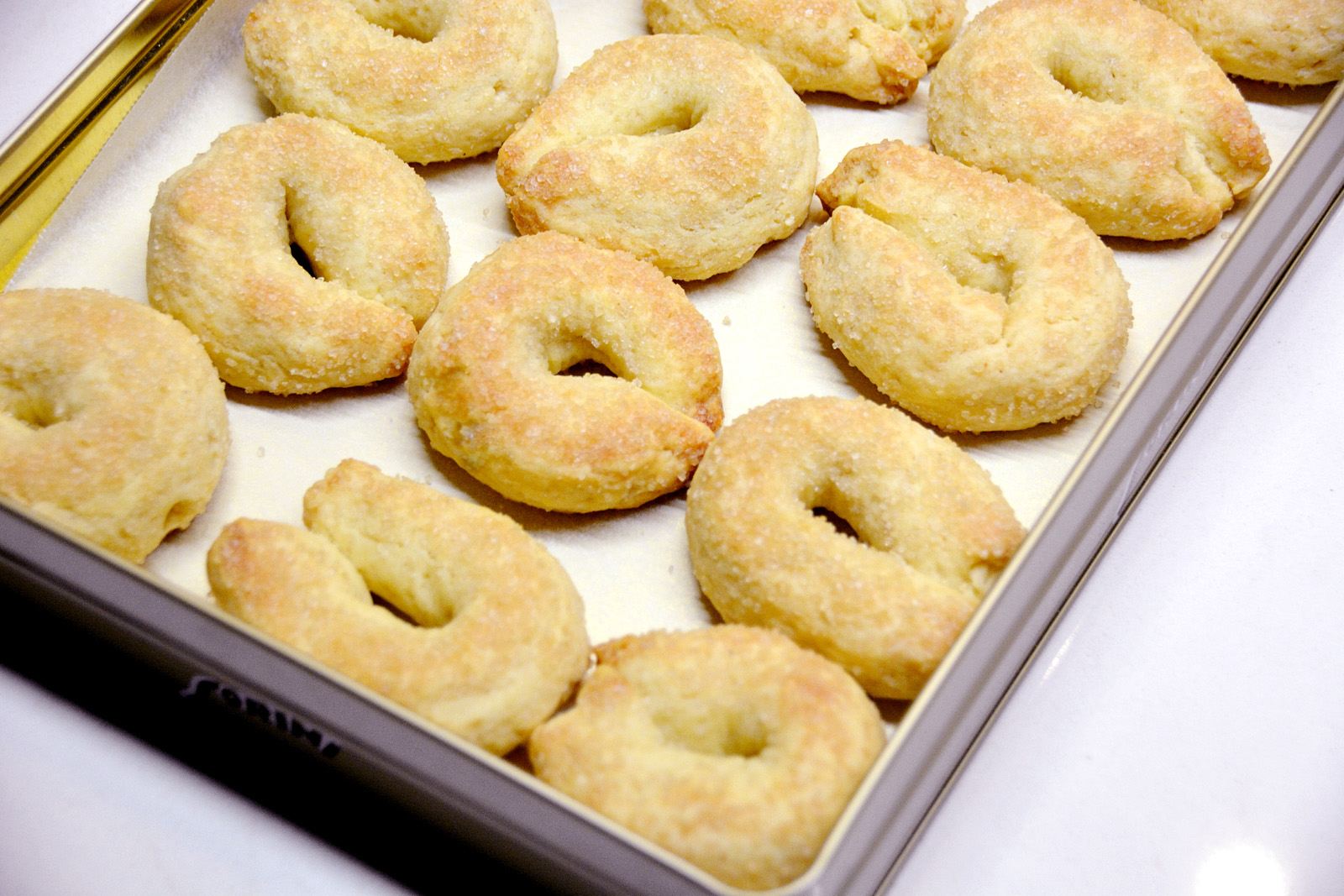 Place the butter and flour in a food processor at low speed and process until the texture resembles sand. Add the sugar and salt and process (again at slow speed) until well combined. Add the beer one tablespoon at a time until the mixture comes together, adding a few drops extra if it does not come together. Remove from the processor and wrap in cling film and place in the fridge for at least 30 minutes.

Preheat the oven to 375F/190C. Cut the dough in half, then in half again and finally into 12 equal sections. Roll the dough into ropes around 5in/12cm long and bring the ends together and press lightly. Roll in extra raw sugar and place on a lined baking tray.

Bake for 15-20 minutes until golden. Cool on a wire rack. They will keep for about 5 days in an airtight container. 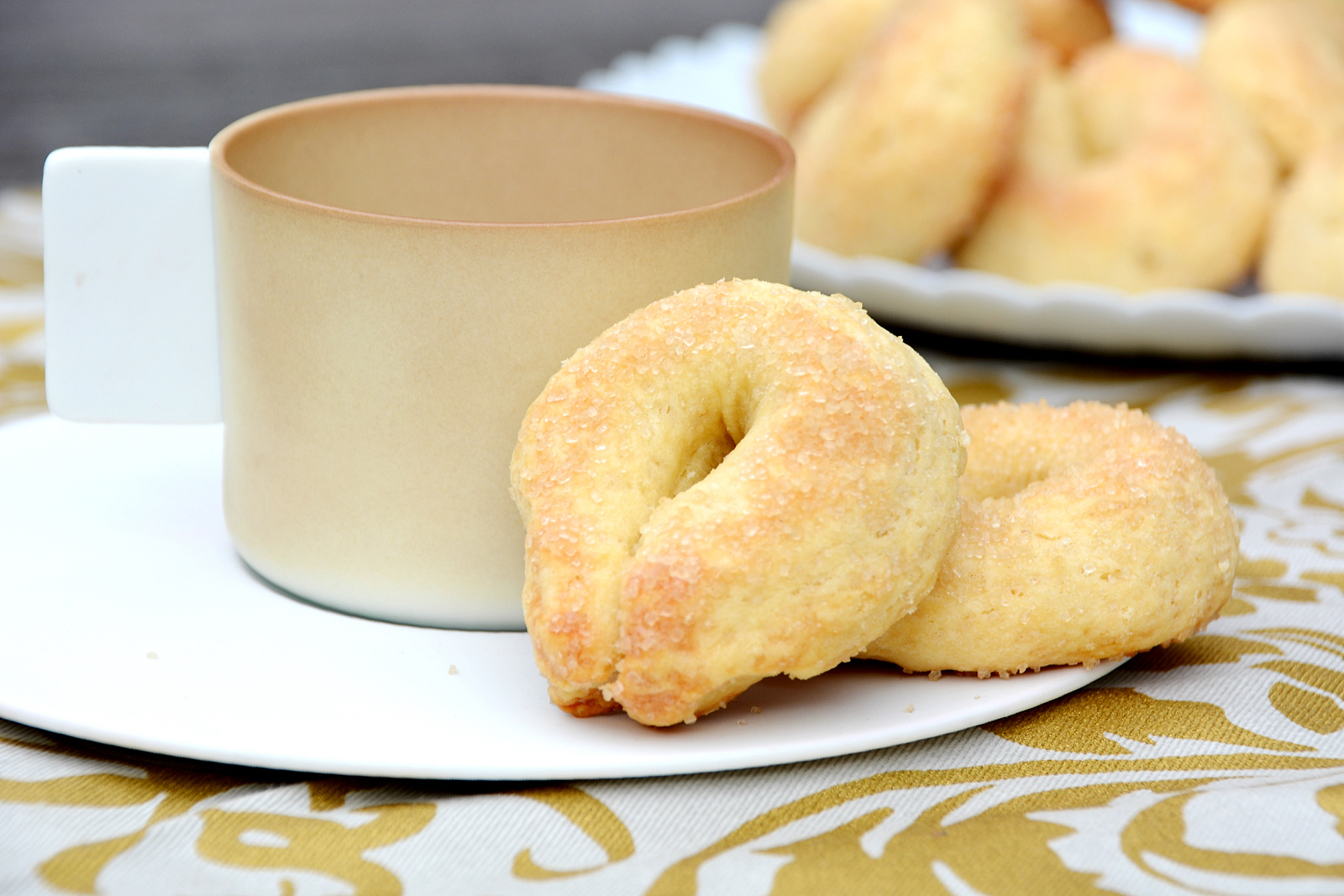 I was commissioned by Eating Italy Food Tours to write this recipe. I went on one of their tours in March 2015 around Testaccio in Rome, which included a visit to a traditional pasticcieria.