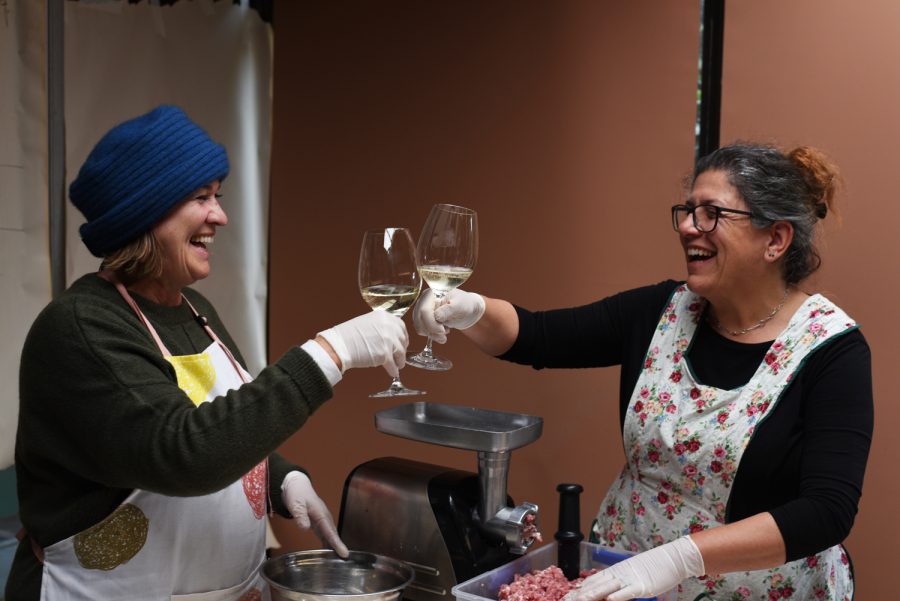 A weekend in July – salumi-making

Every July, a bunch of like-minded keen foodies head to Deb and John’s place on the outskirts of Ballarat.  The weekend involves good food, great wine and over 100kg of pork. It all started back in 2014, when Deb, Tania, Cindy and I went to the Agrarian Kitchen in Tasmania to a 2-day charcuterie course during a particularly chilly winter. We came back home, totally inspired, and keen to put what we had learned into practice. Armed with the names of several books that Rodney had recommended, we made a pledge to have our own salumi-making weekend the following year at Deb’s house in country Victoria. Then, as often happens, we sort of forgot about it during the heat of summer, and the busy-ness of life, but as winter 2015 approached, group emails started circulating and a date was arranged for July. The first year we were worried that everything we made would grow the dreaded black mould, so we used curing salt (nitrate) in everything and made about 18 different types of cured meats (ok, I might be exaggerating but there were a lot). The following year we plucked up courage to try some nitrate-free salami, and made very few products, trying to make those few very well. We were inconsistent in how much fat we removed from the lean meats, so ended up adding too much fat, used a mix that wasn’t cold enough and the sopressa was a minor disaster (tasty but too fatty). The other meats worked well though, in particular the plain salami, chorizo and the pancetta. This year we put the lessons learnt from the previous year into practice, working quickly and again expanded the number of products; it was our best salami-making weekend yet. 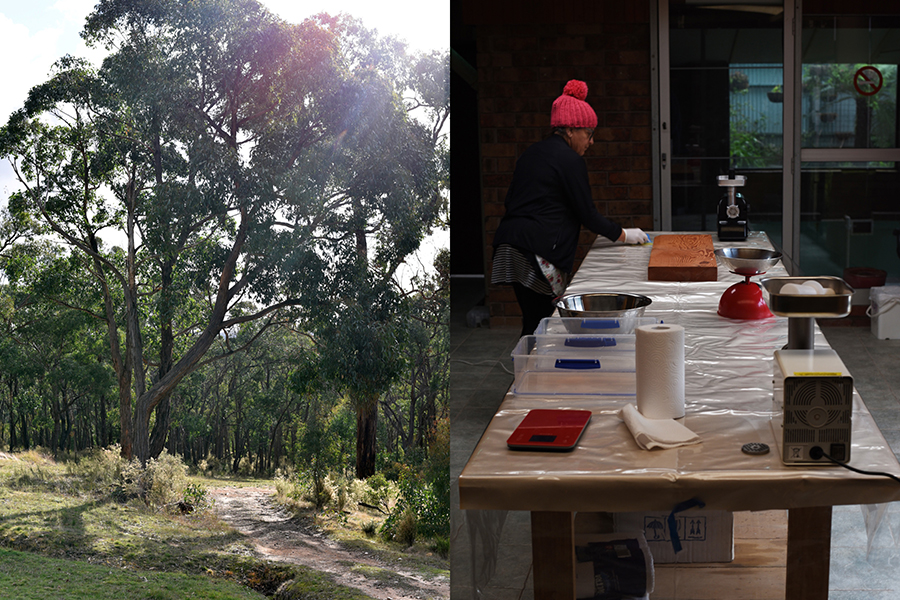 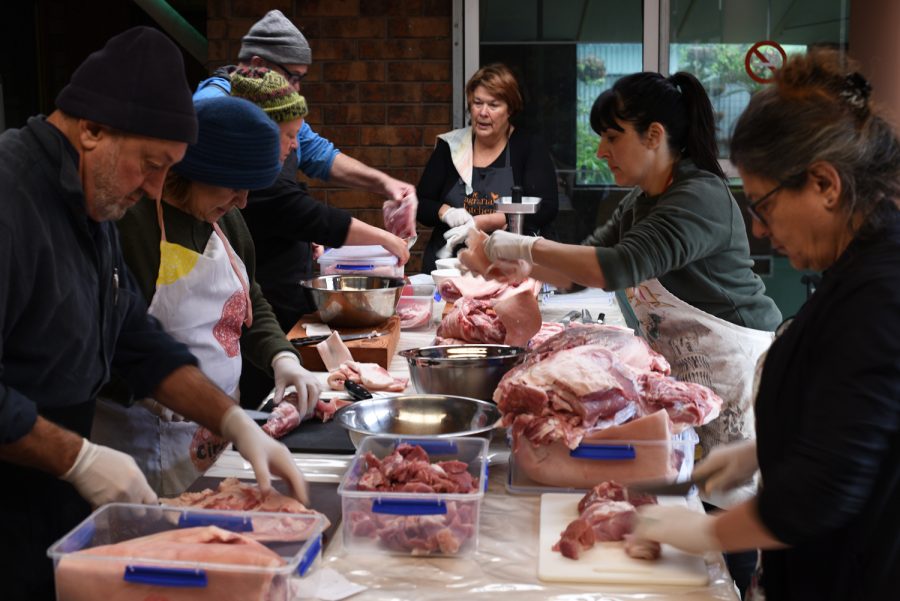 Deb has a fabulous set up at her house, with a covered annex which has been fitted out with a long purpose-built bench and a series of fridges. It is cool enough for the cured meats and warm enough for us to spend a day and a half there, albeit wearing beanies and thermals, working on the preparation needed to make the salumi. Deb ordered two smaller pigs through her local butcher, so there was 140kg of meat. There is something very special about preparing your own salumi, knowing exactly where it is from, how it is made and taking on the responsibility of using as much of the animal as possible. It is also traditional in many cultures, Italian being one of them, and I love being part of an experience that was so important for my forebears, as it provided them with all the meat they would use for the year. 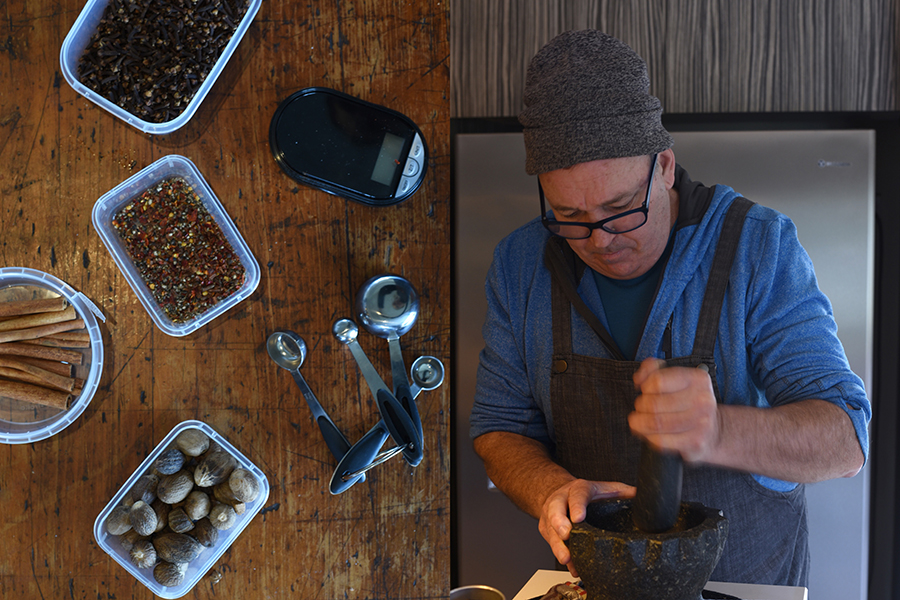 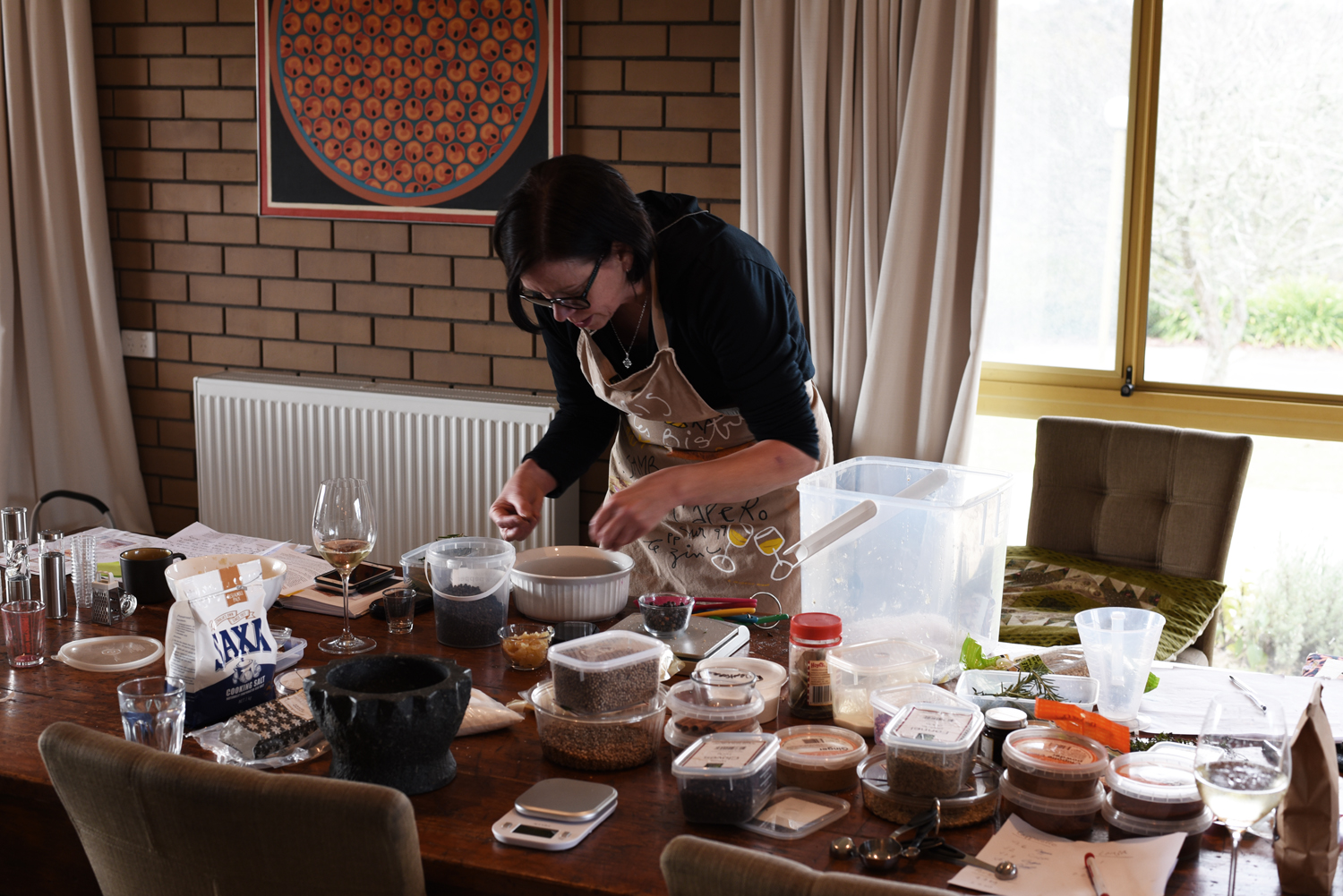 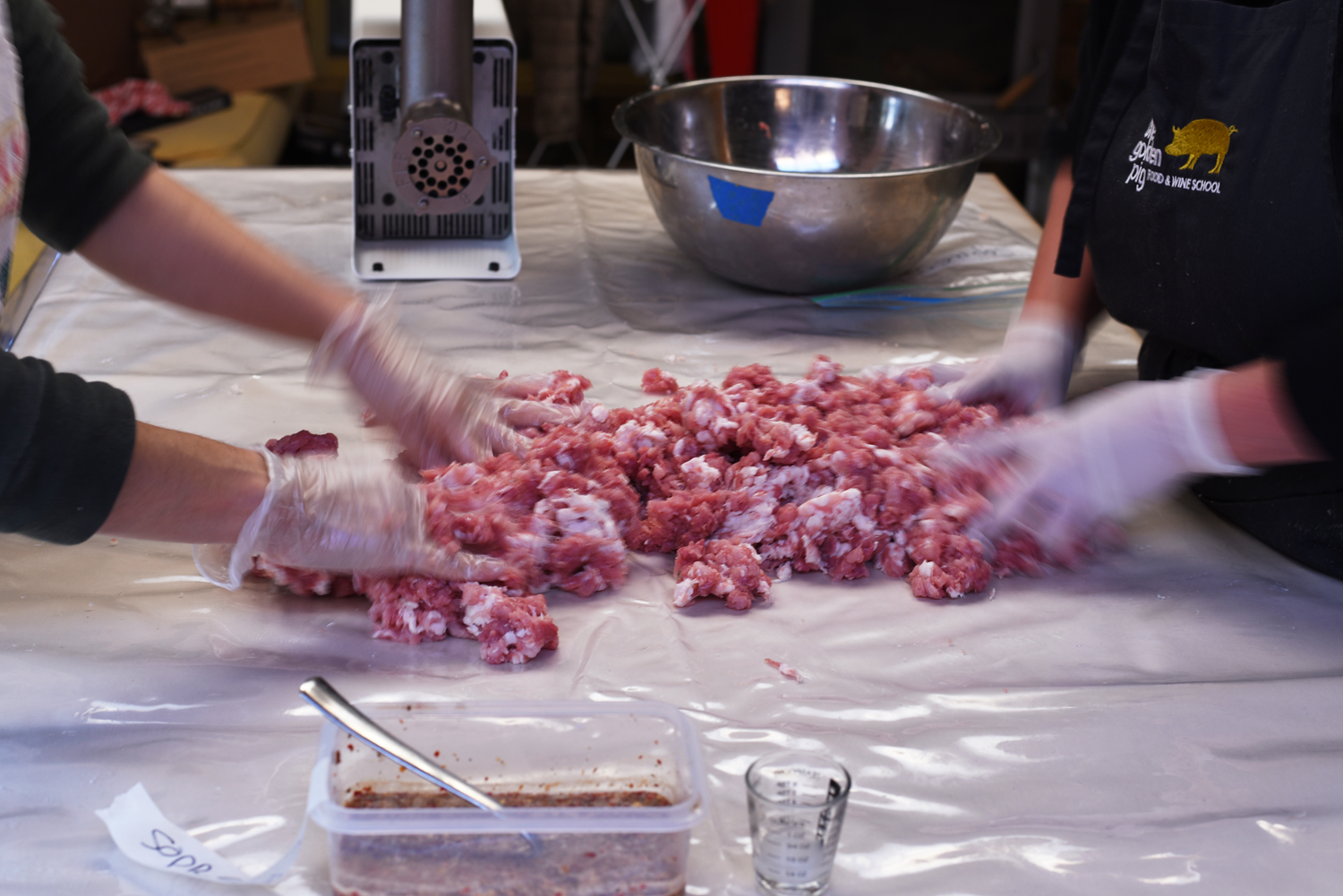 So what did we make? After dinner on Friday night, we had a round-table discussion accompanied by a selection of leftover meats from the previous year. We decided not to attempt prosciutto (which requires careful preparation and needs more love and time than the other products), but opted for pancetta (cured pork belly, flat and rolled), capocollo (cured pork neck), cured lardo (the fatty part of the belly, skin attached), lonza (lean pork loin), four types of salami (plain salami, recipe from the River Cottage; garlic-heavy Tuscan salami; spicy sopressa laced with Attilio’s red pepper hot sauce; and a Spanish sobrasada with a lot of paprika), three types of chorizo (Spanish; Morçon and the mysteriously called CC chorizo) and cotechino (which requires no curing but uses the skin, boiled down and scraped of fat). We even tried cooking down the left-over fat to make strutto (lard used for cooking), the pot merrily bubbling away on the front porch of the house. We didn’t work out what to do with the trotters, but I am sure Deb and John will put them to good use. 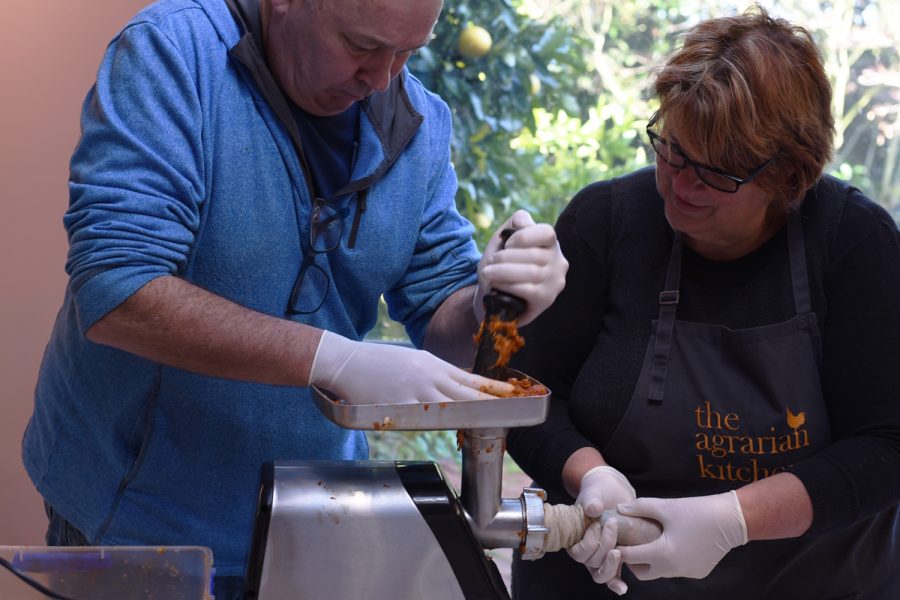 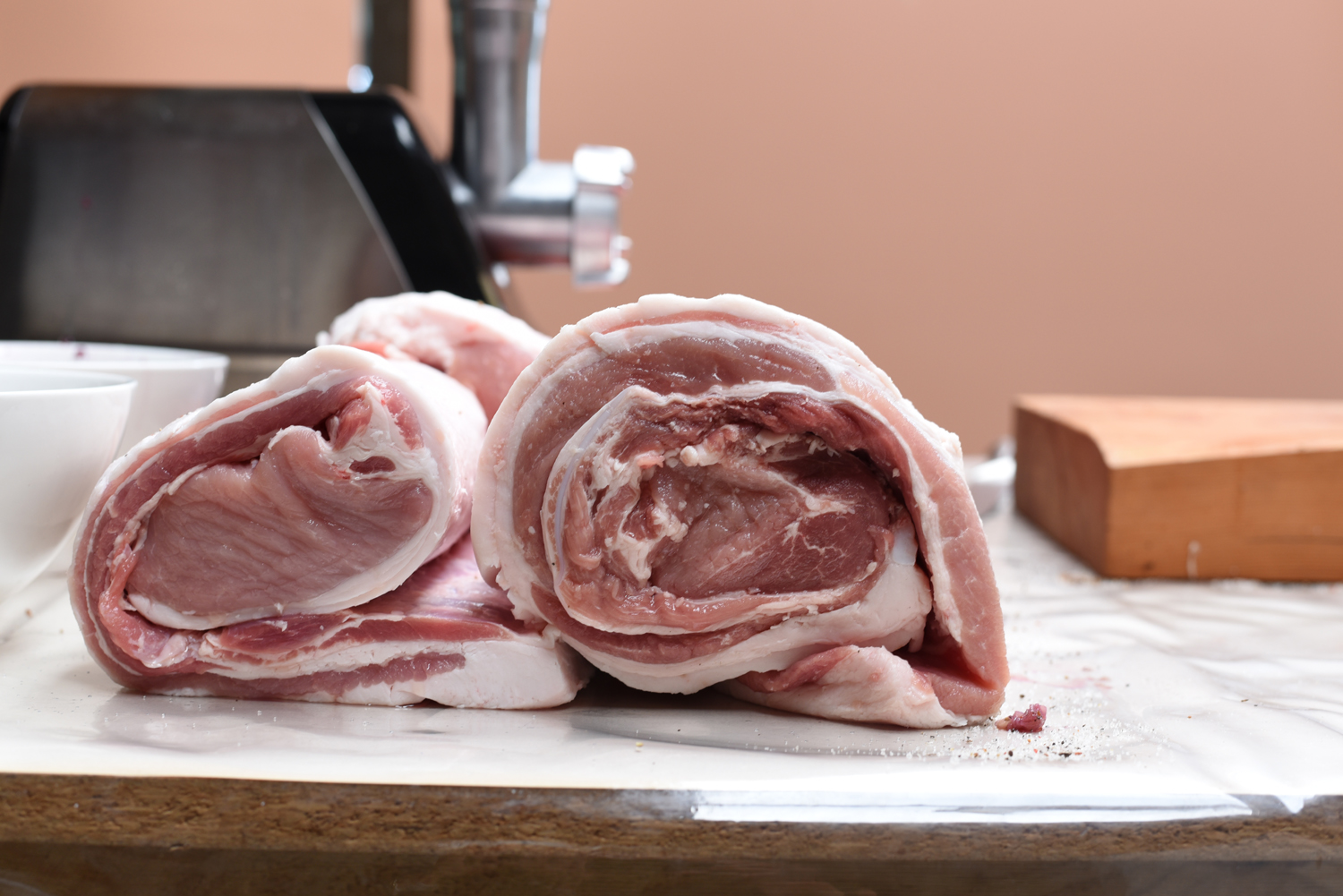 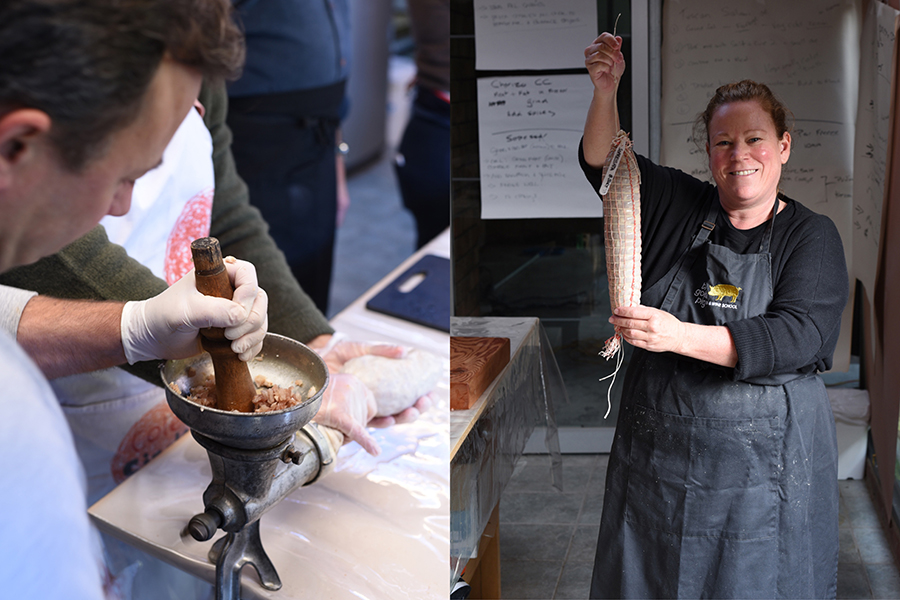 We took on various roles and tasks over the weekend, taking turns when needed: Gaylene and Michael were the spice masters; Cindy was the scout, managing to buy most Ballarat supermarkets out of salt as well as taking on the slightly gruesome task of washing out the natural casings; Roz was the master of the hand-cranked machine that belonged to her father; Barb, Sue, Tania, Gina, Mick, Ali, Mark and Deb alternated on tasks in the prep room, from chopping, sorting, mixing, stuffing to tying, labelling and hanging. And then there was the continual cleaning, washing and planning. I occasionally took photos as well as prep room tasks and during the last hour worked out the video function of my new camera, so took a few slightly wonky videos. 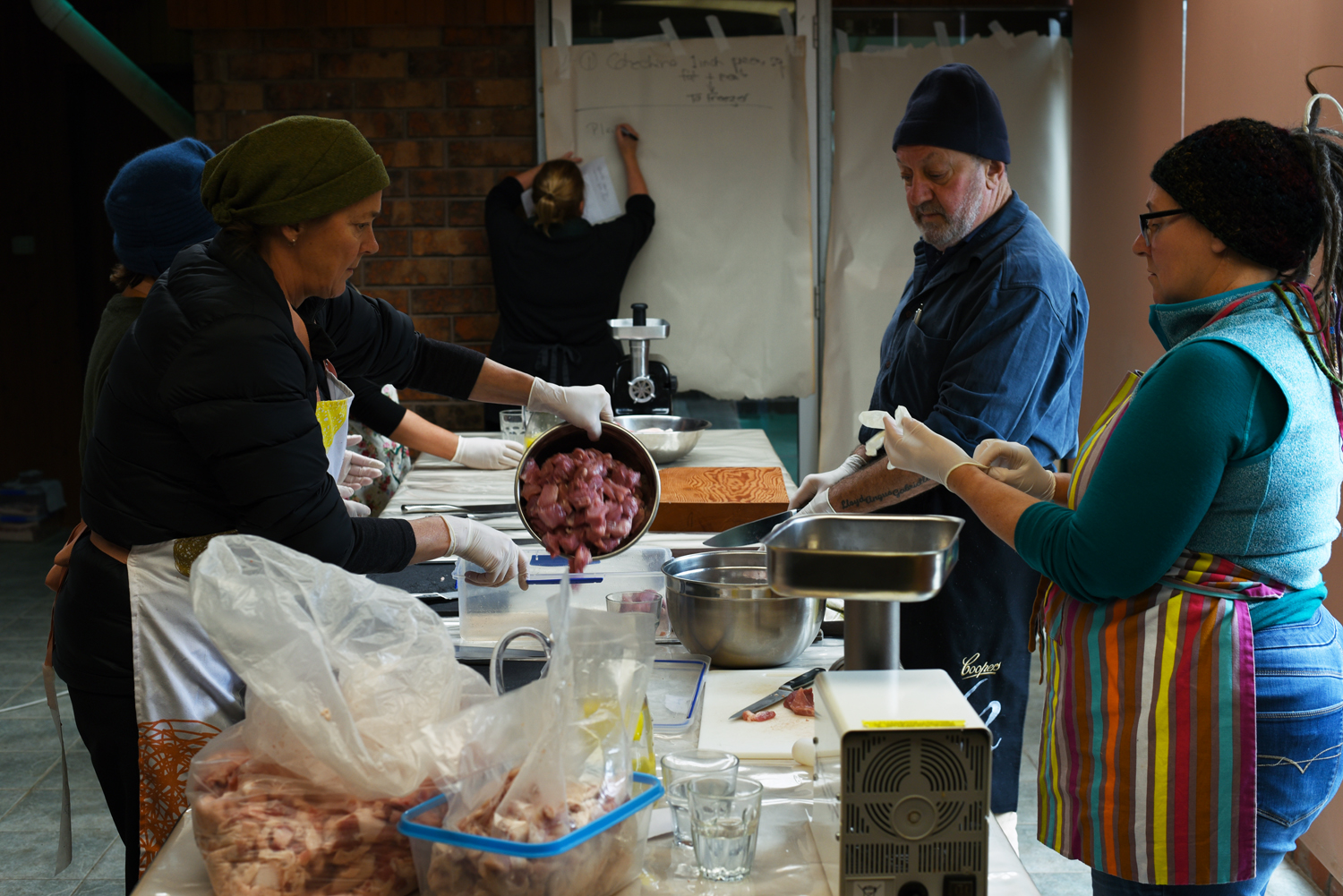 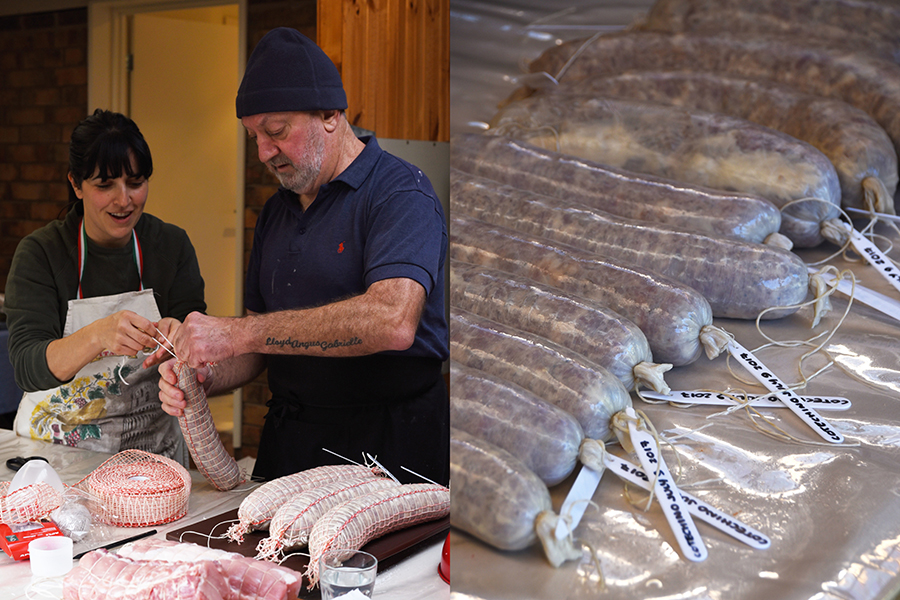 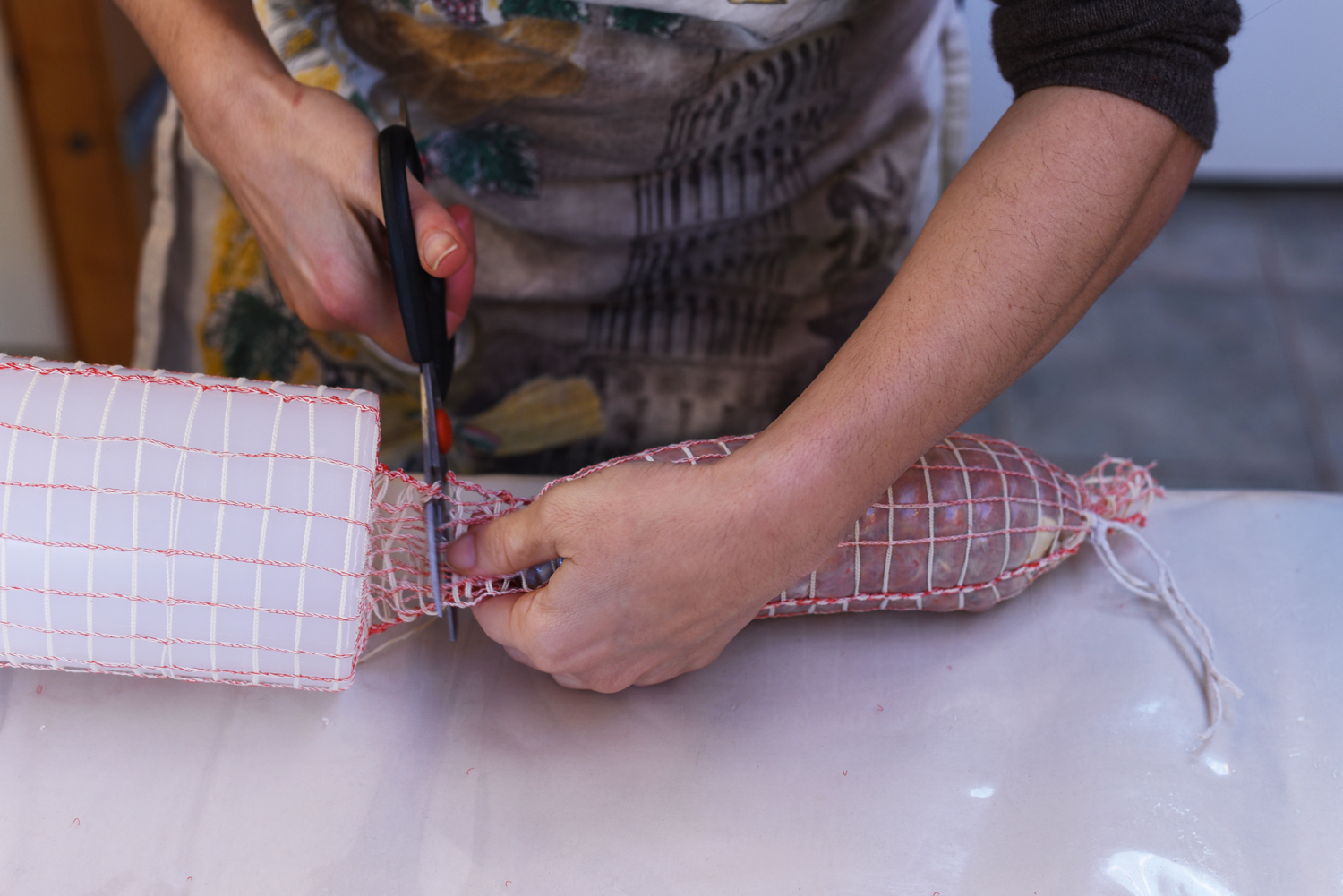 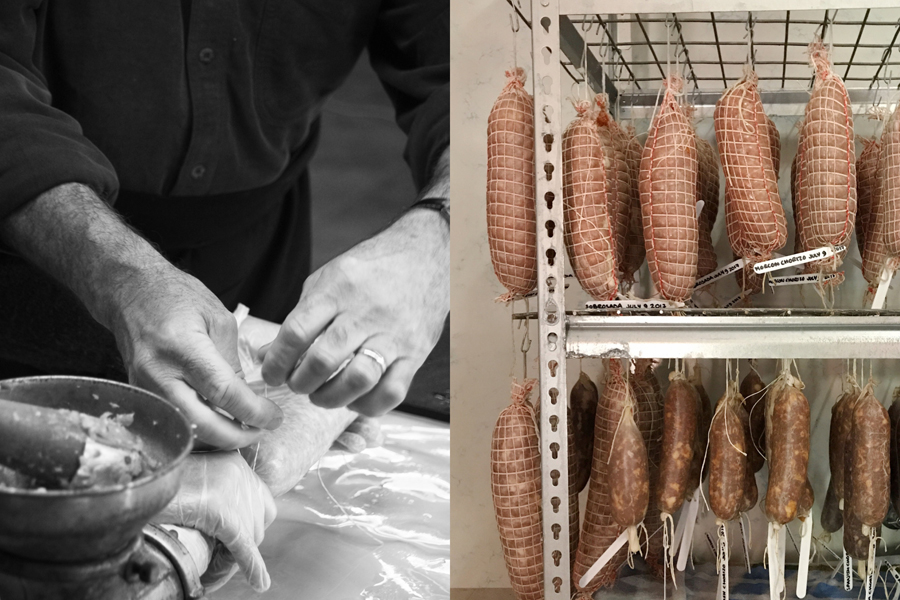 The labours of salumi-making were punctuated by meals and wine breaks, prepared by teams of participants. We managed to fit in breakfast, morning tea, lunch, aperitivo and dinner on the Saturday with Michael periodically arriving in the prep room armed with a bottle of wine (such as US pinot grigio or DOCG Prosecco) and several long stem glasses. We are building up a register of recipes we share over our “piggy” weekends – and who knows, it might become a recipe collection book in a couple of years! We also made the time to spot Deb’s chickens, that roam around the property during the day and have a quick stroll in the vegetable garden. 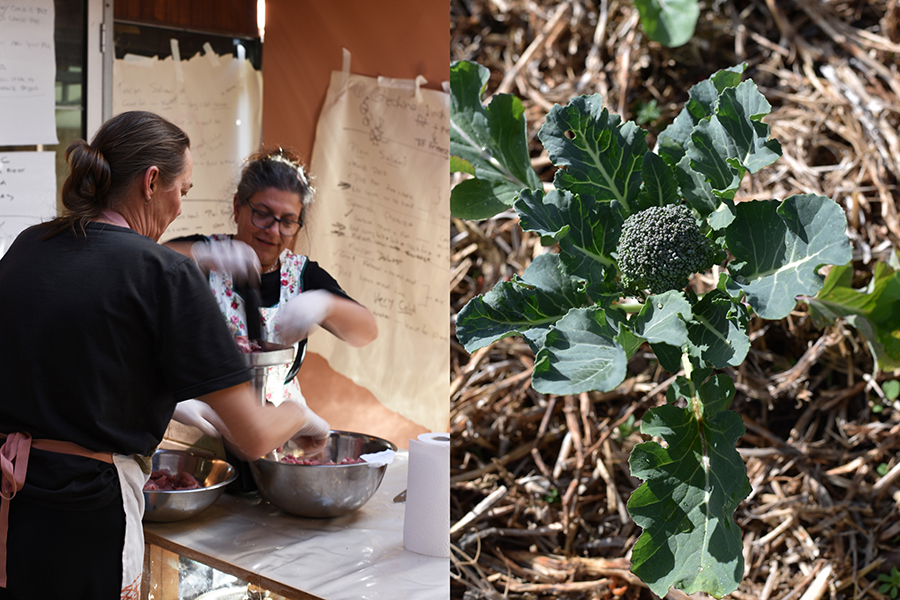 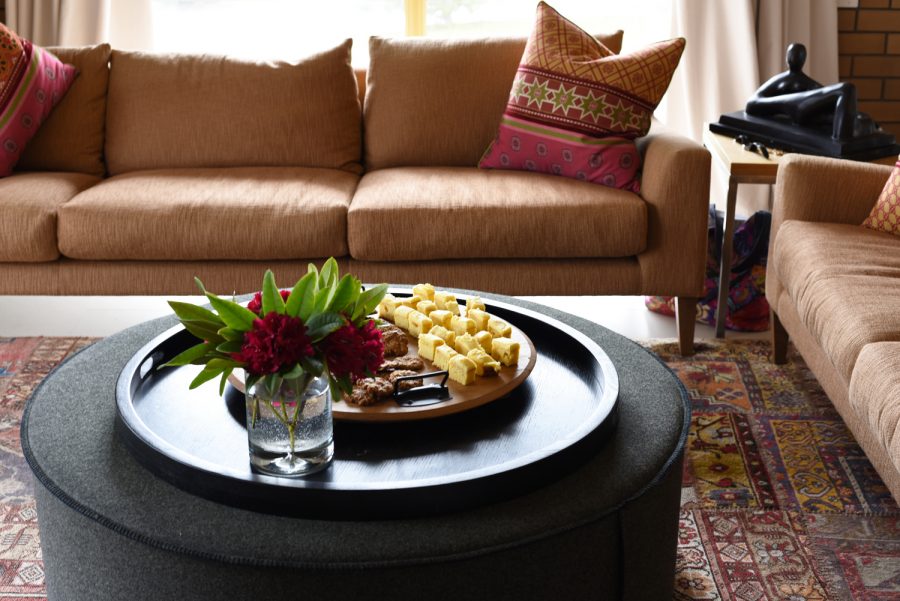 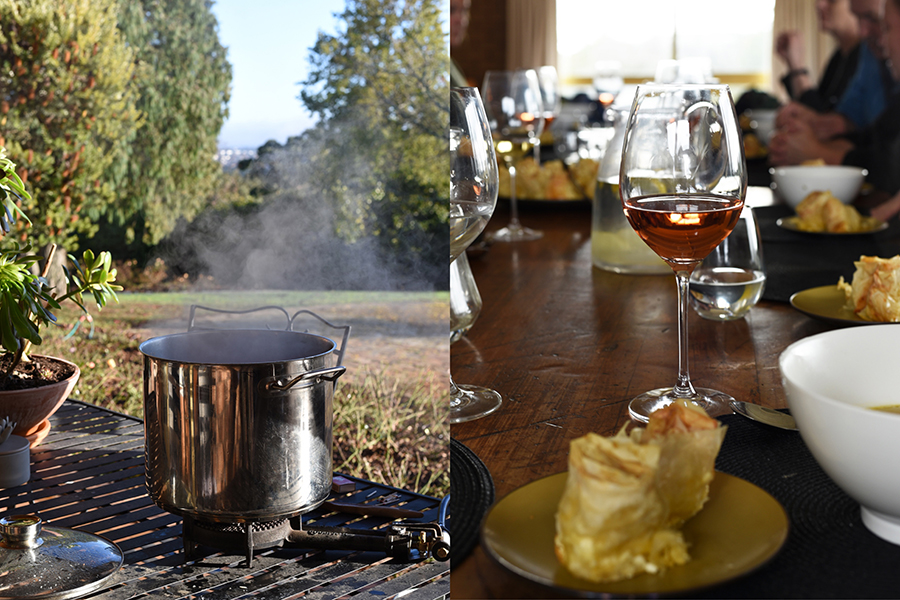 While we wait for the products from the weekend to cure under Deb and John’s watchful eyes, we will be planning our 2018 weekend in July. Gaylene ran an info session and demo on making vinegar on the Sunday which everyone loved. There was talk of Barb demonstrating cheese-making next year and of extending the weekend to fit it all in. I am rather keen on finding out about Deb’s colourful preserved fruit (which is stored in the room off the annex where our salumi will be spending the next few months). Who knows what next year will bring, but I very much look forward to spending it with this lovely bunch of generous and enthusiastic foodies. Thanks especially to our hosts for opening their doors to us every year. 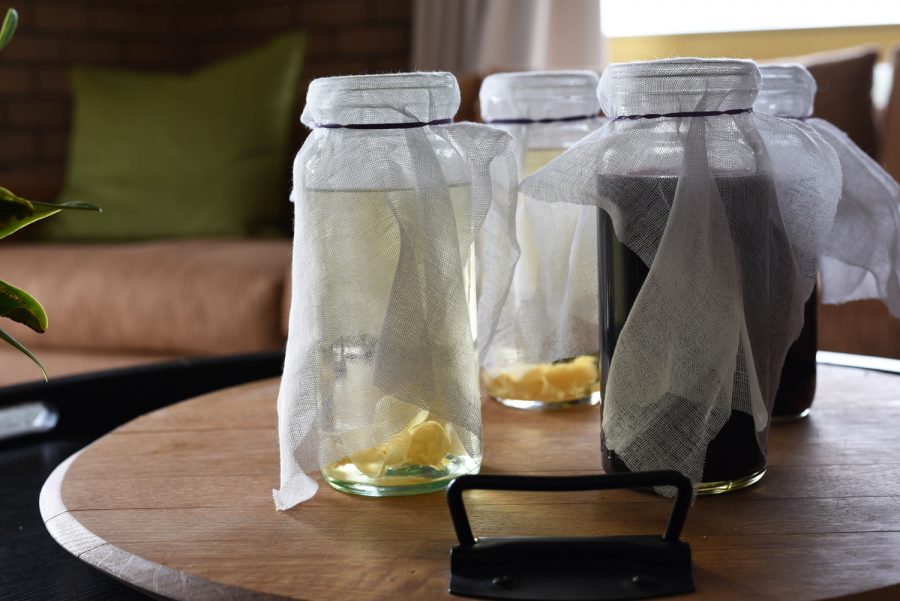 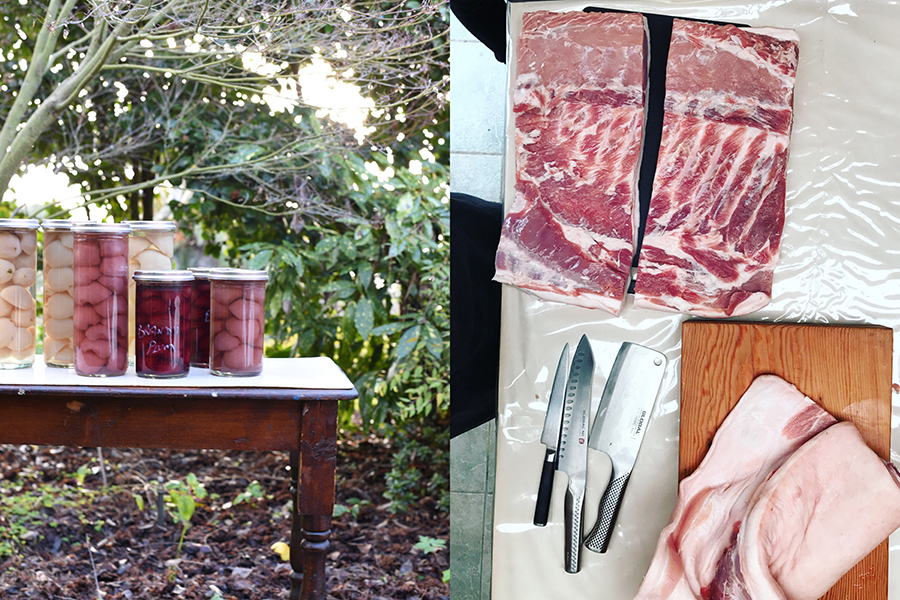 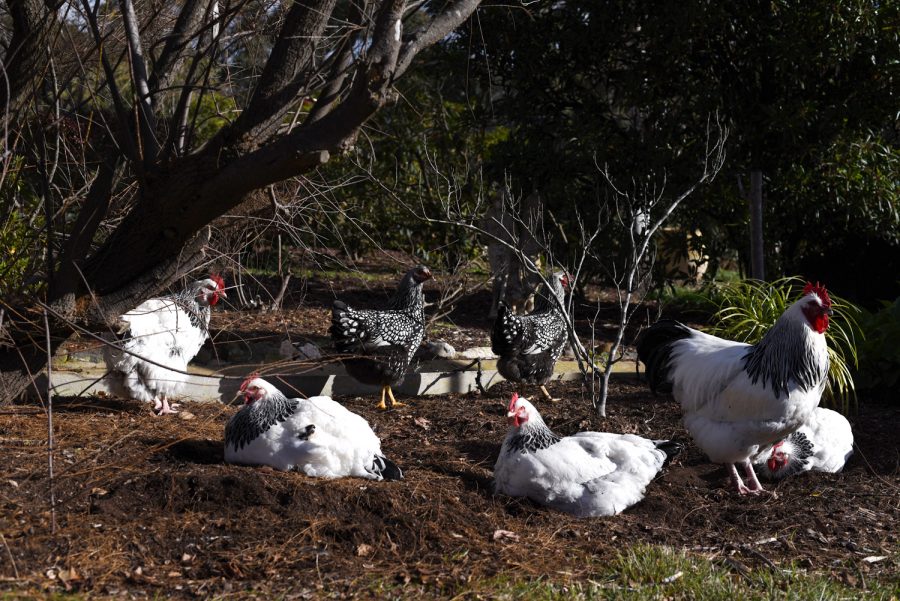