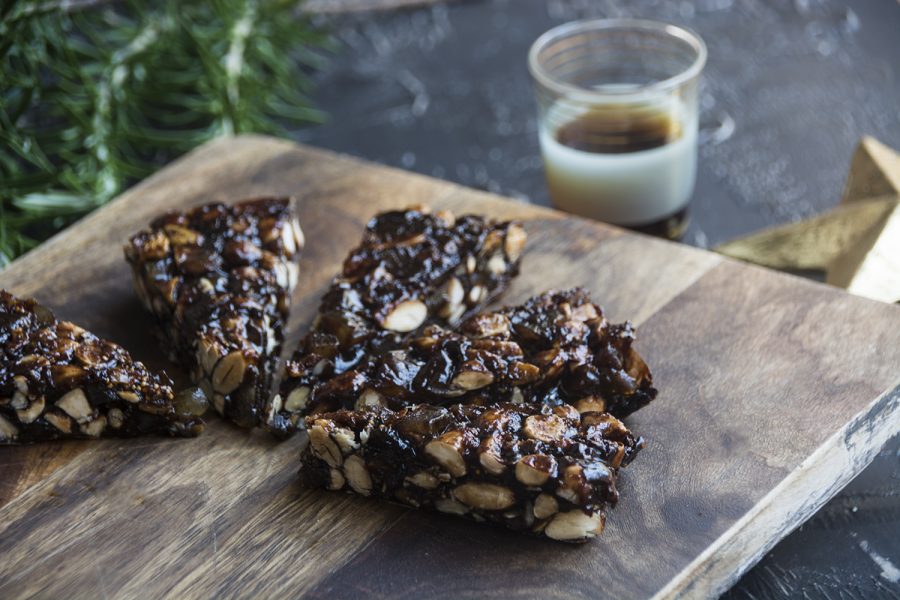 It seems like Christmas arrived early this year – maybe it is because the decorations at work went up in late November or because I am winding down my work commitments to focus on food more in 2017. But whatever the reason, I have not felt the same frantic feeling that comes when you realise that Christmas isn’t that far away at all. My Christmas presents will mainly be the edible kind, or else a copy of Italian Street Food (signed of course!).  In this, my last post before Christmas, I will be sharing a recipe for spicy fruit and nut bars – flourless and gluten free (so it will be in my daughter’s Christmas stocking) and a few photos from a party I held at home at the start of December to celebrate my book with friends who had inspired or supported me in some way whilst I was writing it (it also happened to coincide with my birthday). 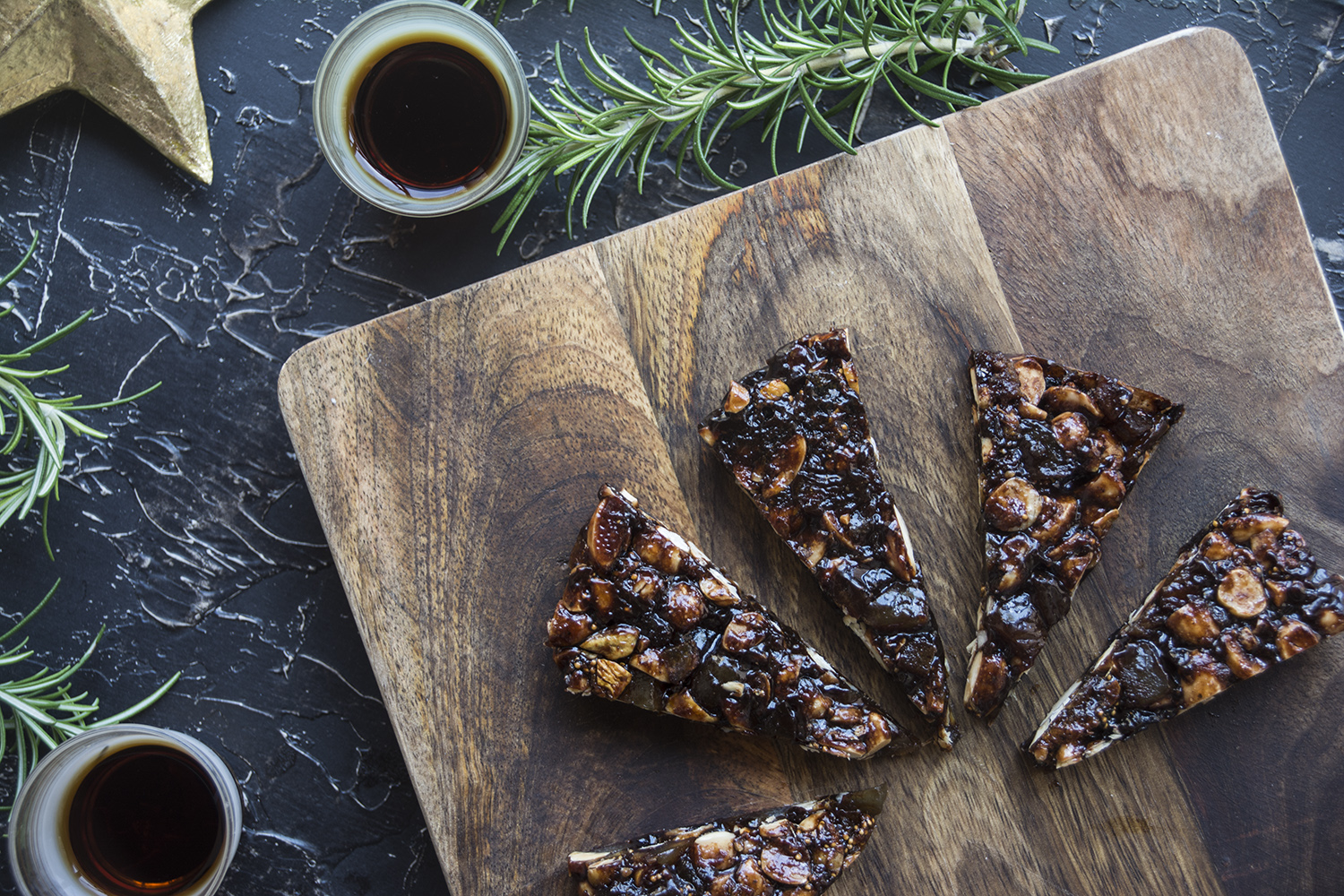 I will start off by admitting that the fruit and nut Christmas bar was a mistake – while making panforte (the first time since last Christmas), I forgot to add the flour. I only realised it in the final stage of preparation, when I was adding the molten sugars to the spicy fruit and nut mixture. And it was waaaay too late to add the flour at that stage. When I got it out of the oven, I removed it from the tin and it started collapsing. I reshaped it as it cooled, set it aside and started making another panforte, making sure I measured the flour and added it to the bowl before I even started preparing the other ingredients. And when the first panforte cooled, it hardened and turned into a kind of spiced fruit and nut bar. I cut it into wedges, wrapped it in foil and put it in the fridge and labelled the wedges clearly. That evening after dinner Mark asked if he could try what I had made – I didn’t tell him about the two versions – and he grabbed a piece.  This may be a generalisation but men don’t often look at labels, and he had a piece of the gluten free version. “This is incredible” he told me between sweet chewy mouthfuls, “I had forgotten how good this is”.

So it seems that the flourless version worked well though the texture was not cake-like and it softened quite a bit when left out of the fridge. So I remade it, purposefully leaving out the flour this time, and decreasing the amount of sugar/honey mixture. I also altered the dread fruit and spices to match what I had in the pantry. Anyway, it worked well and a more-than acceptable gluten-free sweet. And the next time I make it I might try not baking it – without the flour there is probably no need to, as it will harden as the molten sugars harden.

The photos from the party – mainly taken before most of the guests arrived – were taken by Ian Summers, good friend and medico. Ian is also the person who jumped in and generously gave me some of his Italy photos for my cookbook (6 in total) where I had some gaps during the final edit. He likes to point out that the title of the book Italian Street Food contains his name – and it is in bigger letters on the front cover than mine. The photo credits in the first printing were not quite right but have been corrected in the second printing (so hopefully the book will be available from Amazon.com again very soon). So a huge thank you to Dr Ian and his lovely smiling wife Lisa (standing next to me in the photo on the right below). 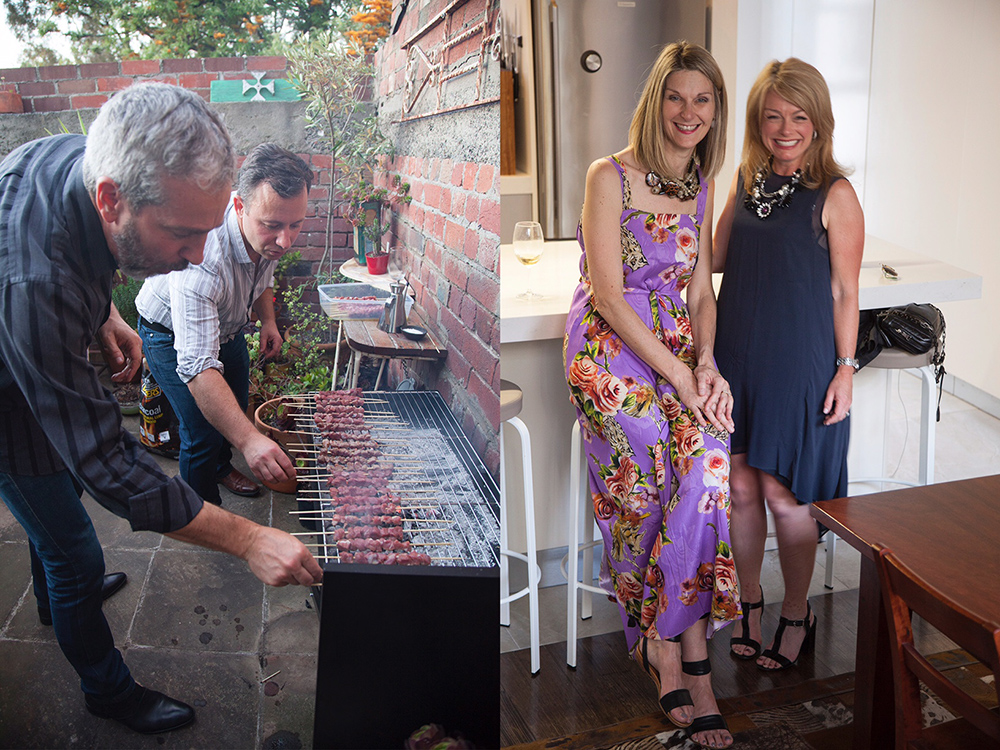 My friends Verdiana and Lily helped me with the food preparation for the party (and as 45 people came, there was A LOT of prep); all recipes were from Italian Street Food. During the party, Paolo and Mark ably managed the arrosticini on the terrace and Verdiana worked tirelessly with her niece Chiara to serve tray after tray of food to the guests. At the end of the evening friends Keen and Matt helped me in a “cannoli filling” demonstration (all of us Masterchef Australia alumni so well-qualified to do the demo). It was an amazing night and a fabulous way to end what has been an amazing year. 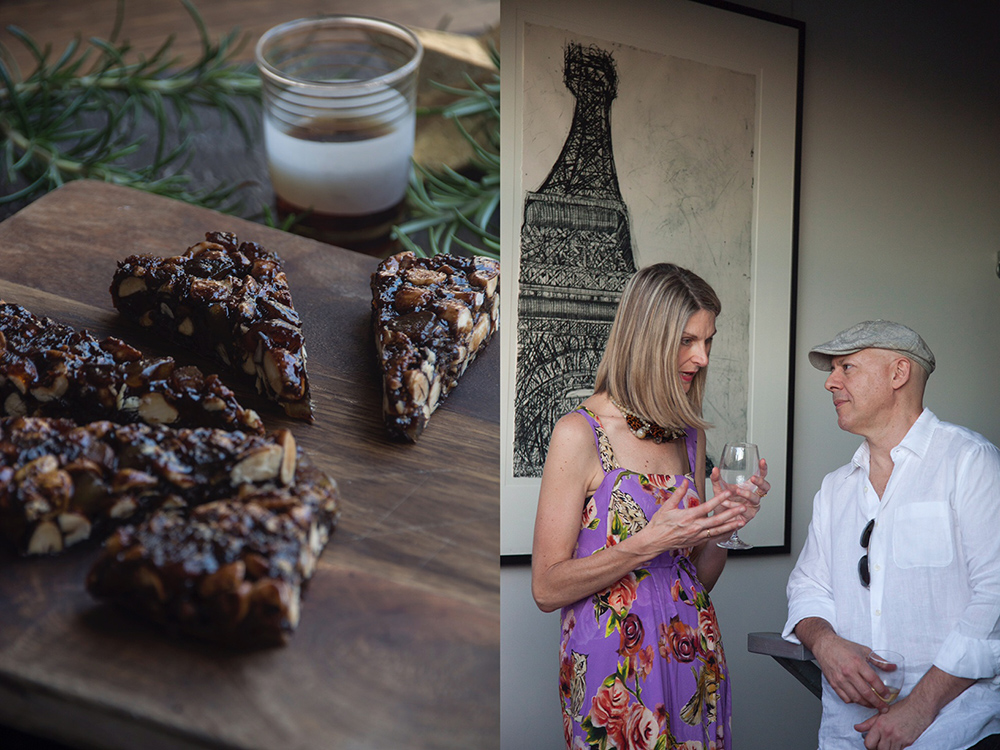 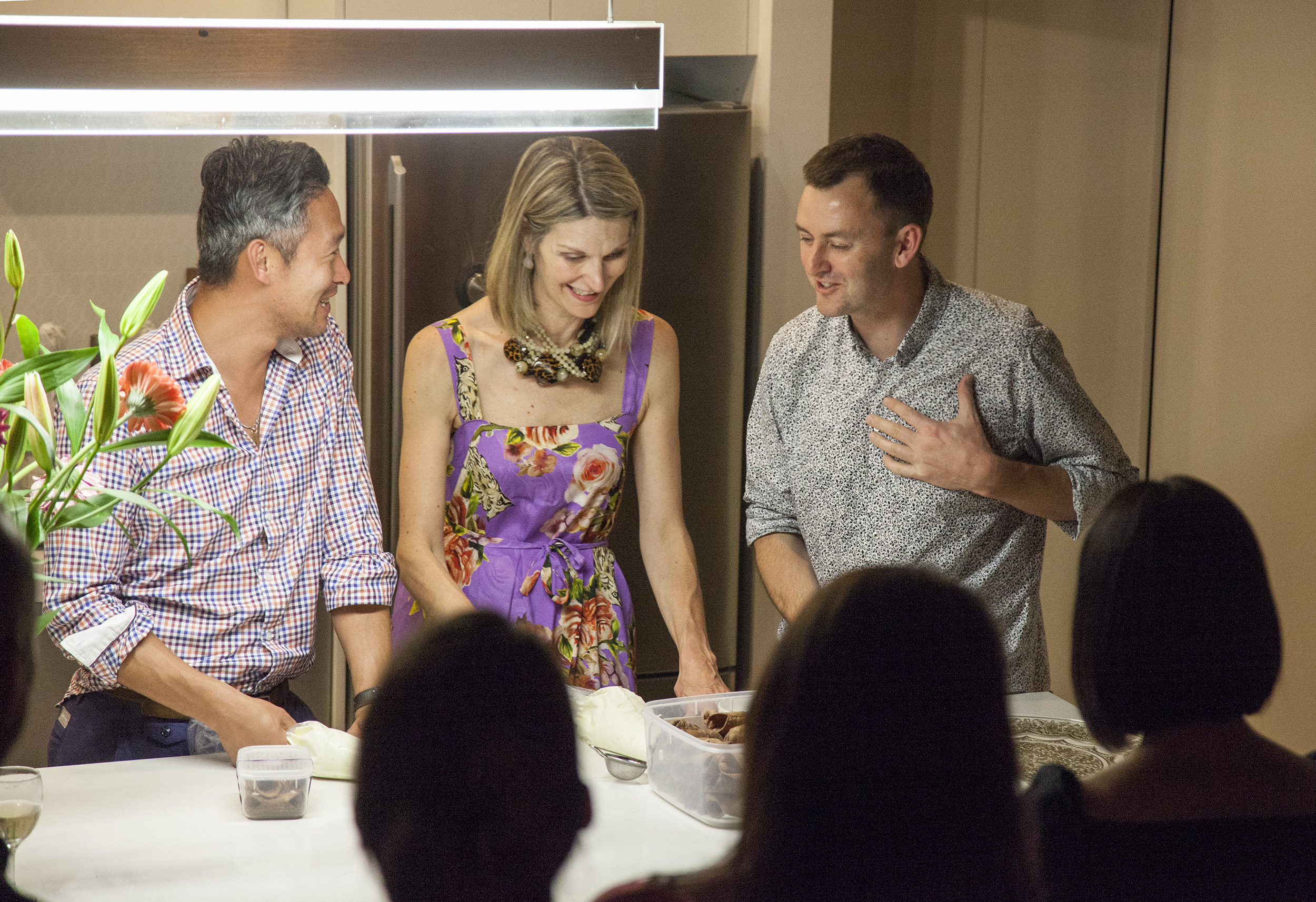 THANK YOU also to all of you out there – who read my blog, engage with me on social media, make my recipes, come to my cooking classes and have bought Italian Street Food.  I love the way I have been able to connect with you and share memories of food and look forward to everything that 2017 will bring xx 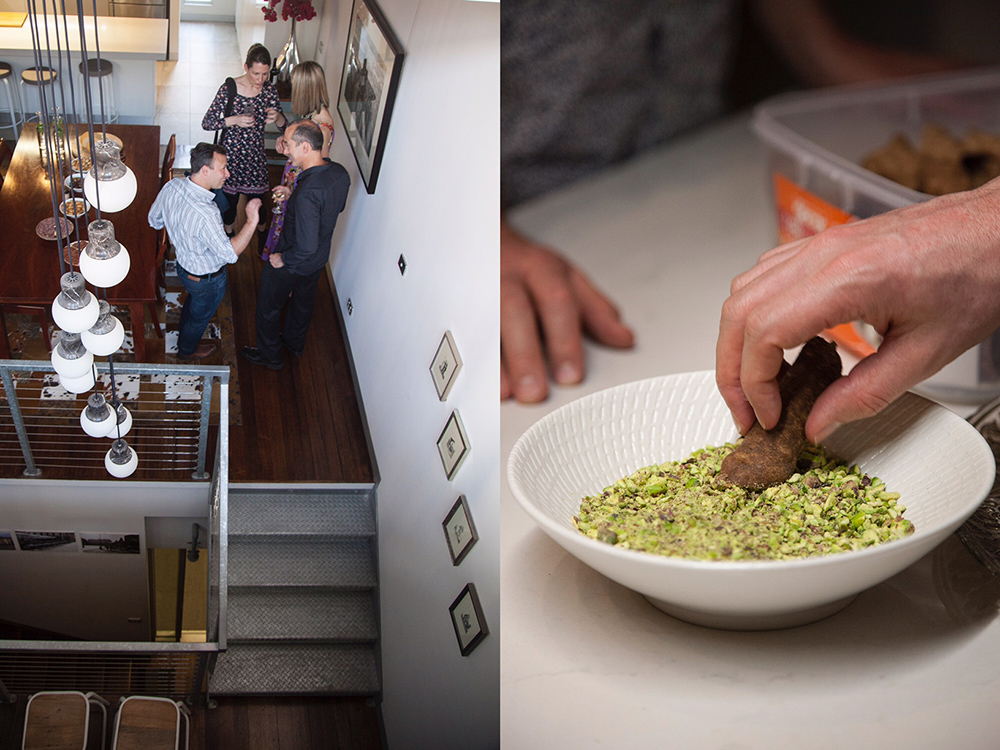 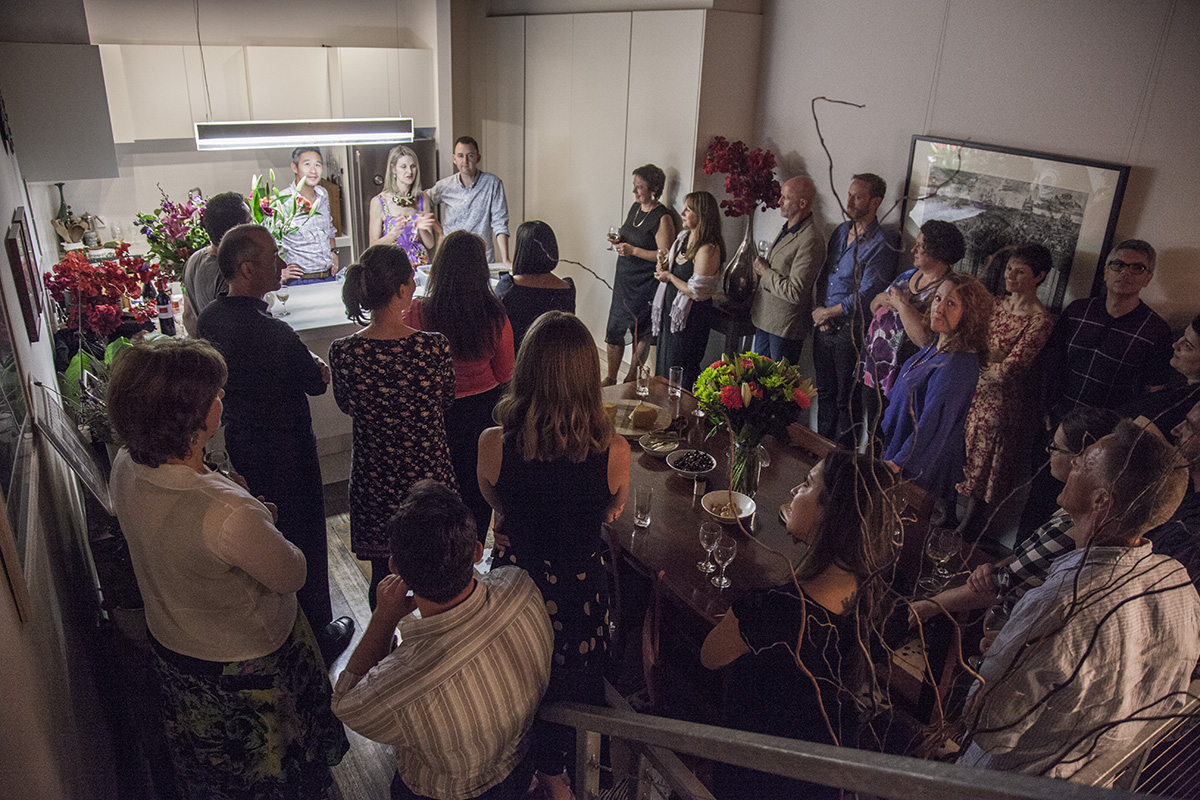 Preheat the oven to 150 degrees. Lightly tin with small dabs of butter and place rice paper on the base (cut to fit the base) and grease the sides of the tin with a bit of olive oil. Roughly chop the nuts then place in a large bowl with the orange peel, apricots, ginger, figs, prunes, cocoa powder and all the spices. Mix until well combined.

Prepare a spatula and spoon by covering them in oil before doing the next step. Heat the honey and sugar on medium heat in a small saucepan, stirring until the temperature reaches 115 degrees on the candy thermometer. Working quickly, pour the molten sugars into the bowl with the rest of the ingredients and mix with the spoon. The mixture will be quite dry to start with but after a few minutes, it become very thick and wet with the sugars. Spoon into the prepared cake tin and pat down with the oiled spatula so that the surface is flat.

Bake for 30 minutes at 150 degrees. The center will be a bit soft when you take it out, but it will harden as it cools. Place on a wire rack and allow to cool about 10 minutes. Remove the sides of the tin. Allow to cool completely before serving. Cut into wedges and store in the fridge (wrapped in baking paper).