We went to the town of Mansfield to stay with friends a few weekends ago. It was a rather wet and cold weekend as we drove the two and a half hours from Melbourne to the Victorian High Country. Pamela and Stuart live in a divine modern house on several hundred acres that was featured on Grand Designs Australia a few years back. The view from the outdoor dining table overlooking the garden and the property is spectacularly beautiful and very Australian.

As expected, it turned out to be a very foodie weekend. We met for coffee in town and after a light lunch, headed over to visit Mick and Rowena who run Long Lane Capers. The business started a couple of years back and was a finalist in the 2012 and 2013 Delicious Awards and a medallist in 2014. The capers are picked by hand and cleaned, salted with Murray River salt and placed in jars in the family kitchen. They also produce caper salt and caper berries. Rowena gave me a copy of a recipe card she had made up and was handing out at various markets – the recipe was one of mine from a blog post a few months back for caper, mint and almond pesto – what a surprise, thanks Rowena! We went to see the fields where the capers grow – I had no idea the plants were so low to the ground. In winter they are pruned back to stumps but start thriving in spring and are picked in summer. Several were starting to bud on the plants when we visited. Picking them seems like back-breaking work – I was seriously impressed with what Mick and Rowena have achieved. 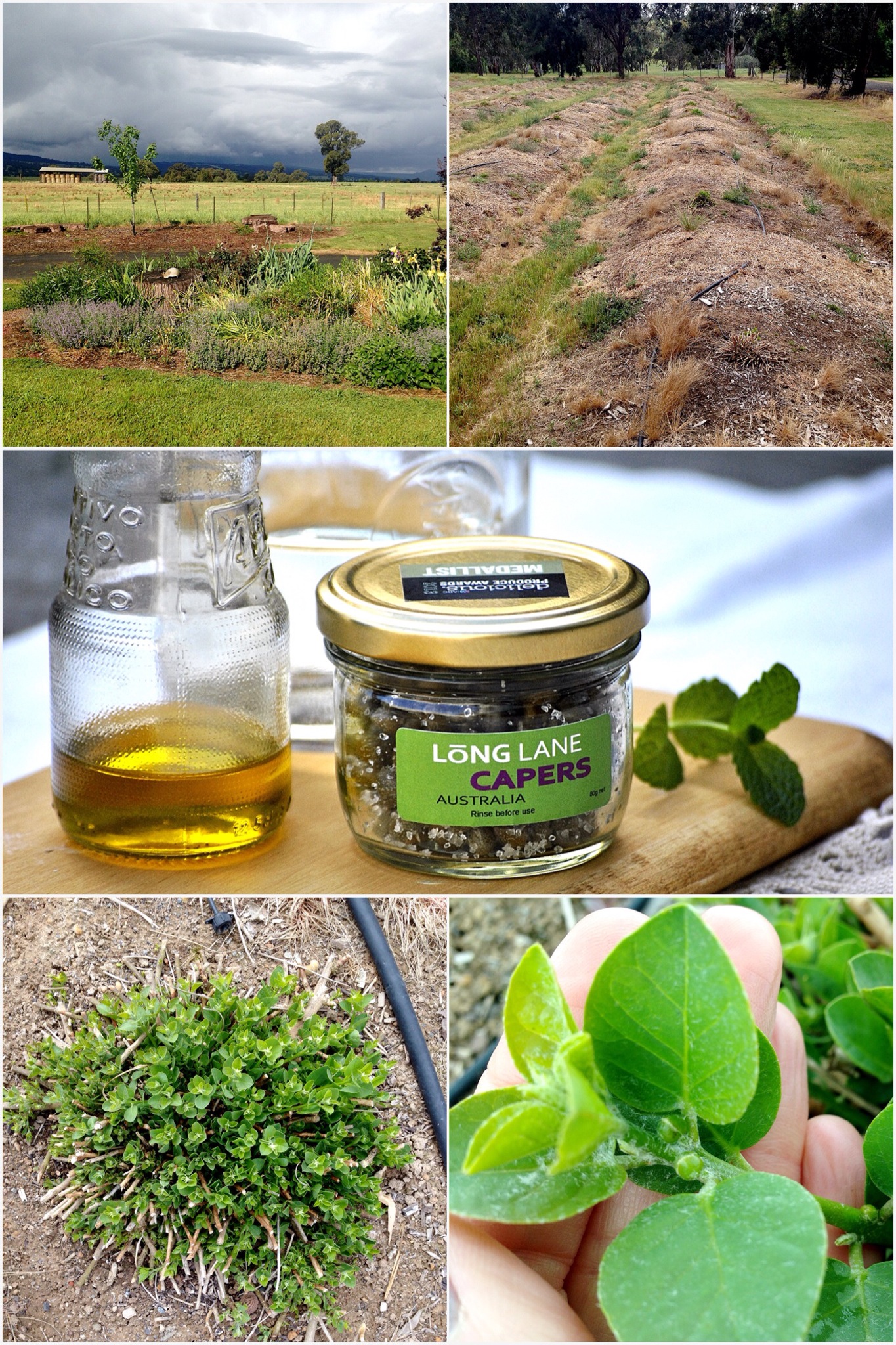 Later that day, we had a tour of Pamela and Stuart’s Mansfield property including the house, the cellar (for wine and storage of preserved fruits, jams and the like), the thriving vegetable garden and the under-cover orchard that has recently been constructed and planted. I was really looking forwards to making dinner in Pamela’s incredible kitchen (you can see the kitchen detail in the video link at the end of the post). Making the most of what was in season in the garden, we picked artichokes, broad beans, parsley, mint, garlic, radishes plus a whole lot of salad greens. All the young garlic had just been harvested and was ready to use but not quite ready to be made into a plait. 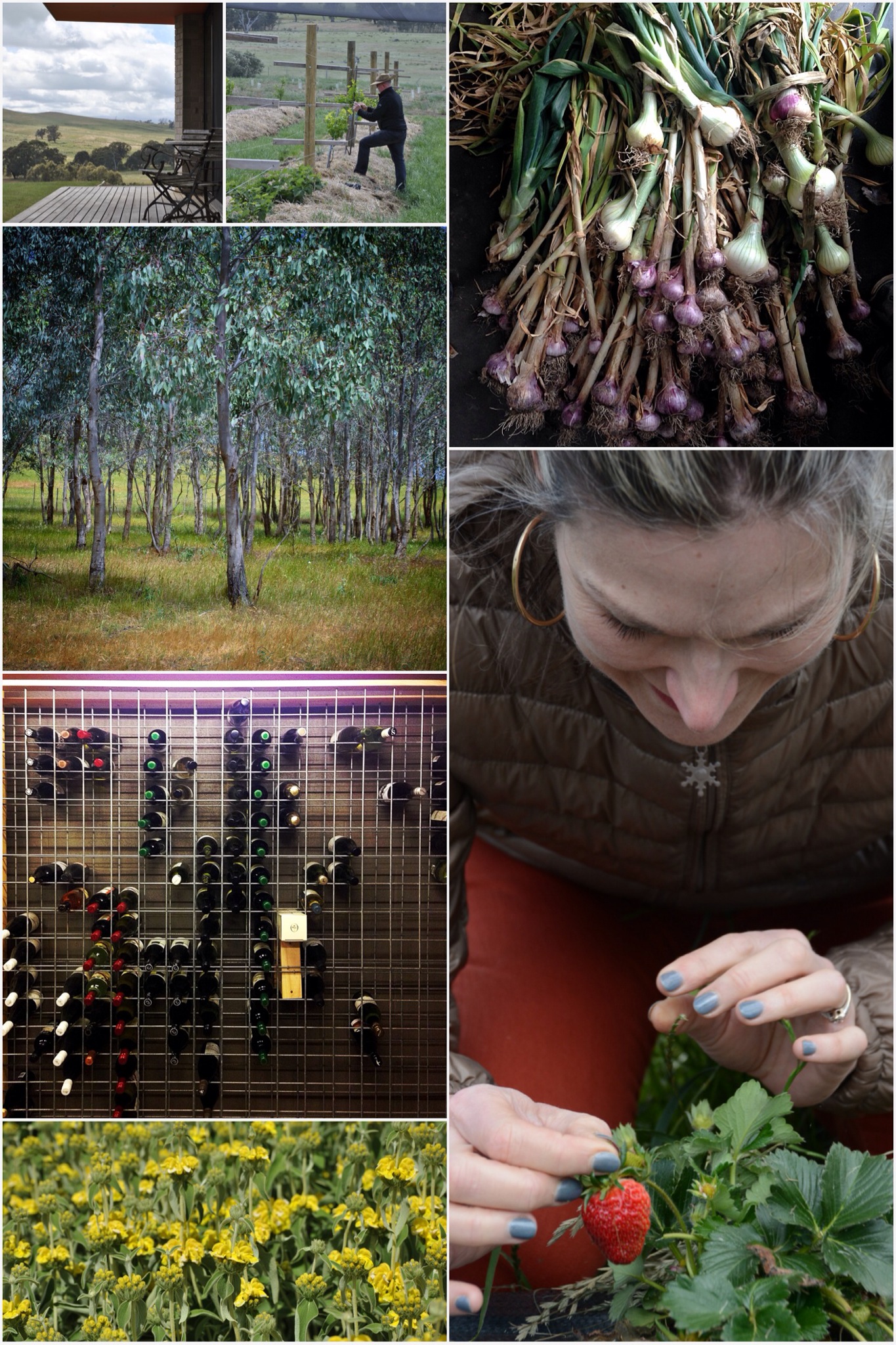 Pamela had been thinking she might pull up her artichoke plant as she was not quite sure what to do with the artichokes and in particular how to clean them. I pointed her to a post from 2013 for stuffed artichokes that has photos of my mother cleaning artichokes and then we stepped through the artichoke cleaning process. Anyone who has prepared artichokes will know that it is laborious (and you need sharp knives) but very much worth the effort. As they were different sizes, we stuffed some of them (using the recipe linked above), kept baby ones whole and prepared the base of the larger artichokes, cutting them into discs just like they do in Venice. We worked looking out over the property, ably assisted by Stuart (who made the Aperol Spritz and took some of the photos that appear in this post).

For dinner we started off with a cheese platter, followed by the artichokes, some home made tagliatelle with broad beans, olives and mint and then finished off with a rustic strawberry tart. It was a magnificent dinner, accompanied by some fine wine and spent in the company of good friends. That is what food is all about for me: home grown or farm grown organic produce, food preparation in the company of family or friends and then sharing the seasonal food that you have made at a table, thus creating memories of the food and of the shared meal. It doesn’t get much better than that. 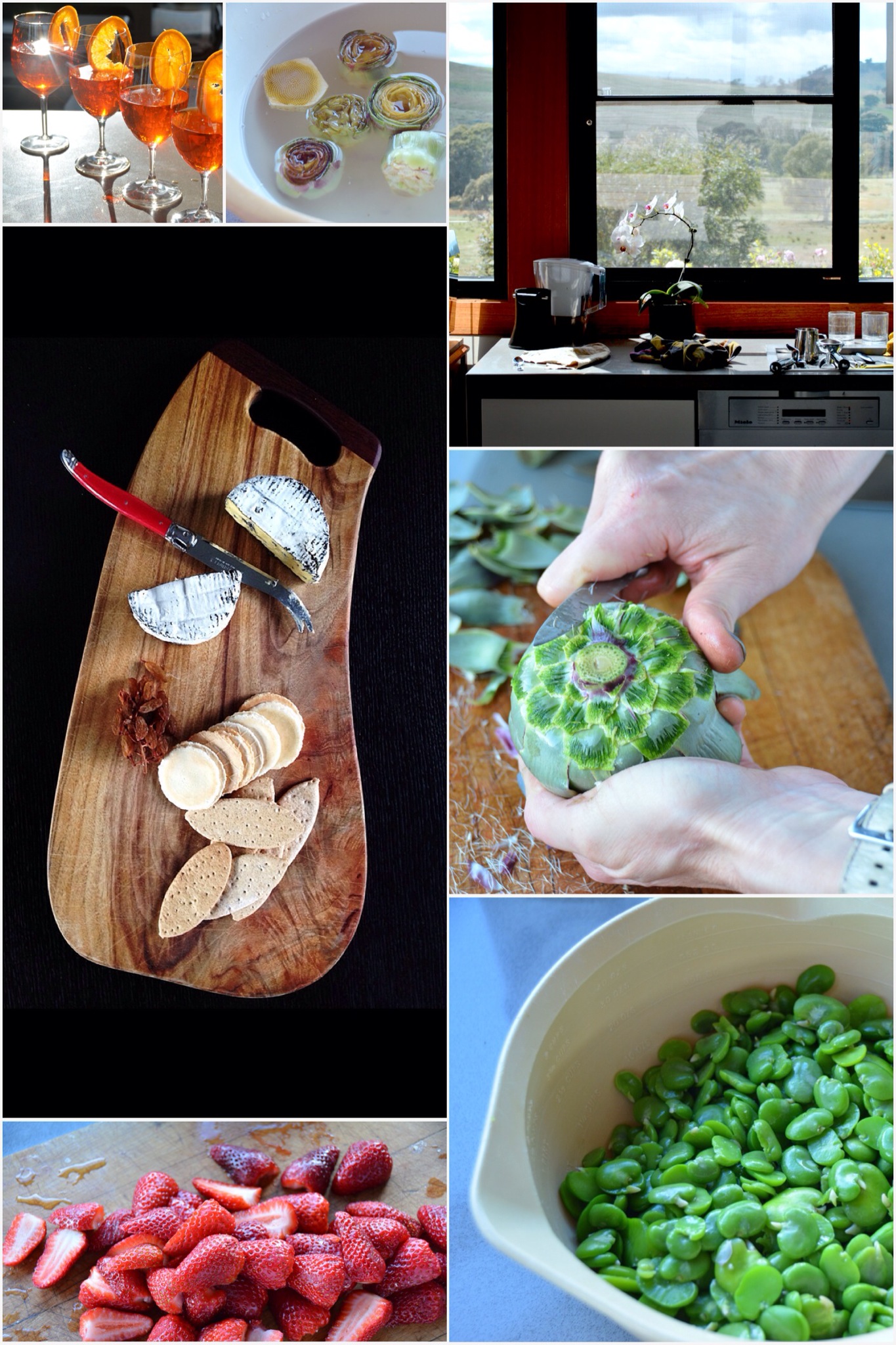 I wish we’d had time to stay a few more days in Mansfield – such a beautiful place – and Pamela and Stuart were brilliant hosts. Here is a link to a behind the scenes walk-through video of the Mansfield House from Grand designs Australia http://bcove.me/h0uvhbl0 (note there is a short advertisement before you see the video) so you can see it for yourself.