Since my father passed away in March this year, my brother in law Chris has been holding the fort in what was my father’s vegetable garden. He has been planting all the vegetables and herbs that my father used to have, plus a few more varieties (broad beans, eggplant). In between his visits to my mother’s house, she has been watering and tending what was once solely my father’s domain. A strong memory for me is papa’ working in the garden, wearing his checked shirt and waving to all the neighbors who beeped their horns as they drove by. 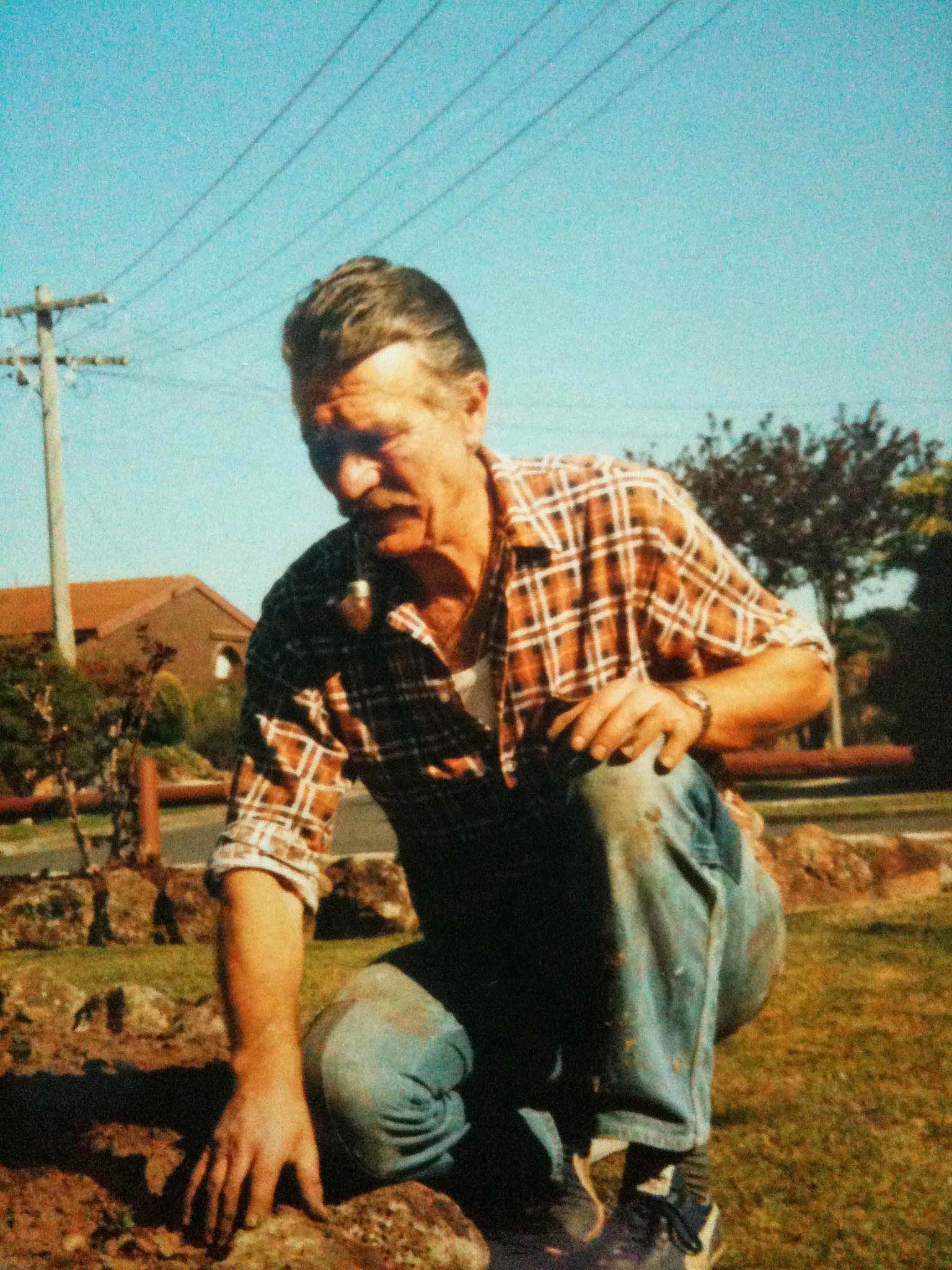 A few months ago, I planted a punnet of rainbow chard that Chris had bought but not got around to planting. It felt quite strange working in dad’s garden. When he was unwell last year, he would sit on the terrace whilst I was picking parsley or rucola (rocket) to take home, watching me and say “prendi quanto che ti vol, questo xe el tuo giardin” (take as much as you want, this is your garden too). I have many memories of him proudly presenting the family with armfuls of tomatoes, radicchio, garlic and so much more. It felt very special for me to be planting those seedlings in his vegetable garden.

Well how they grew! This is in spite of the fact that Minna, the ginger cat took a liking them and alternated between trying to dig them up and lying on them. My mother concocted a way to keep Minna away – she surrounded the growing vegetables with thick slices of garlic. Well that seemed to do the trick for a few weeks at least until the rainbow chard could stand Minna’s feline assaults. 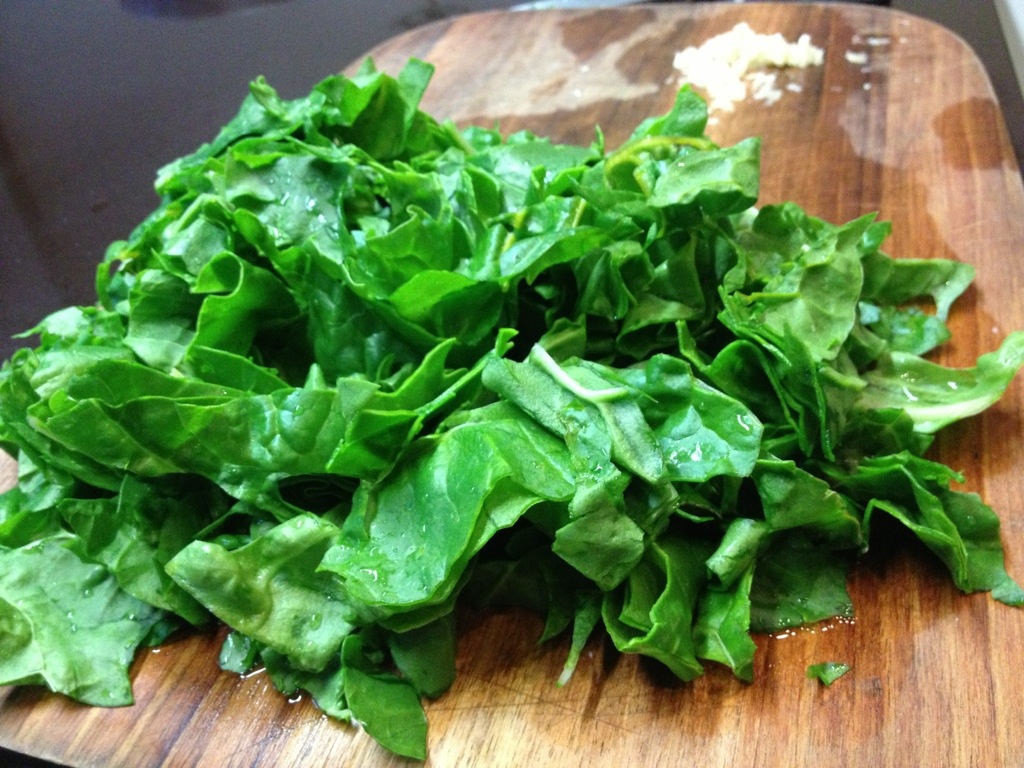 So last week the time arrived to pick some leaves – I picked around ten of the largest outer leaves, took them home and put them in a glass jar filled with water on the kitchen bench. They were plump, green and gorgeous with red, yellow and creamy stems. I thought that it would be fitting to make a favorite childhood recipe with them, loved by papa’ – my mother’s erbete con le patate. We would eat this when I was growing up as a side dish with fish, chicken or steak. It is smashed potatoes with a bit of a green twist. I varied it from mamma‘s simple recipe by substituting silver beet with rainbow chard (they are very similar anyway), grated in some parmigiano cheese and some lemon zest at the end. It is still very simple and delicious, especially because the greens were so tasty, fresh and completely chemical free. I think papa’ would have loved them. 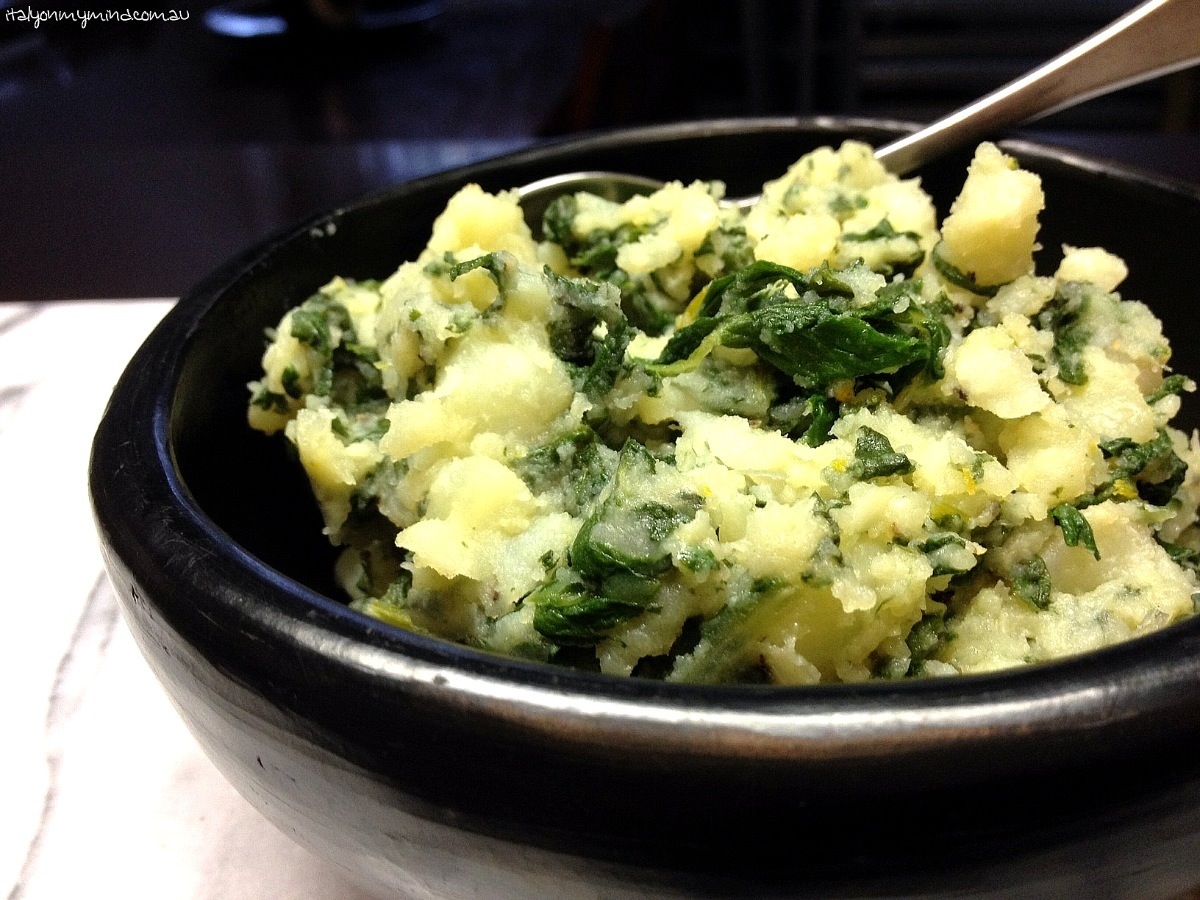 Put the washed, whole potatoes in a pot of boiling water and cook until tender (around 30 minutes).

To prepare the silver beet – remove the spines, roughly chop the leaves and rinse them well, especially if it is not organic, to remove any chemical sprays. Plunge the leaves in the boiling water in which you are cooking the potatoes. Leave them in with the potatoes for a few minutes and then remove with tongs (or you can use a separate pot of boiling water – I am just being water conscious!). You will need to squeeze all the excess water really well from the drained leaves at this point. Set them aside. 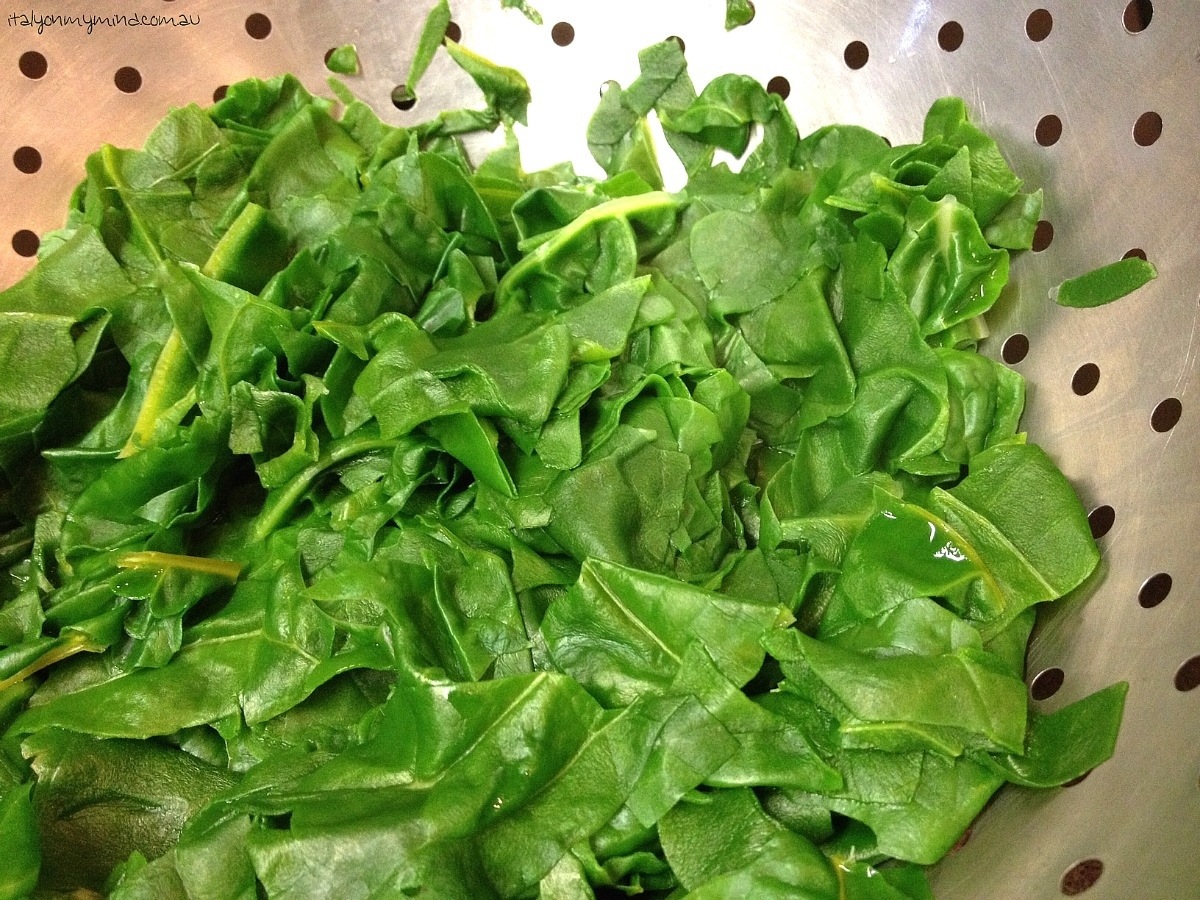 In the meantime, place the garlic in a medium sized frypan, cook on medium heat until fragrant and add the drained silver beet leaves. Cook until they have heated up and are coated with the olive oil and the garlic is mixed through. Add salt and pepper to taste. You should only need to cook the greens about 5 minutes before adding the potatoes. If the potatoes aren’t quite ready, just turn the heat on the frypan to very low and stir every now and then. 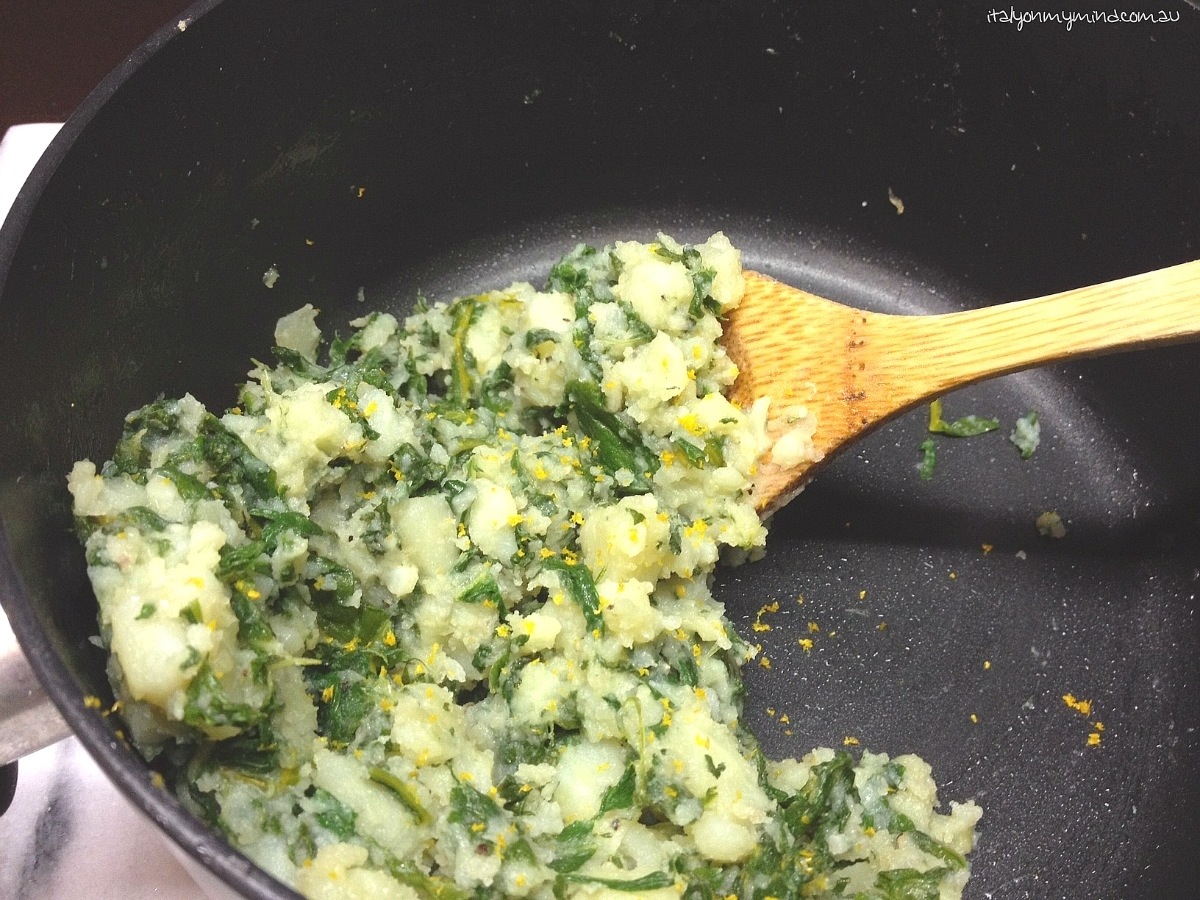 Drain the cooked potatoes, peel and chop them into smallish pieces. It is fine is some of the potatoes become mashed and some pieces are soft potato cubes – this texture is what you are aiming for. Place the potatoes back in the medium sized saucepan, add the cooked silver beet and stir through so it is all mixed evenly. Add more salt and pepper if needed, the parmigiano and if you like, some lemon zest. Stir through and serve as a side dish with your favorite meat or fish. Drizzle on some more extra virgin olive oil if needed. 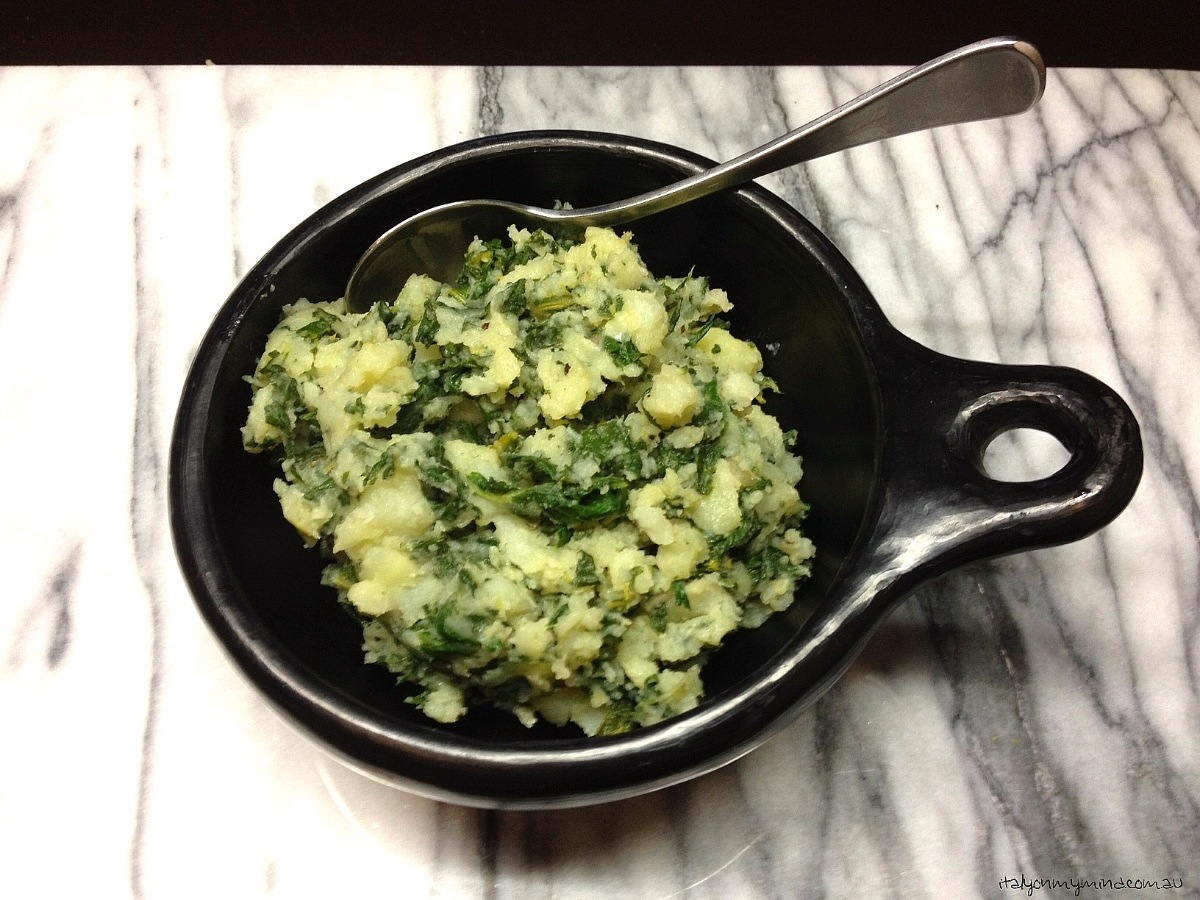