By italyonmymindJune 28, 2015Blog, food and travel, Italy - the south If you follow me on Instagram you will know that I broke my wrist just over a week ago. You will know that I slipped on wet leaves, was briefly airborne, and landed unceremoniously on my outstretched arm (and wrist) on the pavement on Rathdowne Street Carlton. That little event has put a major dent on daily activities (such as cooking) and means that not only will I have had to reschedule a couple of cooking classes but that my next few blog posts will have more travel photos and food stories than recipes in them. Luckily I took lots of photos when I was in Italy earlier this year. I am pretty excited to be writing about my time in Salina, an island off the northeast coast of Sicily. 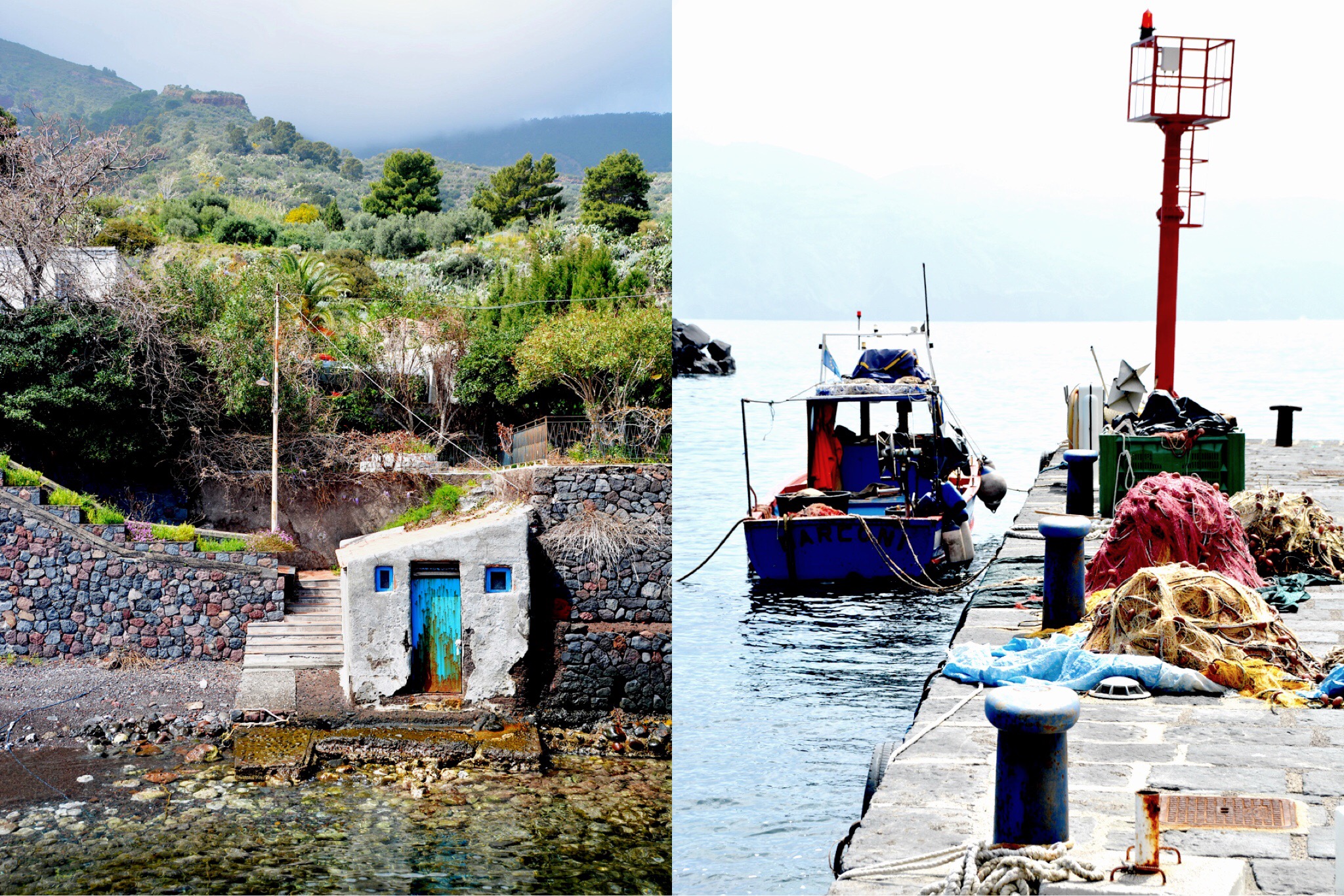 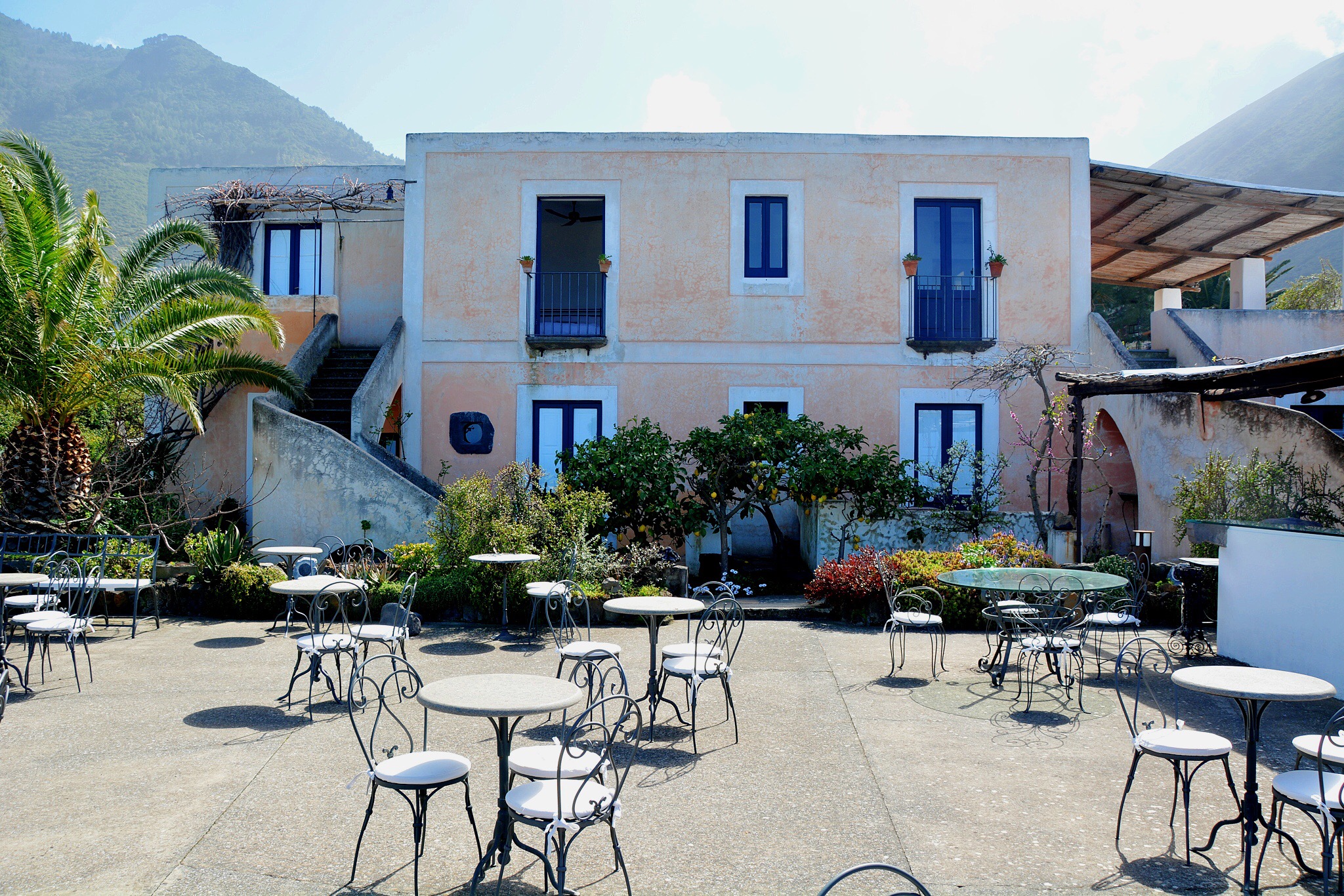 It seems obvious but I didn’t realise that the Aeolian Islands are part of a mountain chain that joins Mount Etna in Sicily with Mount Vesuvius in Campania. That would explain their volcanic nature and at least for the island of Salina, its extraordinary fertility. Caper plants and grapes abound on this tiny island that is only 27sq km (10sq miles) with two volcanoes and five towns. The volcanic and mountainous centre is surrounded by a stunning coast line. Not surprisingly the good folk of Salina are fiercely proud of their island and all seem to know one another. Our taxi driver (who picked us up from the ferry port of Santa Marina) suggested a restaurant owned by his cousin, a motorbike hire place that he owned and seemed to know the bus timetable off by heart. We stayed at the luxurious family-owned Hotel Signum in the township of Malfa, in a room above the terrace which had picture-perfect views of the sea. The sky and sea were mirrored in the tiles and pottery on the terrace and as it was the place that had a best wifi signal, we spent quite a bit of time there, looking out to sea, ordering cocktails from Rafaele and occasionally posting photos on Instagram and Facebook. 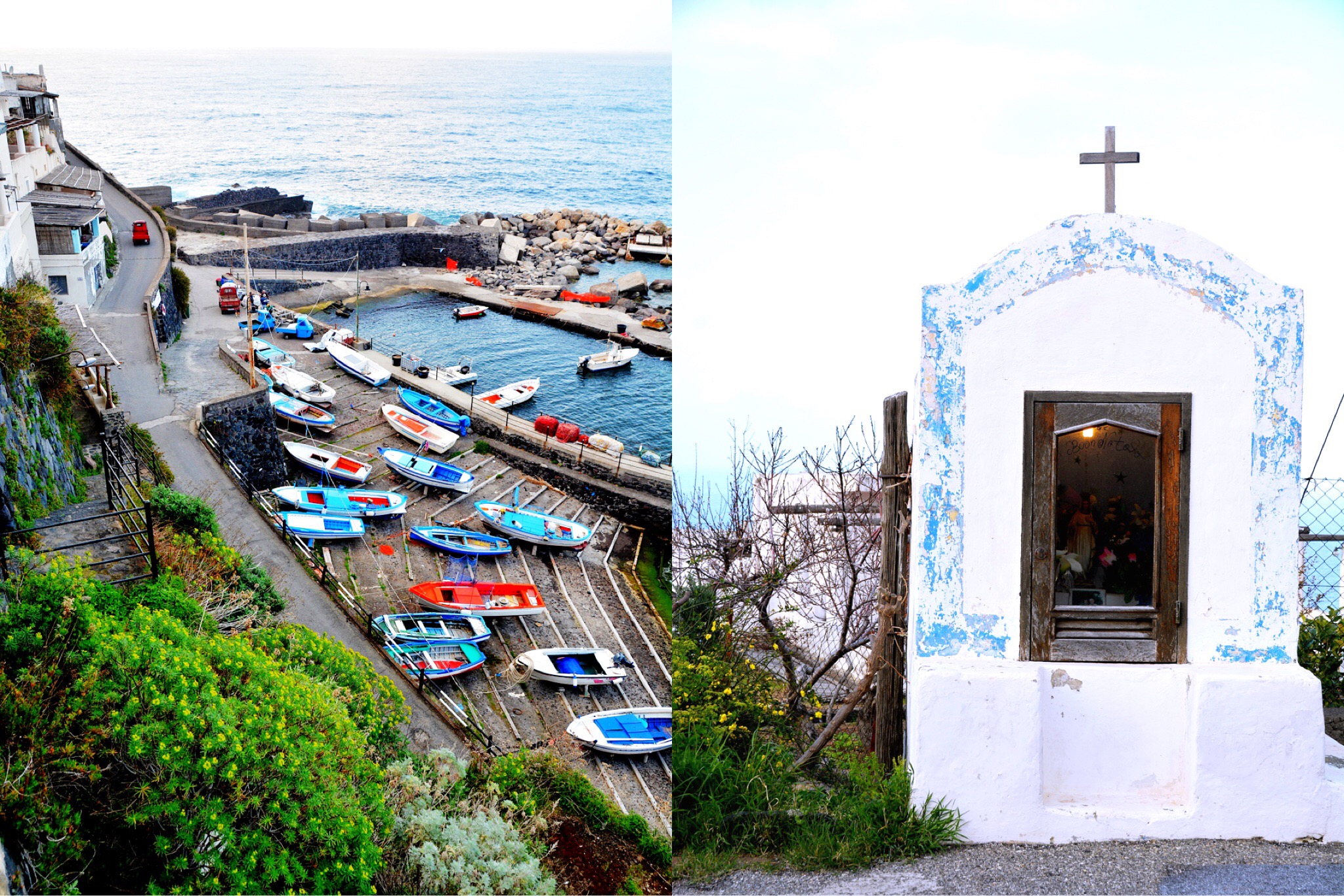 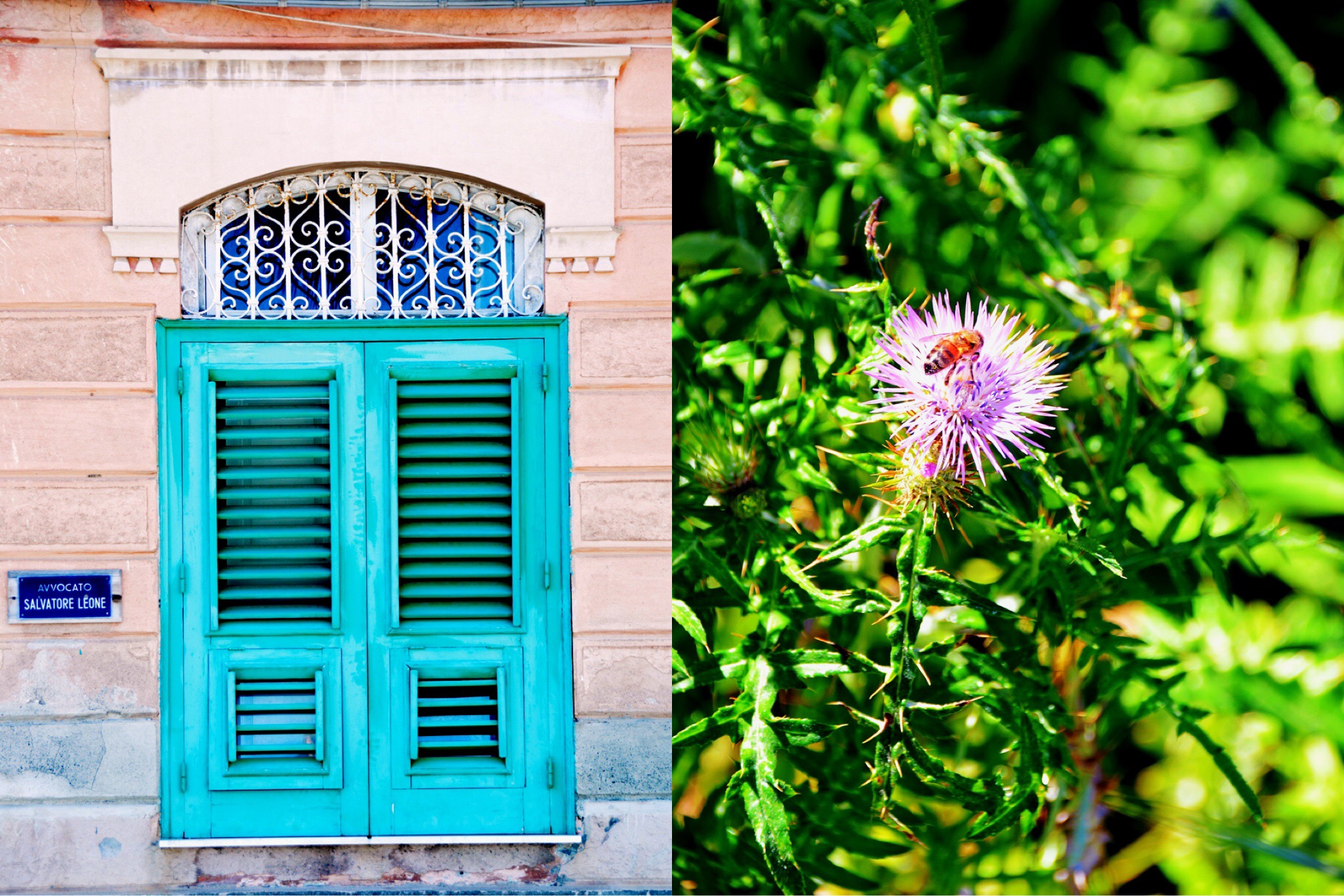 We went on long walks of the island, dreaming about buying a tiny property, turning it into a cooking school, writing a book, making wine with Malvasia grapes, fishing for our daily meals and waking up every day to that glorious view of the sea. We found the BEST cannoli on a walk one day, in a pizza restaurant in a narrow laneway in Malfa – crisp, fresh, not too sweet and simply delicious. We ate them in the early spring sun with a coffee – it was one of those perfect memorable moments when it seems that the rest of the world does not exist. It was just us, the view of the water, the vines on the hillside, great coffee and the cannoli. 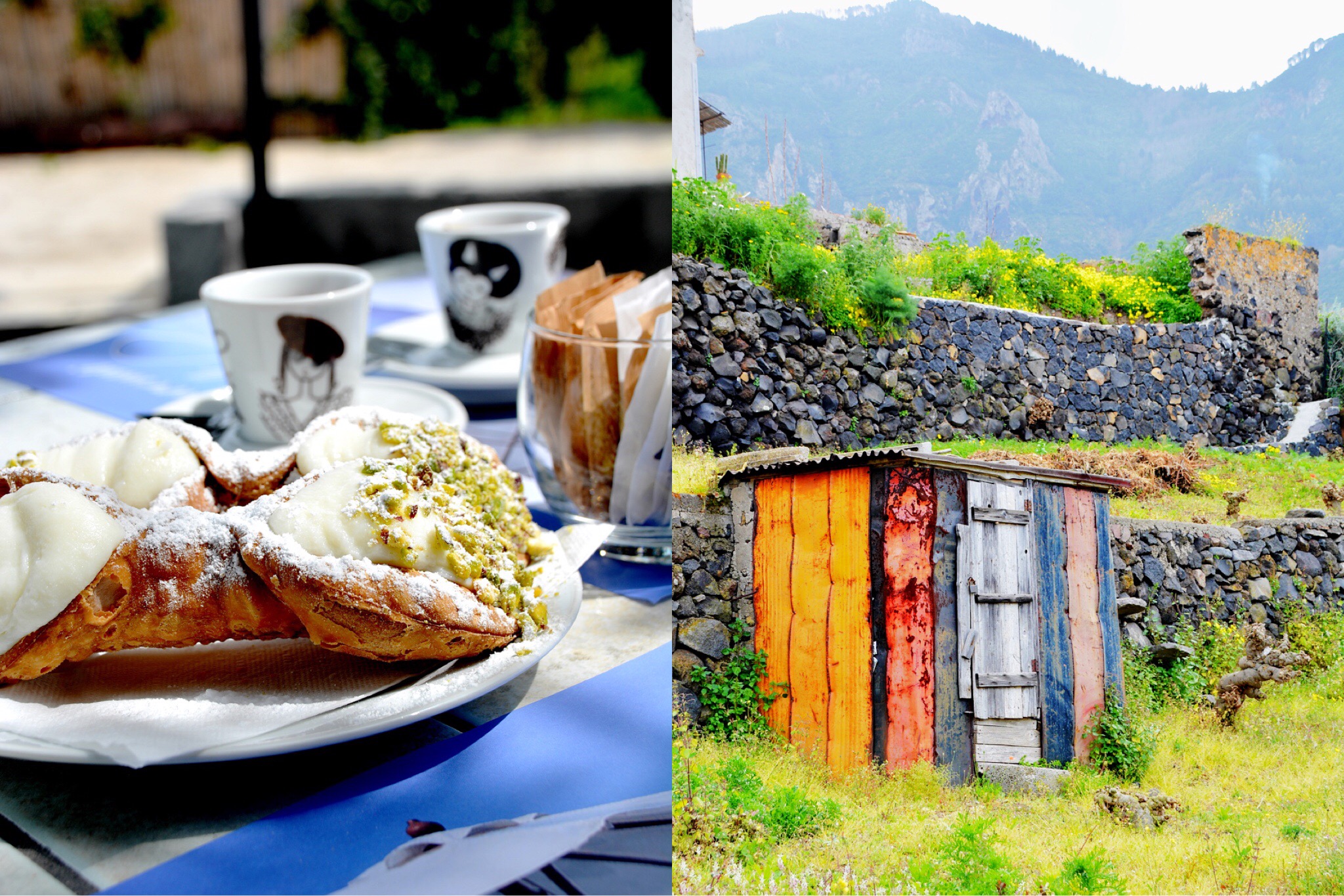 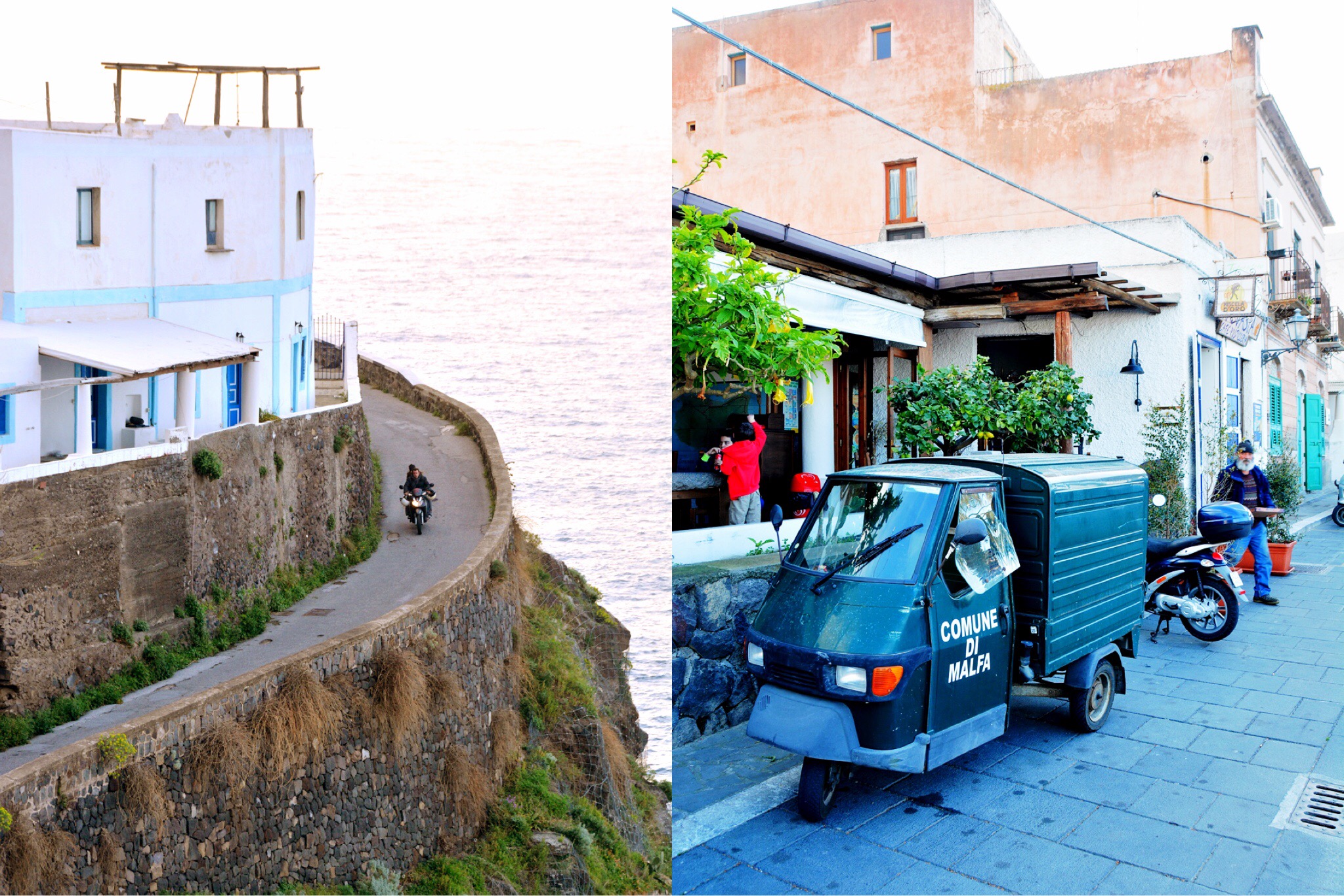 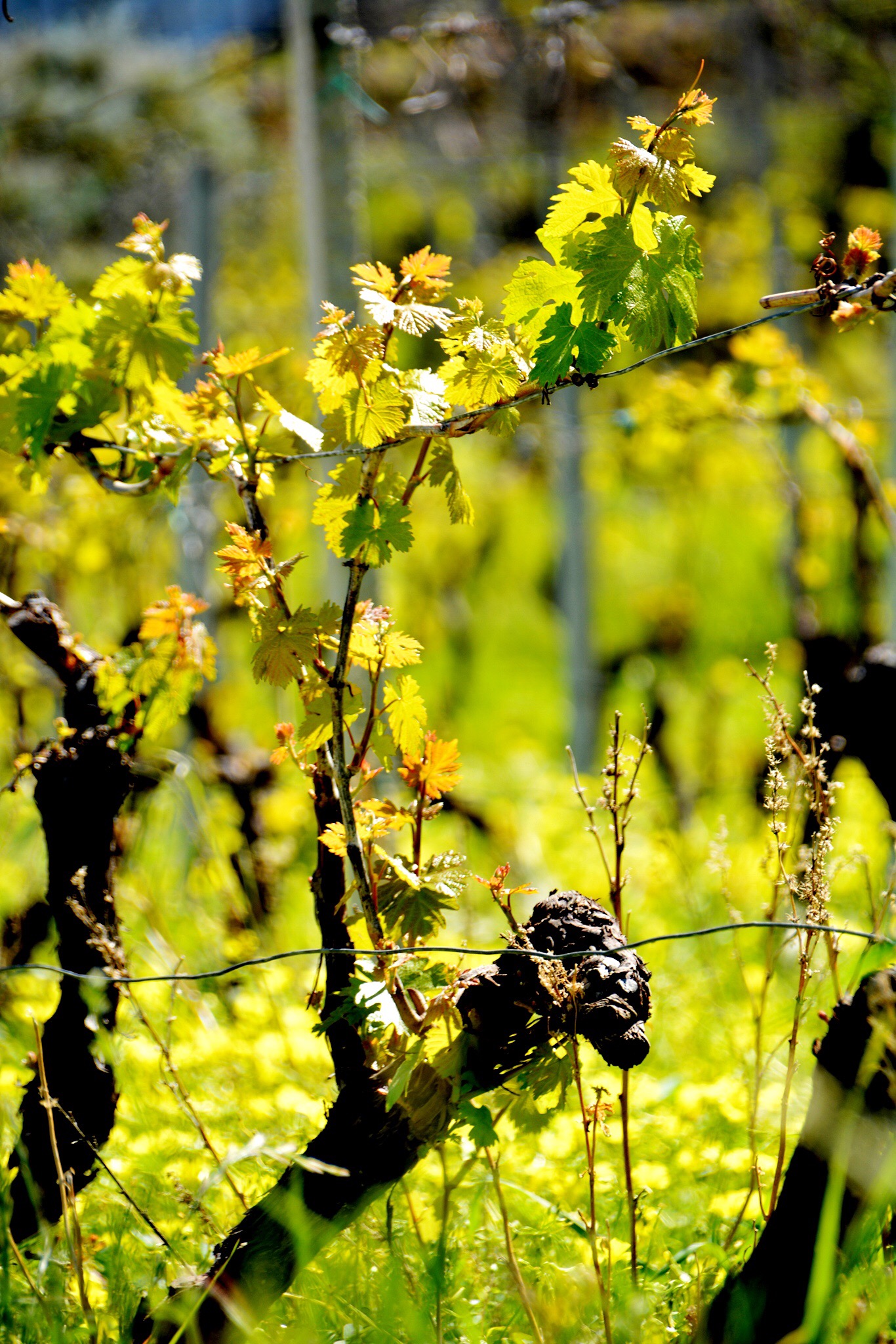 Salina was one of the main filming locations for the 1994 movie Il Postino (the Postman) and one of the reasons why tourists visit it, in particular the town of Pollara. I saw the movie for the first time a few days ago so had no idea about its connection to Salina until I was on a bus, headed to Pollara. I was in search of a caper farm called Sapori Eoliani and this is what I told the bus driver as we were heading down the steep narrow road towards the tiny town. He asked me if I was there because of the movie – I looked at him blankly, so he told me that Il Postino had been filmed on Salina. I smiled (and pretended I knew all about it) and told him yes of course, but it was mainly because of the capers. “Difatti i capperi di Salina sono i più buoni nel mondo” (capers from Salina are the best in the world) he replied as the bus pulled up at the bus stop next to the church. I waved him goodbye and  stepped out into the piazza, immediately noticing a painted character that appeared to be sitting on a stone bench. I took a photo of it not realising that it was actually a tribute painting of Mario (the lead character in Il Postino) – which I now realise as I have seen the movie (which was touching and I enjoyed immensely). Back to the real reason for my visit to Pollara… capers. 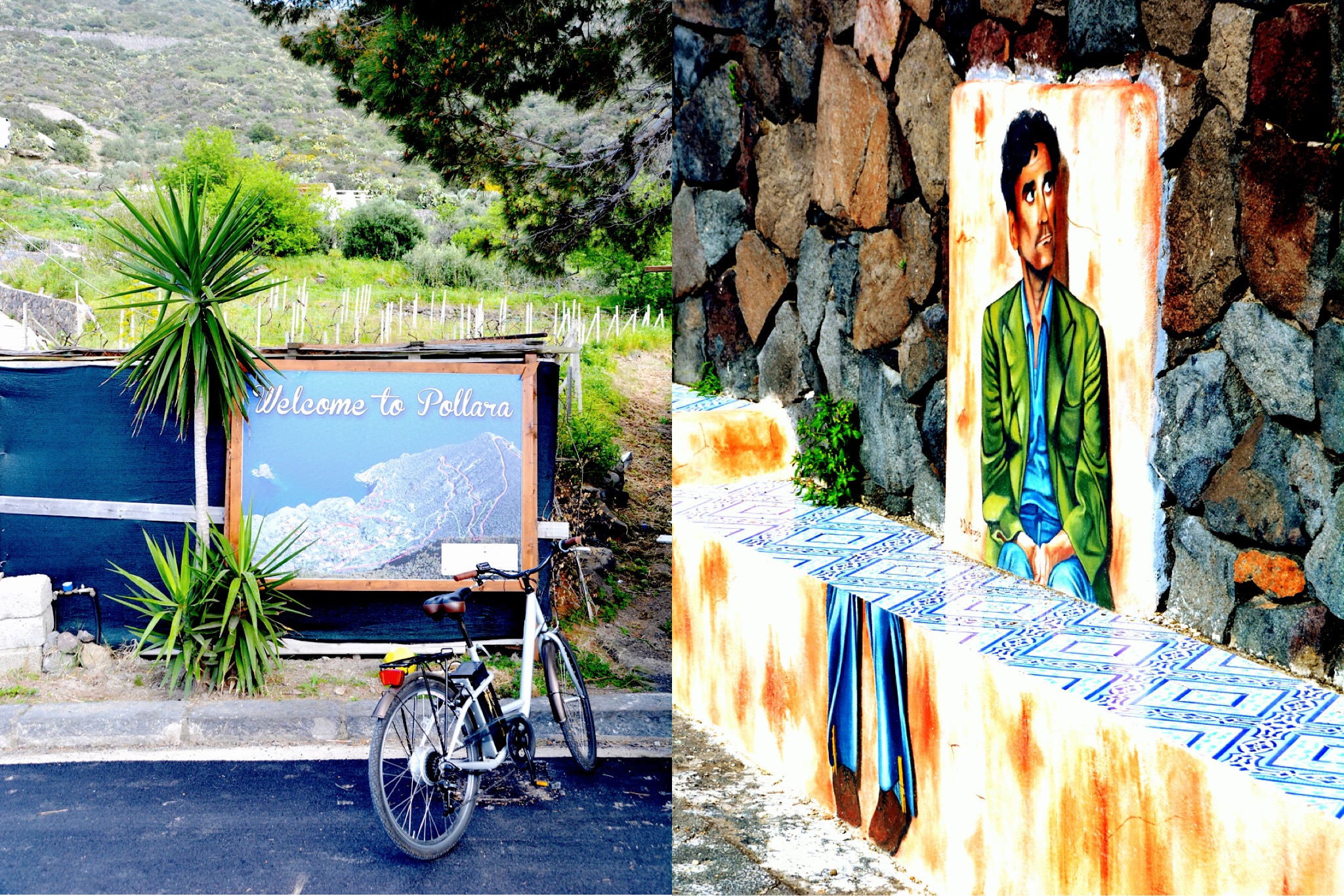 I followed the directions that Roberto, the owner of the caper farm had given me and found the sign to Sapori Eoliani. I peered into the property and saw rather curious looking gnarly stumps. I had seen caper plants at Long Lane Capers in Australia before so thought I knew what to look for (woody little plants only a few centimetres off the ground) – however I was unprepared for the size of caper plants on Salina – they were HUGE gnarly trunks at least 30cm above ground. I knocked on the door and was greeted by Roberto, who both lives and works on his farm. He took me on a brief tour of the property and explained that his grandfather had started the business and some of the plants were over 60 years old.  If you didn’t know what you were looking at, you could swear that the curious looking caper trunks were dead stumps in the dirt that were of no use to anyone. Capers are harvested in warmer months so this is why the trunks had no leaves or fruit – the new season’s capers were yet to develop. 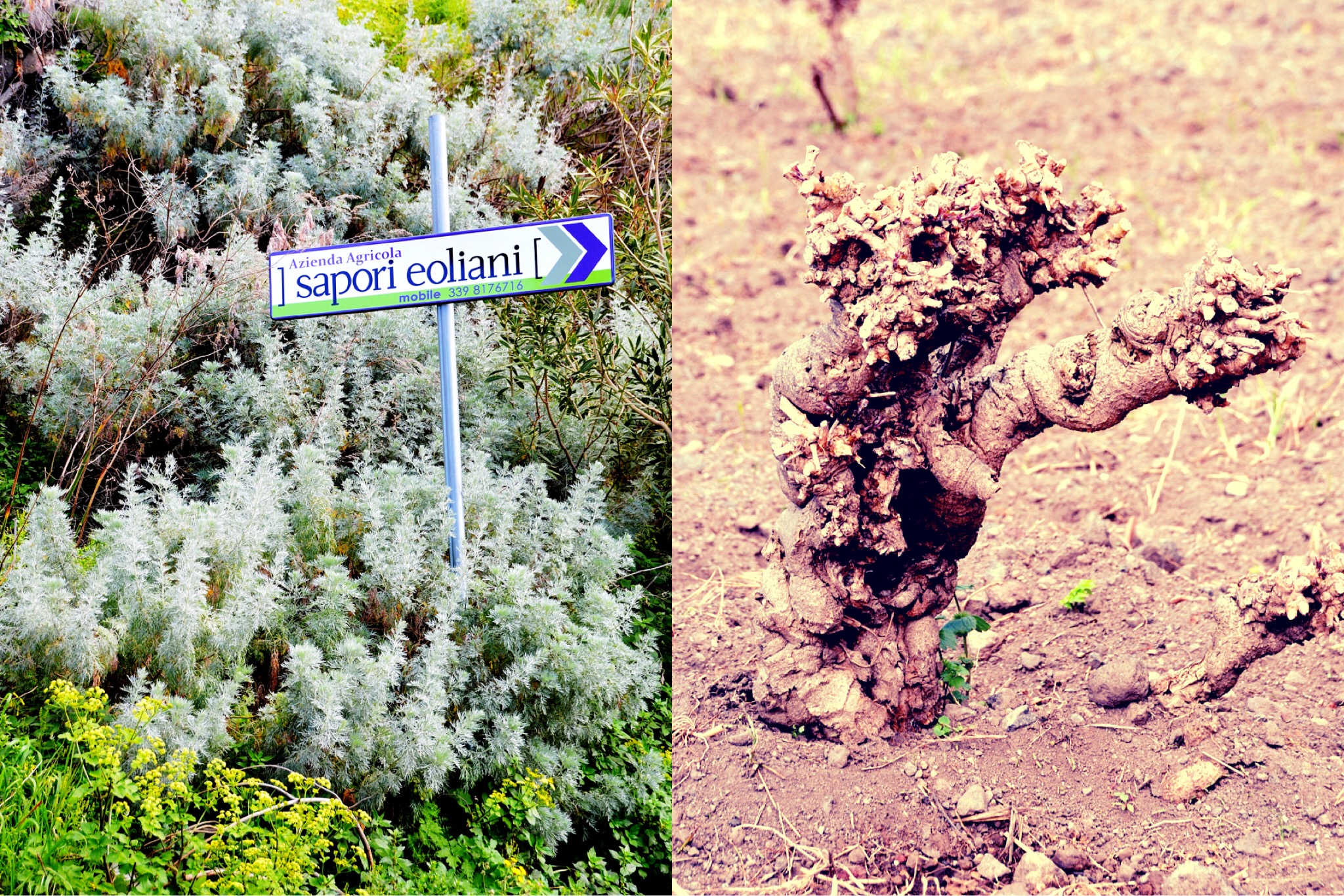 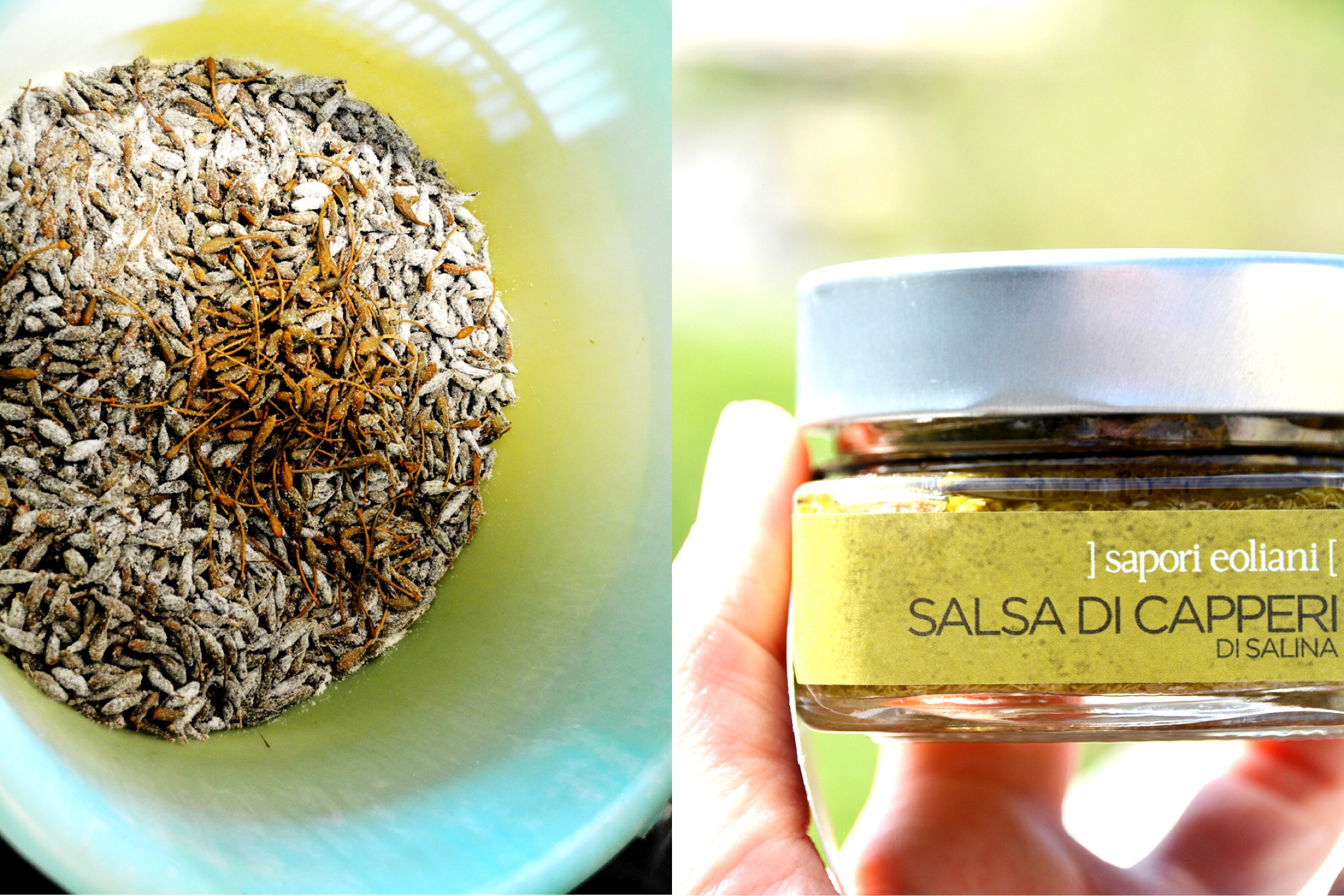 The caper farm is part of the Slow Food presidium and the produce is grown, harvested, treated and packaged according to slow food methods. Roberto is passionate about his business and recently had a short video made about Sapori Eoliani (note that it is in Italian – but even if you do not understand it, the scenery is breath-taking). He was pretty excited that I lived in Australia, and talked about some people from Salina who had moved here. He kindly gave me a couple of products to take with me: a caper sauce and the most delicious antipasto, containing capers, caper berries, tomatoes and local herbs in extra virgin olive oil. The antipasto was amazing (see photos below) – the capers were plump, flavoursome and nowhere near as salty as I expected. 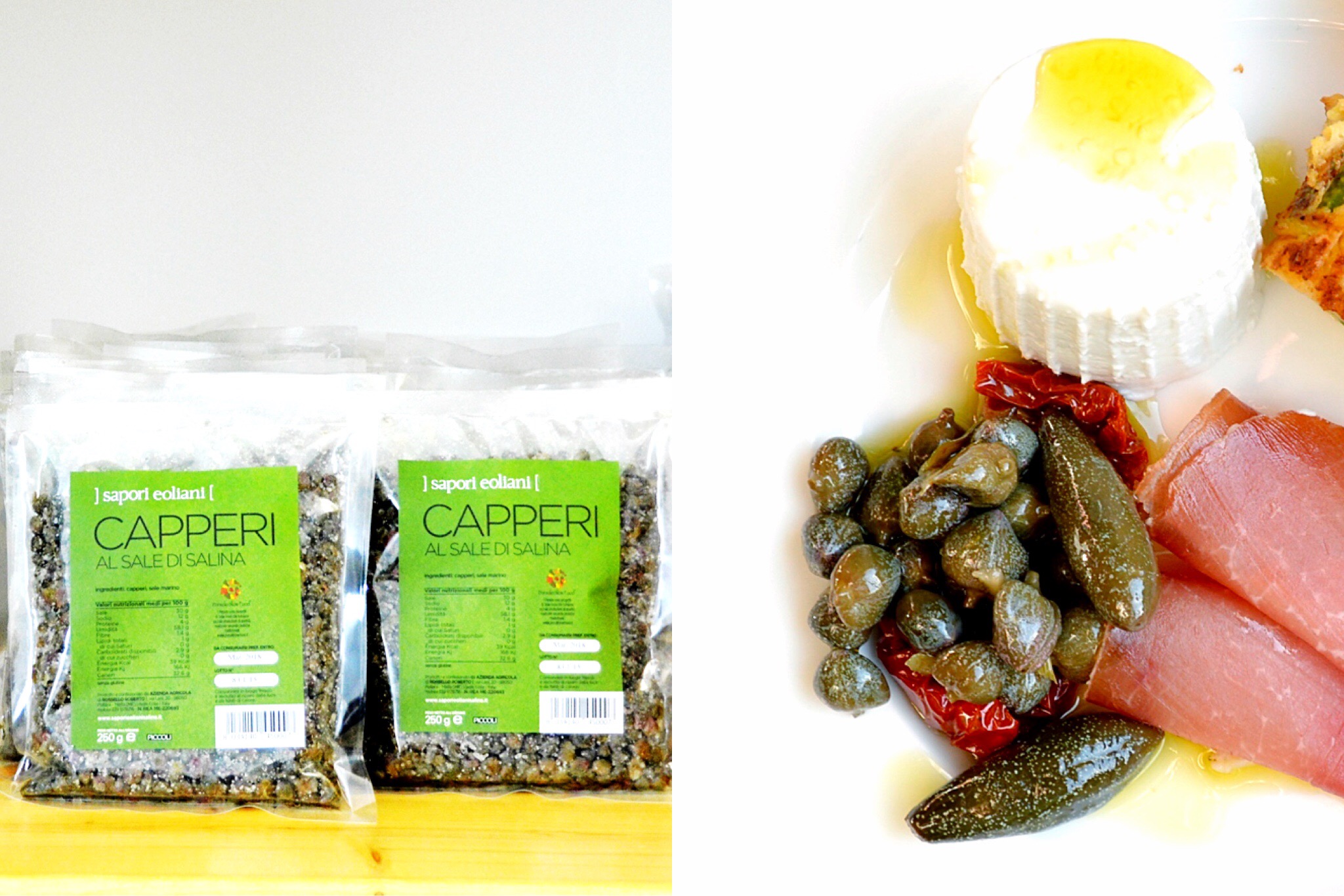 We had only eaten half of the jar of the antipasto when we left Salina to catch a plane to continue our holiday in Malta. There was no way I was going to leave the half jar behind! So I wrapped it carefully and placed it in my hand luggage (much to Mark’s horror), knowing full well that it was going to get confiscated at the airport. After all, it was a jar of open food in oil (and there are rules about liquid in hand luggage). Unsurprisingly I was stopped by security at the airport and my bag was searched. Lo and behold they found the open jar of Antipasto Eoliano. A couple of security staff milled around to have a good look at what they had found, and after reading the label on the jar, they opened it and looked at me suspiciously and asked “sono buoni?” (Are they any good?). “Buonissimi”  I replied, “i capperi più buoni del mondo” (the best capers in the world). They smiled, nodded and gave the jar back to me. Ahhh, one of the reasons I just love Italy – they don’t let rules get in the way of good food. 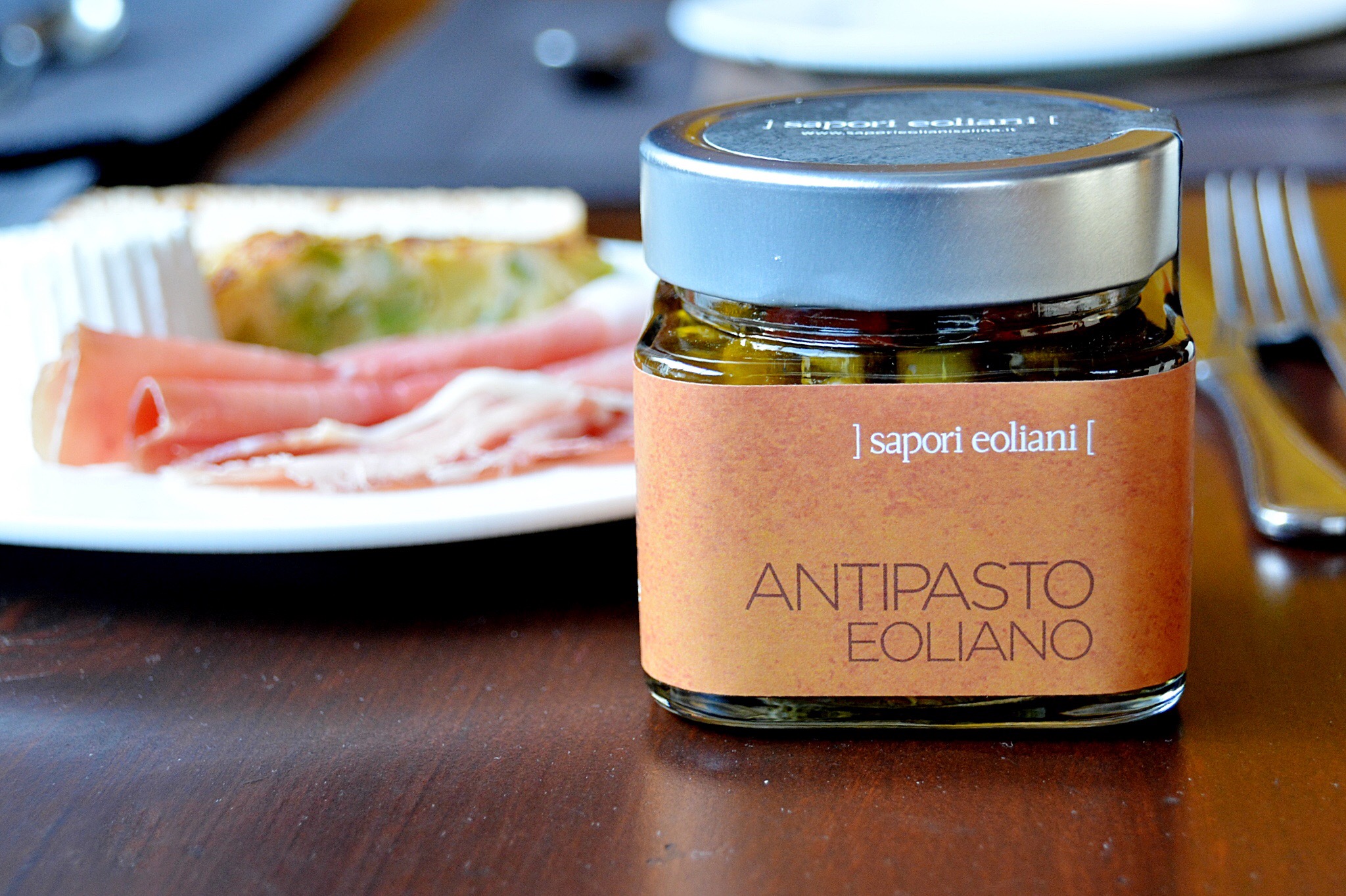 We had such a brilliant time in Salina. A huge thanks to the wonderfully accomodating staff at Hotel Signum, to Roberto from Sapori Eoliani and to the taxi and bus drivers on the island, with whom I struck up many conversations, and who all seemed to have a relative or friend living in Australia.

NEWS: Roberto Rosselli from Sapori Eoliani sadly passed away in November 2015 in a tragic motorbike accident on Salina.