Every weekend I visit John at the “Tomato City” stall at the Victoria Market. The other weekend he said to me “vuoi una cassa di pomodori per fare secchi in forno – solo 10 dollari?” (do you want a case of tomatoes to dry in the oven, only 10 dollars). It was on the morning of the day that I was going to be making passata at Bar Idda, so I had to consider whether I would be in tomato overload. John must have seen my look of uncertainty as he gave the box to my husband. “Tuo marito ti puo’ aiutare” (your husband can help you). I looked at Mark, who did not understand what John had said and then smiled “Si certo John” (of course). Mark looked at me quite baffled, wondering what this enormous box was for. Now it’s not that my husband doesn’t help me – he does a lot around the house – but none of it is in the kitchen. His best effort at cooking is what he calls “man pasta” (pasta with a tin of tuna in olive oil thrown on top). I must admit to shoo-ing him out on more than a few occasions when he was hovering, trying to work out how to help. I had never dried my own tomatoes so I looked forwards to the challenge of tackling the 10kg box of slightly dried out tiny tomatoes myself after my morning passata making session. 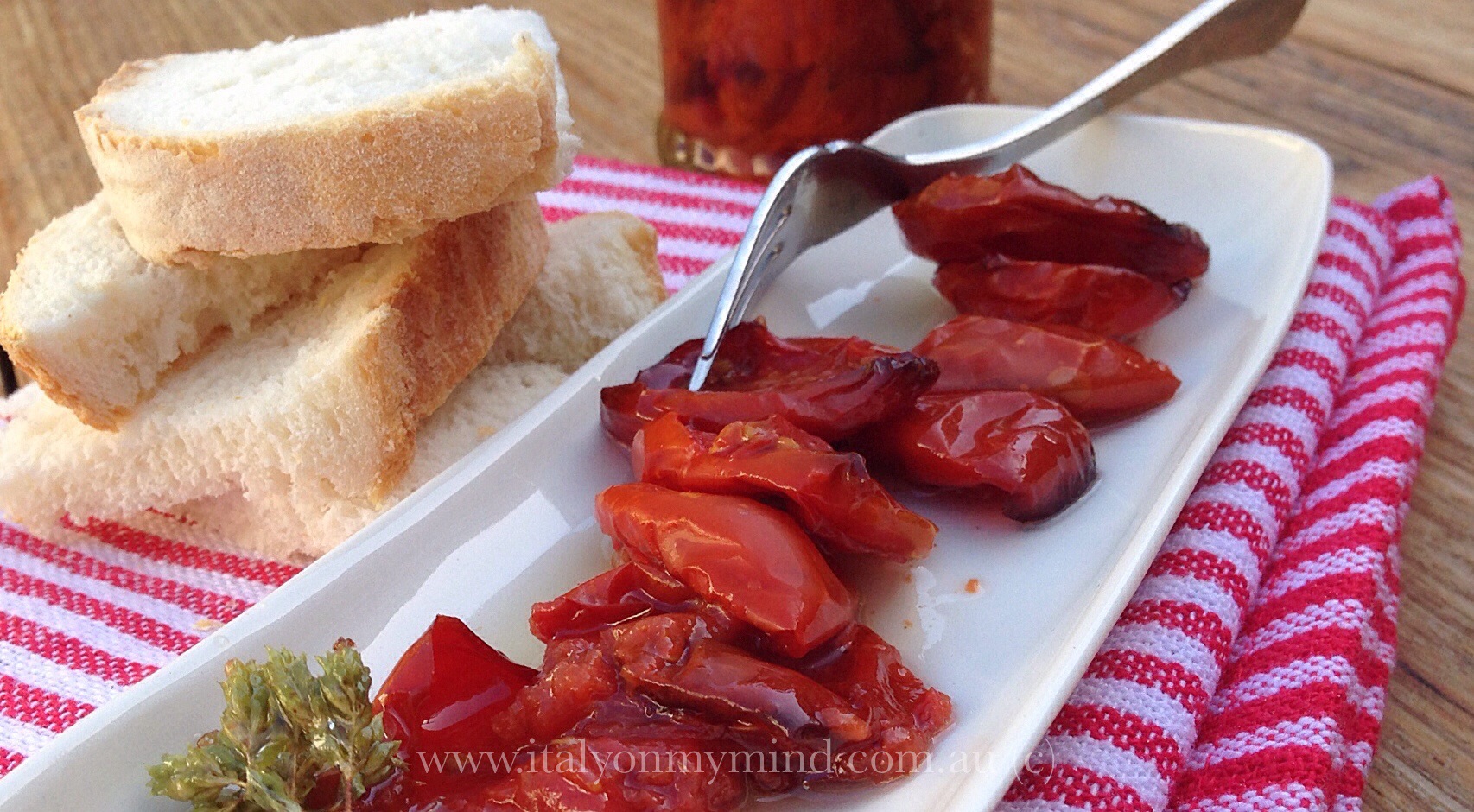 Mamma used to make oven-dried tomatoes. My father would help her and they would use the excess of tomatoes they had grown to make soft oven- dried ones to last them through the winter. It was a task that took at least half a day. He was rather possessive about these jars of oven-dried tomatoes in oil – mamma would always give me food she had made to take home (just as pesto, meat sugo, jars of jam and the jars of tomatoes) after I had lunch with them on a Sunday. Papa’ would say “mostrime cosa la te ga dado per portar a casa” (show me what she gave you to take home) in dialect, peering in, making sure I only had one jar of the tomatoes. “Che fortunada che ti son” (how lucky you are) he would comment as I walked out the door to the car with my basket of home made supplies. He loved eating the oven-dried tomatoes on pasta with a bit of the olive oil drizzled on top and some parmigiano , but he wanted them to last through until next season, so he didn’t want me to take too many of them home. 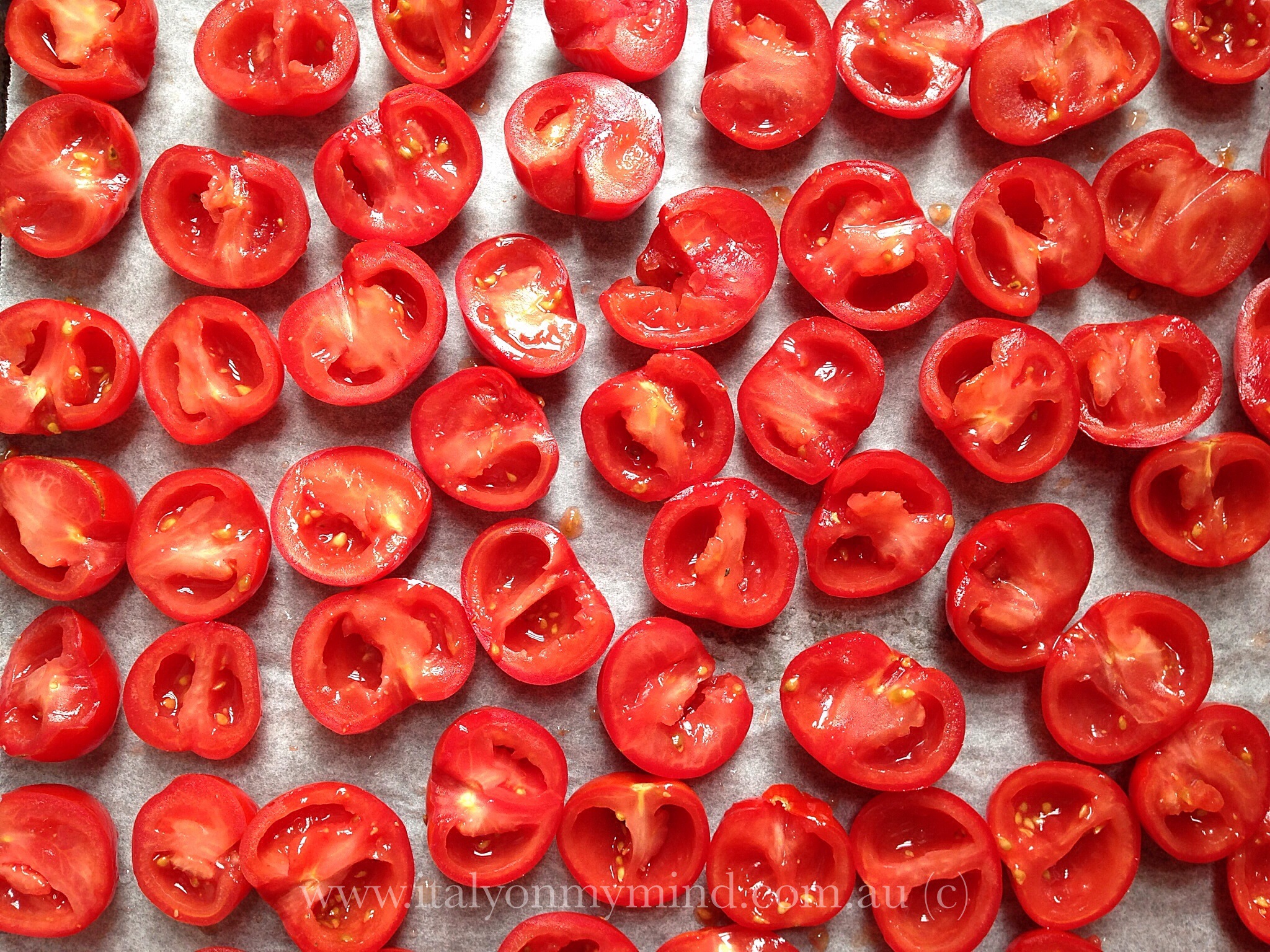 The great thing about drying your own tomatoes in the oven is that you can leave them quite fleshy and then marinate them in the best olive oil. They taste so much better than anything you would buy. It does take time – depending on the size of the tomatoes and how much you want to dry them out – but there is something every special about the oven dried tomato ritual . And it is so delicious and simple. I think that I am very lucky, like my papa’ kept telling me, having these vivid memories of him and my mother in the kitchen, preparing food with love. I am so happy that John convinced me to buy the tomatoes as I know this is a tradition I will continue at the end of every tomato season. I hope this is something you will try as well. Eat them as they are or with some bread to mop up the delicious oil. You can experiment with different herbs (eg. basil) and they are great as a quick meal with pasta. 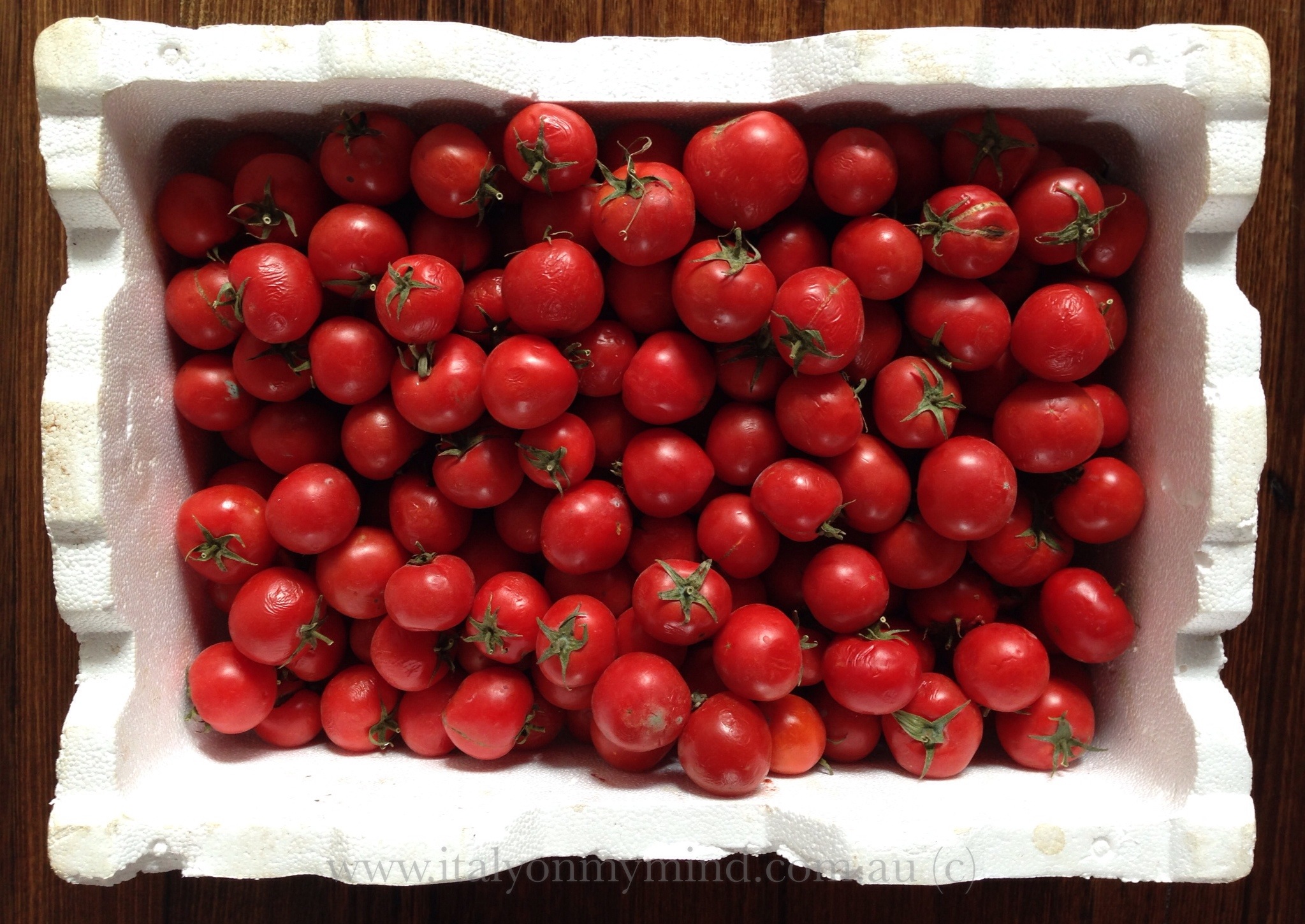 Oven- dried tomatoes
Small ripe tasty tomatoes, as many as you like
sea salt
good quality extra virgin olive oil
bunch of dried oregano in florets
Wash the tomatoes and discard any that are too soft or mouldy. Cut in half, core and remove the seeds. Place cut side up on an oven tray that has been lines with tin foil. Don’t crowd the tomatoes on the tray. Scatter on some sea salt (1 teaspoon per tray; my tray had 70 tomato halves on it) and some oregano. Place in a preheated 120 degrees Celsius oven. They will need to cook at least 1.5 hours (up to 4 hours depending in the size of the tomatoes and degree of dryness). Prepare another tray of tomatoes in the same way until you have the desired quantity. Rotate the trays in the oven every 30 minutes as the uppermost tends to dry out faster.

When the edges of the tomatoes are dry but the centre is still fleshy, they are cooked. Remove them from the oven and cool them on wire racks.

If you are going to preserve them you will need some sterile jars. Wash and dry the number of jars and corresponding lids you need and place in the oven at 120 degrees, upside down in a wire rack for about 30 minutes (I did this when I had enough room in the oven after most of the tomatoes had cooked).

When the jars become cool enough to handle, layer on the cooled tomatoes. Don’t overfill. Add a bit more oregano and then pour in enough olive oil to fill the jar to the brim. Tap to remove trapped air bubbles.

I keep my jars of tomatoes in the fridge. They can last many months. When I am part way through a jar, I top it up with more olive oil to preserve them better. The left over oil is delightful on salads or bread. 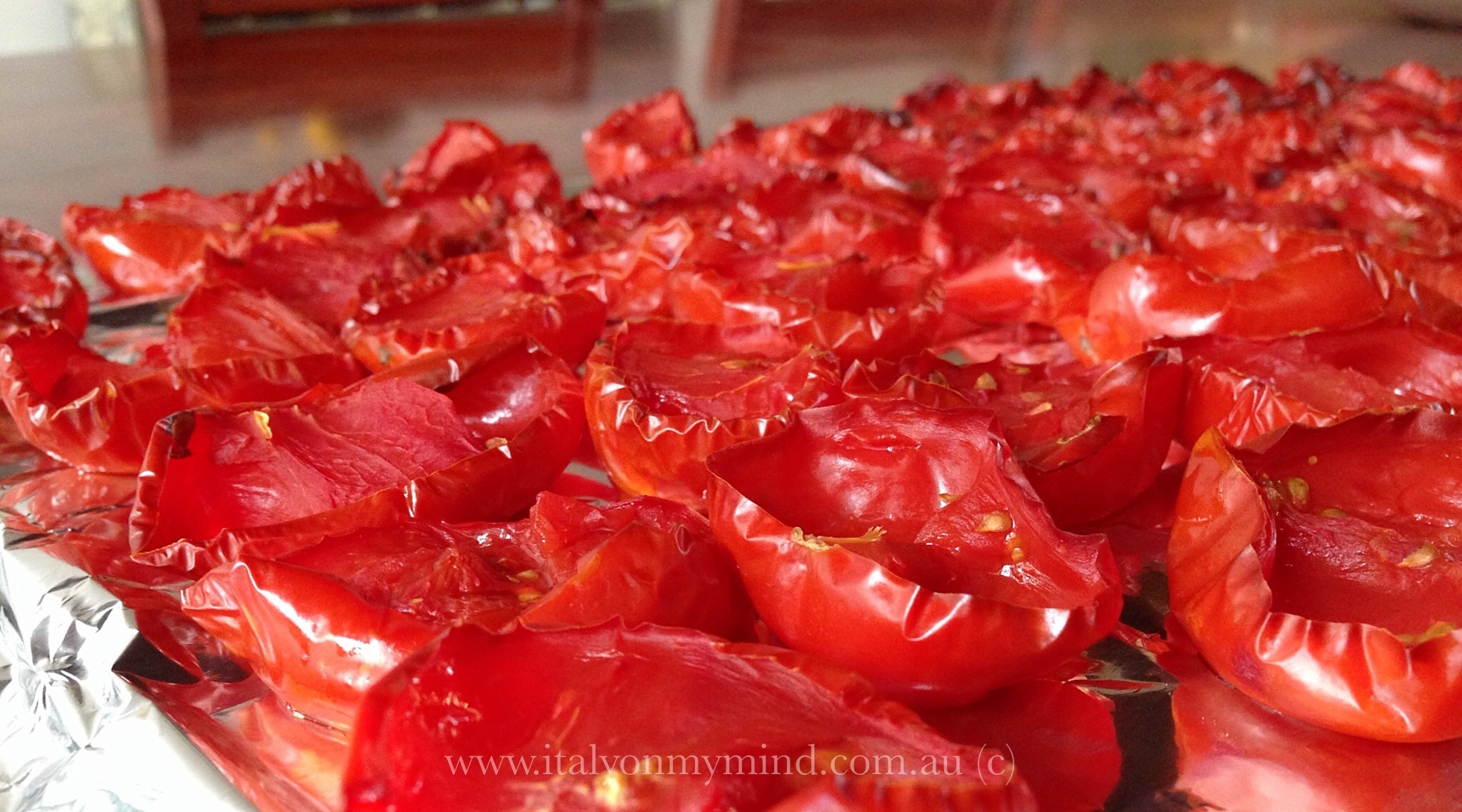 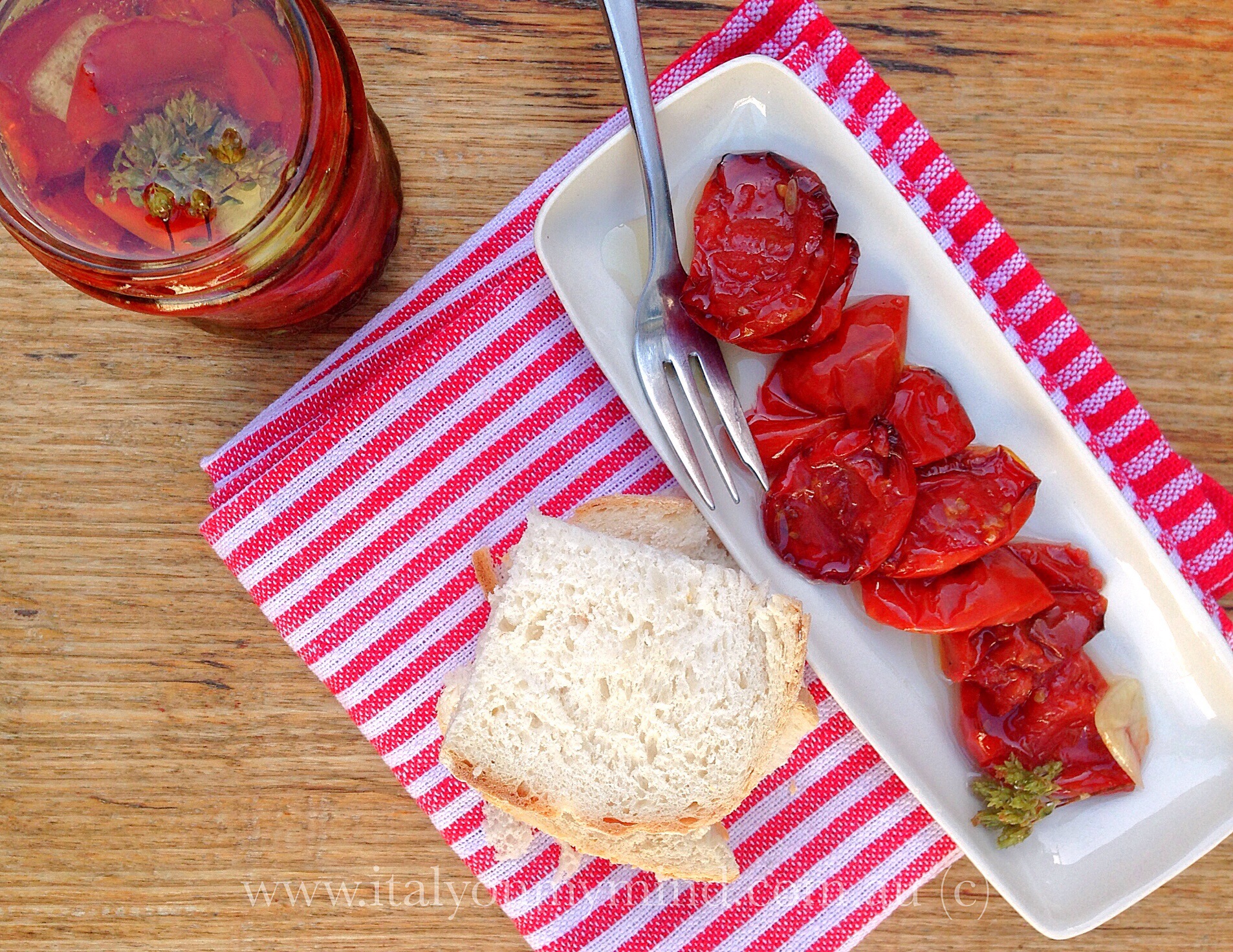