By italyonmymindSeptember 2, 2013Blog, food and travel, other Europe I managed to get the last available spot on the Culinary Secrets Old City tour in Istabul last week. The tour only has seven participants (keeping it small and intimate as some of the places we went to were tiny). The photo below is of the part of the group as we walk through one of the streets beyond the old city. 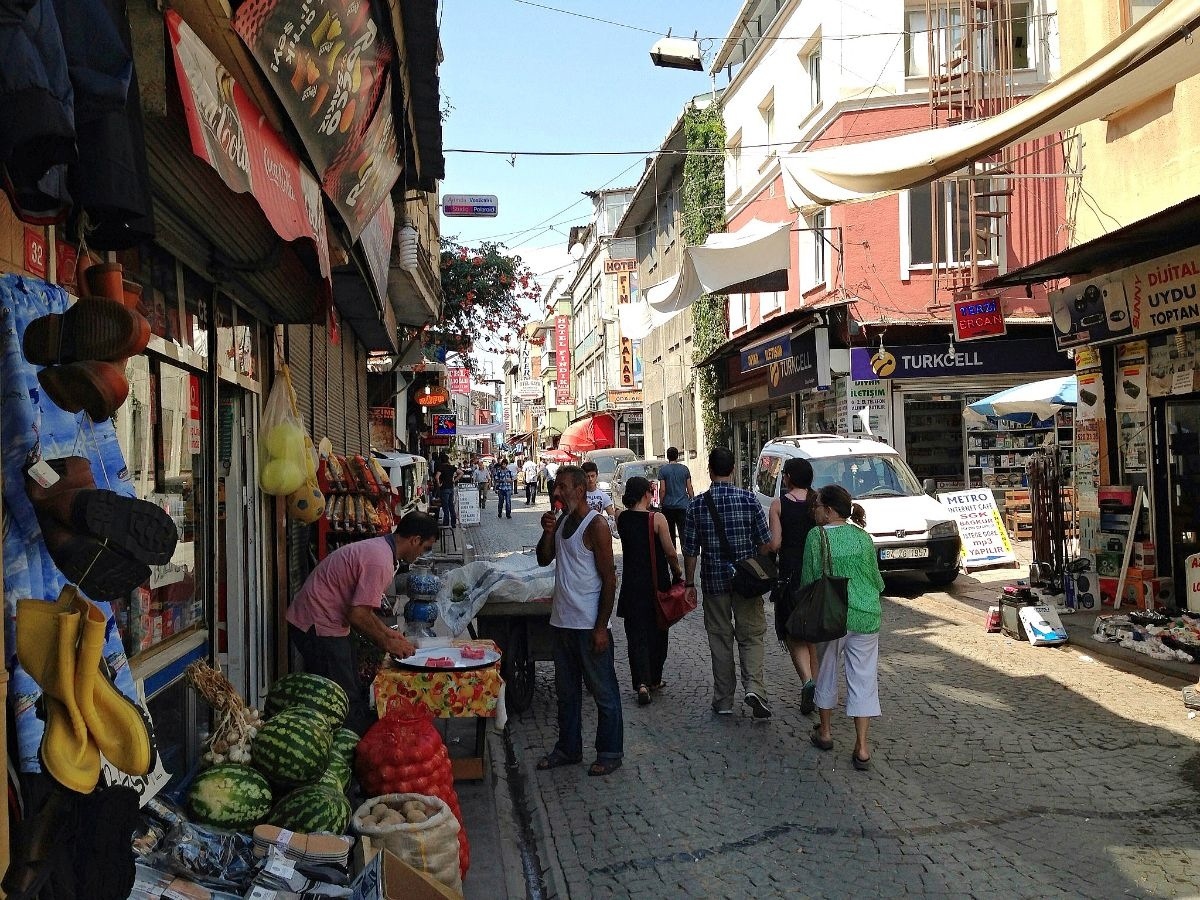 We started off outside Hamid restaurant near the old spice market and Connie, our lovely German born guide took us to her favorite food vendors for cheese and olives so we could have a traditional Turkish breakfast. 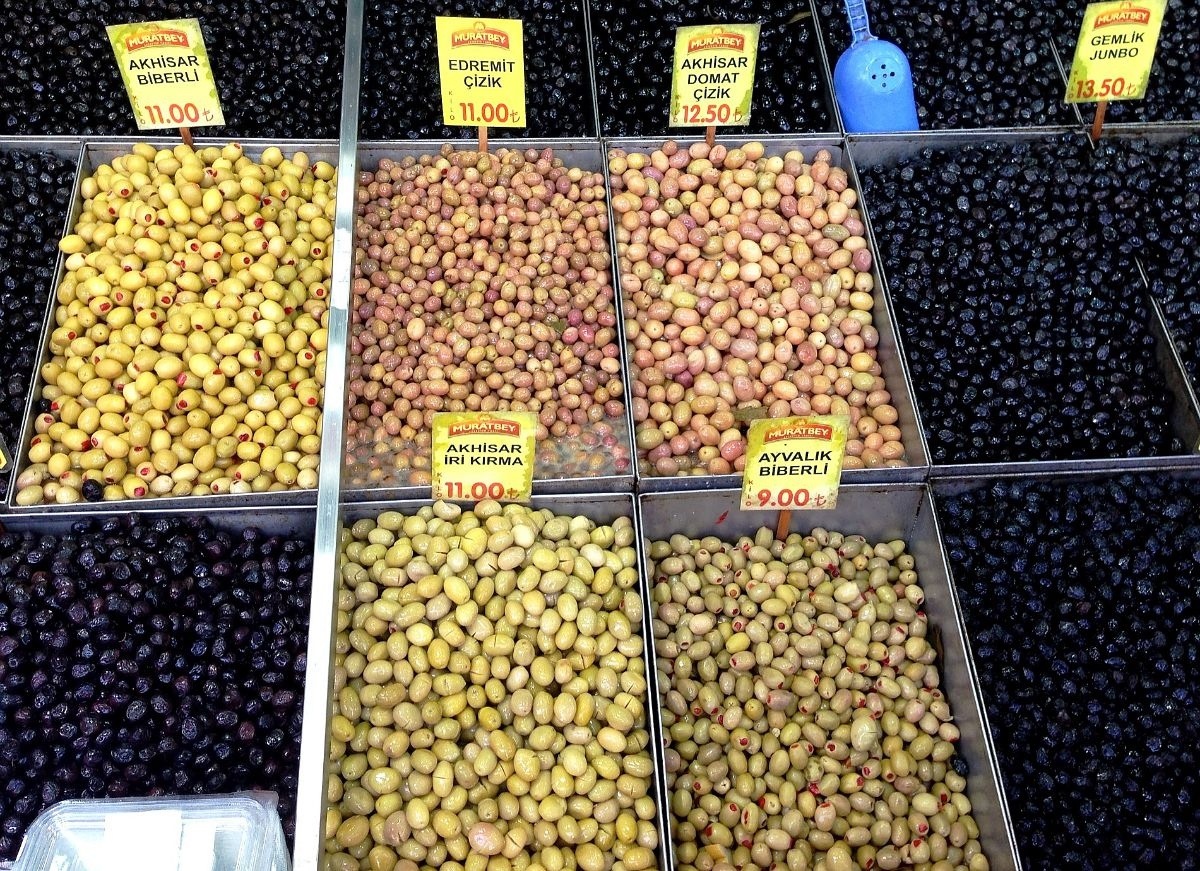 First stop was a workman’s coffee and tea shop, which was inside a warehouse to have breakfast on a table they had set up. The coffee shop was a little recess which housed two beaming Turkish men who were busy filling orders from neighboring businesses. Young boys then delivered the coffee or tea in proper glasses and cups on silver trays – not a paper or plastic cup in sight. The cheese was served with simit, bread that lookslike a thin baked bagel and is chewy on the outside and soft on the inside. The most delicious part of the breakfast was thick clotted cream (which was a bit like a cream cheese) with honey over it. We washed it down with a cup of strong Turkish coffee. 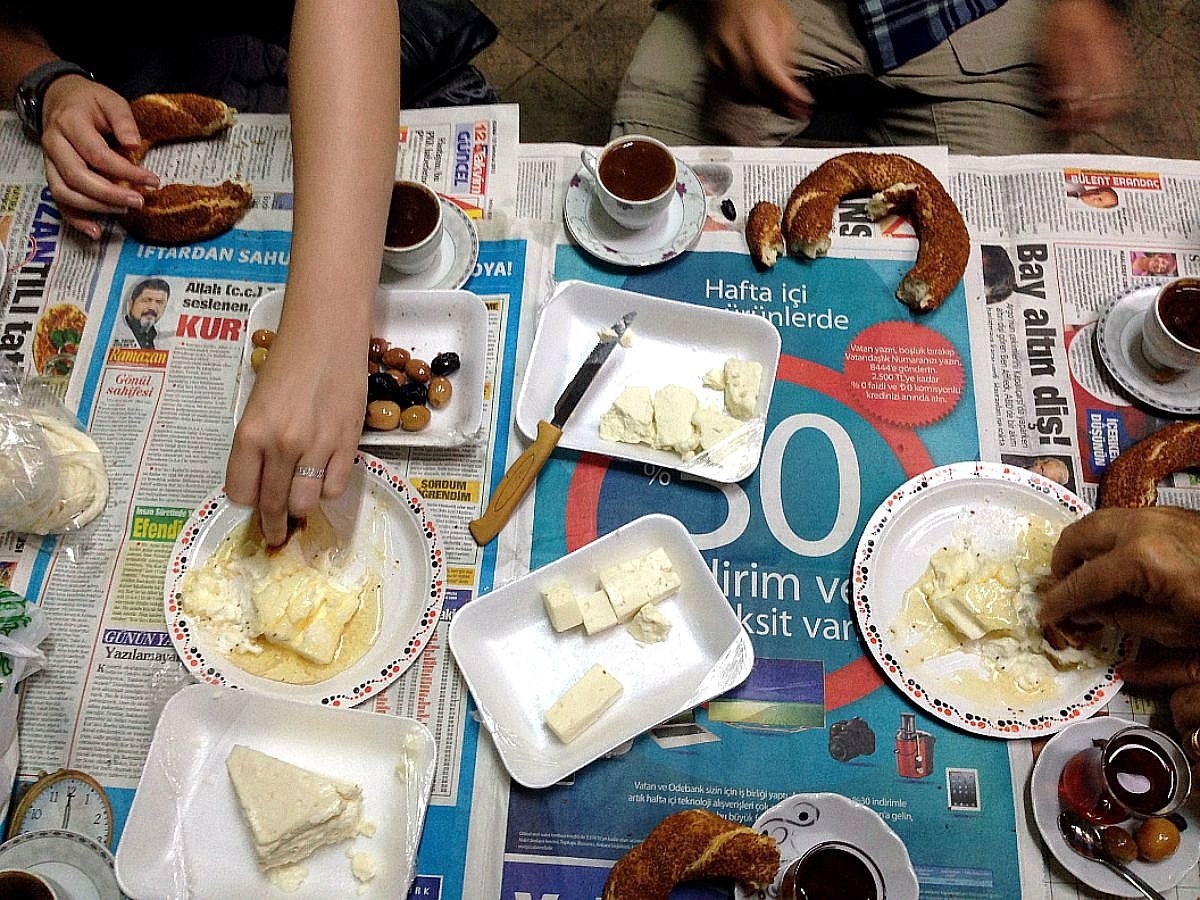 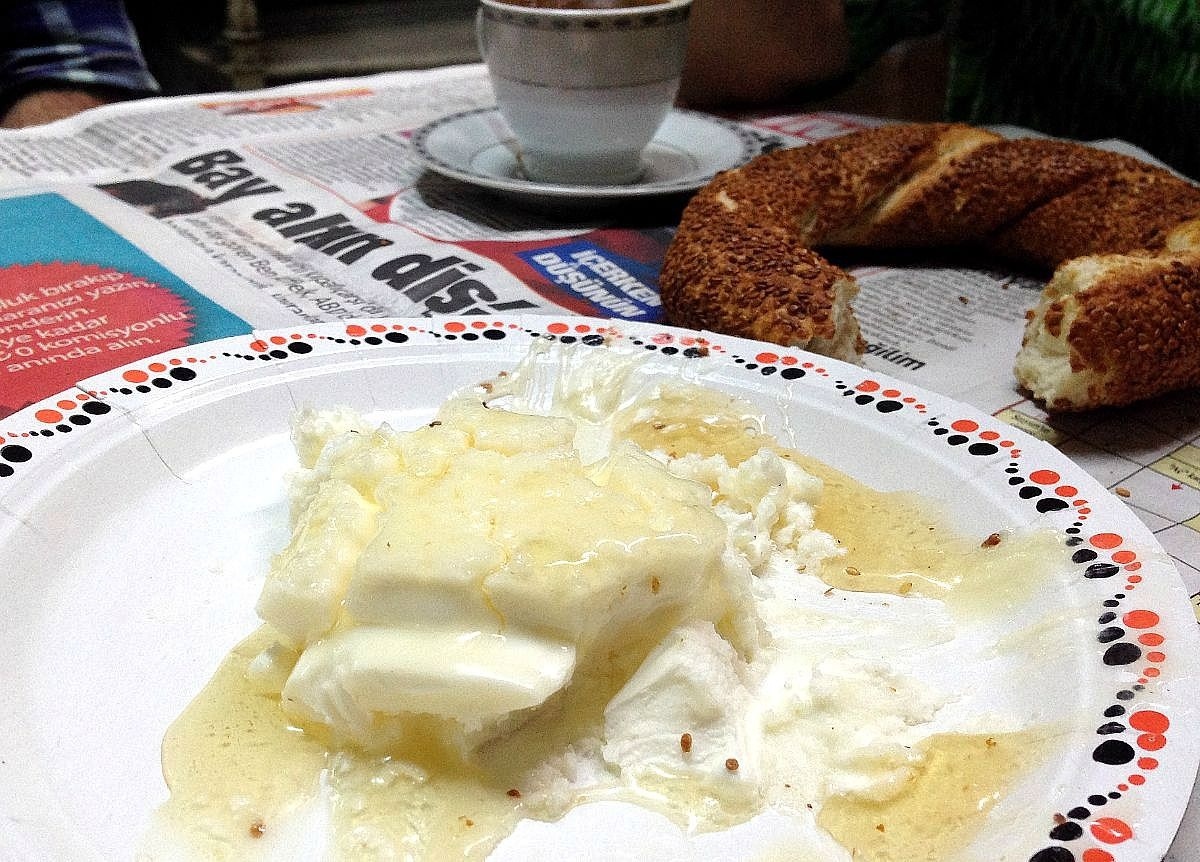 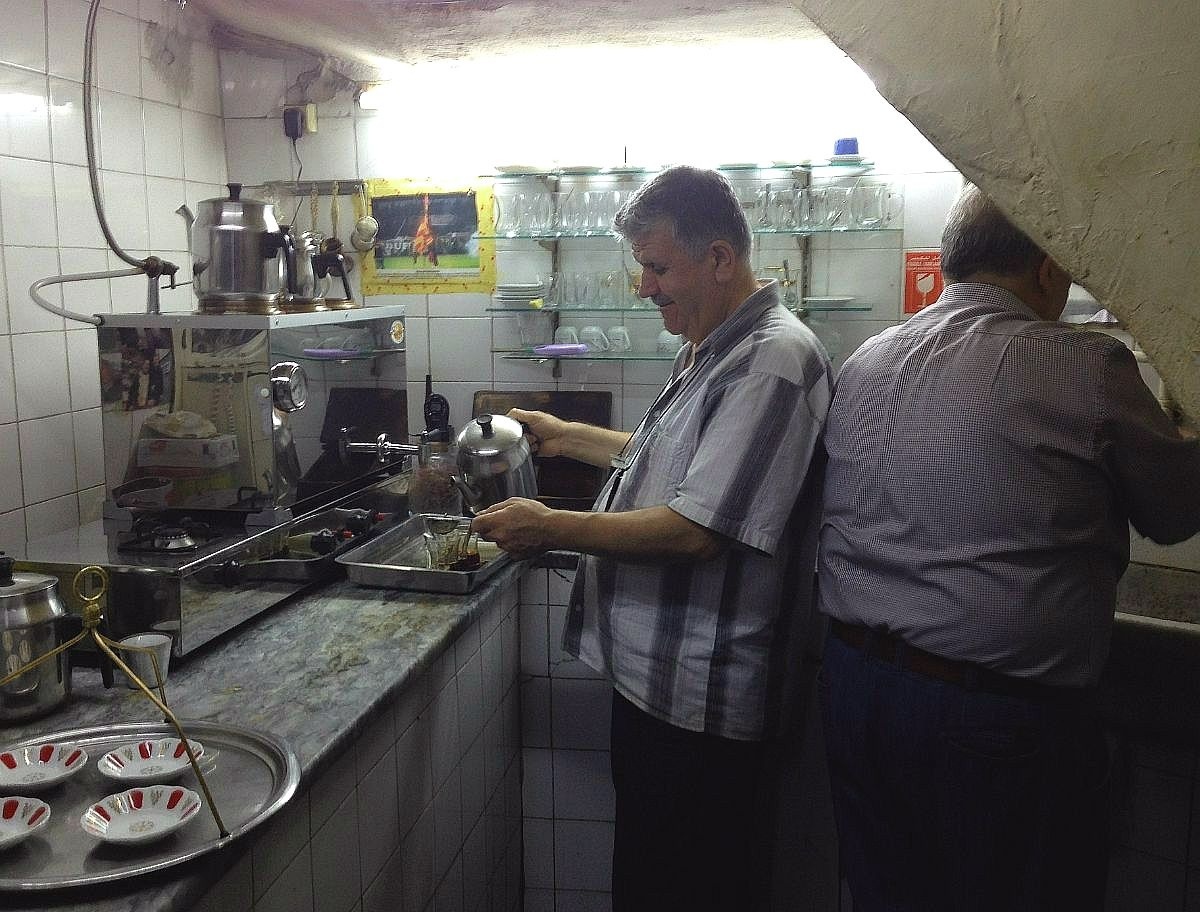 We then made our way to the old part of the city, with narrow laneways that sold everything from furniture and hardware to food. The man in the photo below is balancing dozens of simit on his head and possibly checking out the blonde girl at the same time. An impressive feat. 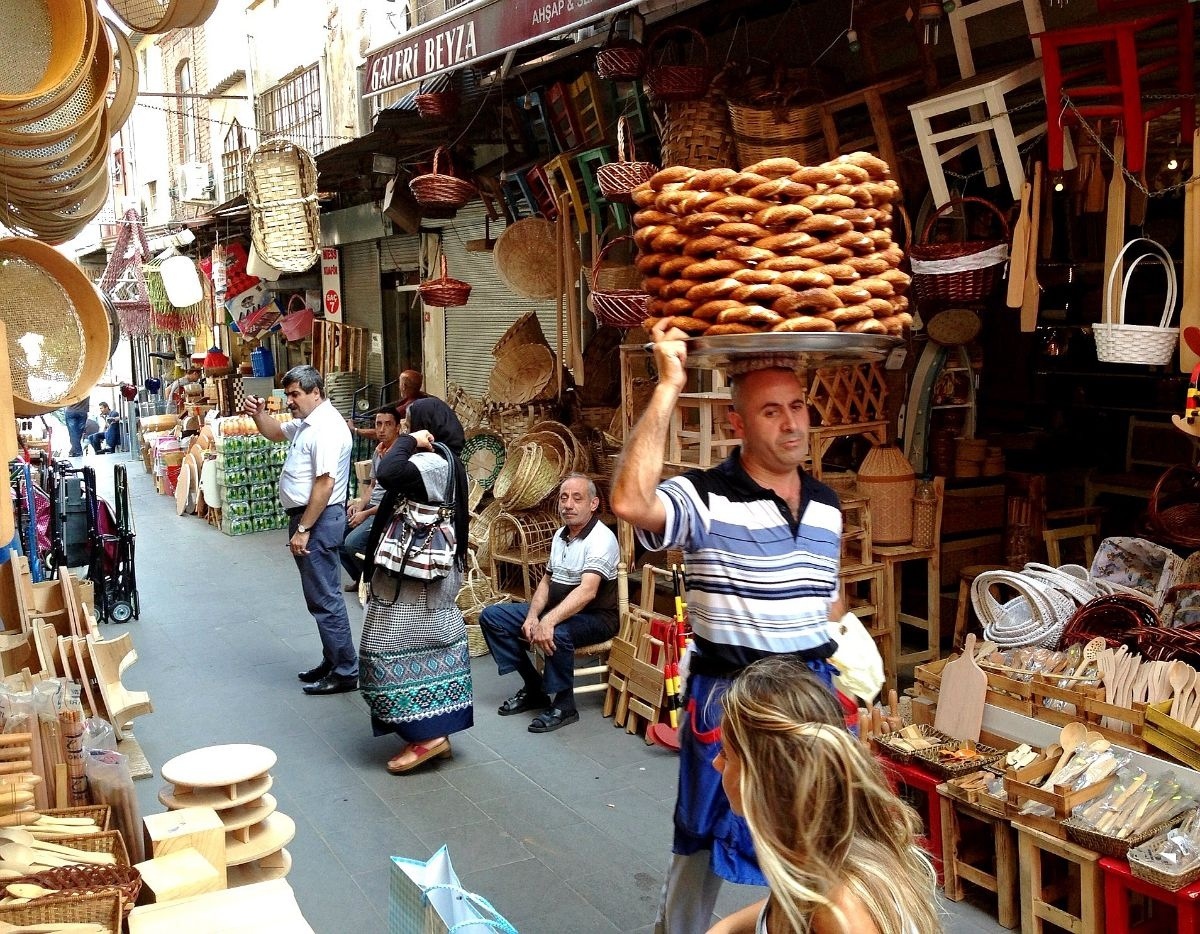 Our next stop was meant to be for some kokorec. Unluckily, the vendor was getting married that day and his friend, who was filling in, had not yet started cooking it. For the uninitiated, kokorec is lamb or goat’s intestines filled with kidney, liver and other offal on a spit. Hmmm. I saw Yotam Ottolenghi eating this in his Istanbul episode of Mediterranean Feast and I might have (maybe) been tempted to try it. 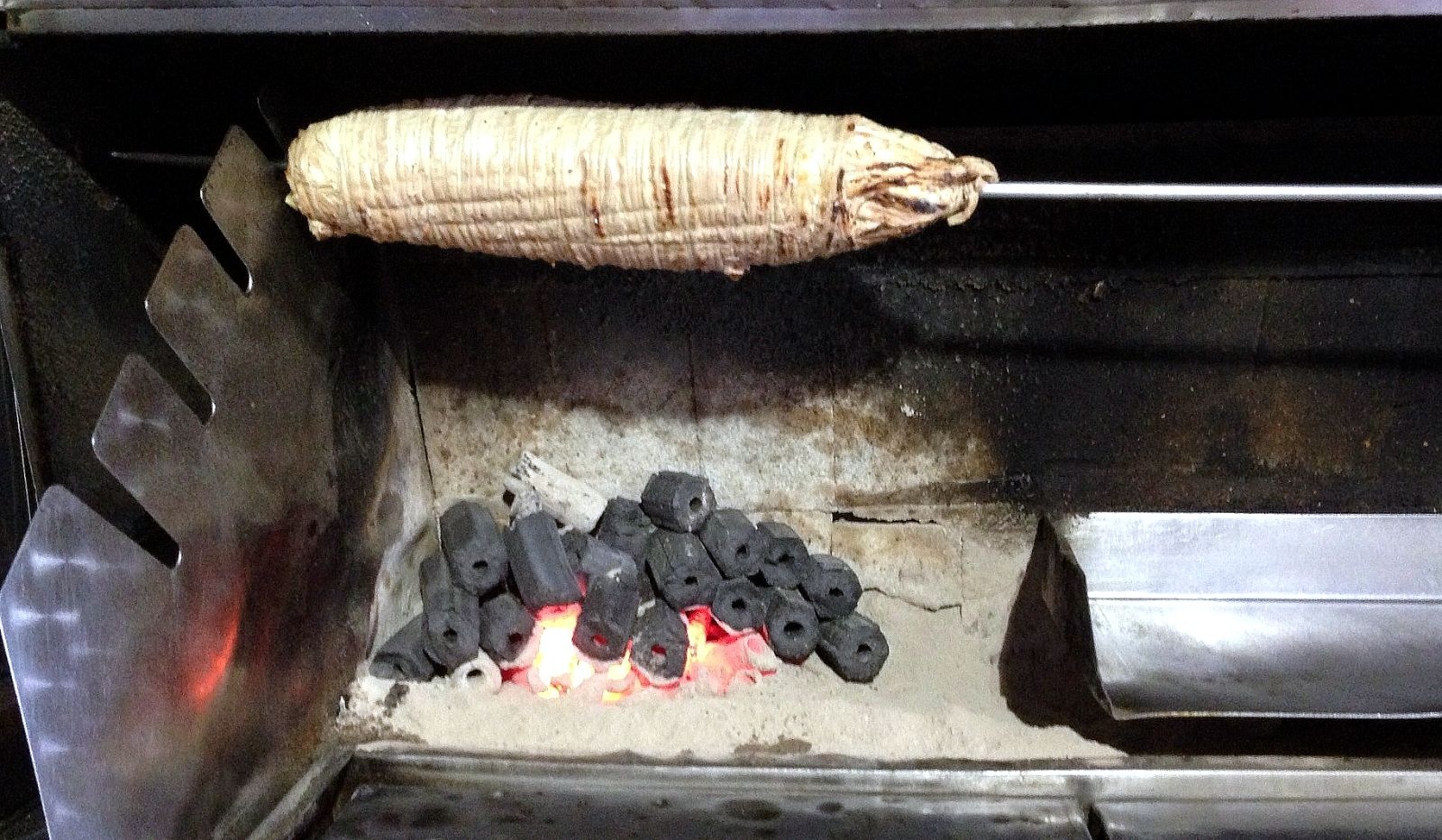 We then met the jolliest pide maker in the world. He was positively glowing as he flattened the dough and put in the filling in his “Turkish pizza”. And no wonder – his pide were damn fine! 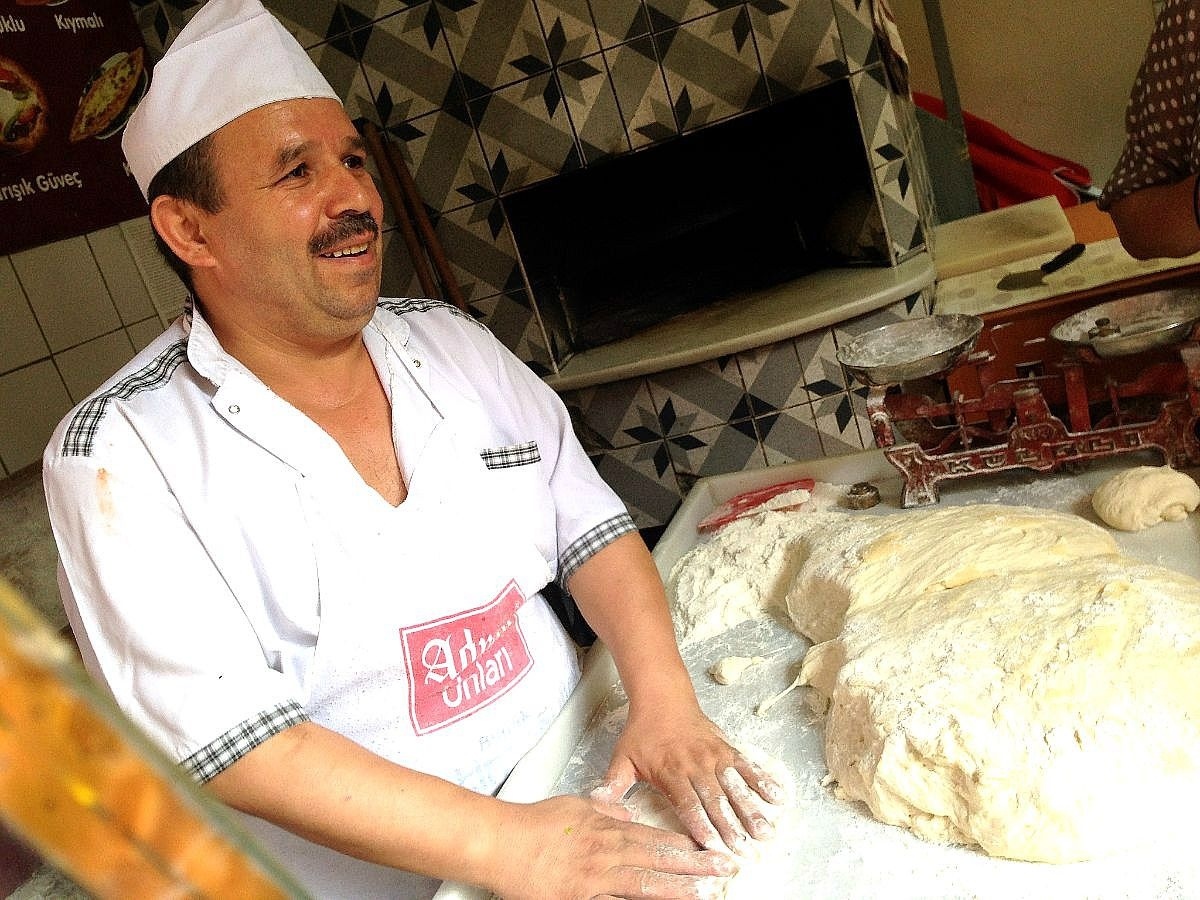 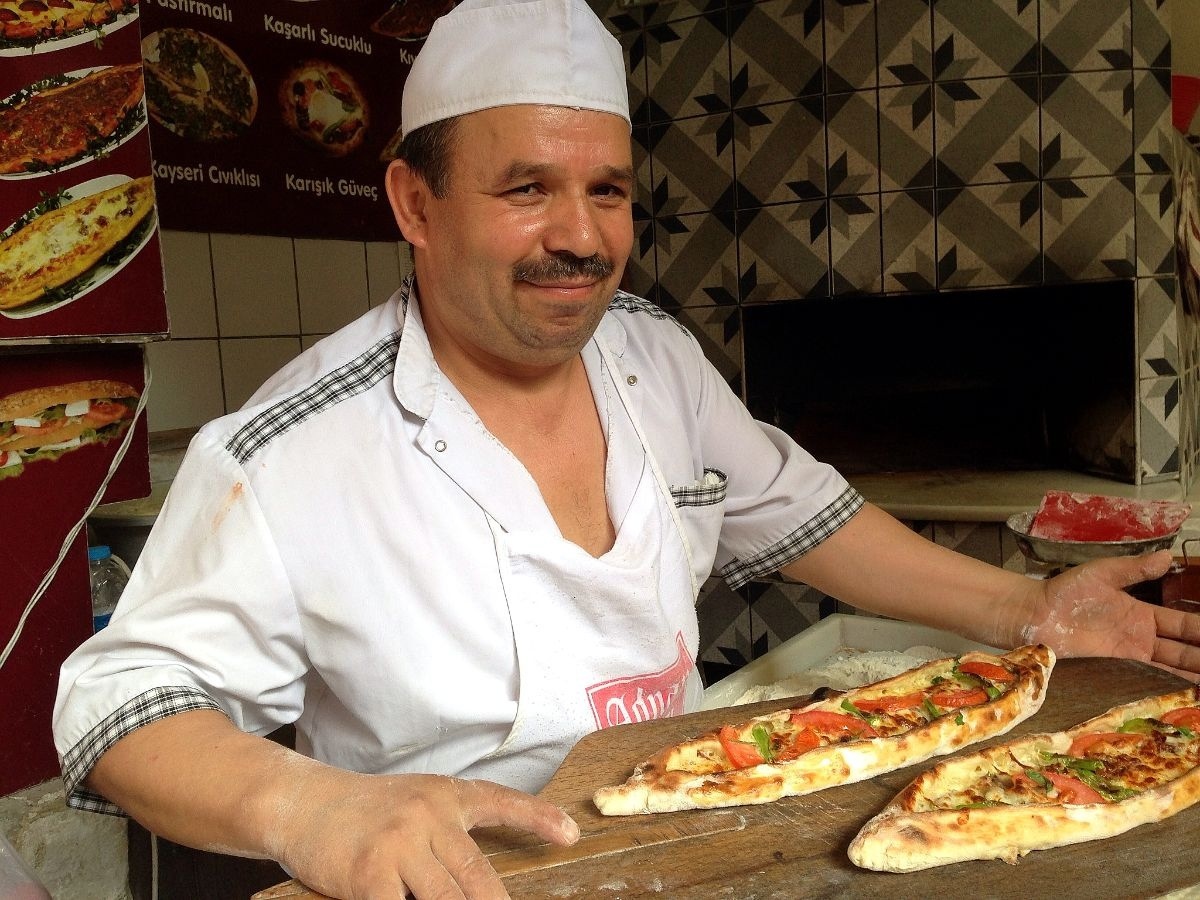 Next on the list was a pastry shop called Develi that makes baklava with 85 layers of pastry (rather than the regular 45). I thought 45 layers was plenty but the extra 40 do make a difference as it gives the pastry more texture and richness. Baklava are made every day, starting at about 2am. And they are filled with pistachio nuts (rather than the Greek version that has walnuts). Even more incredible was katmer, a savoury pastry filled with clotted cream cheese, loads of butter between the layers and was topped with pistachios – it had a hint of sweetness (possibly honey) and was to die for. There was also a vast spread of breakfast pastries on the counter which I had to photograph. 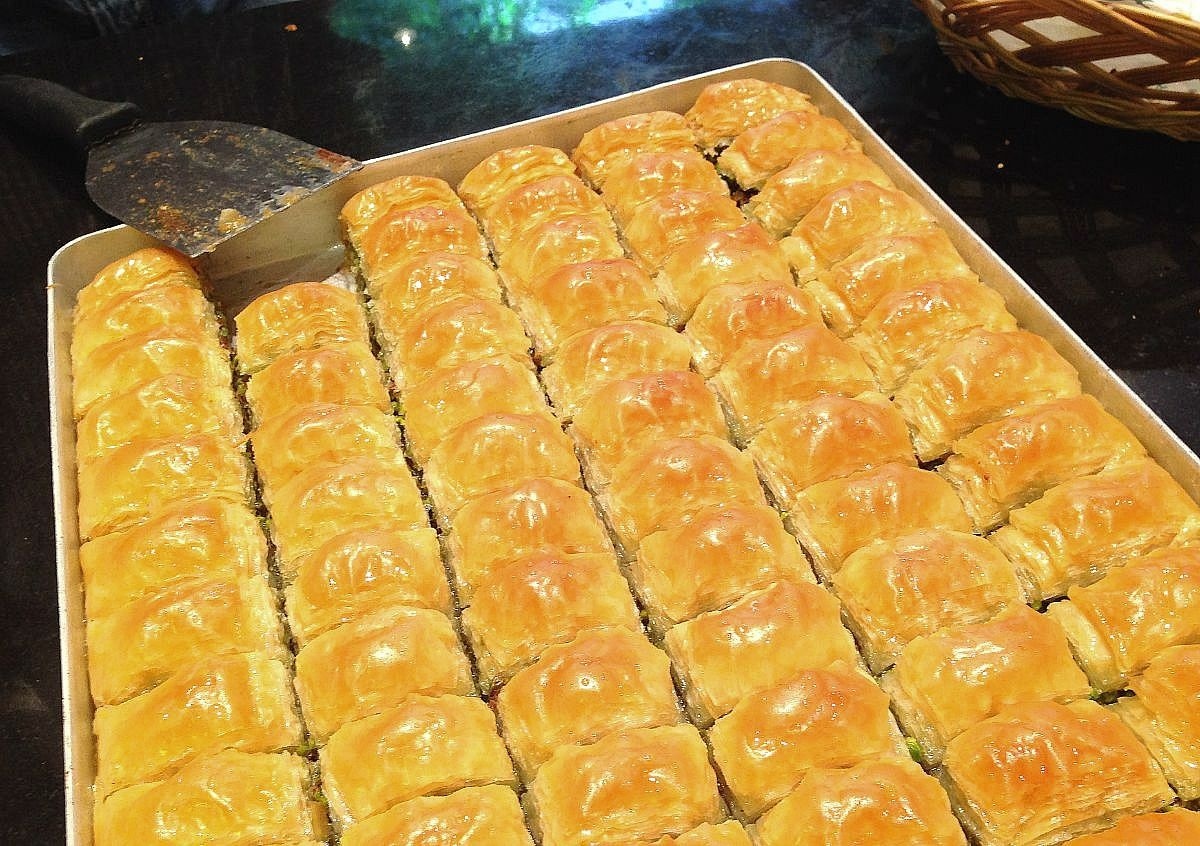 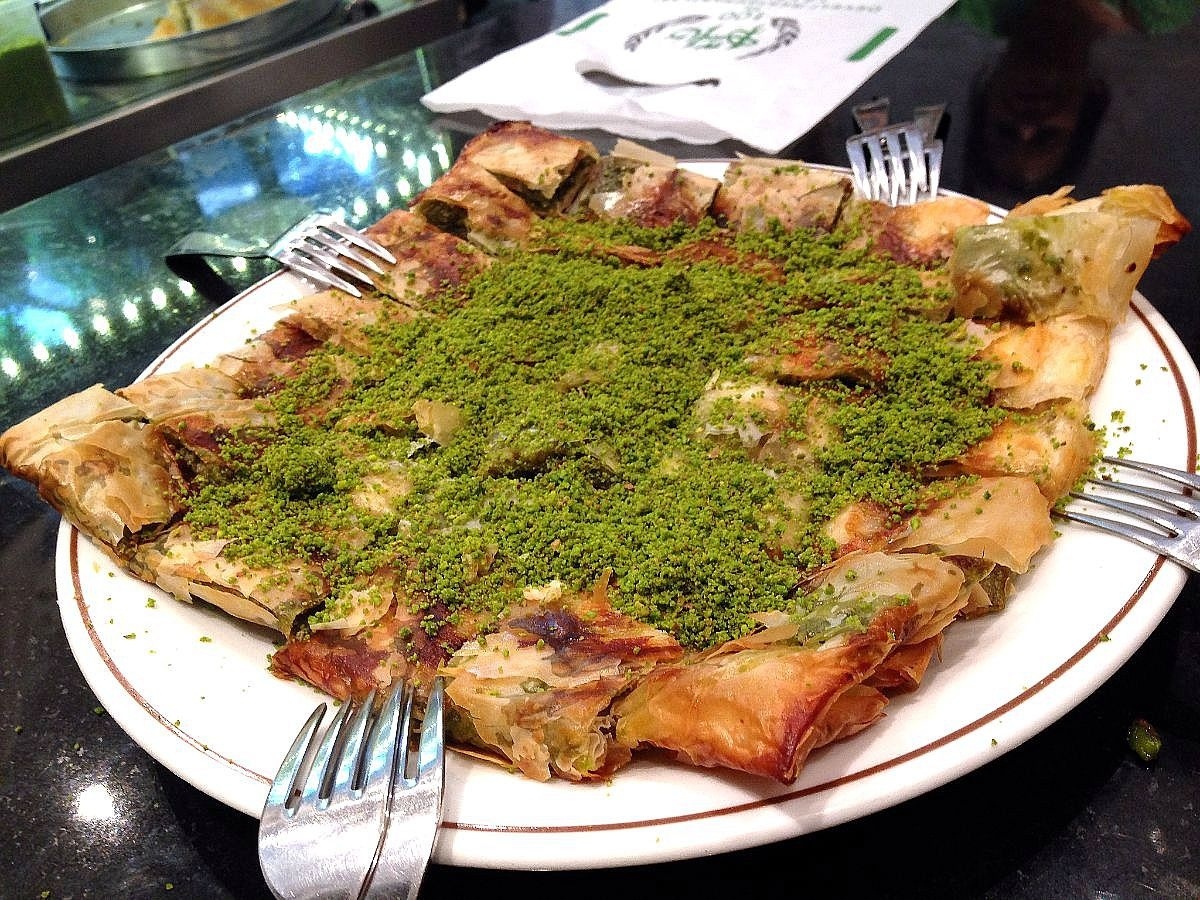 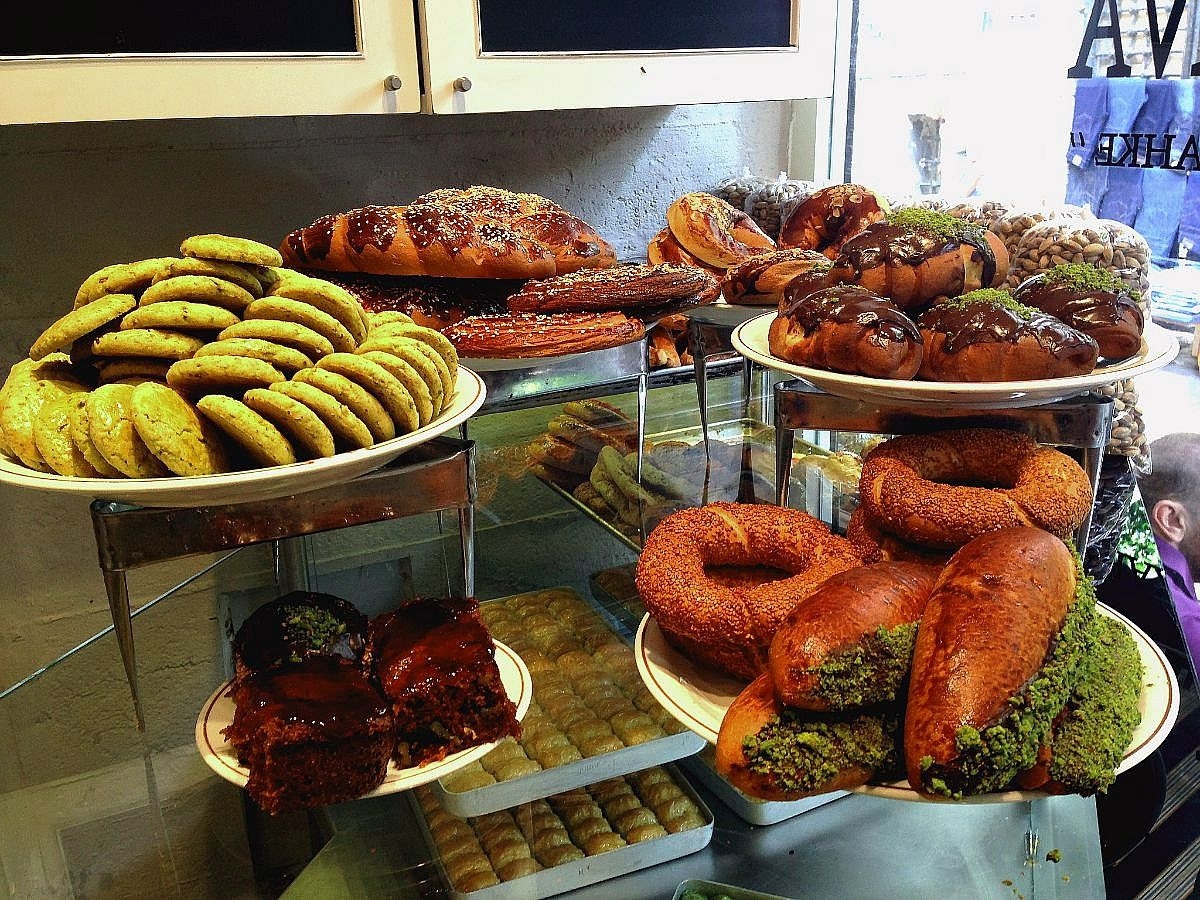 Suddenly away from the hustle of bustle of the narrow lane ways, Connie took us to an almost empty court yard where there was a shop that sold lunches for local workers. The shop had no refrigeration so what is made that morning must be eaten that day. We had some really delicious traditional lentil soup eaten with chilli and a squeeze of lemon juice. 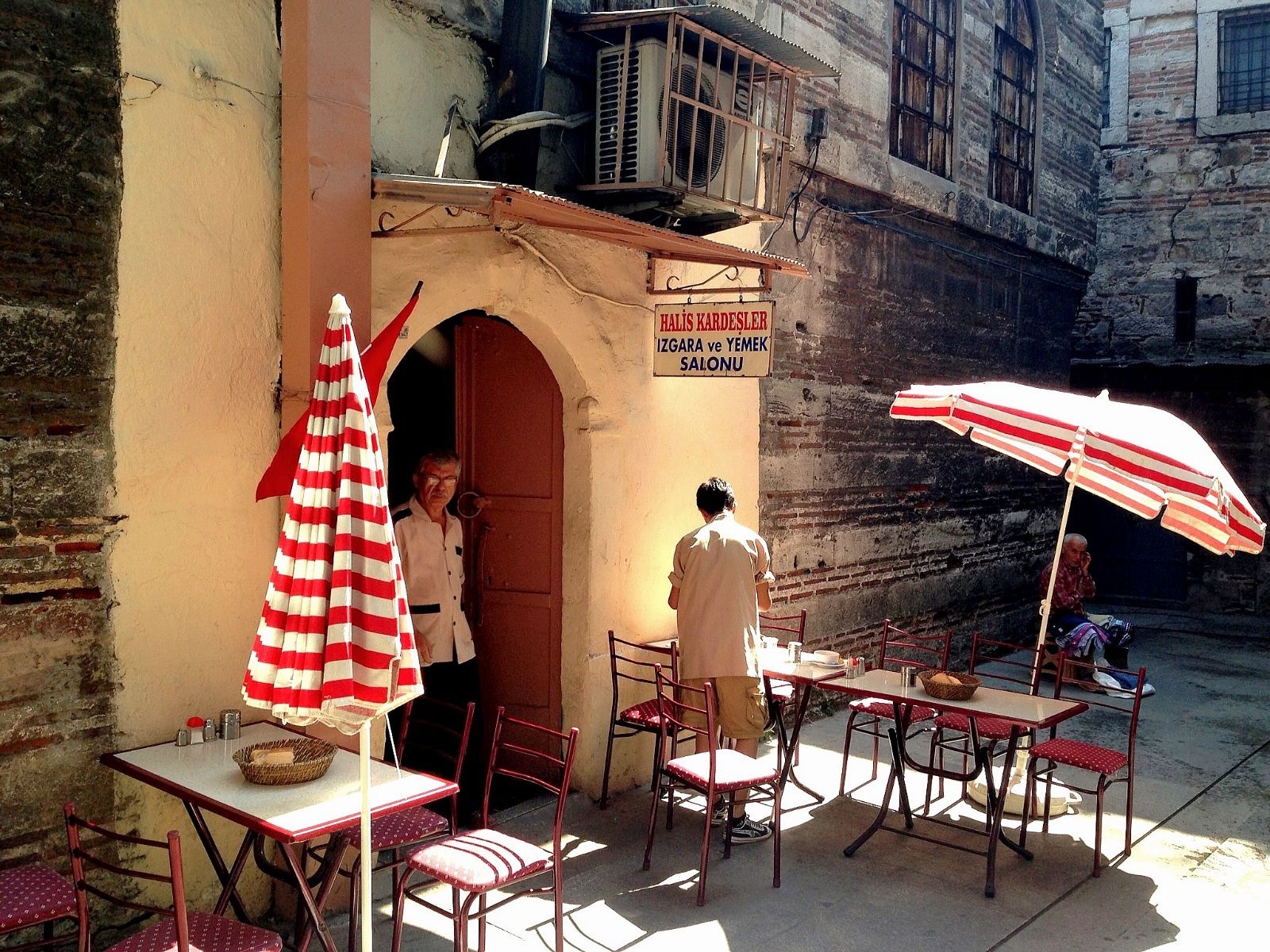 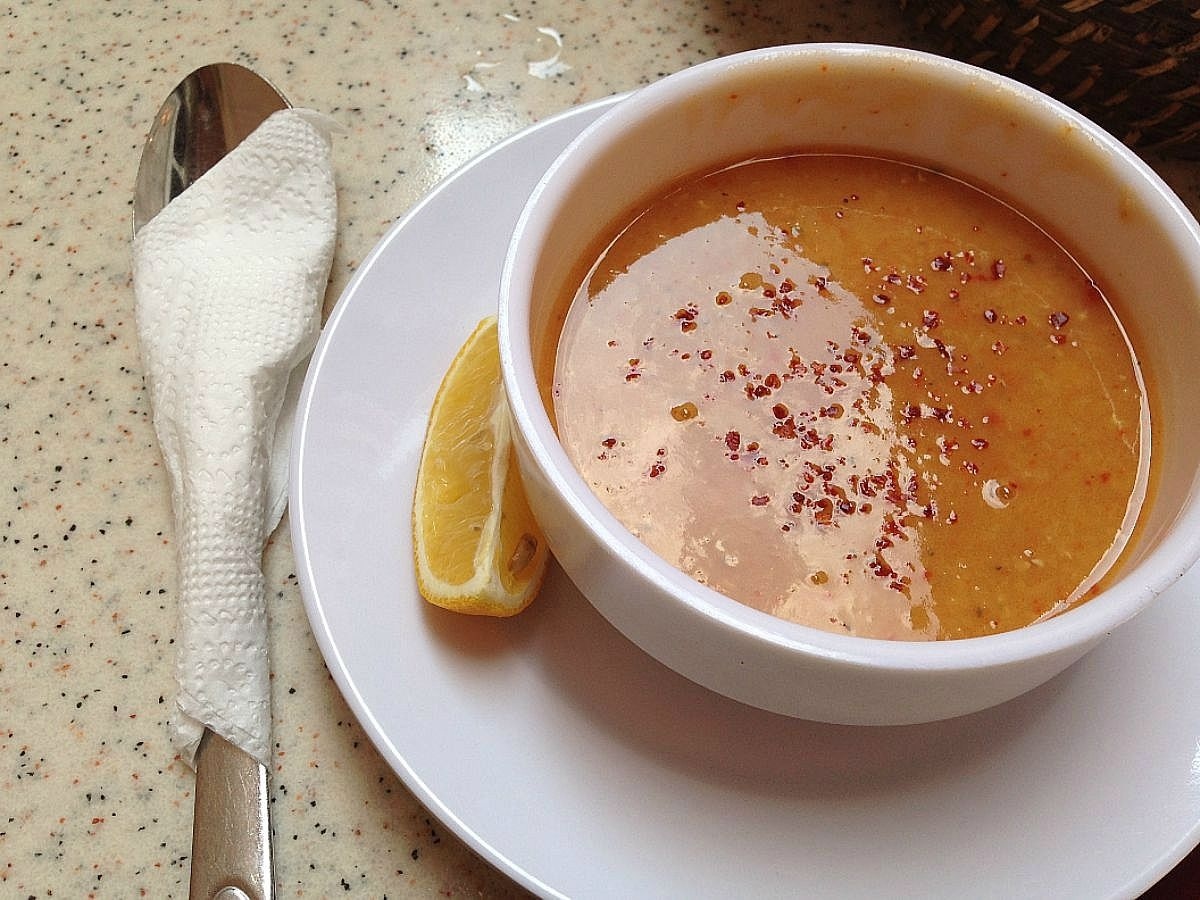 We emerged from the old city and started making our way towards the Fatih district. Our first stop was a family run sweet shop which has been making sweets since 1865. The owner, well into his 80s, was there and warmly greeted us, even though his son now runs the business. There we tasted some incredible lokum (Turkish Delight) made with rose petals. Alas I don’t think anything else will beat it and I doubt I can eat other Turkish delight – the rose was so delicate and not even very sweet. Really amazing. We picked up some halva to take to our next stop for tea. 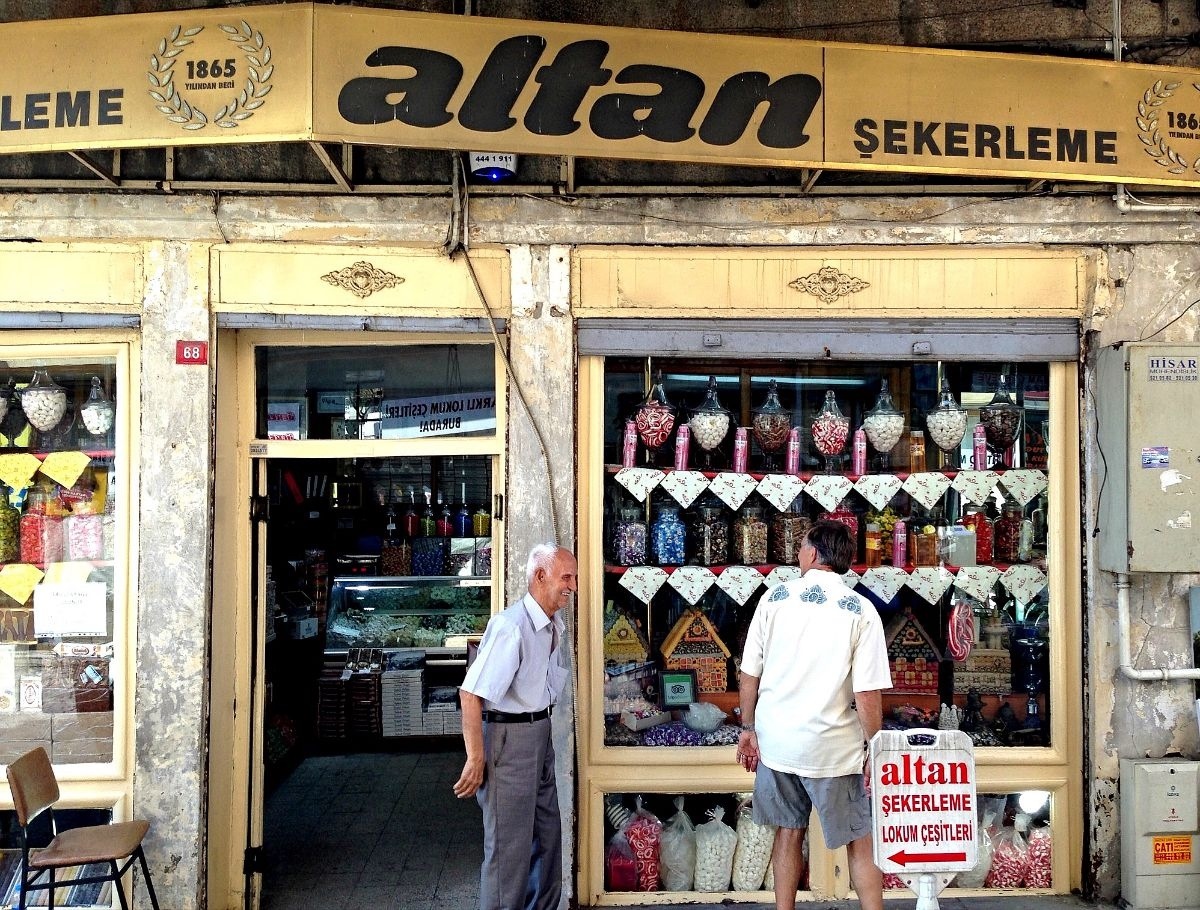 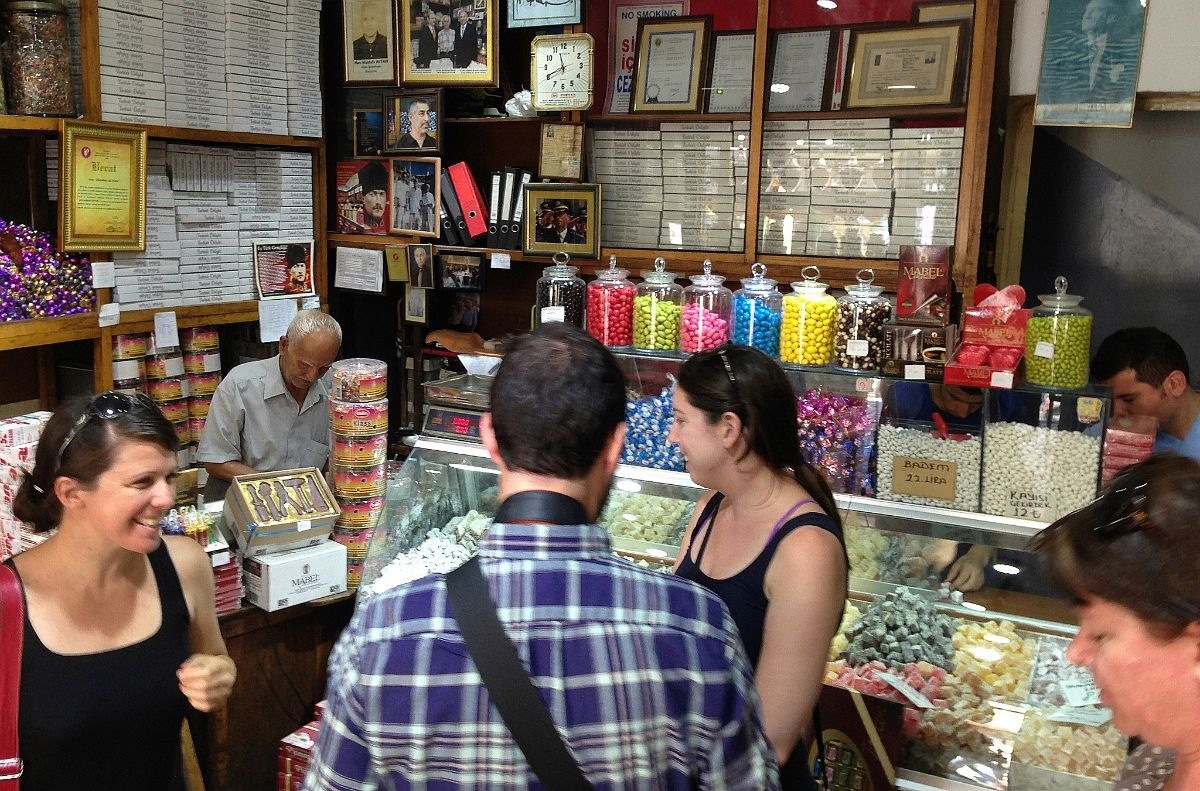 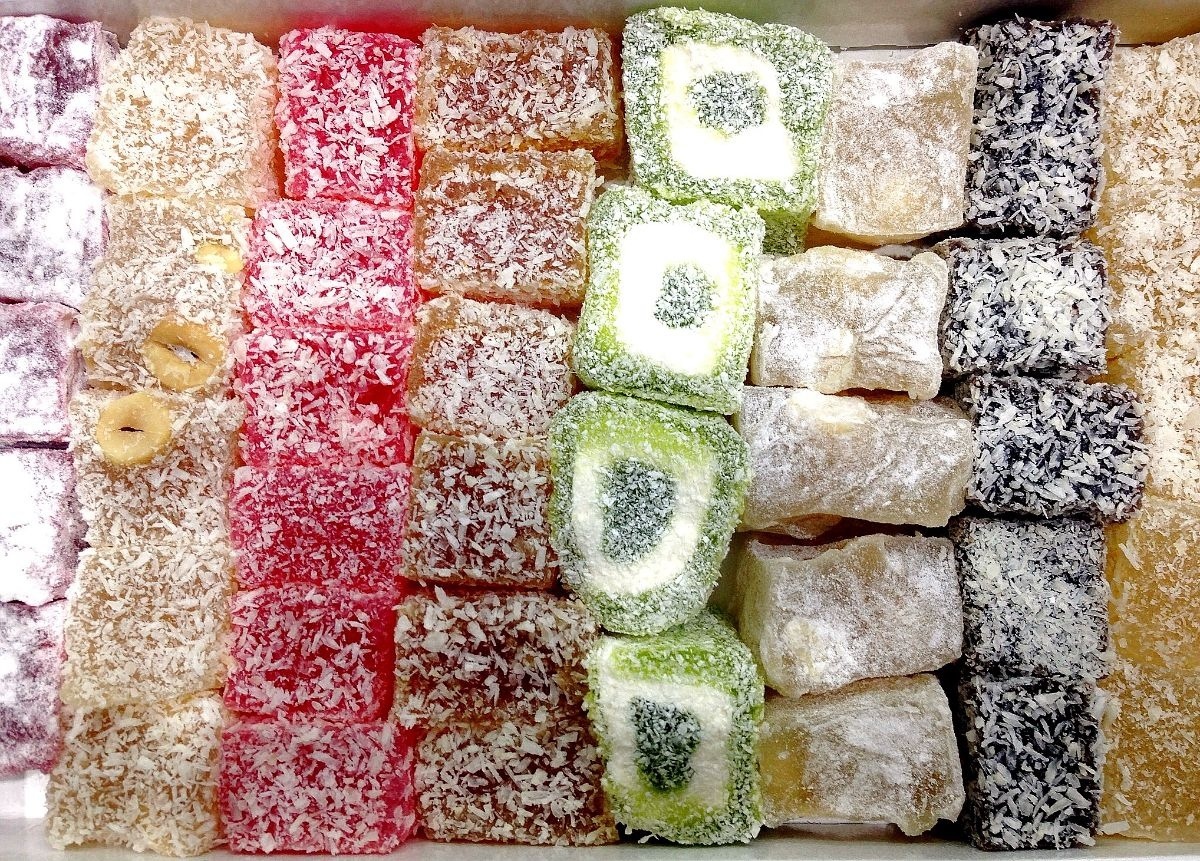 By now we all quite full and we welcomed the next stop which was for tea (and a bit of halva). Connie took us to a han (also called caravanserai). The caravanserai is a traveler’s inn, where traditionally camels and horses could be left in the courtyard and travelers could stay in tiny upstairs rooms. It was currently being used as an open air theatre (see the wooden steps in the photos below). We were served lovely Turkish tea (which I have fallen in love with) and nibbled on halva, hoping to digest all we had already eaten as we didn’t know what was in store next. 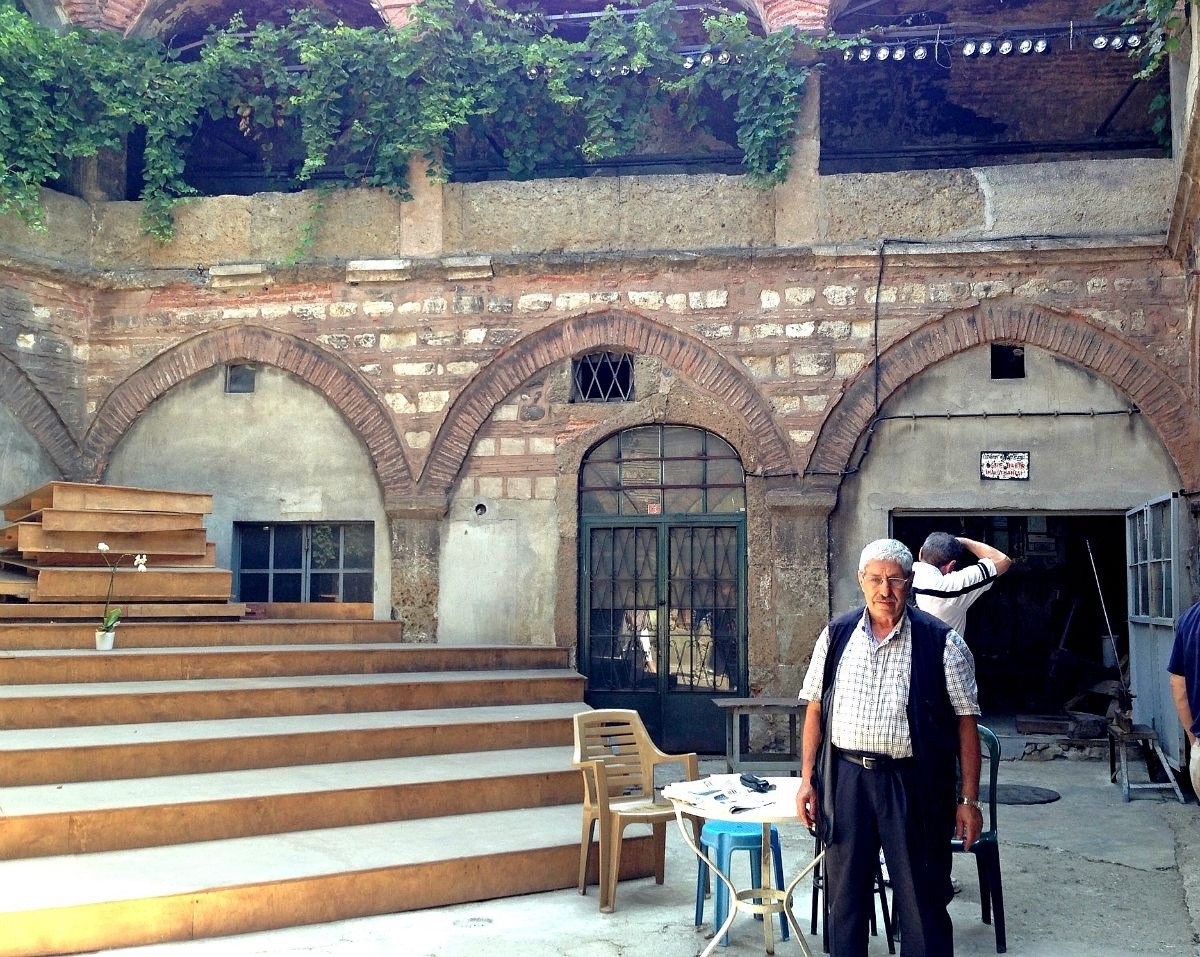 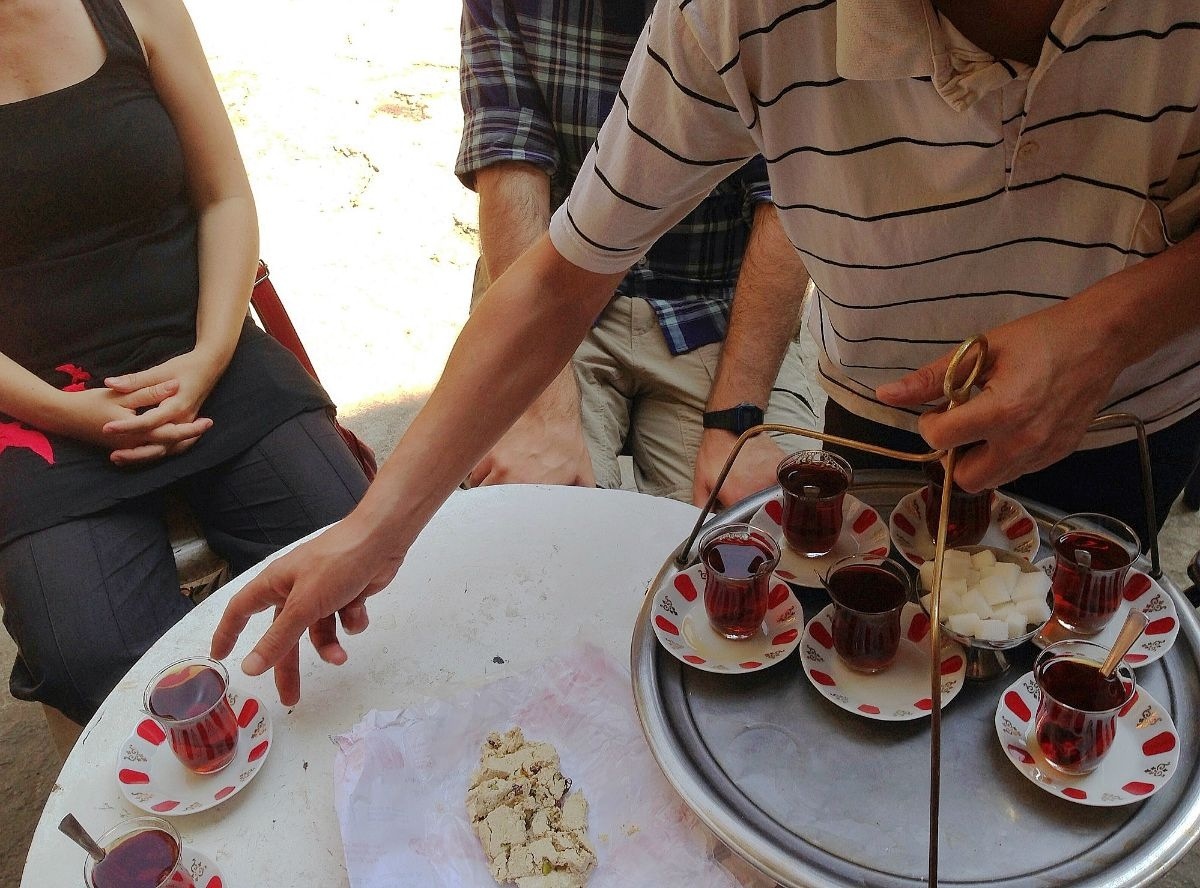 What was in store next was kebab, but not just any kebab. This one is made daily by the tiny kebab shop owner (it takes him one hour) and consists of layers of spicy lamb, tomato and peppers. It was easily the best kebab I have ever eaten. 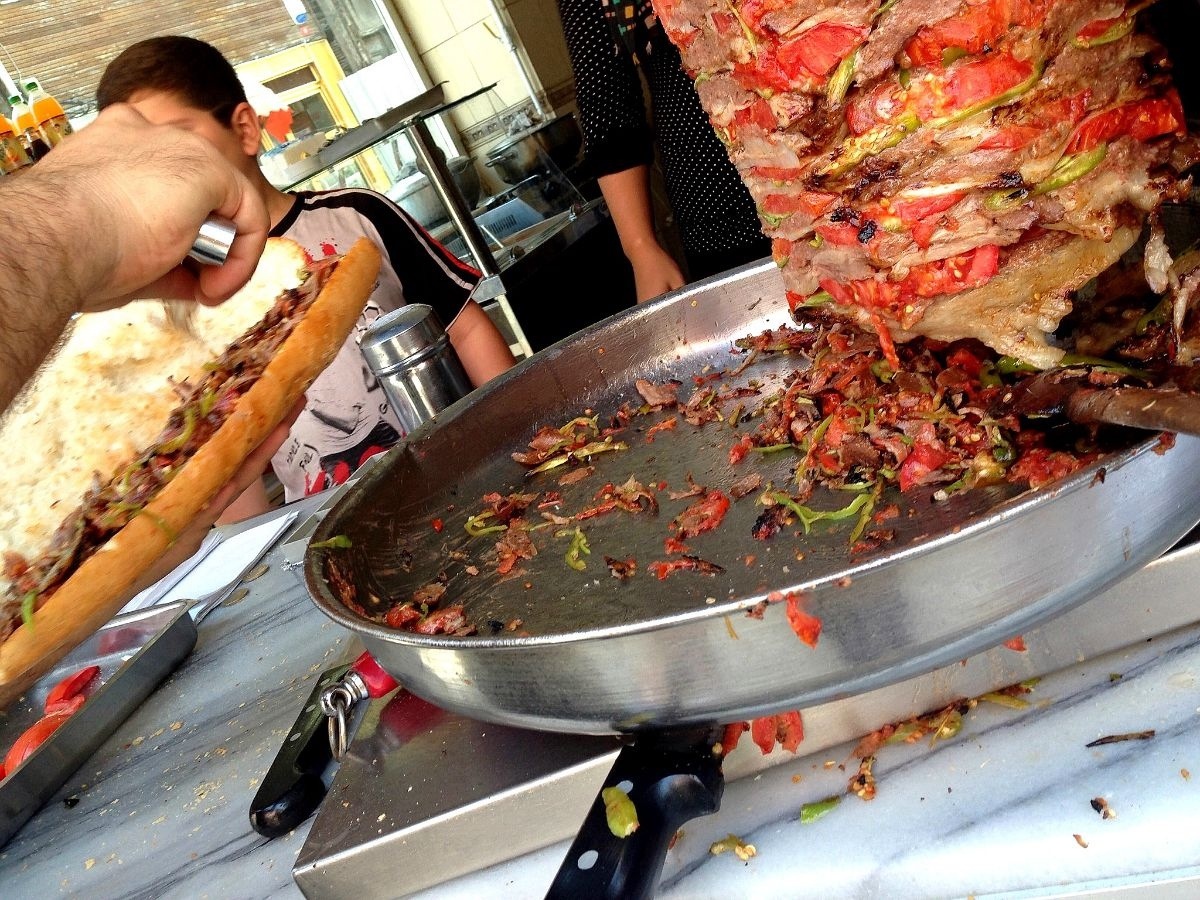 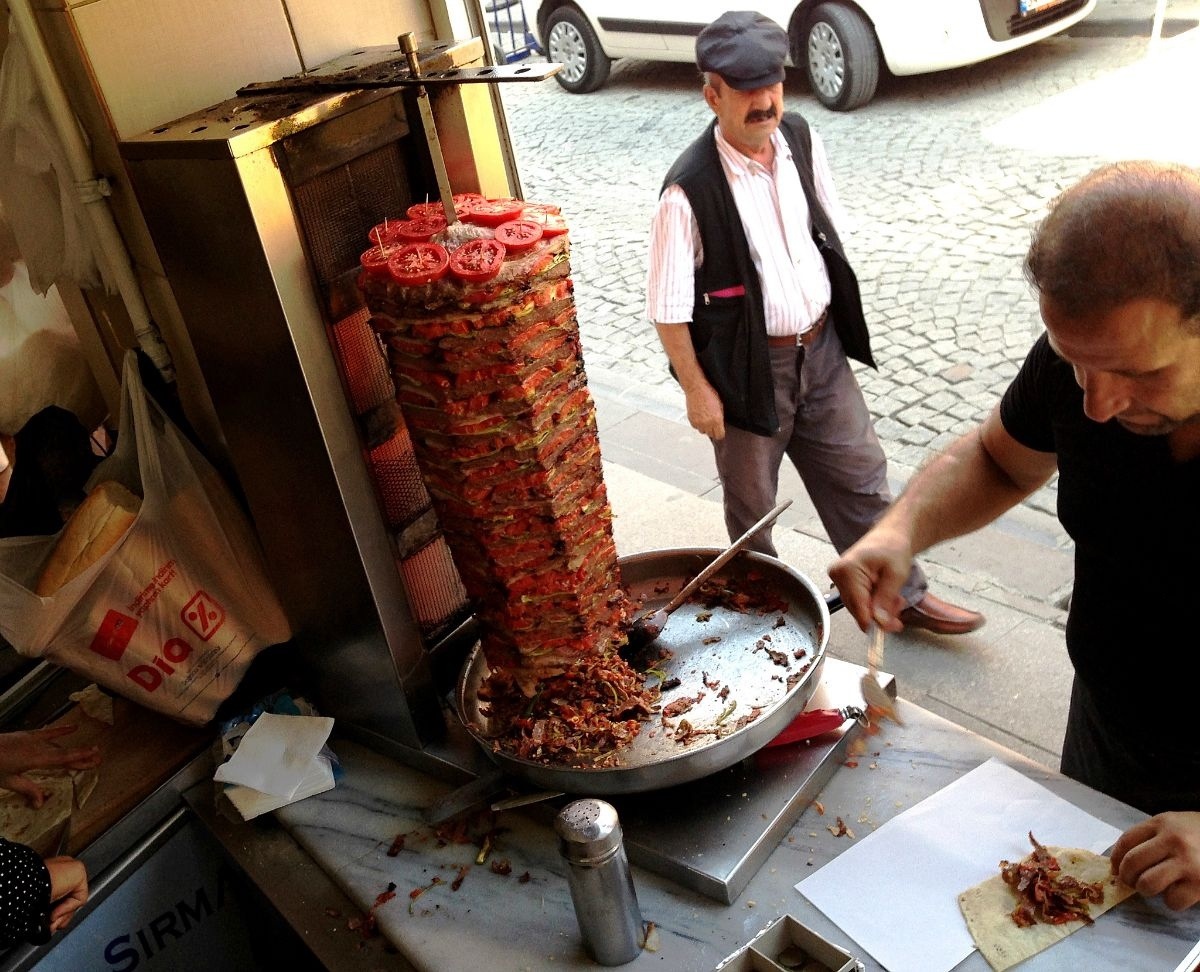 Walking towards the old Roman aqueduct, we stopped at a small store that sold cig koftem which is traditionally a raw lamb meze. The government has banned use of raw meat in prepared food so this was made with cracked wheat and was wrapped in a lettuce cup. It looked like the real thing and was very spicy. 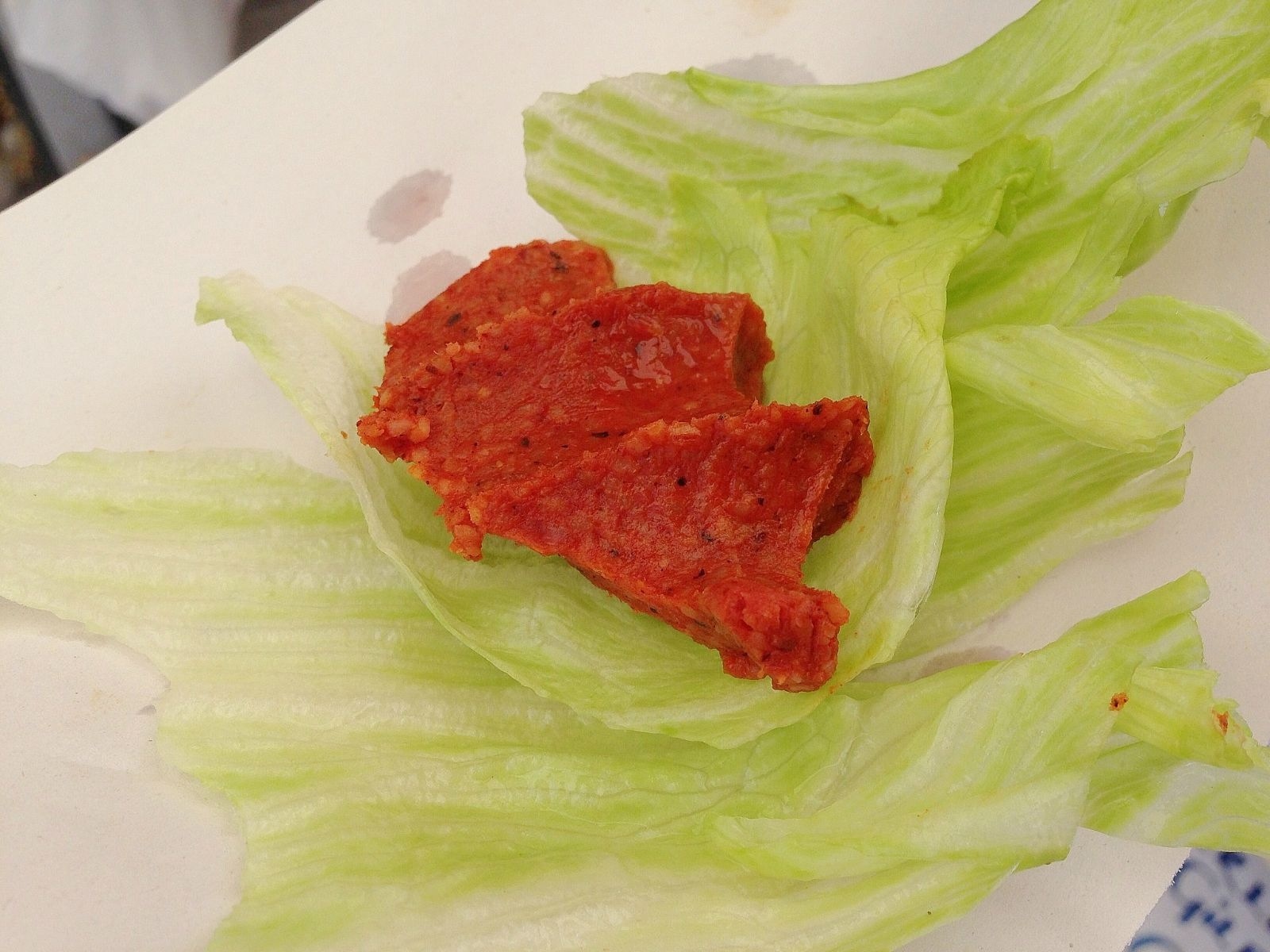 By this stage I had mistakenly (read – stupidly) thought that we had eaten lunch. But no, these were all appetizers before the main course! For lunch we went to a restaurant in Fatih in what seemed like a rather austere part of town. The restaurant specialized in roasted lamb and is apparently the Turkish President’s favorite restaurant. The lunch feast consisted of roasted lamb on bread, a delicious chicken rice pilaf covered with a hard egg shell (a traditional wedding dish – the bride and groom break the hard eggy covering together to allow the rice to spill out), a tomato and pomegranate molasses spicy sauce and salad, all accompanied by a delicious yoghurt drink. 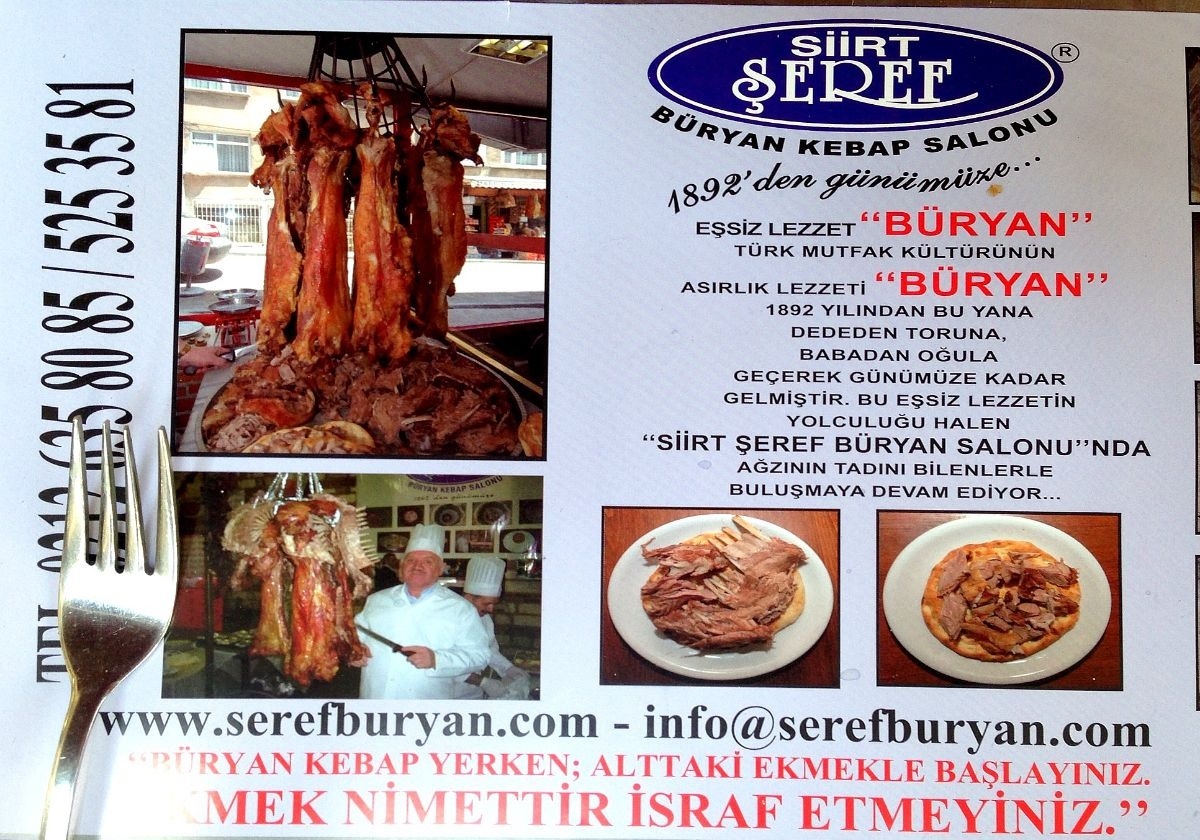 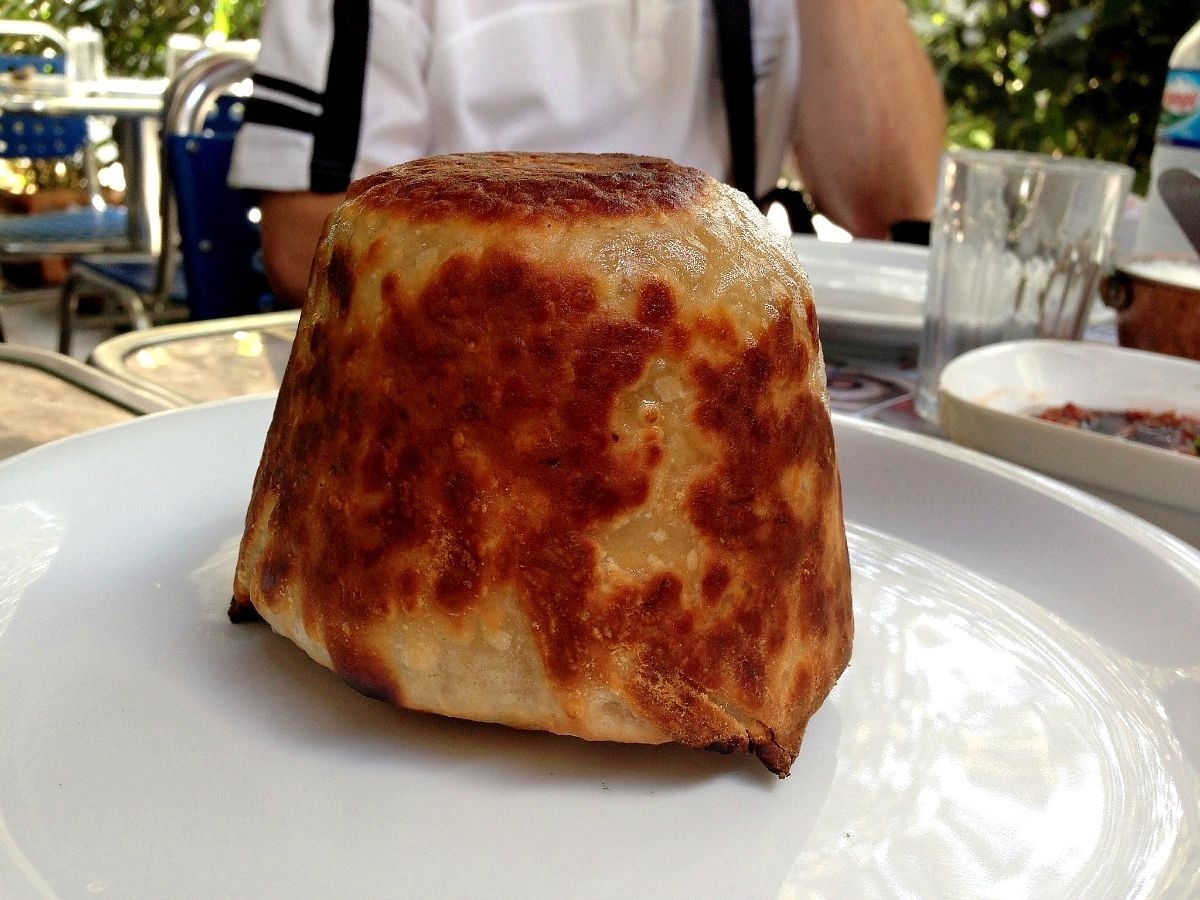 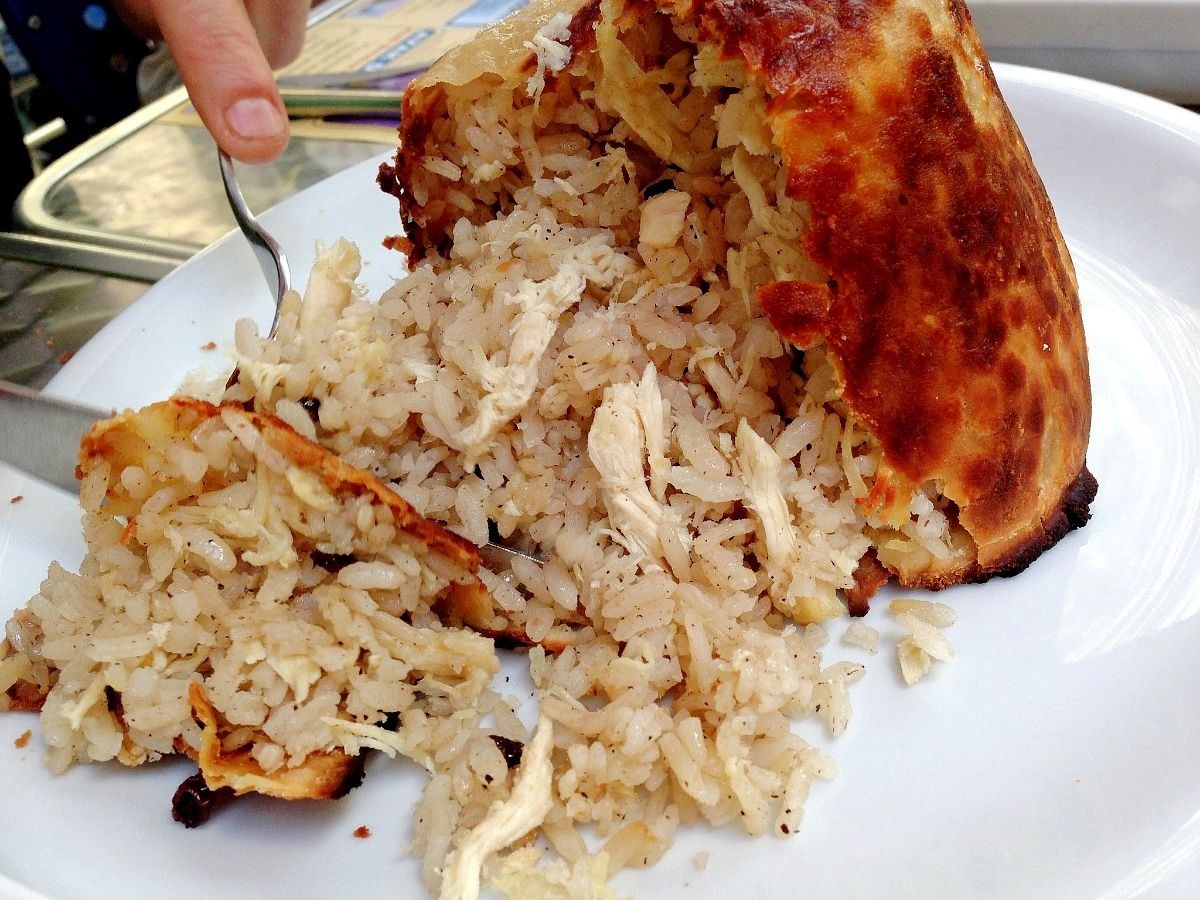 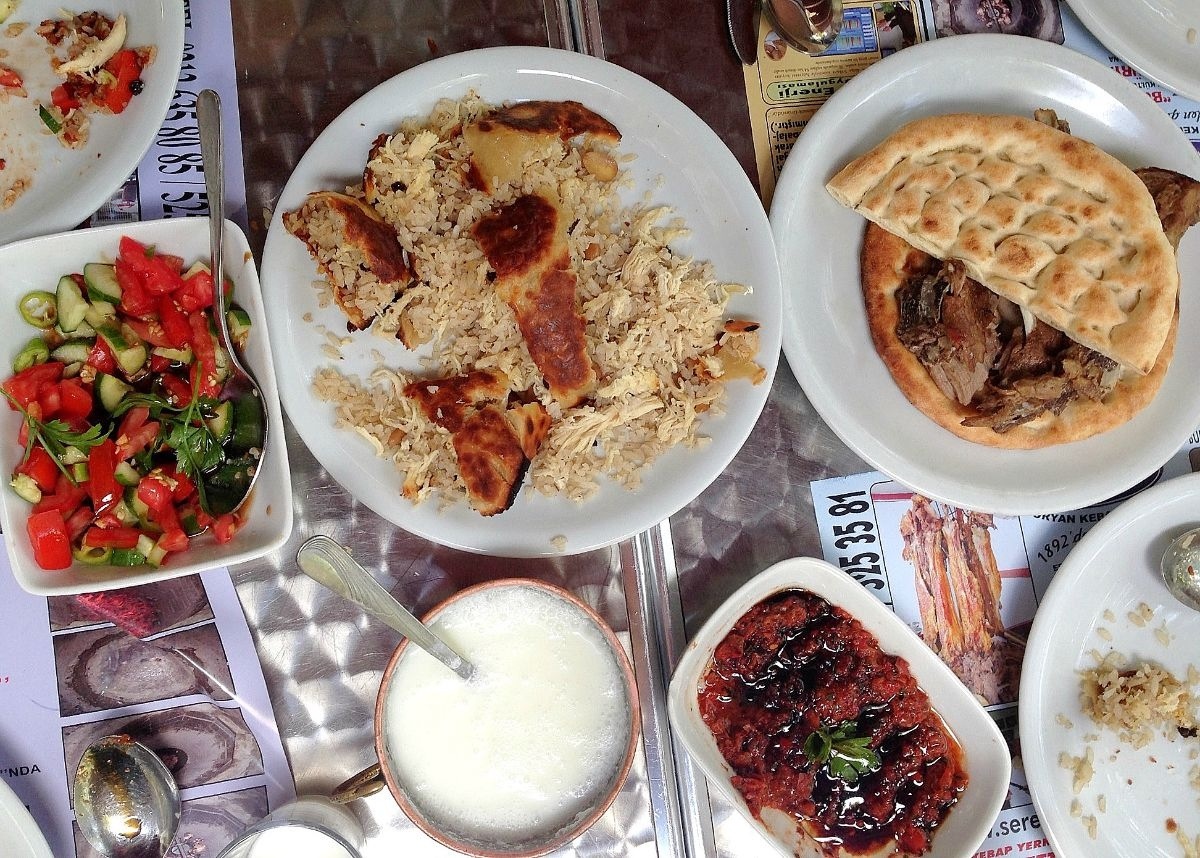 What an incredible experience this was. I understand that Culinary Secrets got a fantastic write up in the New York Times, and it is well deserved. You go to fantastic hidden places and get to see the “real Istanbul”. One recommendation if you want to go to one of these food tours – DO NOT eat dinner the night before!