In the hills of Abruzzo there are bears. And agriturismi. And when we visited, there was also a lot of snow. When I first planned my trip to Abruzzo I had not expected any of these things, except perhaps the agriturismi. My friend Giulia had made sure I knew about the accommodation and food as she runs what she calls a Country House (click here for more about Casale Centurione). But now more about the bears. And the snow. And the wonderful wonderful Abruzzese food. 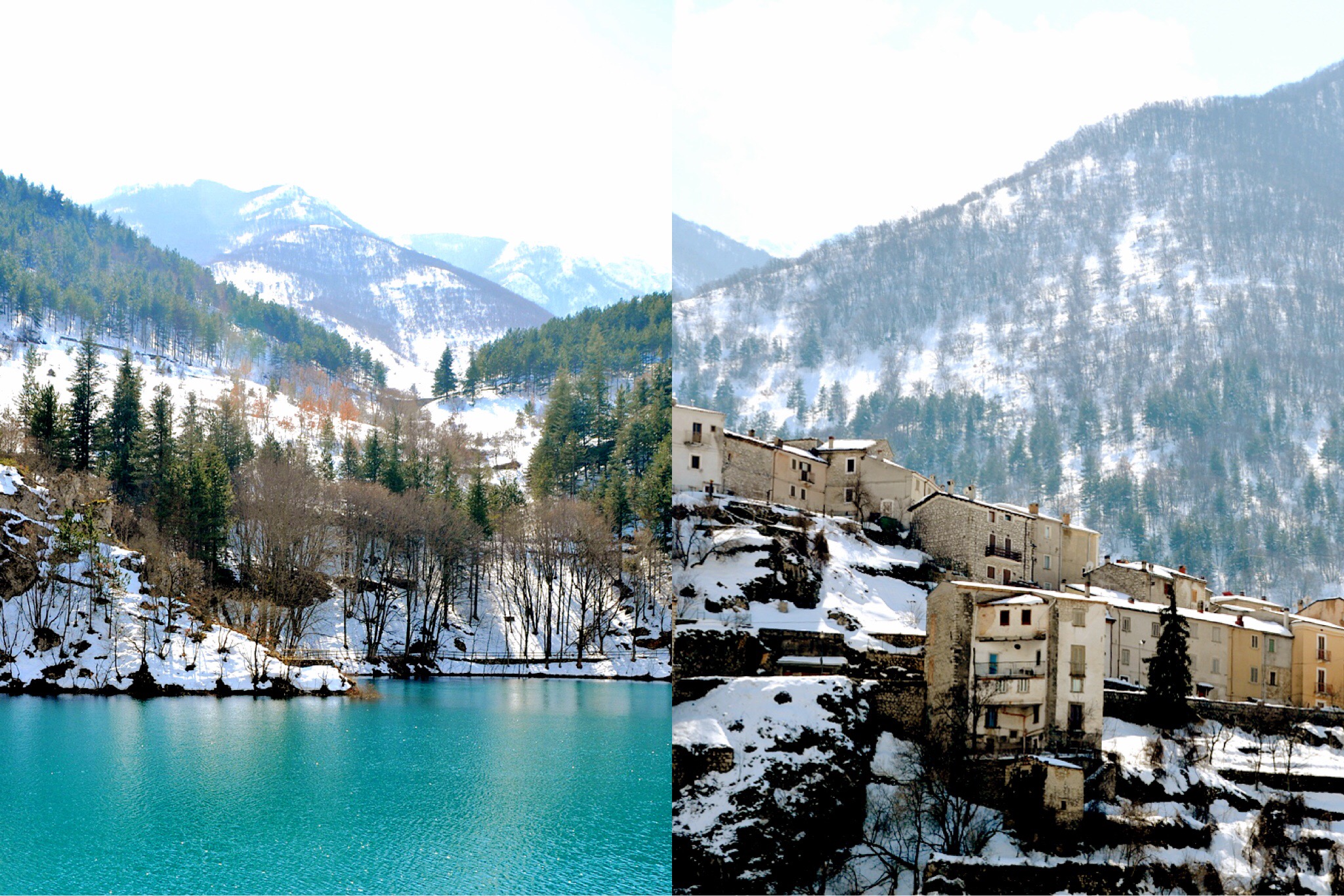 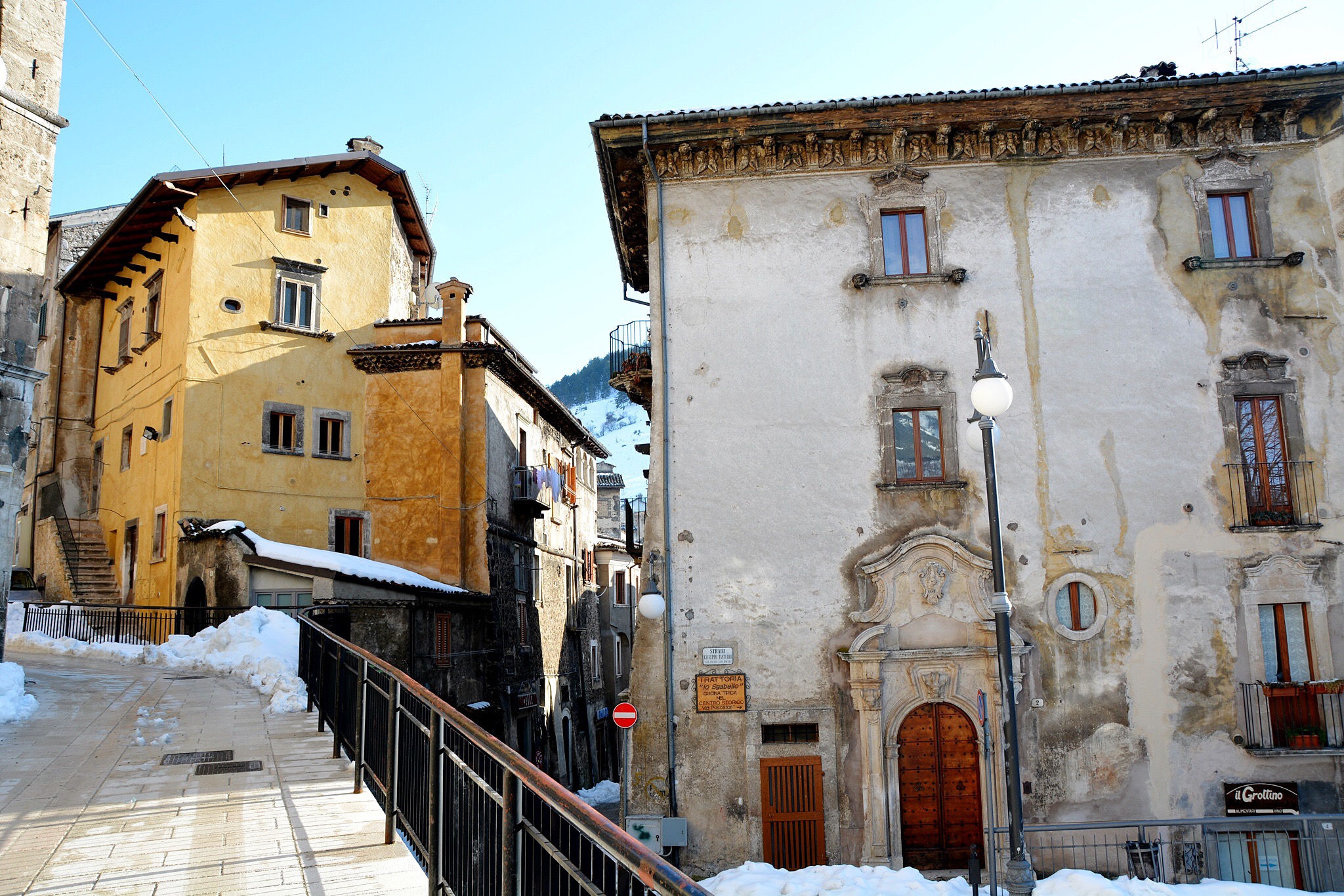 The snow was a complete surprise when we visited. It was mid March (technically spring) and Abruzzo is towards the south of Italy so I assumed it would be if not warm, well then mild. So we were not dressed for snow or mentally prepared for it. And there were no snow chains in our rental car. But it was exquisite. The roads had been cleared, the sun was shining and the air was crisp. Plus everywhere we went was heated so we were warm (as long as we were either in the car or inside). 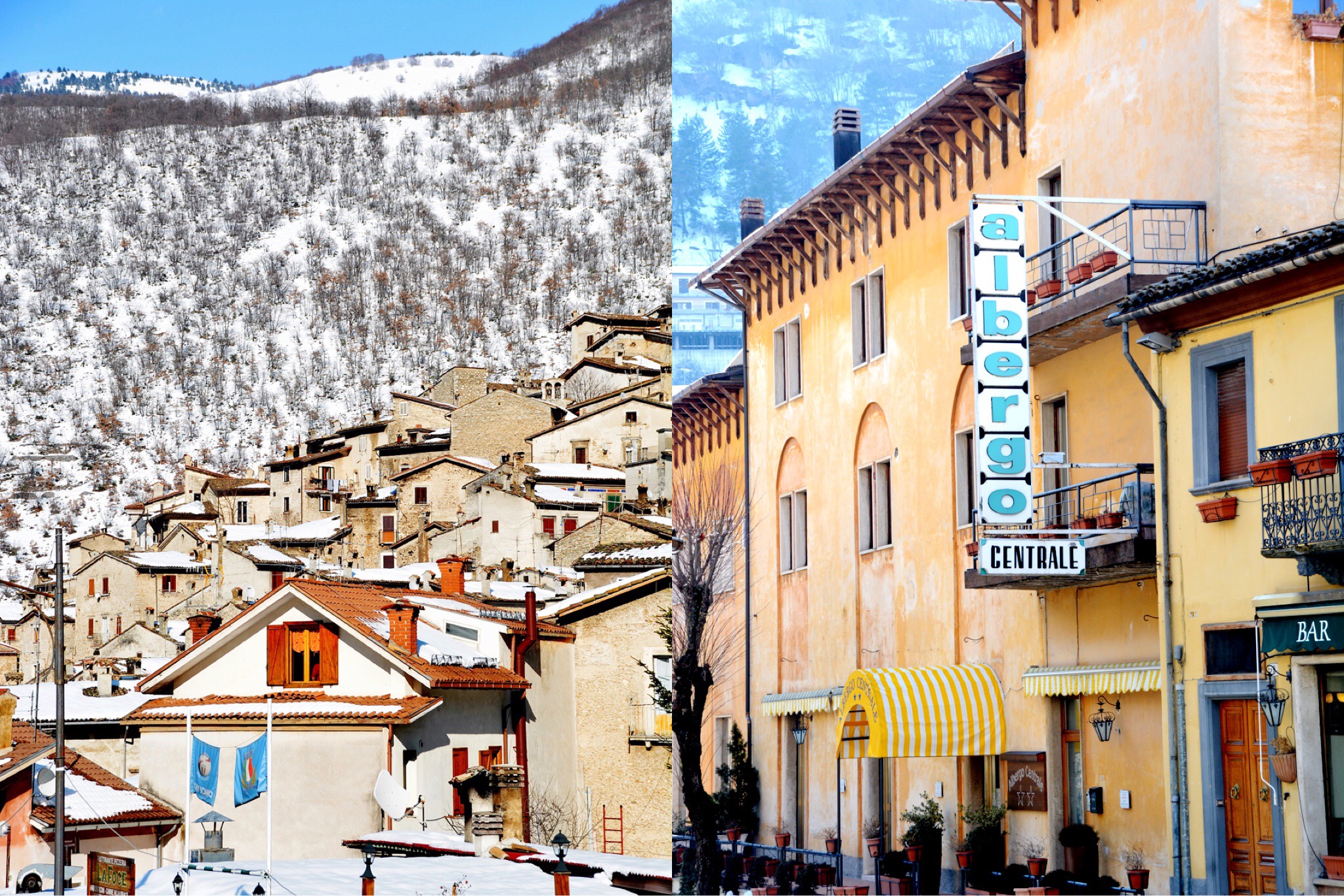 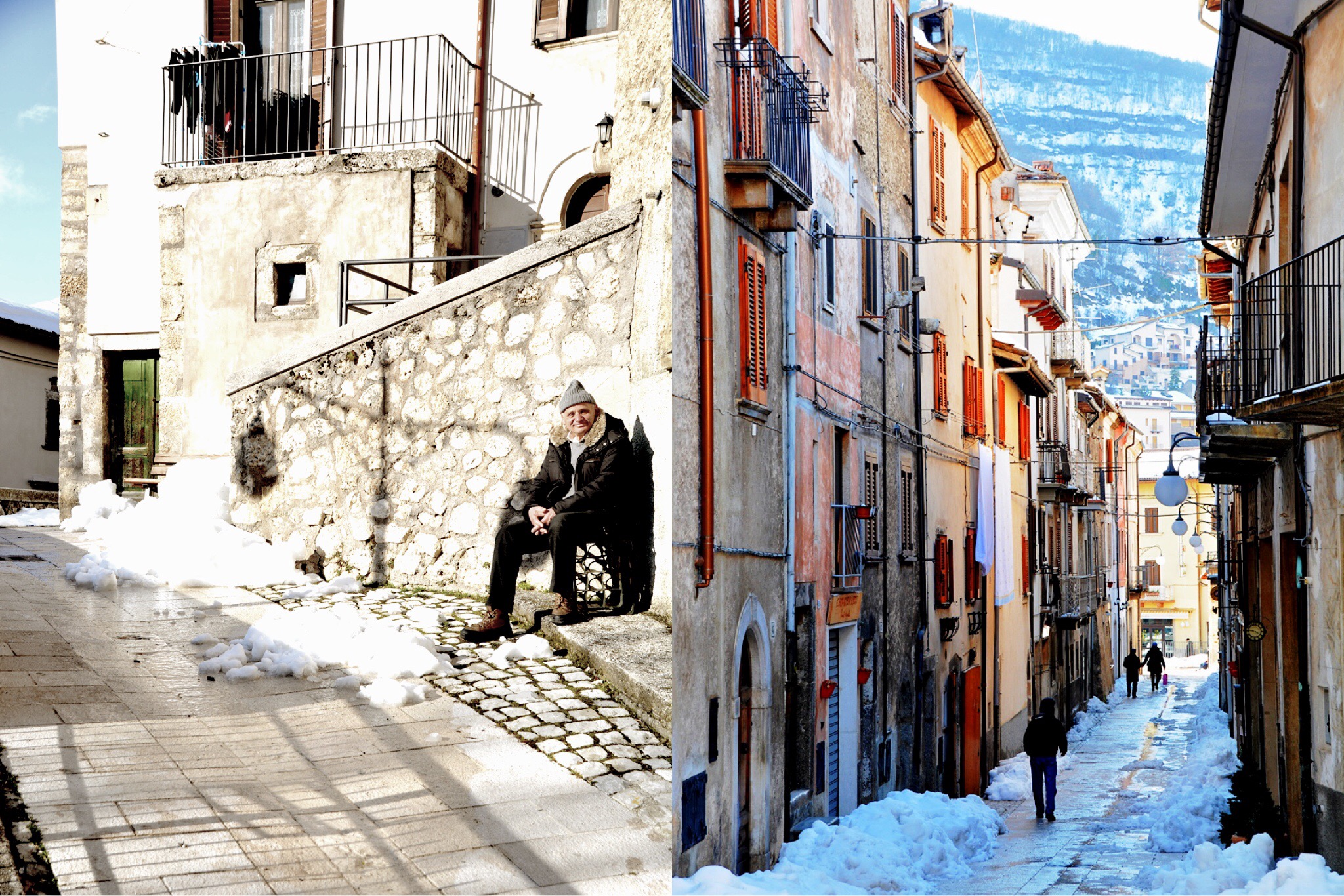 Giulia took us on a long drive on one of the days from Mannoppello to Sulmona, where we met her English-speaking friends Katy and Susanna. After a couple of hours in picturesque Sulmona, we all drove on to the very pretty and snow-covered town of Scanno. On the drive up we had been talking about the Marsican bear, native to the Abruzzo National Park. This was a huge surprise to me – there were bears, in southern Italy? There aren’t many of them left (only about 200 of them) and they grow up to 2 metres (well over 6 feet) in height.

Although we did not spot any bears we did visit the family-run Di Masso bakery in Scanno, that makes the delicious Pan dell’orso (bread of the bear), a soft cake with a base of almonds and honey, covered in a thin layer of chocolate. Pastry-chef and bakery owner Angelo di Masso took us on a tour of the bakery kitchen and told us the story behind Pan dell’orso. The dome shaped cake is a similar shape to the bread that shepherds in Abruzzo would take with them in spring as sustenance whilst they were moving herds of animals. The story is that if they came across a bear, they would emerge unharmed as the bear would take the pan dell’orso instead. Clever bears. 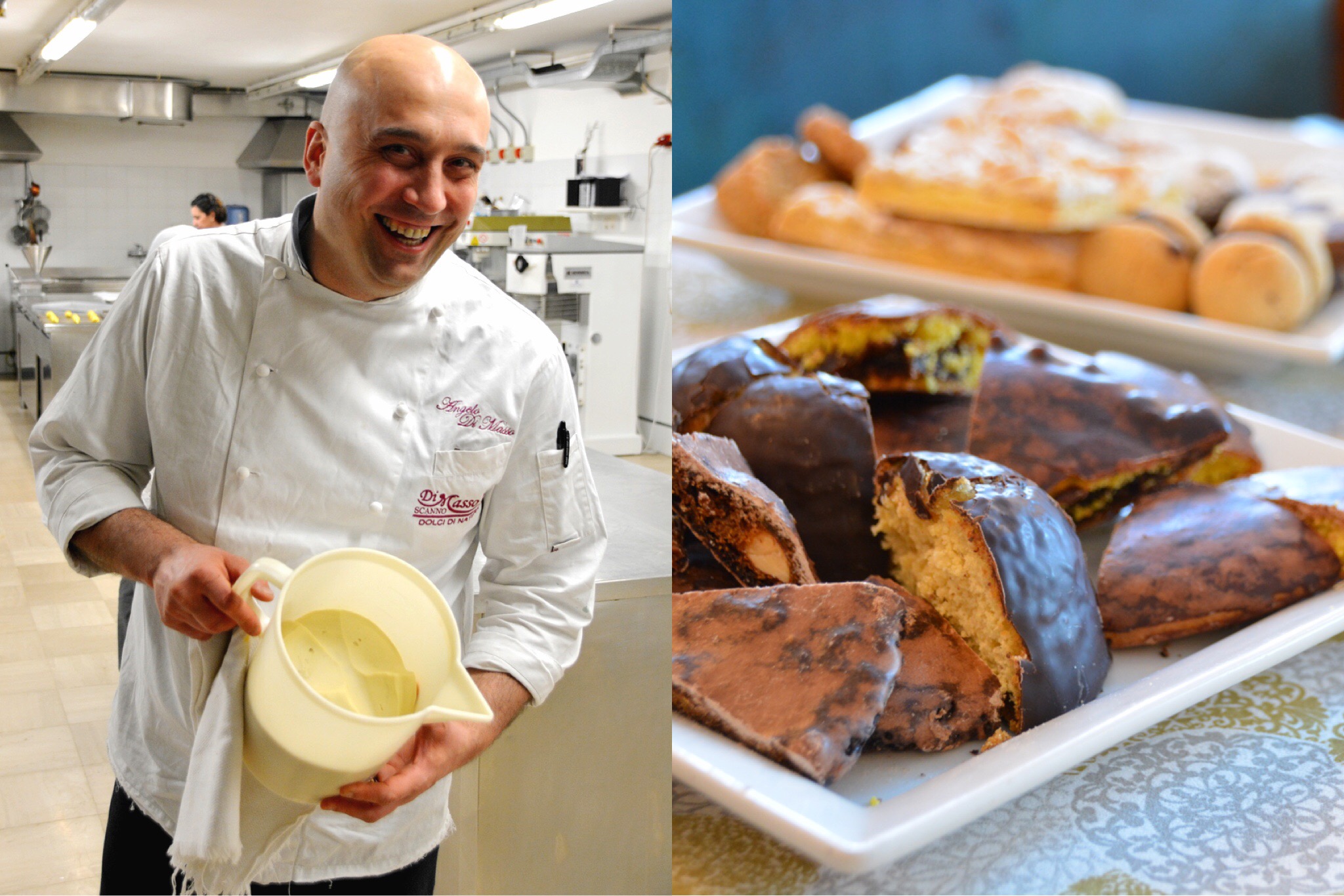 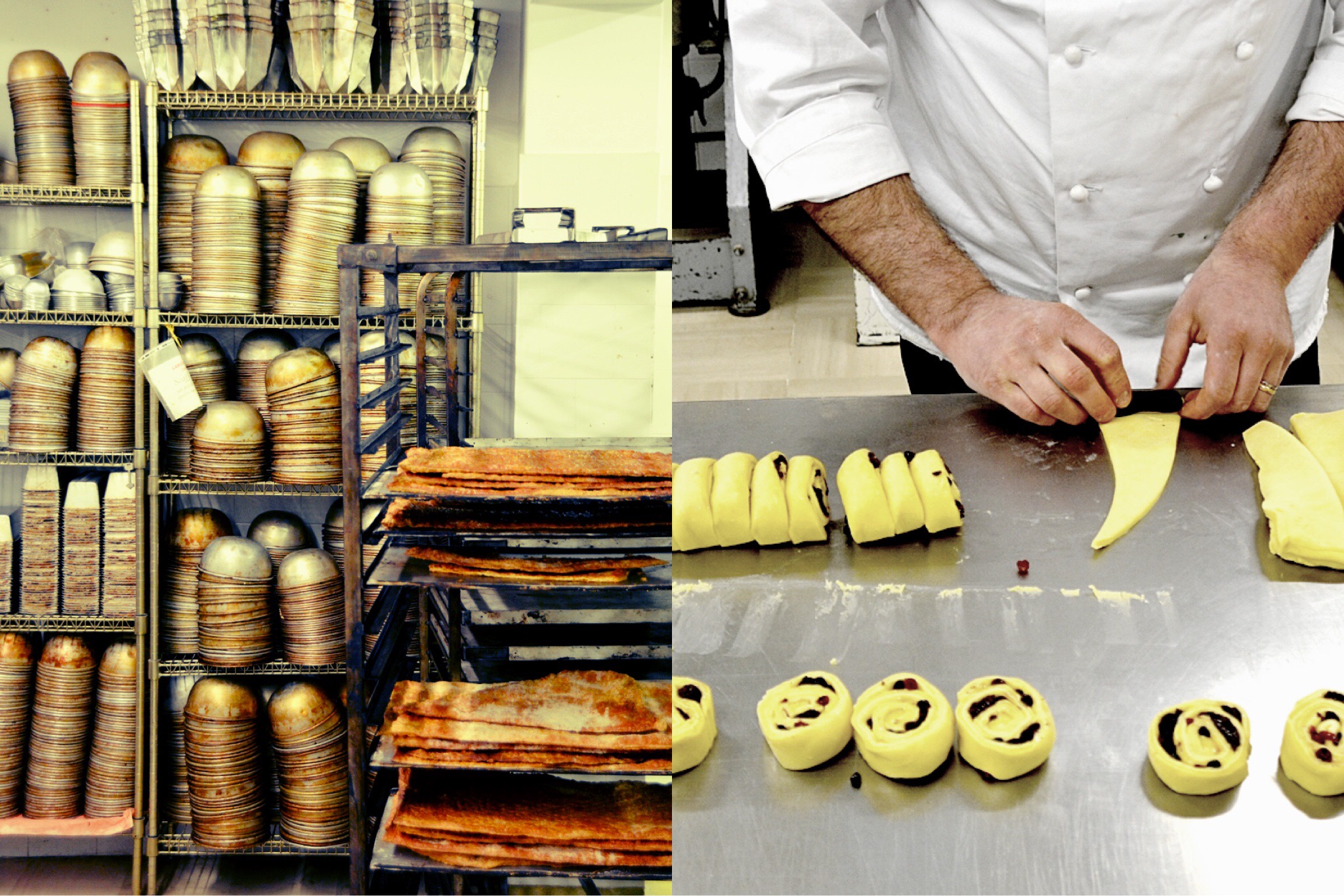 After Scanno we drove further into the valley up to a point where the road seemed to end in a wall of snow. I was thinking about the 2 meter bears (and glad that Angelo had given us a couple of pan dell’orso) when we came upon the Bio-agriturismo Valle Scannese. We were hoping to have lunch in their renowned restaurant called Da Gregorio, where all the food is made from products grown on the property. The bio-agriturismo (called “bio” as it is all organic) is run by Gregorio Rotolo (a gentle giant of a man who we were introduced to in the restaurant). We had a DIVINE tasting platter of cheese and salumi (not only made on the property but from animals grown on the property using traditional farming methods) washed down with jugs of their own red wine. My favourite cheese was a soft rather sharp one that looked a bit like pale yellow scrambled eggs (see photo below of the tasting plate on the left). I later found out that worms have got something to do with its production. Glad I didn’t know that before I ate it! It was the kind of meal that I am sure the bears would also have enjoyed if they didn’t have a sweet tooth. 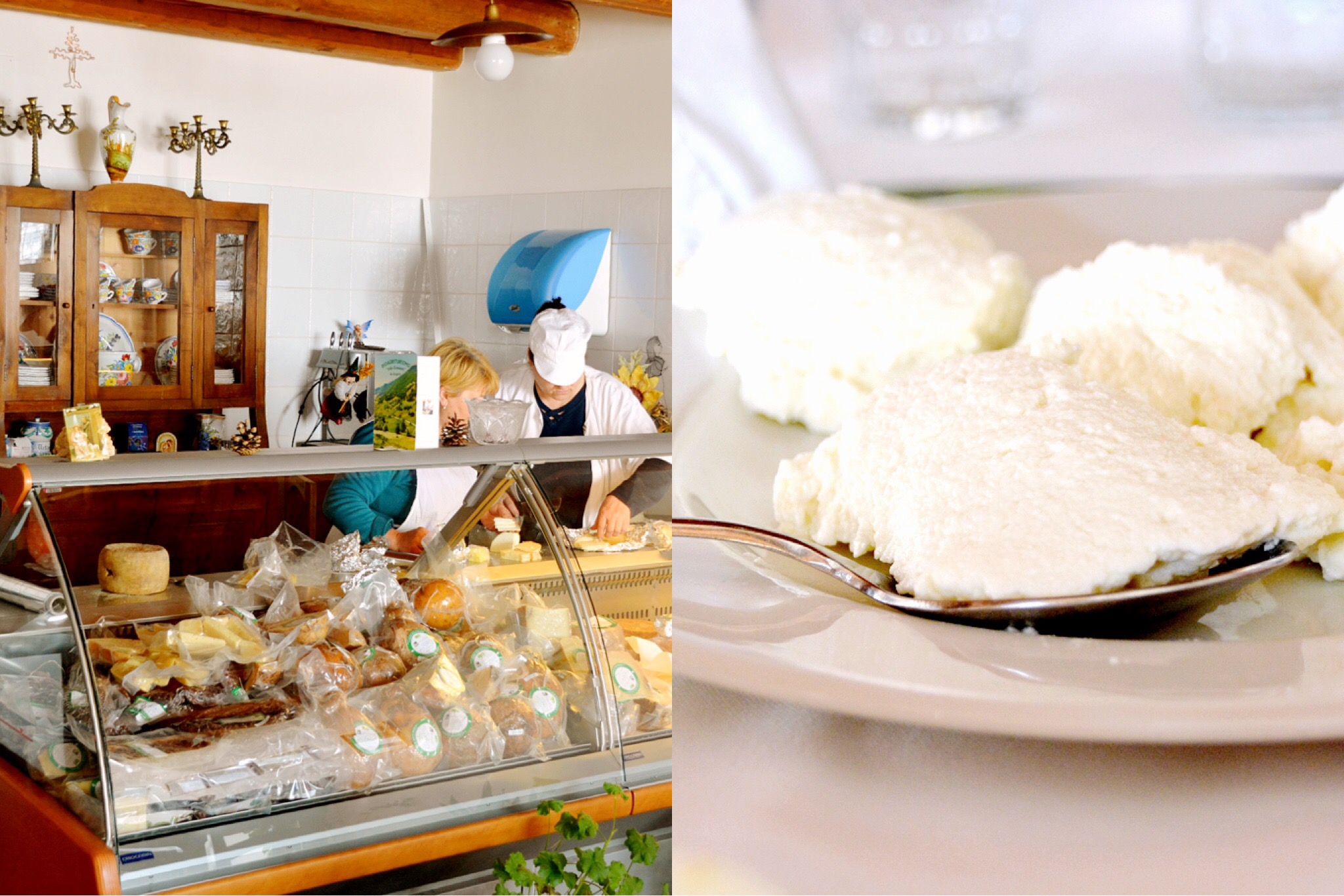 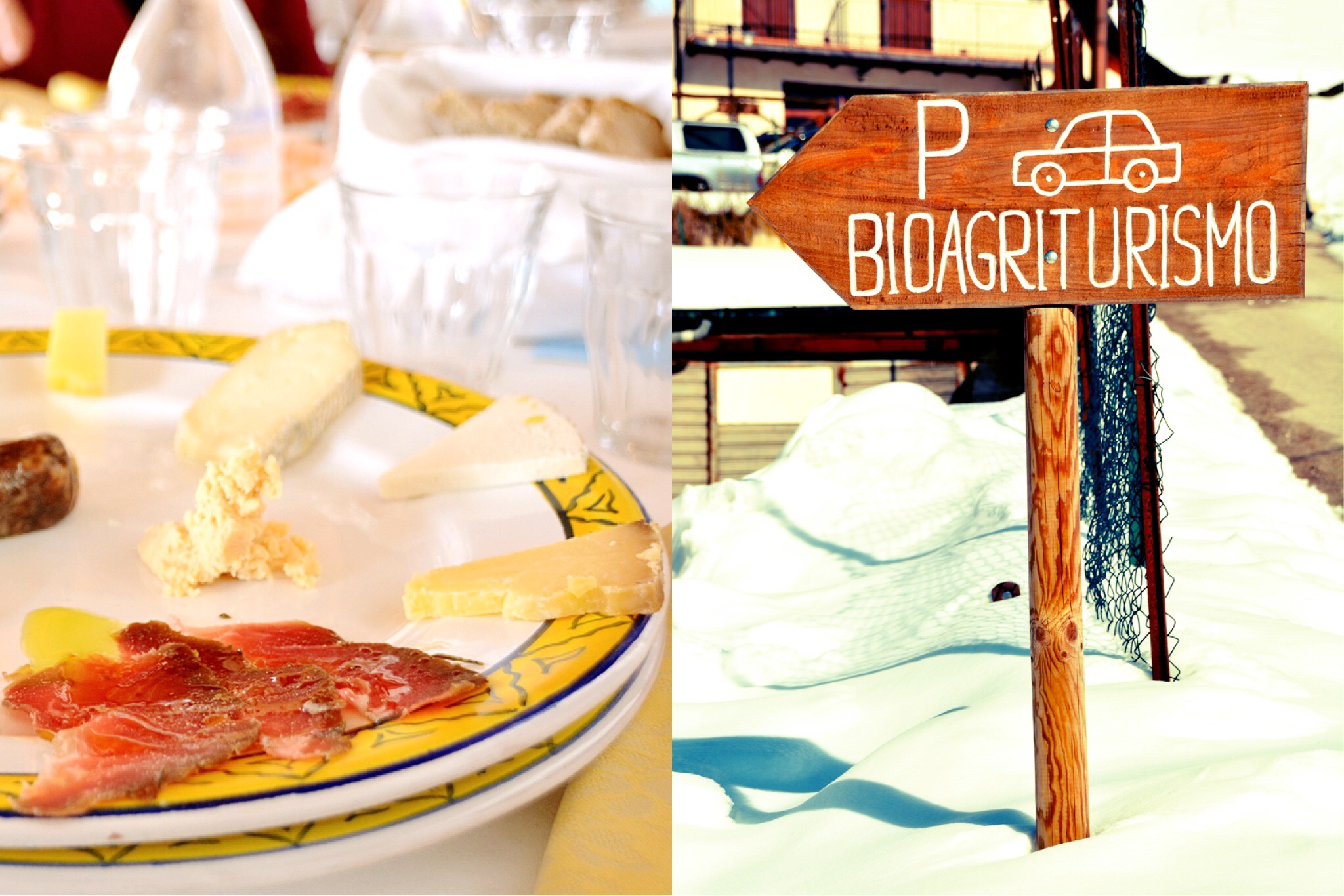 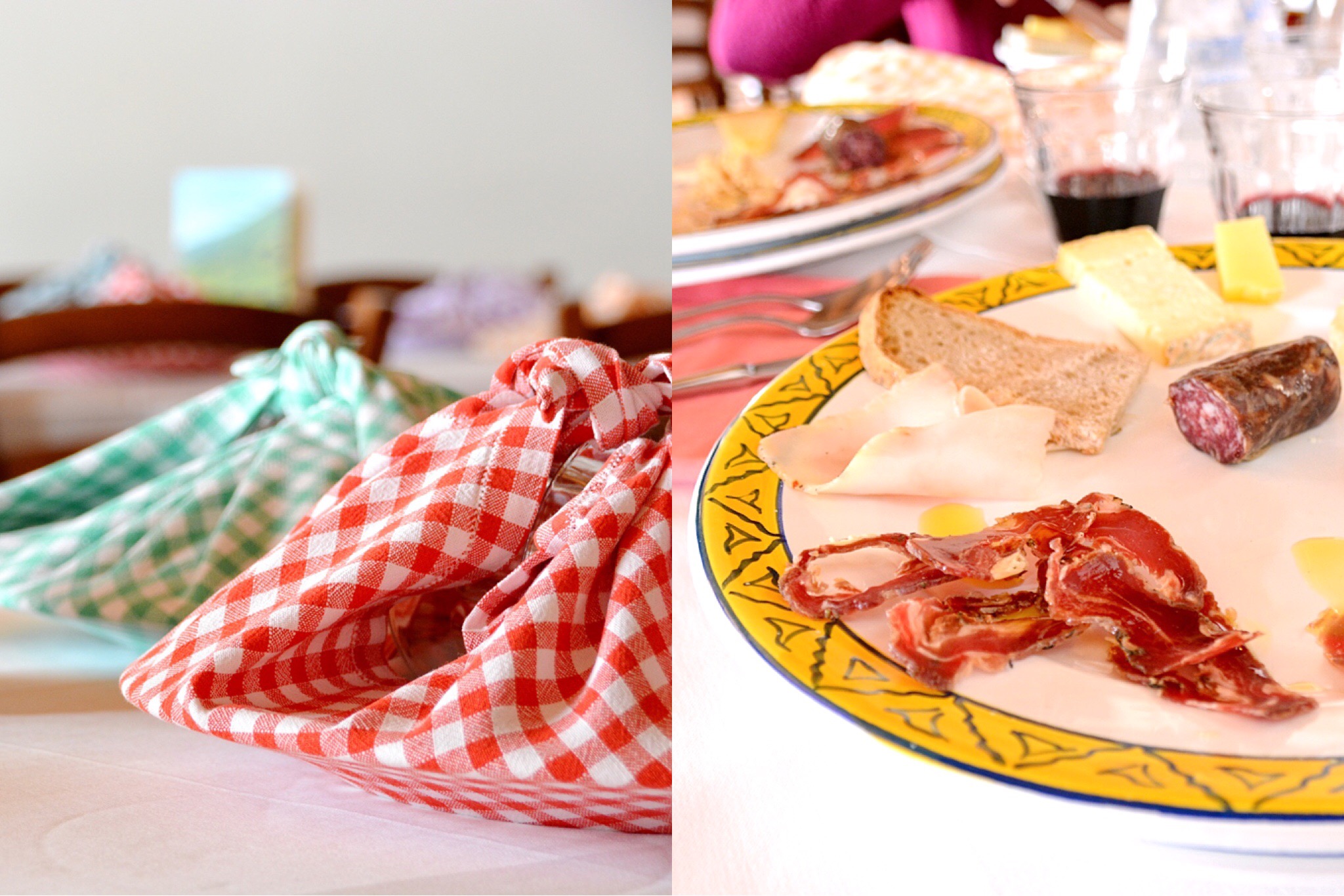 On the way out of the agriturismo I spotted a family of super-friendly dogs enjoying the sun. They were white, friendly and almost (but not quite) as big as bears. I love love love Abruzzo and can’t wait to visit again. 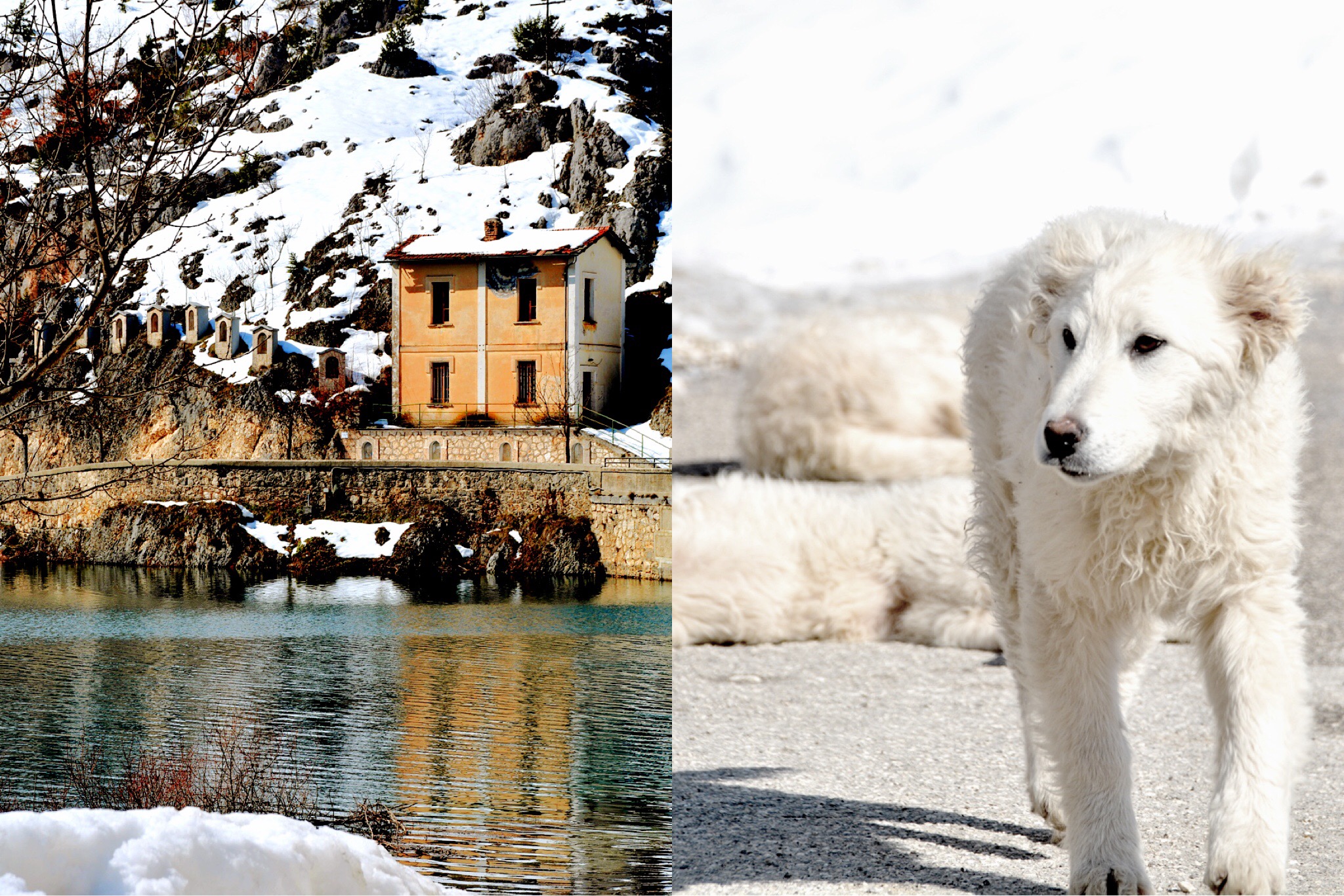