A few weeks ago I took my mother to visit my godmother Gemma. They both arrived in Australia in 1950 through the sponsored migration program, although santola Gemma (as I call her) arrived a couple of months earlier. Her husband had been friends with my father back in Pola (Istria) as well as working with my grandfather Matteo in the Pola post office. Mamma and santola have a strong connection: both had experienced 1950s Australia as Northern Italian women, are now both widows, have lots of stories to tell and love chatting. They speak on the phone regularly, comparing stories about their grandchildren or tales of those first years in Australia, but as they live on opposite sides of town, rarely get to see one other. 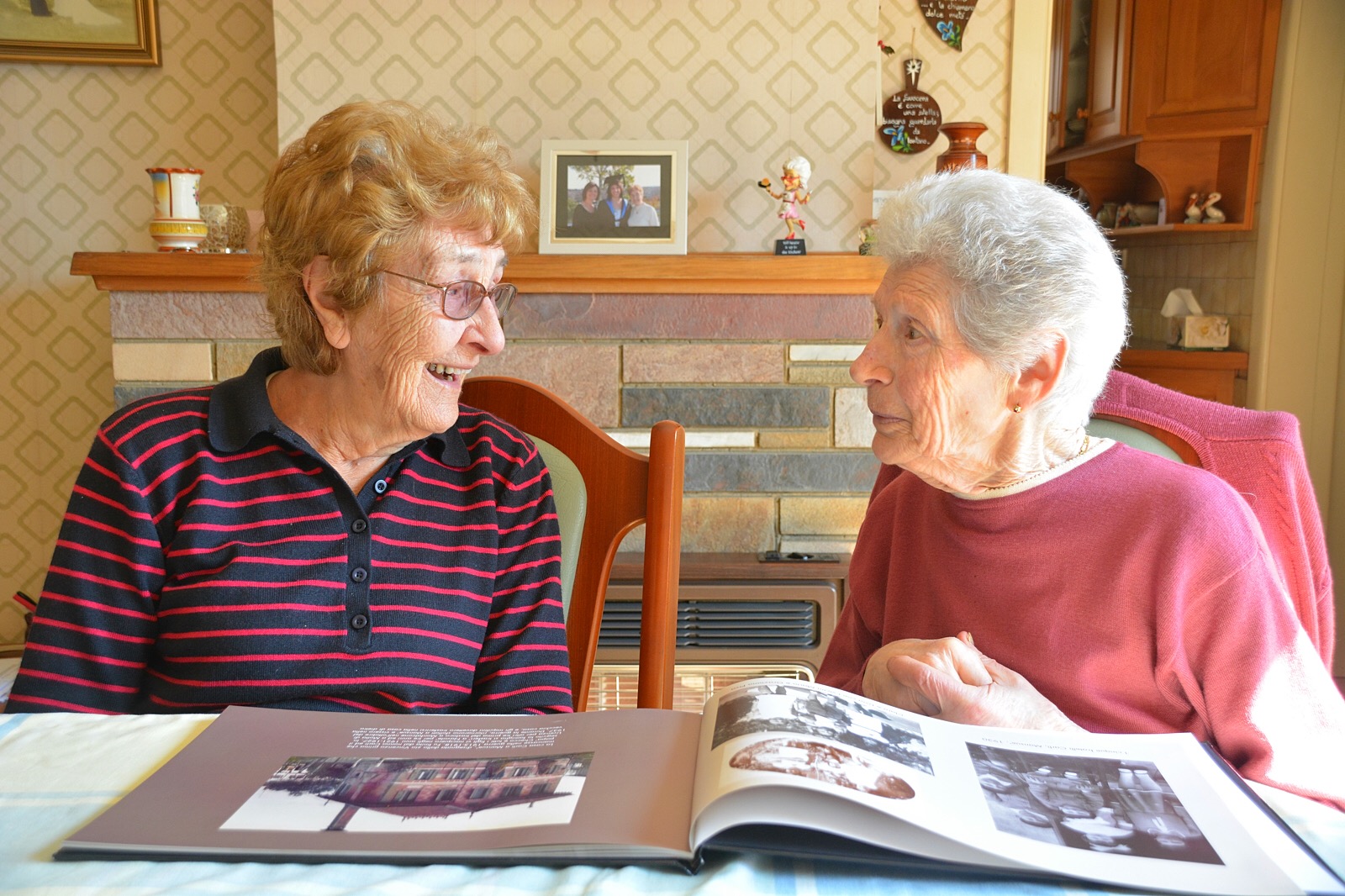 It was a lovely spring day when mamma and I headed over the West Gate Bridge – our first stop was Cavallaro and Sons in Footscary to pick up some cannoli to take morning tea to santola Gemma. Mamma met the charming Tony Cavallaro, we had a coffee and then collected six cannoli – three ricotta and three filled with custard (vanilla one end and chocolate the other). I imagined we would have two each and that would make a very satisfying morning tea. Mamma had told santola that we would bring something to eat and she should not go to any trouble. We got back into the car and headed towards the beach. I didn’t remember the number of the house, but we both knew exactly what it looked like – it hasn’t changed much since it was built in the late 1940s, when it was one of the few houses in the area, close to the foreshore. The black and white photos below were taken at a New Year’s Eve celebration in 1954 at Gemma’s house by the beach – my parents, Gemma and Mario as well as other polesani are in both photos. 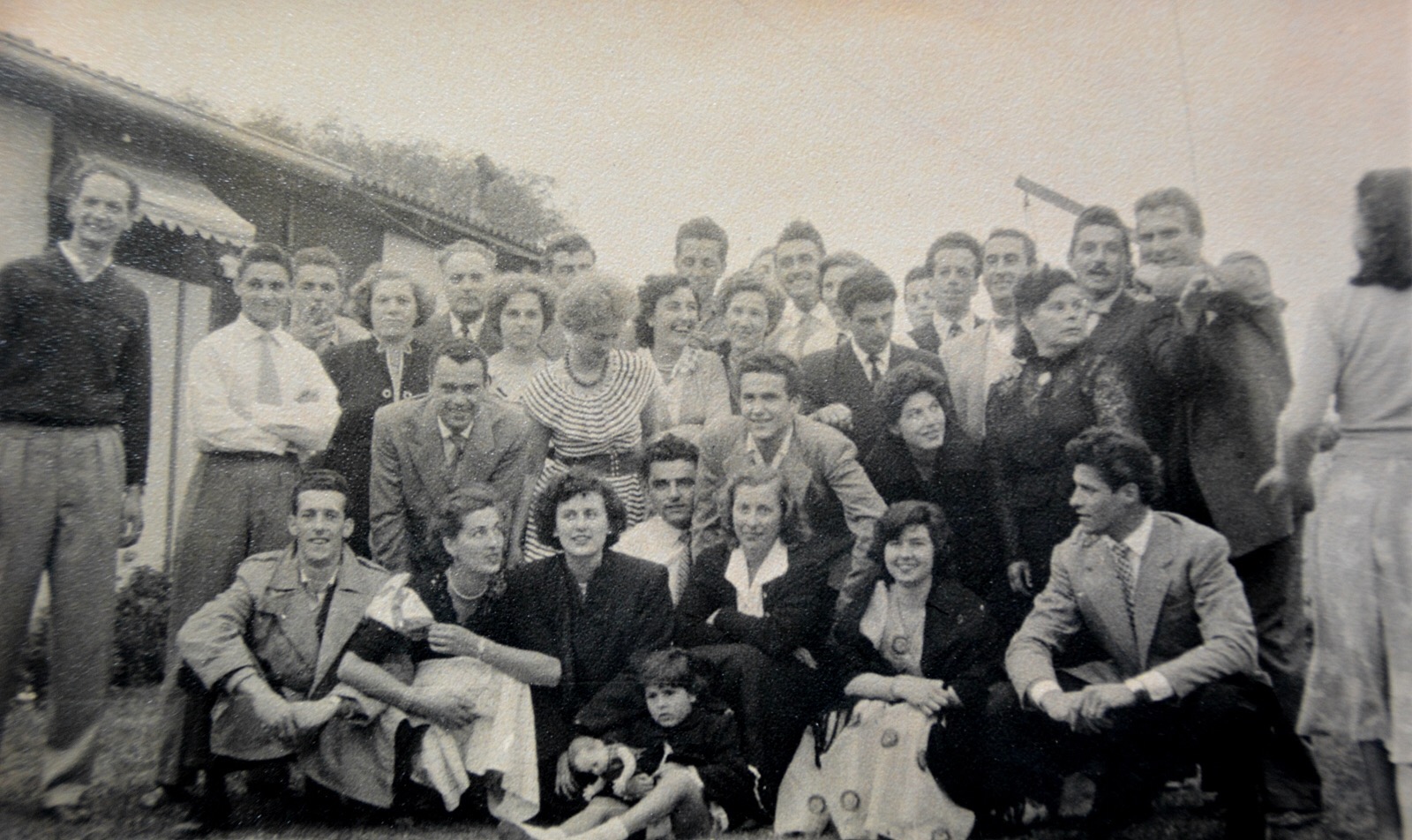 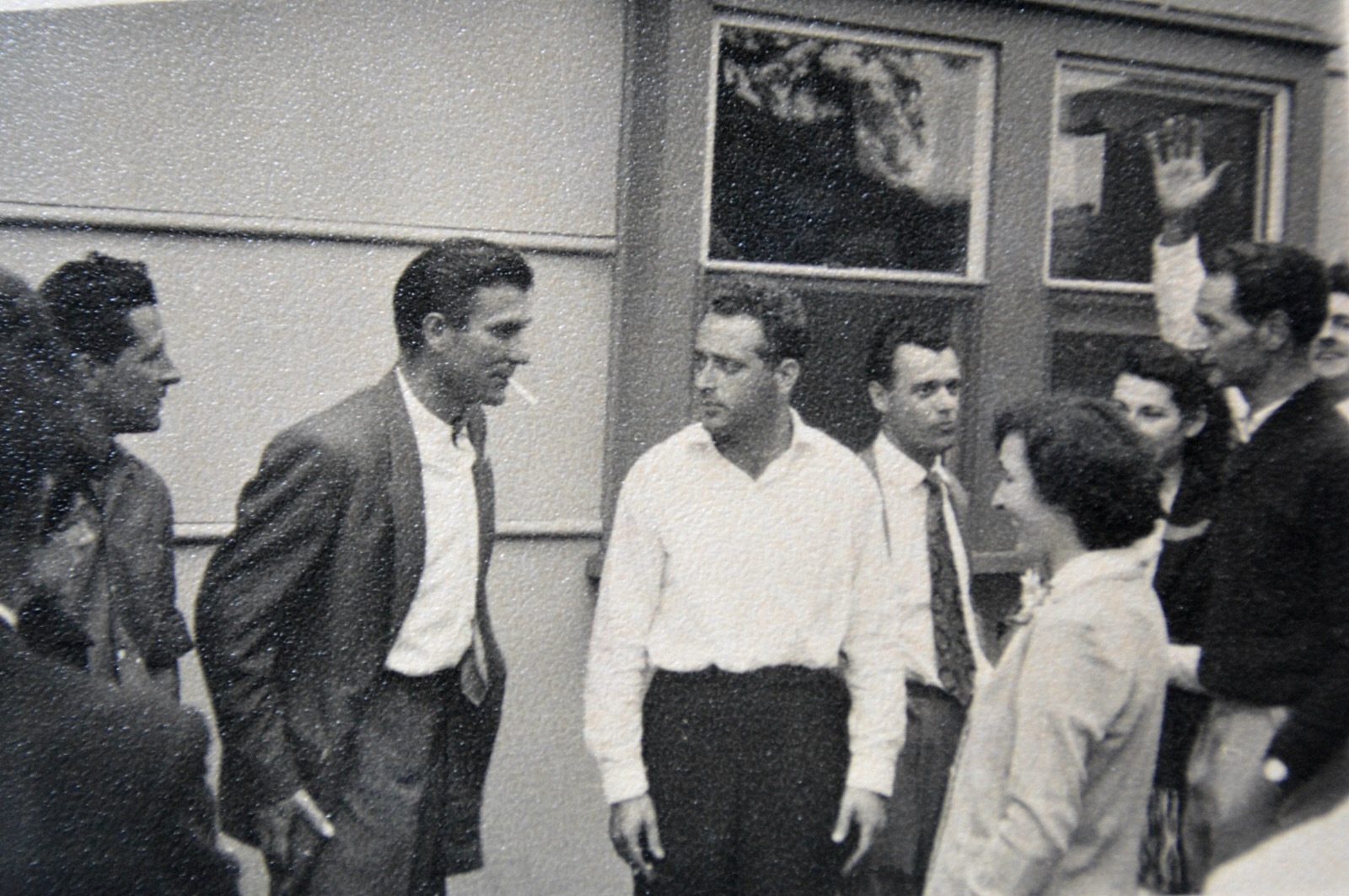 Santola Gemma greeted us with open arms, she looked sprightly and moved quickly considering the fact that she is not far off 90. It was so lovely to see her again! I have many fond memories of visiting the house with my parents as a child, when her husband, santolo Mario was still alive. She ushered us to the familiar dining table, and I gave her the box of cannoli. She thanked me, smiled and told me that she had also prepared a little something – she went into the kitchen and emerged holding a tiramisù that she had made. Well! Clearly no-one would be counting calories today. We got some plates and serviettes, then she started dividing the tiramisù into massive quarters…. “Ma no, basta metà” mamma and I exclaimed at the same time (half of that slice will do). Her tiramisù was delicious – sweet and creamy, with a good espresso hit. We then went on to have a cannolo each (mamma exclaiming that they were just as good as the ones she had eaten in Taormina, Sicily) and a long leisurely catch-up over old photos. 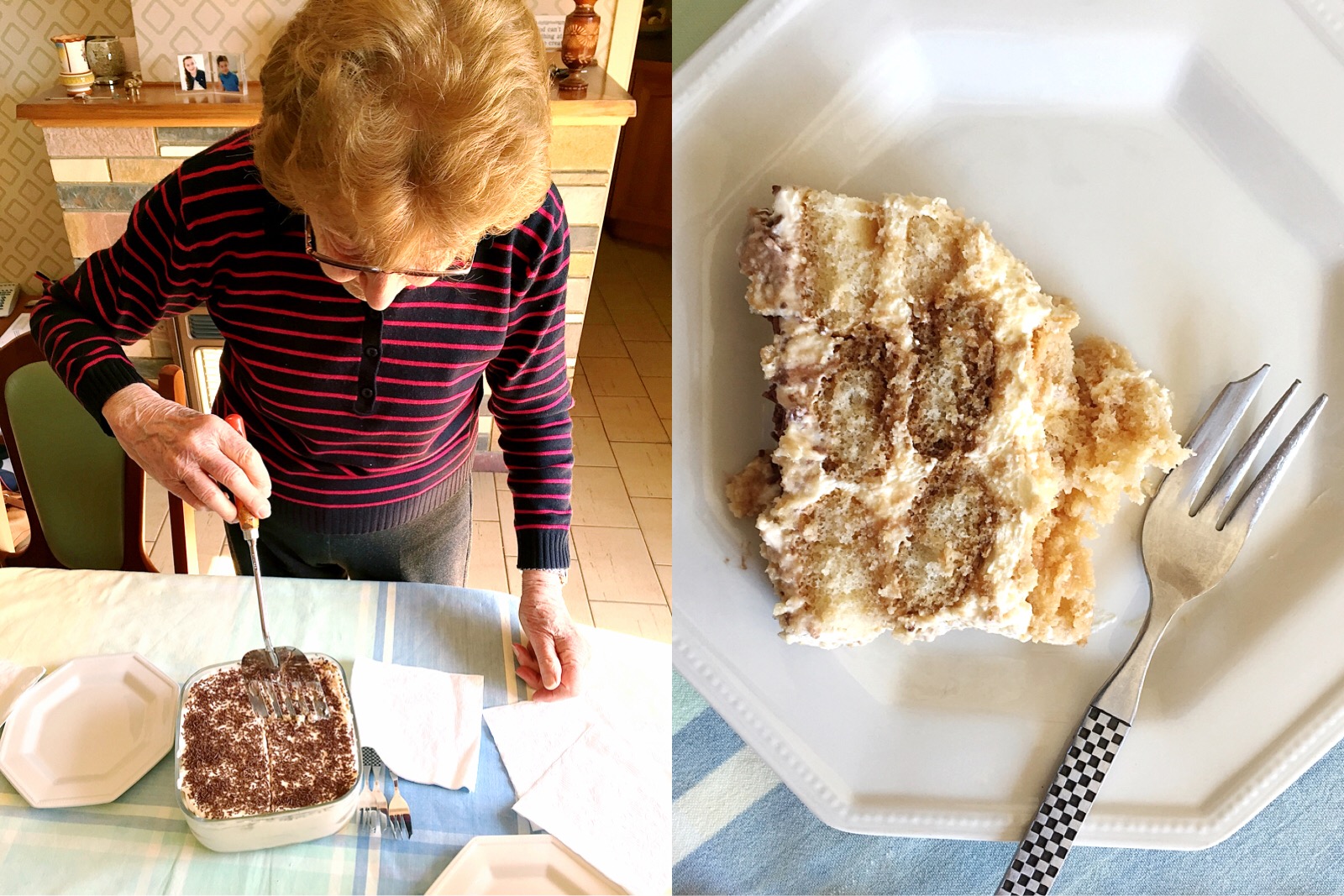 I asked santola to tell me about where she had lived in Pola and she showed me the apartment house on a large photo hanging in the hallway – just a couple of streets from where my father lived, next to the Roman arena. We talked about other polesani who had migrated here including Bibo and Iole, family friends who are in the photos above.

A couple of hours later, as if we hadn’t eaten enough sweet delights, Gemma went back into the kitchen and returned with a huge bowl of strawberries she had marinated in lemon and sugar and some whipped cream. We all tucked in and the strawberries tasted just the way I remember my mother making years ago. 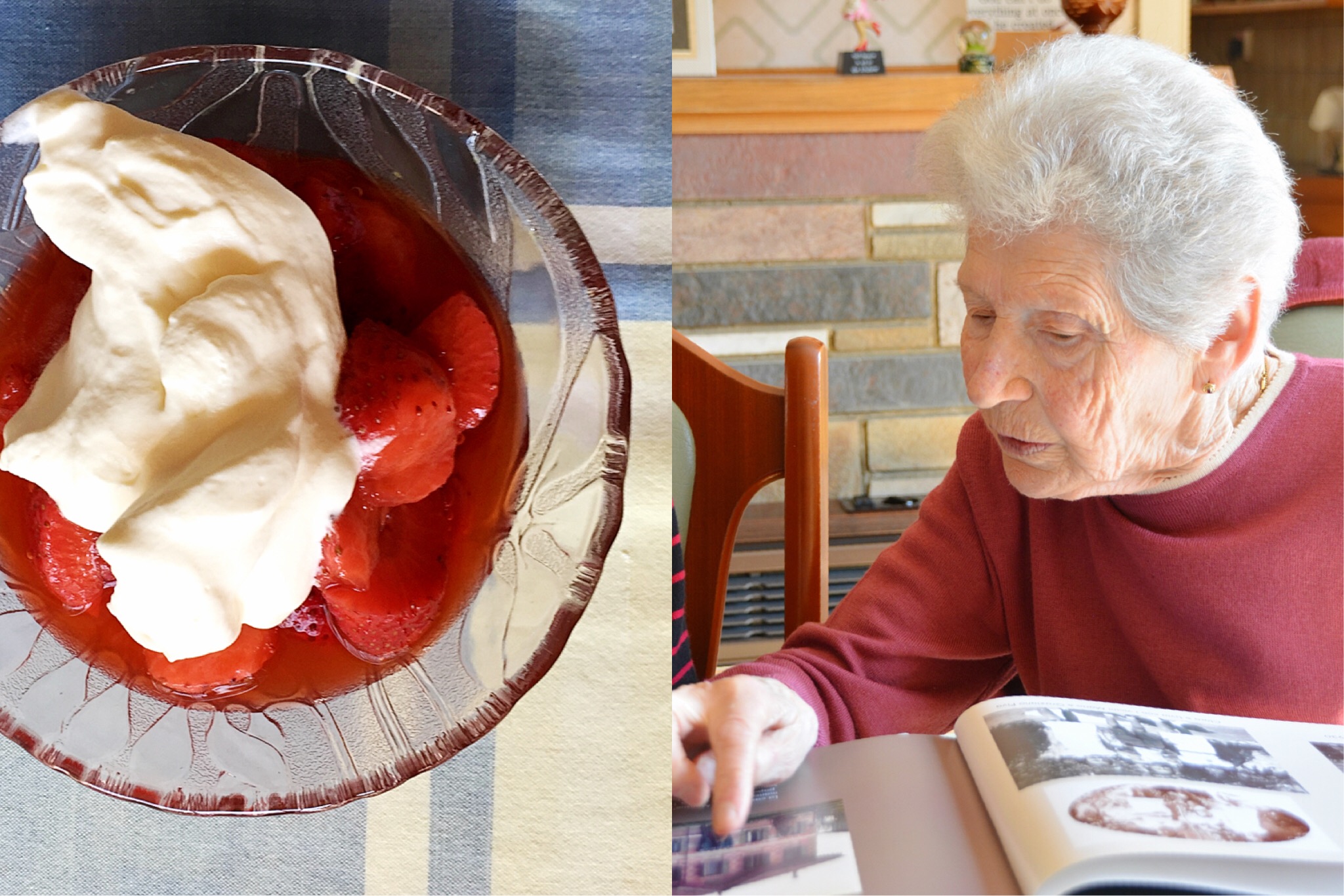 That day was sweet in so many ways – fond memories of people who had left us, stories told from black and white photos and the sharing of simply delightful desserts. And the tiramisù – it had been so long since I had made it at home. As Mark and I were planning to spend a Saturday night night at home, I thought I would make tiramisù and I got out my favourite recipe.

It is the simplest of desserts to make but you need a couple of basics: good quality cold espresso, mascarpone, eggs and savoiardi (sponge fingers). The yolks and whites of the eggs are separated, beaten and then folded through the mascarpone. This makes the tiramisu really light – if you use whipped cream, the result is quite a bit heavier. You can use more/less alcohol in the recipe below, which is adapted from the book Polpo. I have made the recipe for two people and served it in old-fashioned champagne glasses. You can double or triple it for more people – use the rule of one egg makes two serves. It is not Gemma’s recipe for tiramisù but as she inspired me to make it, I have named it after her. Mix the coffee, 3/4 of the marsala and rum (if using) with 10g of the sugar until it is dissolved. Place in a shallow wide bowl and set aside.

Place the egg white in a clean bowl and whisk until firm peaks form. Set aside.

Place the yolk and remaining sugar in another bowl and beat until pale and fluffy. Beat in the remaining marsala.

Now fold the mascarpone into the egg yolks, then once incorporated, carefully fold in the whisked egg whites.

Prepare two glasses in which you will be serving the tiramisù. Break the sponge fingers in half and dip half into the coffee mixture. Allow it to absorb some of the liquid then turn it over, allowing it to soak up a bit more. The sponge finger should soften a bit but not become too soggy. Now place the wet sponge finger in the bottom of the glass. Spoon on some of the creamy mixture. Repeat, forming layers of sponge fingers and cream, making sure the uppermost layer is the mascarpone cream. Sift on some cocoa powder, carefully cover and place in the fridge.

Allow at least 6 hours in the fridge before serving (overnight is fine).