My dear friend Ben reminds me often of the first time he tried fritole. We were 20 years old and traveling in Europe together during a break from university. We were in Venice, looking in the window of a cake shop. 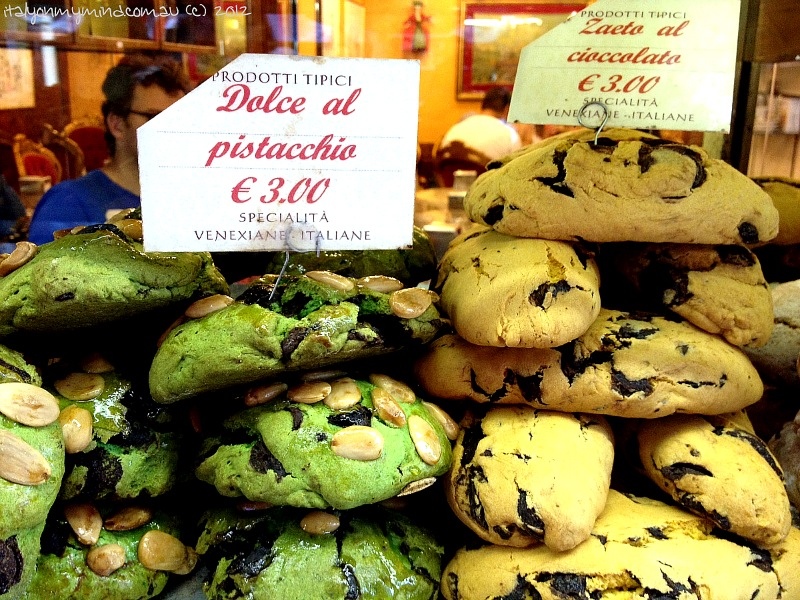 There were all kinds of delightful pastries, cakes and biscotti; there were also fritole (also known as frittole or frittelle). For me they were just these Italian tasting tiny fried balls with sultanas that mamma made at home and had made since I could remember. The ones we saw in the window that day were a bit different – they were filled with zabaglione. They were like small donuts filled with Marsala laden custard, with sugar scattered on top. I had never tried this combination of flavors so while the tastes were not new to me, the combination was. I recently asked Ben to describe his memories of the first time he tasted fritole with zabaglione and this is what he said: “crispy, soft, sweet….completely divine”.

Ben and I sometimes cook together and this weekend we decided to finally try our hand at recreating the fritole we had tasted in Venice all those years ago. We decided not to use my mother’s delicious fritole recipe (which my niece Claire put up on her blog some time back) as these ones are not meant to be filled with a cream. So I searched for a recipe that might allow the fritole to puff up a bit more and make space for the zabaglione to be piped in. I found a recipe written in Italian, and with that translated, we were set. 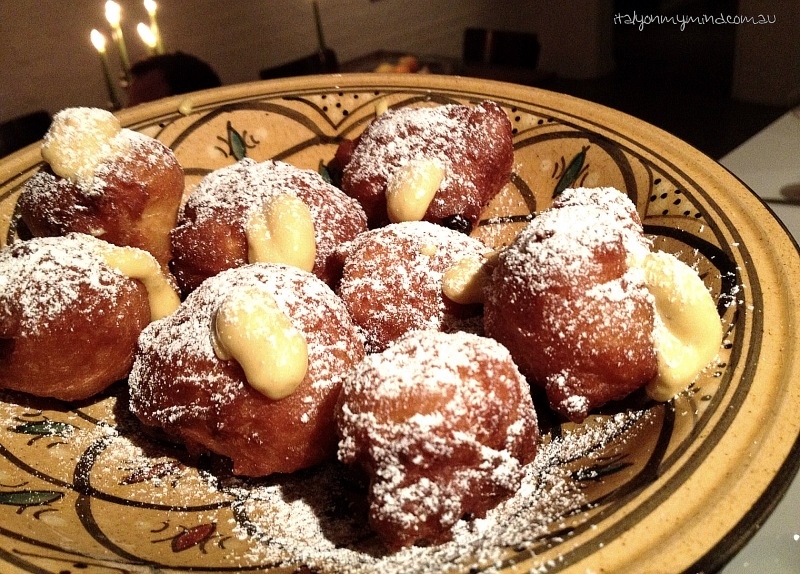 Ben made the fritole mixture and I made the zabaglione. I fried the fritole and he piped the zabaglione. We gave each other suggestions as we worked on our separate components. The deep fryer that Ben had was a bonus. It was ideal for controlling the temperature for frying though you can get by without one (my mother had a bit of a laugh when I told her – “who needs special equipment like that”, she said, ” the fritole turn over on their own once they are cooked”).

Once cooked, let them cool slightly, pipe in the thick sweet zabaglione and then dust them with icing sugar. As an alternative, you can make smaller fritole, roll them in caster sugar when they are still hot and then dip them into the zabaglione just prior to eating as I did in the photo below when I made them again at home. Whichever way you decide to construct the flavors, the result is the same – a completely divine taste sensation. 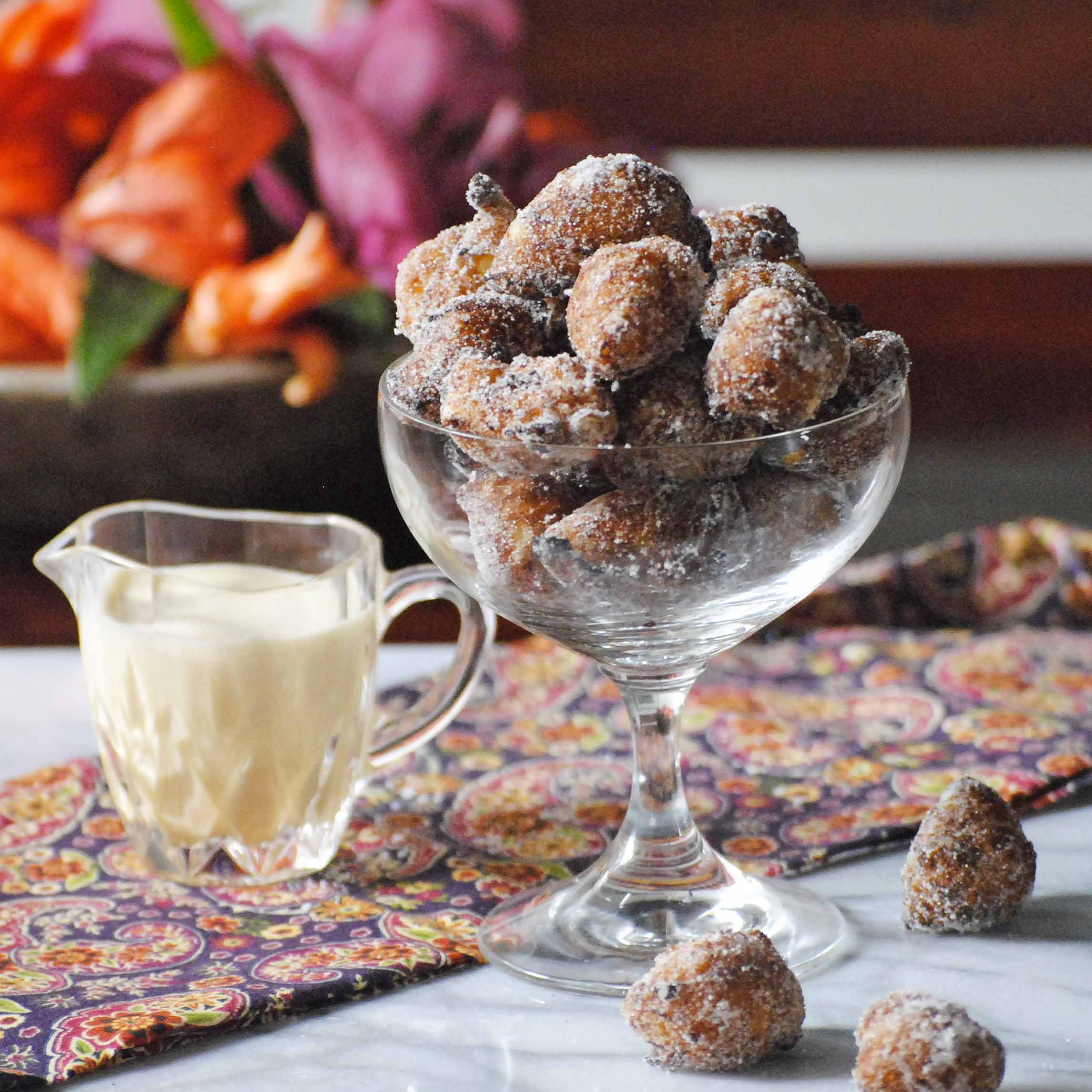 Prepare the yeast by dissolving it in a bit of warm milk, a tablespoon of sugar and one of flour (exact quantities are not important here). Set to one side.

In a large mixing bowl, place the rest of the flour, butter, egg yolks, sugar, grated lemon rind and a pinch of salt. Mix with a large wooden spoon until the ingredients are well incorporated. The mixture should be quite runny. Add a bit more milk if it is not. Add the yeast mixture and mix well. Cover the bowl with a clean tea towel and allow to rest for about 30 minutes. It should almost double in size.

Add the raisins (which you have soaked in grappa/rum for the last half hour) and pine nuts. Mix well. You are now ready to fry the fritole. Heat the oil to 160 degrees. Drop spoonfuls of mixture into the hot oil (dip the spoon in hot oil before use as it helps prevent the mixture sticking). Turn them over once one side is cooked (though they sometimes flip over as my mother said they would). Once browned, drain them on absorbent paper. 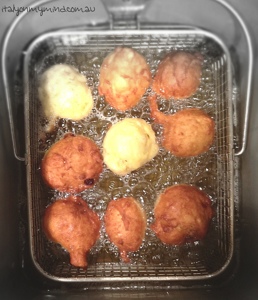 Whilst the fritole dough is resting, make the zabaglione. Beat the egg yolks and sugar until pale and creamy – at least 5 minutes using an electric beater. Place the mixture carefully in a double boiler. As it is warming up, slowly pour the Marsala in a thin stream, whisking gently the whole time. Keep stirring the zabaglione over the double boiler gently until it thickens (it took me about 15 minutes). Do not allow the mixture to boil. 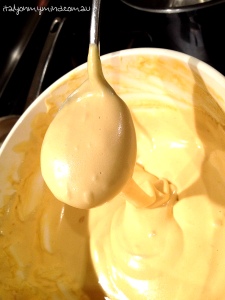 Pipe the zabaglione into the fritole using a piping bag and a small nozzle. Dust them with icing sugar. These are best eaten the same day.

Here are a few memories of Venice, in case you need more inspiration. 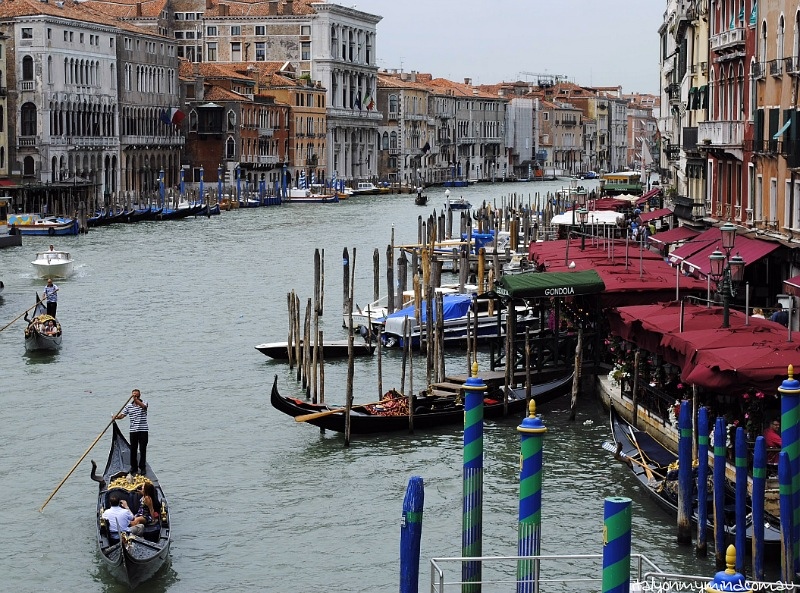